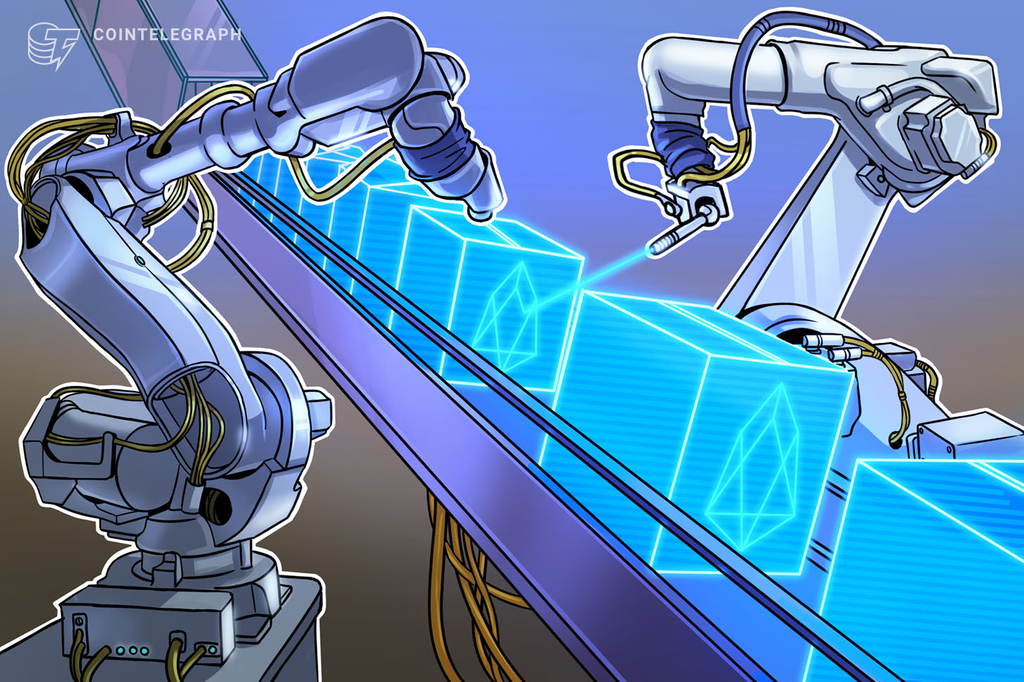 Block Producers are decentralized entities that govern the EOS network. They are responsible for reaching consensus and adding blocks of transactions or data to the EOS blockchain.

“You can almost view the Block Producers like the DJ’s of the radio station. They’re deciding what goes on the air and which callers to take.”

It is based on a consensus mechanism called delegated proof-of-stake (DPoS).

On a PoW blockchain like bitcoin, miners employ large amounts of computational power to solve complex mathematical equations. Once the equation is solved, the miner publishes the answer for verification by the other miners on the network, and consensus is reached. The block is then added to the chain, the miner that solved the equation collects his/her block reward, and everyone moves on to the next equation.

On a PoS network like Cardano, nodes stake an amount of tokens (essentially locking up tokens in a specific wallet address for a set period of time) for the chance of being selected to add the next block of transactions to the chain. Although the selection is random, factors such as the amount staked, the amount of time it has been staked and the reputation of the node are often taken into consideration.

Delegated proof-of-stake is a version of PoS, where instead of validators being chosen at random, they are voted for by the rest of the token holders on the network. Another difference on EOS specifically is that, instead of purely staking EOS tokens, Block Producers stake their investment in the network in the form of infrastructure, community support, development, etc. We’ll look at this more in-depth below.

These delegates are then tasked with upholding the integrity and accuracy of the network by coming to a majority consensus on data or transaction blocks that have to be added to the network. &nbsp;

Brendan Blumer, CEO of Block.one, the company behind EOS, describes Block Producers in the EOS.IO technology as “21 elected delegates by the token holders that are actually confirming the transactions of the network.” 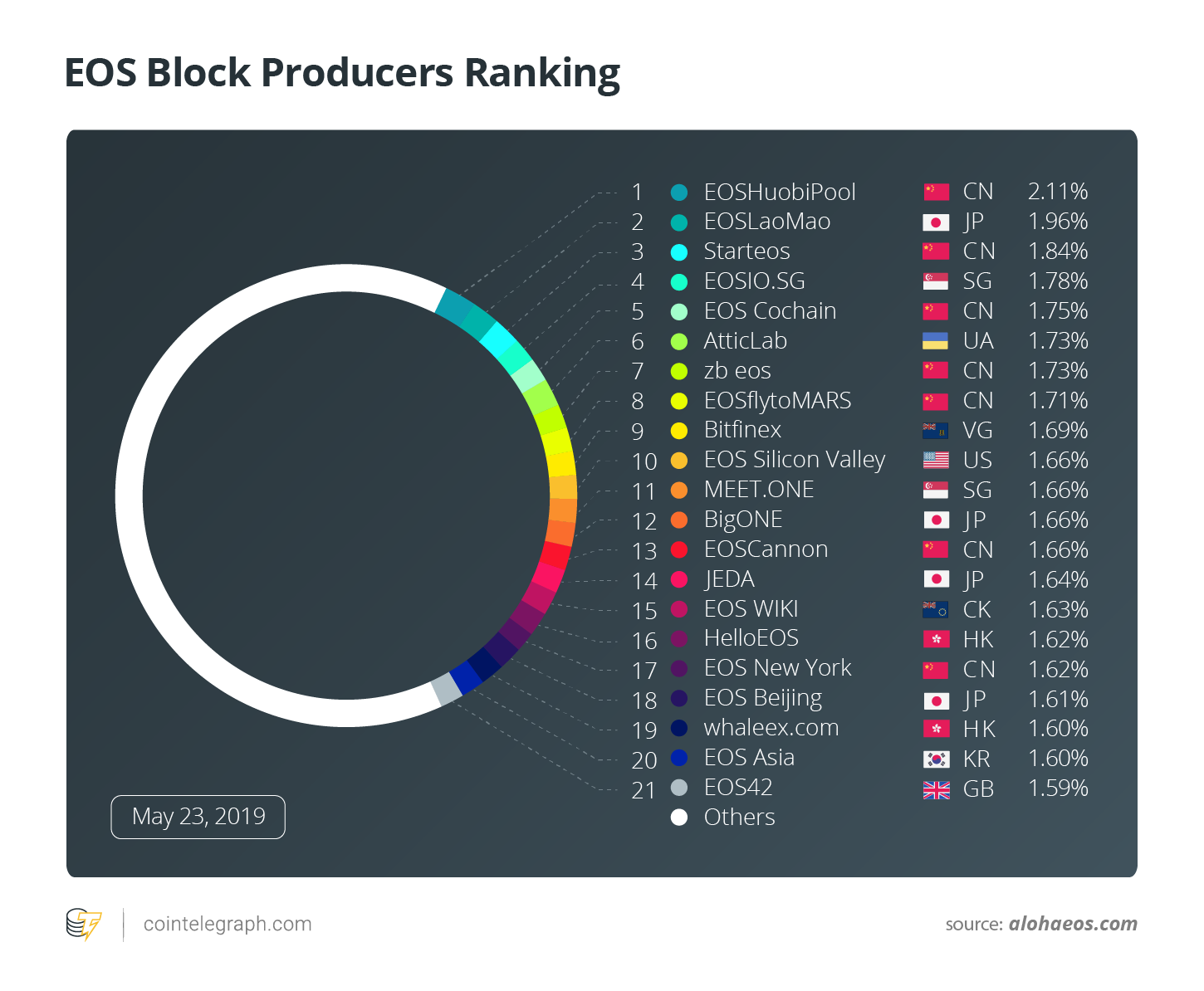 In theory, anyone who is voted for by the EOS community.

But, as we touched upon above, Block Producers are expected to facilitate the proper functioning of the EOS network and its continual growth. Therefore, they have to stake their investments in the form of data center infrastructure, community support and engagement, financial support for EOS decentralized application (DApp) developers, sponsoring education and awareness, etc.

So, although anyone can apply to become a Block Producer in theory, the reality is that the EOS community will only vote for entities that can prove they have sufficient resources to supply the infrastructure required to facilitate the proper functioning and continual growth of the EOS ecosystem.

As such, Block Producers tend to be large consortium groups, such as EOS New York and EOS Beijing, or even major crypto exchanges, such as Huobi and Bitfinex.

EOS engineer Bart Wyatt described Block Producers in a Medium post as the ever-changing brain of the EOS community:

“So the producers of the EOS.IO network kind of become the central brain of that blockchain. And it’s worth noting that that central brain is not concrete, that number of producers and the size of producers and who they are, will fluctuate over time as the community sees value in the kind of meta information about those producers changing. So if the community sees value in producers having certain hardware requirements or being in certain locations around the world to reduce latency for a round trip around the entire planet, those kinds of things will be the community acting to elect producers who fulfill their own vision of what the EOS.IO blockchain should be.”

Like with any traditional democracy, entities have to campaign for votes from the EOS community.

Unlike a regular democracy, though, in which elections are held every four or five years, votes on the EOS network are tallied every 60 seconds.

The top 21 entities that receive the most votes are chosen as Block Producers. However, because voting happens on an almost consistent basis — and anyone can be voted in or out on a minute-by-minute basis — there is also a list of 101 Standby Block Producers voted for by EOS token holders, immediately ready to fill the gap if a top Block Producer gets voted out.

So, Block Producers have to continually campaign for votes to either keep their top-21 position or to be next in line when one of the top Block Producers fail to generate enough votes.

Block Producers are rewarded in EOS tokens for adding new blocks to the blockchain.

These rewards are not paid out of transaction fees but rather through an internal inflationary system. Every time new blocks are produced for the network, new tokens are minted.

This inflation is currently set at 5% per annum, but as the EOS ecosystem matures and the value of the coin increases, the community can vote to increase or decrease the percentage as needed. 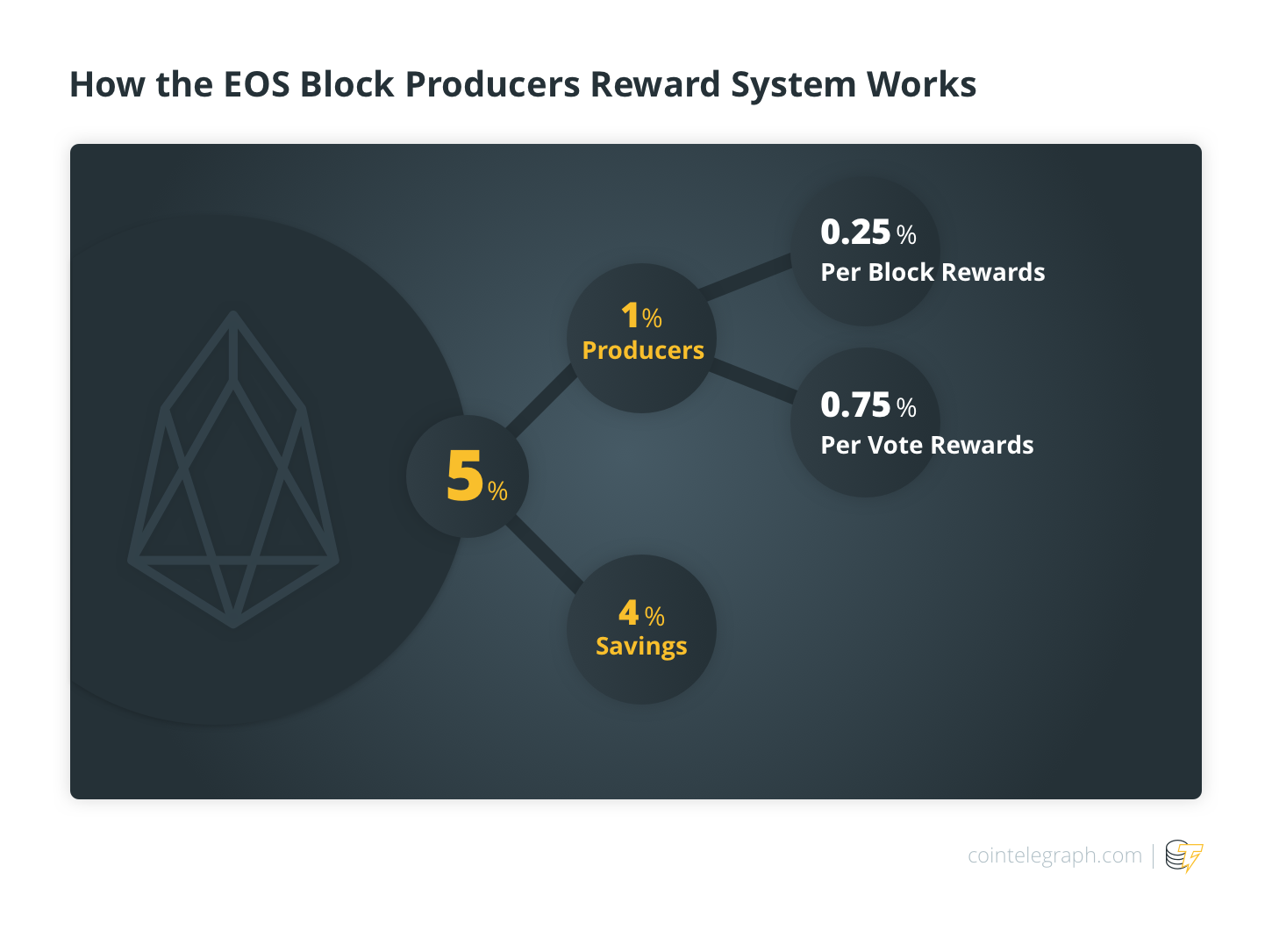 In the past, the EOS network has been forced to answer to allegations regarding this very question.

In October 2018, when the EOS mainnet was only active for five months at that point, Block.one CEO Brendan Blumer released a statement in response to a report that accused the major Block Producers of collusion and mutual voting. In the statement, Blumer pointed to the infancy of the EOS network and made no effort to deny the claims — although also not confirming them.

“We are aware of some unverified claims regarding irregular block producer voting, and the subsequent denials of those claims. We believe it is important to ensure a free and democratic election process within EOS and may, as we deem appropriate, vote with other holders to reinforce the integrity of this process,” Blumer said in the statement.

According to Ethereum co-founder Vitalik Buterin, this type of behavior does not surprise him at all, although it did happen much sooner than he expected.

“Interesting! I mean, it was completely predictable and I did predict it, but I did not expect it to happen so thoroughly and so soon!”

In November 2018, EOS came under scrutiny again when it emerged that confirmed transactions on the blockchain were reversed to restore a hacked account of one of the network users, without the account holder’s permission.