The cars were emblazoned with the slogan, “the future has come” and the partnership attracted worldwide media attention. A video from the event portentously claimed: “One day you’ll tell your grandchildren about this momentous date: April 17th, 2018; the day it all changed.”

Corey Price, the company’s vice president, predicted a glittering future. “History has proven that the adult entertainment industry plays a critical role in adoption for innovative technology,” he said, “We saw that with VHS, Beta Max, credit card payment icons and, most recently, VR goggles. We expect to see widespread adoption of crypto and blockchain in short order.”

Adult merchants are also attracted to the concept because they’re classified by Mastercard and Visa as “high risk,” and get stung with high fees and commissions, costing between 5% and 19%.

Averaging 5% to 10%, chargeback rates — where a user with buyer’s remorse gets a refund direct from the card provider — further erode profits.

And that’s only if they can get a payment processor in the first place and haven’t been abruptly cut off.

Survivors Against SESTA lists 32 financial services that discriminate against people who work in sex-related industries and adult service providers, including PayPal, Venmo and TransferWise.

There are legitimate concerns around exploitation and trafficking of course, but the end result is that cam performers denied access to payment processing are forced to work for large sites that can accept payments — but take 20% to 50% of their earnings too.

The majority of projects have either disappeared or changed direction — and most of those remaining have a market cap below $1 million. 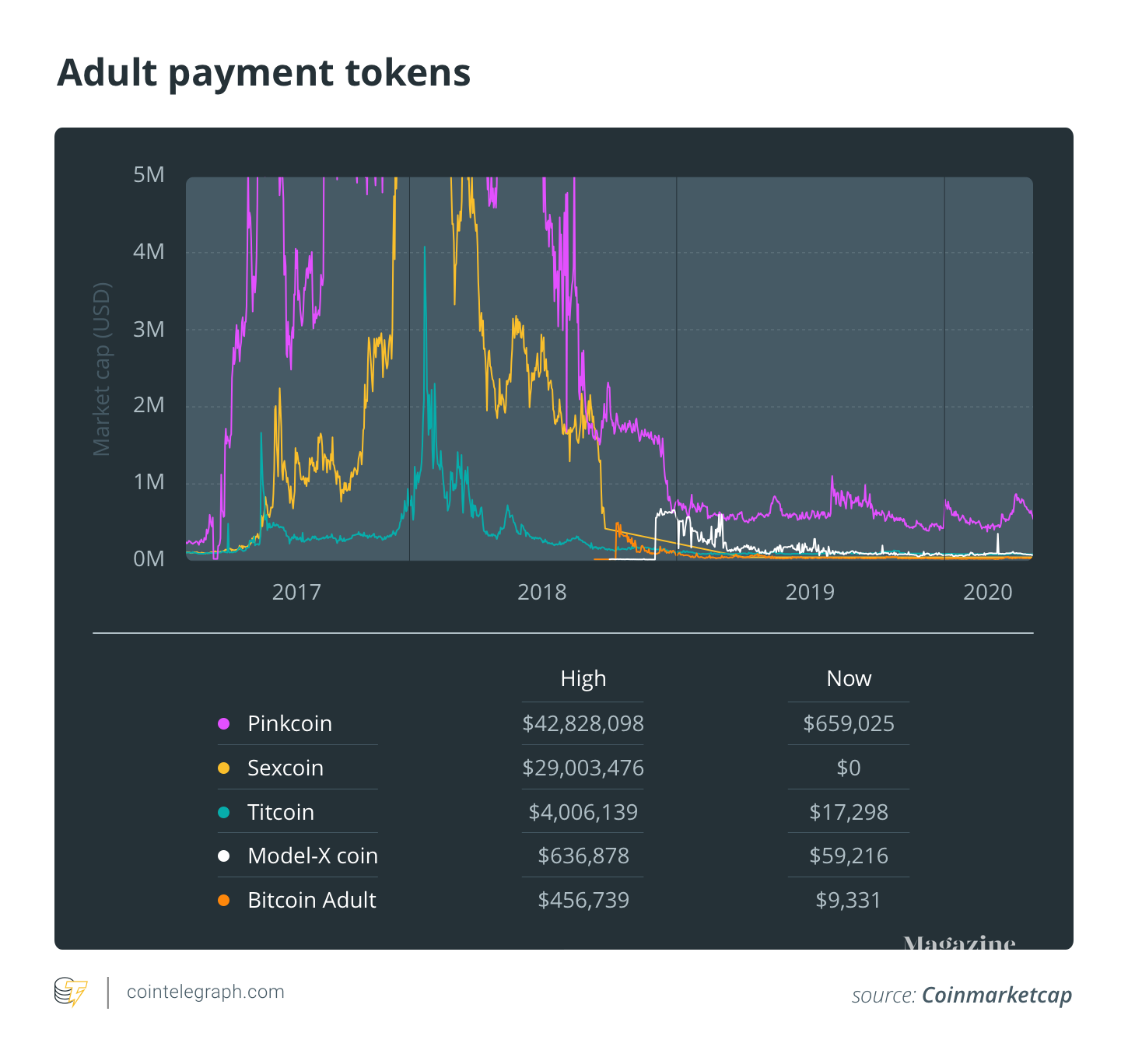 Intimate token (ITM) has since been delisted from the sole exchange it traded on, Bittrex. Many of the project’s problems aren’t unique to adult industries. It raised big expectations in its white paper and ran out of money before it could realize them (thanks, in part, to the crypto winter).

CEO Reuben Coppa said that even after shifting were moved to the Philippines to save on costs, the numbers for crypto on adult sites didn’t add up. “We were promising 1% transaction fees to be able to accept crypto and for us to even break even we’d need to be processing $3 million in transactions a month,” he said.

There were problems for users too. Those who needed to purchase crypto first had to endure a steep learning curve with wallets and exchanges as well as additional costs.

“You’re looking at a minimum of 4–5% and most of them want you to immediately upload a passport or some other form of ID,” he said, “So all these great benefits of crypto in terms of anonymity and fast transactions and cheap transactions. […] If the majority of people are coming from fiat the fees are huge and the user experience is terrible.”

“It got to the stage where I just couldn’t pitch this as a viable use case anymore. I don’t think any reasonable kind of investor could look at it and see it on that level […] unless they’re super long on crypto adoption.”

Ironically, Intimate only began offering crypto payment processing as a way to generate revenue. Coppa said they’d now pivoted back to the original concept behind the Intimate token — which is using blockchain to provide both privacy and verification.

Sex partners can verify each other yet remain anonymous

It’s called “pseudo-anonymity.” On an adult dating site for example, both users may want to remain anonymous, but they also want to know that the person they are hooking up with isn’t a creepy weirdo with a sexually transmitted infection.

Blockchain enables users to stay private yet receive feedback from those they interact with and develop a reputation score.

It could potentially help ensure the safety of escorts, who currently rely on a phone call or the tone of a text message to determine if a client is safe or not. Coppa said he was working with Toda.network to develop the technology.

“They like it from a broader perspective but they love that adult [entertainment] is an applied use case,” he said.

Another project that attracted media attention in inverse proportion to its ability to generate revenue is Spankchain. The project is still going, but its crypto-powered cam site Spank.live was shuttered in October.

Founded by “Spanktoshi Nakabooty,” the project has a token called Spank that users can stake in the “SpankBank” to earn the stablecoin Booty, which can then be spent on the cam site.

Apart from its sense of humor, performers loved Spank.live because the site only took a 5% commission, rather than 50%. More than 600 signed up.

“I like that I get to keep 100% of the payments when I use CryptoTitties, rather than losing 20% or more with fiat payment processors,” she said.

But even though she’s taken a small fortune in crypto, Awesome said few other models or clients are familiar with it.

“It’s really hard to get non crypto people to use it,” she said. “The majority of my customers don’t use crypto and are usually averse to ever using it.”

Another adult performer, Rogan Damiana, was inspired to get into the industry after seeing an online presentation by Intimate.io. Spank.live was the first site she performed on.

“It was the main site I live streamed on. My percentage of crypto income to other income would be 50%,” she said.

“It was unfortunate that the site didn’t work out, but it did teach me a lot about crypto. I use other platforms now, which definitely do take higher percentages.”

Even though Spank.live was built entirely around crypto payments, she said that only about 5% of newcomers could be enticed to open their first crypto wallet.

Buying crypto is too much hassle for “old dudes”

There are hopes to resurrect it, but for now, Spankchain is focusing on its crypto payments gateway SpankPay.

They’ve also just launched a crypto wallet for performers and have plans to launch a linked debit card that converts crypto directly to fiat.

“Our number one challenge is really models just don’t give a shit about the technology,” she said, “they just want to hit a button and get their money. So this is really going to solve that.”

He took Bitcoin off the site, but when he created his new social-media-meets-porn site JustForFans, he started taking crypto payments once more, first through Coinbase and now SpankPay.

He loves the low fees (0.5%) and lack of chargebacks: “I wish we could go crypto only, but that’s not realistic,” he said.

But Ford has found another use for digital currency: paying his models. Of the 9,000 or so on the site, he pays 550 of them using cryptocurrency, mostly to avoid international bank fees.

For example, rather than paying $15 to transfer money via a bank to a model based in Canada, he instead transfers Bitcoin to their Shakepay wallet. “Services like ShakePay let us pay them via BTC, and they can do a local transfer of funds to their banks with no fees. So in the Canadian market, crypto is helping us pay into bank accounts at lower costs to our models,” he said.

Ford is so impressed with its potential he says he’s building “an entire infrastructure to make international payments easier.”

“It will use crypto as its backbone but will transfer to local currencies for payouts. We hope this will be in place in the next few months.”

“We saw a significant increase in payouts in Verge, which informed our decision to recently add Tether to our roster of sex worker-friendly payout methods,” he said.

He said around 10% of models were now being paid with cryptocurrency, with the rest taking direct deposits, checks or other forms of money transfers.

But there’s been no increase in the number of users paying with crypto. “The percentage of users paying in crypto has remained fairly steady since we introduced it as a payment option,” he said.

That could finally be about to change, now that its long awaited partnership with crypto payments startup PumaPay has finally come to fruition.

PumaPay takes its time, but will it get it right?

“They are very well known and very well connected in the adult entertainment industry,” said CEO Yoav Dror. “We chose to work with them and they opened doors for us with many of our early adopters.”

Pumapay has about 100 partners eager to use their payment solution – about 60% of which aren’t in the adult industries.

Unlike some of its competitors that rushed to market and floundered due to a lack of funds, PumaPay raised $117 million privately, which has given it the time and space to develop and refine its technology with end users in mind.

Dror believes they have solved a number of the barriers to adoption and said that even after they fulfilled the promises in their white paper back in September, they kept adding crucial features “that were not in the original white paper but things we understand we need to have, to have adoption.”

But their most unique feature is enabling users to sign up for ongoing subscriptions — like one would with Netflix or Spotify — using cryptocurrency.

“Before, the only way for you to transfer cryptocurrency was the equivalent of using cash,” he said.

“What we did is mimic the mechanical payments, where you give a third party or business the authority to charge money from your accounts, […] which allows payment methods that were not possible before, most notably subscription payments which is one of the most popular payment methods today.”

Their solution also allows for “top up” and “one click” payments along with “pay per view” and “pay per time.”

The PullPayment Protocol (which requires the use of PumaPay tokens) first went live on the online adult virtual community Red Light Centre community in November.

If everything goes as planned, non-crypto users will also be able to pass Know Your Customer verification in the app and buy cryptocurrency with a credit card before the end of next quarter.

“This is something that wasn’t there when we wrote our white paper but it’s a must because otherwise we have to send customers to an exchange […] which is a very lengthy process.

“By allowing them to buy it directly we make the whole product much more usable for them.”

Transactions are free (apart from the gas fee), and PumaPay will make money in other areas such as credit card purchases and by converting crypto to fiat for merchants.

Dror said he’s a true believer in the power of crypto to transform adult payments.

“There were some projects there that were just there for the money and they’re gone. But we are here for the challenge. I don’t want to sound idealistic but there is a real problem that we can fix and we are working very, very hard in order to solve it. We take this very, very seriously. And I really, really hope that we will be successful.”

He said the ramifications of PumaPay succeeding could be massive for crypto adoption more generally.

“I believe the adult entertainment industry has the magnitude and power to lead this change. The industry is so big, there are so many people and so many transactions that this industry alone is enough to take cryptocurrencies beyond the tipping point and make them mainstream.”

Based in Melbourne, Andrew Fenton is a journalist and editor covering cryptocurrency and blockchain. He has worked as a national entertainment writer for News Corp Australia, on SA Weekend as a film journalist, and at The Melbourne Weekly.

Tokenomics is the art of influencing behavior through token design incentives.