Why poker players are so prevalent in the crypto industry — and the intriguing possibility that Satoshi stacked chips before he/she/they stacked sats.

If there’s one profession well represented among the ranks of wealthy Bitcoiners, it’s poker.

Many pro players started using Bitcoin to play online in the run up to the first major price boom in late 2013 and some have huge stacks of coins squirreled away.

“There are some high stakes players that have a lot of Bitcoin exposure,” he tells Magazine. “I know some poker players that are holding Bitcoin worth millions.”

Bryan Micon, the famed promoter of the first US Bitcoin poker site Seals With Clubs says there are plenty of players who made more money out of Bitcoin than they did from their poker careers.

“Absolutely,” he says. “There were 1,000 coin pots being played in the early days, and the ones that decided to cash out and save them changed their whole lives.”

Phil Ivey, who has won over $30M in live games alone, is known to have advised Virtue Poker, a ConsenSys-backed blockchain startup, while Bitcoin Foundation board member Bobby Lee played in the 2018 World Series of Poker Main Event.

Most keep their holdings private, but occasionally details surface in public. In 2017 player Dietrich Fast revealed he’d amassed 750 Bitcoin worth $5.5 million, while former professional Alex Copenhagen admitted in a YouTube video that he’d lost half a million dollars trading crypto in 2019.

Was Satoshi a poker player?

Surprisingly, the relationship stretches back to before the Bitcoin white paper was released. The original 0.1.0 Bitcoin code included scraps of code for an online poker game, added on April 16, 2008.

It raises the intriguing possibility that Satoshi Nakamoto may have been a poker player trying to find a way around laws introduced two years earlier that banned financial institutions from dealing with online gaming sites. 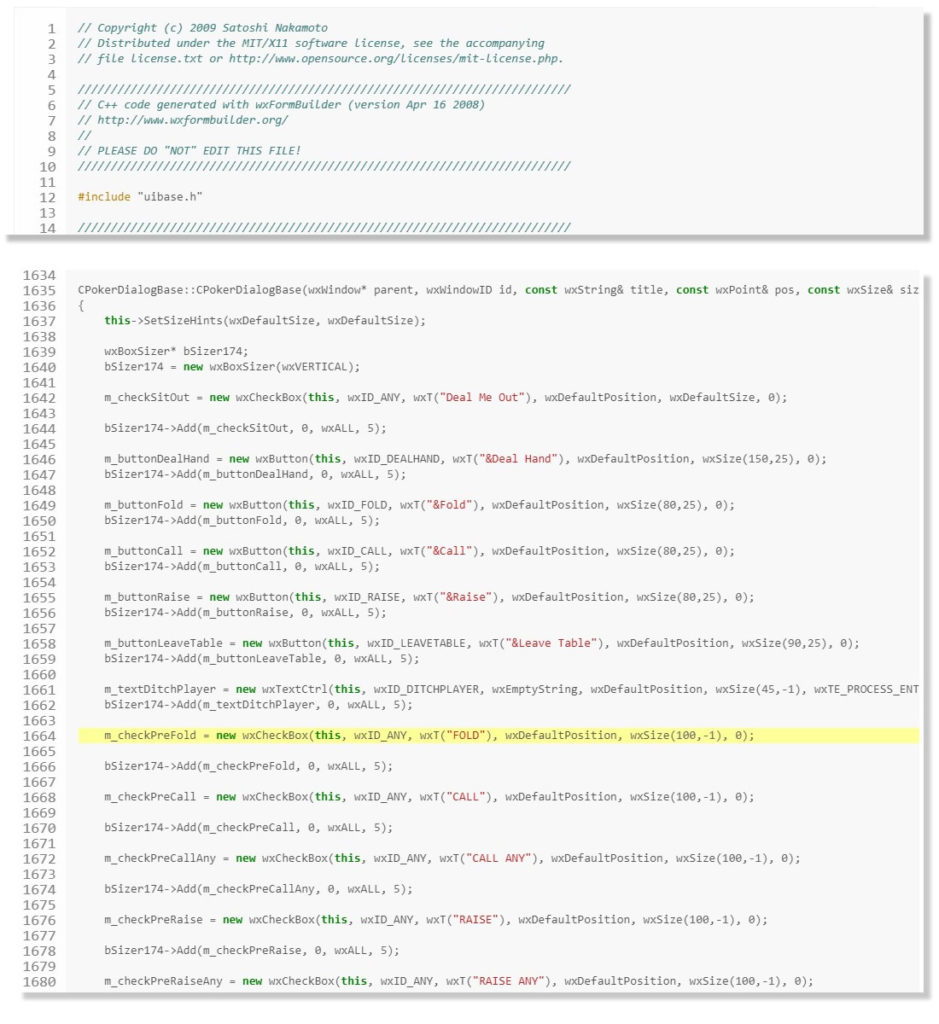 Online poker thrived in the years leading up to 2006’s Unlawful Internet Gambling Enforcement Act (UIGEA), with the industry growing exponentially from $82.7 million in 2001 to $2.4 billion by 2005.

A key moment came in 2003 when Tennessee’s Chris Moneymaker won the $2.5 million pot at the annual World Series of Poker, despite never having played a real-life tournament before in his life. PokerStars had paid the $10,000 entry fee for Moneymaker and 36 of its other top online players as a way to promote the site.

But the UIGEA forced online poker into the arms of the shadow banking system, where transactions needed to be disguised. A Department of Justice release from the time shows the three main sites passing off transactions as clothing, jewelry and sports equipment purchases.

Moncada recalls it seemed pretty dodgy. “When you wanted to cash out of an online poker site, you would get some random check from some LLC in Dubai or something,” he recalls. “It was clear that shady stuff was going on.”

The ‘shady stuff’ continued for five years until April 15 2011, a day that’s gone down in history in the poker world as Black Friday. “Black Friday was when the hammer dropped,” Micon said. “It brought it all down.”

The domains of the three major US online poker sites were seized and eleven individuals associated with PokerStars, Ultimate Bet/Absolute Bet, and Full Tilt Poker were indicted in the US District Court for the Southern District Of New York. Online poker effectively shut up shop in the U.S.

Some poker players who had stored their winnings on the sites didn’t see the money again for years – if at all. Players moved to Canada or South America to continue plying their trade. Things looked grim indeed – until Seals With Clubs emerged in 2012. It was a pretty rough and ready site from all reports, but it offered Bitcoin as its primary currency option.

Not the founder, just the public face

Micon is widely credited in media reports as the site’s founder, though he tells Magazine he was merely in charge of marketing. He’d stumbled on Bitcoin a few months after Black Friday while reading media reports about the Lulzsec hacks. The hackers stole data and defaced a bunch of websites, most notably Sony’s site. They had a Bitcoin address calling for donations.

“That really set off an explosion in my brain,” he recalls, adding he was fascinated to find out how the group expected to receive donations when law enforcement agencies were watching their every move.

“That’s when I started reading and I haven’t stopped since.”

Micon shouted about Bitcoin from the rooftops and is proud that “a very big swathe of poker players were exposed to cryptocurrency because of some of the efforts I did in the early days.”

“I essentially did everything I could. I was just the crazy guy screaming in the streets ‘Hey look at Bitcoin, you can play poker with it too’.” Micon sent friends and associates a Bitcoin each, worth $5 to $10 at the time, so they could try out the site.

“Every month or two a friend messages me to say ‘Hey you gave me my first Bitcoin and I saved it’, or ‘I gambled it and turned that one Bitcoin into seven and then held it for four years’.”

“They always have some crazy story of some pretty big come-up, generated essentially from a guy flipping them a $5 chip seven years ago.”

Moncada saw Micon posting on Facebook about the site in 2013 and was intrigued enough to buy a Bitcoin for $90 and start playing. He estimates there were fewer than 50 professional players using Bitcoin poker sites in 2013. This meant he could clean up against the amateurs.

“I realized these guys were really bad players,” he laughs. “I only put in one Bitcoin and three months later I was at 150 Bitcoins. I cashed out about $10,000 and kept about 50 Bitcoins in there and kept playing. And that’s how I found my way into Bitcoin.”

The speed and ease of cashing out was the major revelation.

“I cashed out some Bitcoin through Coinbase and it took about 48 hours to hit my Chase account. And that’s when I realized ‘Wow, I like that’. I don’t know what this Bitcoin technology is, but it basically circumvented all these U.S. Government efforts to prohibit people from moving money in and out of websites.”

He says cryptocurrency knowledge filtered through the poker community across 2013 and 2014. International players began to realize it was easier to transfer their stake money via Bitcoin than fiat across borders, particularly as some tournaments cost up to $50,000 to enter.

“So it became a remittance tool for these high stakes players that were coming in internationally. A lot of them realized the value of it and started investing in it,” he says. “I did notice that probably around 2015, a lot of poker players that I knew were holding Bitcoin already. By 2016 everybody knew about Bitcoin in the poker world.”

Moncada says there are plenty of similarities between trading crypto and playing poker – not least because 95% of participants in both lose money, while 5% clean up. And poker is a great background for traders, he explains.

“As a poker player you learn to deal with the swings. You can play statistically perfect poker, make all the right decisions, but bad luck can just kick you in the balls,” he says.

“And you’ve got to be able to make it through those bad stretches where you have very little control. That’s an incredible training ground for crypto volatility. Because crypto just like kicks you in the balls non-stop.”

Micon’s painful moment came in February 2015, when armed police raided his home and served him with a warrant from the Nevada Gaming Commission. The website was voluntarily shuttered and Micon was charged with operating an unlicensed online poker room from Las Vegas. He’s vague and non-specific about the details of the incident and the plea bargain he eventually struck. Other media have reported that his lawyers advised him not to speak about it in public.

“A bunch of fascists pointed guns at me and terrified my family over the matter,” is how he characterizes the incident. “The legal action, that was enough for me. Everybody does their own risk, reward calculation and that was a clear fold for me at that time.”

The experience may explain why he gets in touch again after the interview asking for a mention of freeross.org, a site aiming to encourage clemency for Silk Road founder Ross Ulbricht, currently serving a double life sentence in prison — plus forty years. “It’s very important to me,” he says.

Stuck at home during the coronavirus crisis, he started playing online poker again for the first time in ages. “All the deposits and withdrawals are in Bitcoin, Ethereum and half a dozen others,” he reports. “Just about everywhere for online gambling accepts it now.”

While Bitcoin and cryptocurrency has matured in ways he couldn’t even imagine back in 2011, some sites still remind him of those early days. “BitMEX to me feels a lot like early online poker sites,” he said. “A lot of people are firing at it, most aren’t very good. Most are just sailing in without much thought and without much strategy.”

On April 9th 2020 Ed Moncada will play against some of the biggest names in the cryptocurrency industry (and the lowly editor of this publication) in the Crypto Vs Covid charity poker tournament.

Organizer Alex Wilson, from crypto charity The Giving Block, says online poker is the perfect way to get people feeling good about a charity event – especially when they’re confined to their homes during the crisis.

“It’s a little more engaging and a way to get people more involved and talking about it,” he says. “And it’s a great way to get influencers to do something they actually enjoy doing and kind of promoting it in the process.

“It’s a pretty significant donation for sure,” Wilson says.

The Crypto Vs Covid Charity Poker Tournament is on April 9 at 8pm EST and is open to all.

Update: a previous version of this article suggested that Seals With Clubs was seized. Bryan Micon notes that it was voluntarily closed and players were offered the chance to cash out balances for six months.

Based in Melbourne, Andrew Fenton is a journalist and editor covering cryptocurrency and blockchain. He has worked as a national entertainment writer for News Corp Australia, on SA Weekend as a film journalist, and at The Melbourne Weekly.

DAOs aren’t just a way for big DeFi protocols to manage megabucks — anyone can set one up easily for better online collaboration.