"Cryptocurrency creates something of a meritocracy where creativity and determination are king." 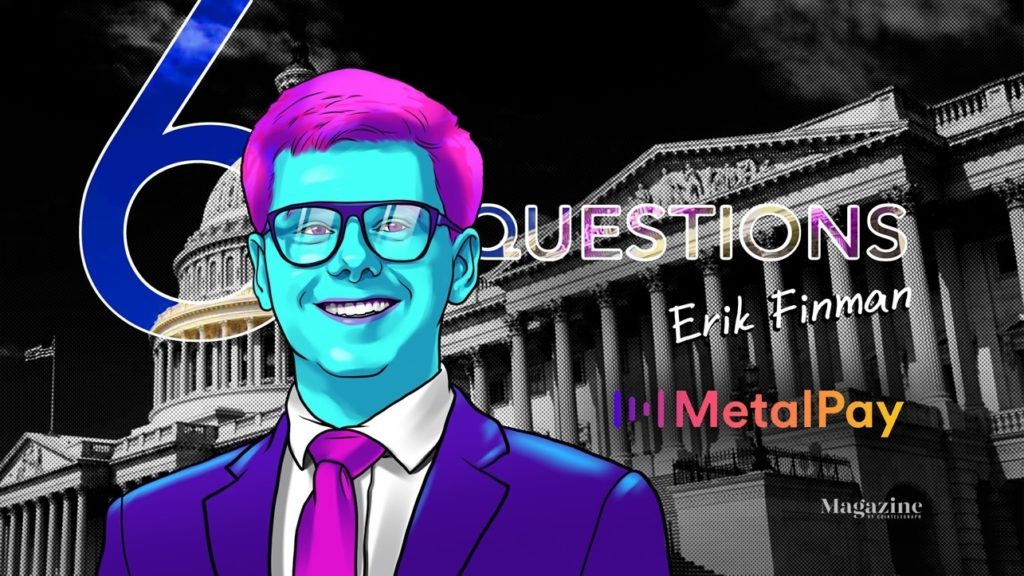 This week we talk to Erik Finman, a 21-year-old entrepreneur and investor based in Washington D.C.

Erik took his first step into cryptocurrency with a $1,000 investment in Bitcoin in 2011. By the age of 18 he had become the world’s youngest Bitcoin millionaire, and was named TIME’s Most Influential Teen.

Since then he has tackled an educational mission financed by NASA, wearable robotic exo-skeleton prototyping, and he now works with the cryptocurrency company Metal Pay.

Erik has recently proposed The Cryptocurrency Act of 2020, game-changing legislation that clarifies which federal agencies regulate which type of crypto assets. Erik believes this bill will allow the U.S. to take the lead in the cryptocurrency revolution, and that the cause is gaining new supporters on a daily basis.

1 – What has been the toughest challenge you’ve faced in our industry so far?

I’ve met so many brilliant and creative people in the tech world. Unfortunately, there’s still a very prominent old guard who are particularly resistant to change. Even in crypto you see people stuck in their old ways, refusing to adapt and evolve.

You can try your best to get people to snap out of their backwards beliefs, but often they’ll just double down; this is definitely the case for crypto. Sometimes I wish I had the sunglasses from They Live, I’ve met quite a few people who could use them! Despite this, I’m confident that the most creative thinkers will win out in the end.

2 – What’s the most interesting place you’ve ever visited, and why?

There’s value to be found all across the world, from the rural to the urban, but one location that stands out in my mind is Singapore. They’ve done everything in their power to be a technological powerhouse. Everywhere you go you see signs of the future, and this is totally reflected in their uniquely pro-crypto stance. I’m not sure what struck me more, the fact that I bought my coffee with Bitcoin or the fact that there’s no gum on the sidewalks. Both are truly sci-fi level achievements.

3 – What does ‘inclusion’ in the blockchain industry mean to you?

From the beginning, cryptocurrency prioritized people willing to think outside of the box, no matter what their background was. This allowed all sorts of people to gain a strong foothold, from the usual American techies to villagers in rural Botswana.

Cryptocurrency creates something of a meritocracy where creativity and determination are king. After all, I was only 12 when I bought Bitcoin, and I can promise you it would have been a lot harder if I had to go to a bank or investment firm to do it. Not saying I couldn’t – I think I actually looked pretty sharp in a suit for a pre-teen.

4 – If you were to retire today with $5M in liquid assets, what would you do with your time?

In all honesty, I’d be bored. Maybe I’d take up a new hobby like water skiing. Something fun that looks good for my Instagram (very important). I can definitely picture myself skimming the waves, listening to the new Kanye album whether it’s good or bad, nothing to stop me… except falling over.

Ultimately, wealth will always take a backseat to impact for me. Crypto gives you the ability to change the world, and I want to take full advantage of that.

5 – If you could have any career you wanted, what would you be doing?

I’d love to devote my time to starting a multi-purpose foundation that helps those most in need. I don’t like being cooped up in an office, and I want to meet people who you don’t ordinarily get to see in the halls of the Capitol or the kombucha bars of Silicon Valley.

I think the Bill and Melinda Gates Foundation is a perfect example of just how much impact people in tech can have when they take a step back and look at less flashy problems affecting the world, and I take a lot of inspiration from them.

6 – What do you think will be the biggest trend in blockchain for the rest of 2020?

I think it’s quickly become obvious that the word of the year for blockchain is “coronavirus”. We’re experiencing rough terrain, but in my opinion this will be a new trial by fire for much of the crypto world. I expect the technology and the users to come out stronger than ever in the end.

Erik chose to replace questions 3 and 4 … so next week we’ll ask:

What talent do you lack, and wish you had? How would you use it if you had it?

What’s a problem you think crypto has an opportunity to solve, but hasn’t been attempted yet?