6 Questions For Aubrey Strobel of Lolli 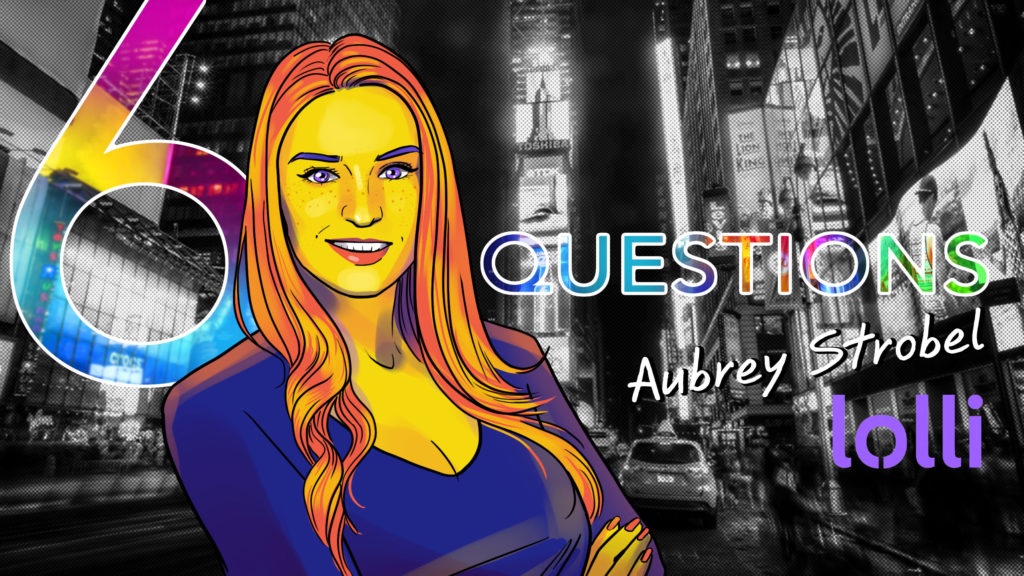 This week we caught up with Aubrey Strobel, who is the Head of Communications at Lolli, a shopping rewards company that allows people to earn bitcoin when shopping online at 750+ top brands and stores. At Lolli, Strobel leads the company’s external & internal communications.

Prior to this, Strobel was a Senior Account Executive at Wachsman, where she led multiple high-profile blockchain industry accounts including Dash, tZERO, and CoinDesk – including support and logistics coordination for CoinDesk’s flagship Consensus industry conference series.

Before that, she worked at BerlinRosen, where she supported public affairs and advocacy work for clients focused on criminal justice reform issues. She’s also a former broadcast news journalist for KRWG-TV in Southern New Mexico and West Texas, and she reported on the US/Mexico borderland as well as the 2016 Presidential Primary Race before transitioning to her communications work.

And by the way, Lolli’s Twitter feed happens to be one of the funniest and smartest on the platform – at least in our opinion!

Which startup – or startups – have the best chance of succeeding in blockchain today, and why?

I’m a fan of Lightning Labs. Startups that will be successful will provide experiences that are valuable, not requiring their users to change their daily habits. The UI should be seamless and people shouldn’t realize the product or service they’re interacting with is operating on a blockchain.

What is the point of sending humans to the moon?

Well, Neil Armstrong was able to confirm that it’s not made of cheese. We also got to see Buzz Aldrin punch a conspiracy theorist in the face. I think it’s fascinating to look back at our planet and realize how small we actually are and that time is fleeting. We also beat the Russians there, so that’s pretty cool.

What has been the toughest challenge you’ve faced in our industry so far?

I started out in crypto when it was just “bitcoin.” It wasn’t easy getting the mainstream media – or my parents – to understand or even remotely care about what I was doing and this industry on any level. It took a lot of work educating reporters who were forced to cover a burgeoning industry that they had never even heard of.

What do you drive… and what would you drive (or what other mode of transport would you use) if you had no restrictions on your choice?

I’m from the Southwest. I had way more room to drive than I do now. I’d love to drive a ‘65 Mustang. Now that I live here, I depend pretty heavily on public transportation, but I wouldn’t mind a chauffeur driving me around the city so that I never had to take the subway again. And would like a sidecar jetpack attached if we got caught in traffic.

What does ‘inclusion’ in the blockchain industry mean to you?

This industry has a strong community and I believe it’s pretty welcoming. Bitcoin, by its nature, is all-inclusive.

On the other hand, conferences are the least inclusive in space and need a lot of work. Organizers should invite more than a few women as speakers for main stage keynotes and panels. I’m also very tired of a designated “women’s panel” where the questions are mainly targeted around their gender and how it feels to be a woman in the industry. Ask tough questions and hold us to the same standard as any man in the industry.

If you were to retire today with $5M in liquid assets, what would you do with your time?

$5M isn’t that much to retire with nowadays. But if I retired, I‘d set up a non-profit called the First Day Foundation, meant for inner-city public school students who don’t have new clothing to wear on their first day of school. We’d also provide backpacks, books, and supplies to make sure every child feels as equally prepared as others. My parents were public school teachers and their devotion to their students and education inspired this idea. With whatever I have leftover, I’d use it to travel through Africa and Asia.

Aubrey chose to replace the first two questions… so next week we’ll ask:

What you think the biggest scam in crypto is right now?

If you could have a conversation with anyone dead or alive, who would it be?