6 Questions for Josh Frank of The TIE

"I don’t know how so many companies in this space can live with themselves knowing they screwed retail investors out of money." 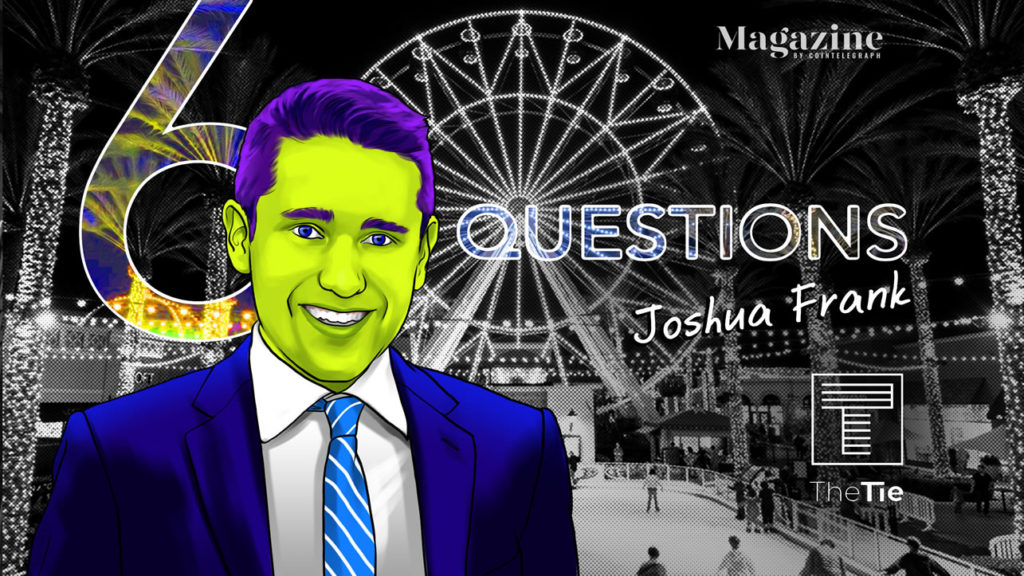 This week our 6 Questions go to Josh Frank, co-founder and CEO at The TIE.

The TIE is a leading provider of alternative data for digital assets, and provides actionable intelligence to a wide spectrum of institutional investors and enterprise clients.

Prior to this, Josh worked as a consultant at SS&C Technologies where he helped develop post-trade technological solutions for the world’s leading custodians, brokers, and asset managers.

Identifying a lack of trusted and transparent data and technology in the digital asset space, Josh decided to leave his role at SS&C to build The TIE full-time in March 2018.

1 — Thinking of a favorite song or poem, what are the words that move you; and why are they important?

I am a massive music fan, but I honestly don’t really get moved by songs. I also don’t think I have read a poem since 4th grade. Here are a few artists you need to check out though:

Also this… I don’t think any explanation is needed.

As I parse through places 50-100, I can’t believe some of these coins still exist. Many of these projects have no users and no utility. Can someone justify to me how the Bitcoin Diamond network is worth more than $100M? I really wish our industry did a better job at focusing on the projects with real traction and in actively calling out scams.

Whenever I take a look at any cryptocurrency I still ask myself the question — does this project need a token, or did they just raise via an ICO because they couldn’t raise capital via traditional means? If they didn’t need a token and they have no users, why should they have any value?

We released a research report on the most overhyped cryptocurrencies on Twitter. Many of the assets that we covered are effectively now “dead coins”, but a few remain in the top 100. Shocking to me.

3 — What’s your biggest regret about your time in the blockchain business so far?

I honestly don’t like to have any regrets. I made countless mistakes when I first started my business and I continue to make mistakes, but I have taken all of them as learning experiences to get The TIE to where it is today.

If you want my cliché “should have, would have, could have” answer — I wish that I bought Bitcoin in 2014 when my co-founder Ben was doing short-term BTC loans on Bitfinex.

On the other hand, the best decision that I ever made was making the decision very early to never ICO, even though it was extremely tempting when we were undercapitalized and first starting in 2017-2018. I don’t know how so many companies in this space can live with themselves knowing that they screwed retail investors out of money, gave them a token they knew was useless, and are now building profitable businesses that those token holders will never benefit from.

So many Chuck E. Cheese tokens left in this space.

I am convinced Dua Lipa and I were meant to be together. Don’t think that one is going to happen though.

I like to think the reason is because of the pandemic, and it’s just hard with her being in London and me being stuck in California. Maybe next year.

5 — What’s the most embarrassing mistake you’ve ever made in public?

When I was a freshman in high school I was biking down a big hill in my town and saw a girl I had a crush on. I wanted to stop to talk to her, but accidentally fully pressed down on my front brake rather than the back brake. I flipped over the bike and broke my front tooth right in front of her. Funny memory. Didn’t end up with the girl but I do have a mostly plastic tooth.

6 — What will happen to Bitcoin over the next ten years?

I don’t know what will happen to Bitcoin tomorrow, let alone in ten years. I do think that Bitcoin has tremendous value as a risk-off asset and I think many of the properties of Bitcoin — limited supply, immutability, decentralized, etc. — will lead to significant growth in the years ahead. Bitcoin is the only cryptocurrency that I hold and I don’t plan on selling it.

I am confident in saying that central bank digital currencies will definitely be mainstream in ten years time and that stablecoins will see significant growth.

Who is your dream hire for the company you work at today?

From smart contracts, to DAPPs, to NFTs, to DeFi we have seen so many of the next “killer apps” for crypto, but none have really taken off quite yet. What will actually stick?