"Notions of Japan as an animistic spirit-infused realm in which humans can commune with animals and other objects and forces of nature are ubiquitous in Japan, coursing through popular manga and anime." 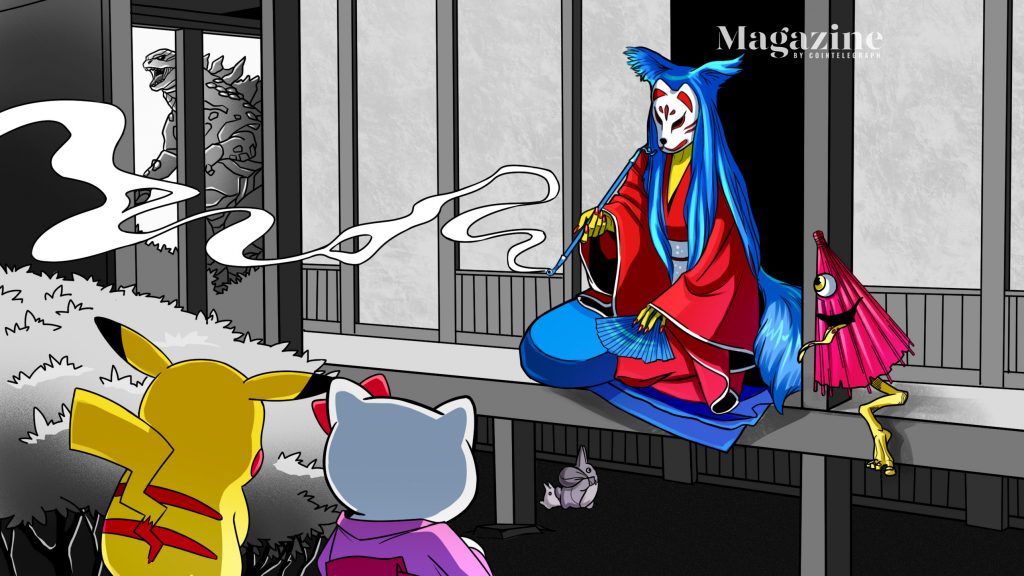 Anime is for kids? Think again.

As you grew older, perhaps you felt the need to “put away childish things”, as the verse from Corinthians admonishes us to do. You graduated from picture books to literature, from nursery rhymes to Nirvana, from the simple to the complex.

It’s the adult thing to do.

Yet anime, the cartoon-ish art form sometimes known as Japanimation, is not childish in either its origins or its message. In fact, anime is art with a message: it helps explain to children the right thing to do in life — and some might say, it provides a moral compass to adults.

It is the widespread appeal of both the anime style and its various messages that helps us understand why Japanese characters have an inbuilt advantage in the world of non-fungible tokens (NFTs), both in blockchain gaming and in the expanding arena of digital collectibles. The answer lies in one of the pillars of Japanese culture, Animism, as we will see. And while anime is but one example of this phenomenon, it is perhaps the one that best illustrates it.

There are many forms of anime, and in the version that is aimed at children the predominant themes are positive. Justice prevails. Friendship thrives. Love wins. The main characters are on the side of good, and the defeat of virtue is unthinkable.

This type of anime concerns itself with the promotion of “decent” human behavior. It doesn’t reflect the severe reality of, say, inequality. It is clean and simple. It encourages children to dream big, and to go claim those dreams.

And in this form, it is a form of cultural reassurance, a guidebook to the basic morality principles that the majority of participants in your society agree on. It seems playful, but its message resonates far beyond play.

This is the form of anime that is familiar to many in the West.

So, growing up in Japan doesn’t mean that you outgrow anime; more that you graduate from one style to another as you become more comfortable with adult thematic elements. Life is not easy, and adult anime makes that very clear.

So what’s the difference between the anime that Japan exports to a young global audience, and the more complicated domestic product?

Put simply, while many Westerners see cartoon-style animation predominantly as a form of children’s entertainment, the Japanese imbue anime characters with greater complexity, seeing past the animated presentation and considering the characters to have real-world relevance.

Simona Stanzani, a Japanese-Italian-English manga/anime translator/writer, said in an interview last year: ”What is attractive about Japanese Manga and Anime is its depth. Characters are very human-like, and human psychology and human relations are drawn conscientiously. It is as if watching dramas and movies. You can learn what is important in life.”

According to Globe, a fan from Serbia explained the uniqueness of Japanese anime as follows:

“When you are a child you believe you are the one who plays the leading part but as you grow up you face a different reality. Anything can happen in life. If a character spends a harsh life and is very realistic you can sympathize with her deeply.”

American game producer Maximilian Dood concluded that playing a Japanese video game, in his case Final Fantasy 7, was the first time he felt “attached to characters”.

Japanese cultural exports have strongly out-performed what we might expect of a relatively small country. As of November 2019, nine Japanese media franchises ranked in the top 25 of the world’s most successful of all time. Nintendo’s Pokémon has accumulated the most revenue with $92 billion. The Hello Kitty franchise comes in second with more than $80 billion — beating out both Mickey Mouse and Star Wars.

Pokémon has earned three times the revenue created by Harry Potter, or the Marvel cinematic universe.

And Japanese character popularity shows no sign of slowing: Netflix has secured exclusive rights to new episodes of Pokémon, while Hello Kitty is moving toward her Hollywood debut.

Japanese characters have evolved from the concept of Animism, which is rooted in the belief that humans do not have an exclusive franchise on the soul. Animals, plants, and inorganic substances have spirits (霊）and Animism treats all things as having agency. For Animists, anime characters have souls.

The Stanford Encyclopedia of Philosophy points out:

Notions of Japan as an animistic spirit-infused realm in which humans can commune with animals and other objects and forces of nature are ubiquitous in Japan, coursing through popular manga and anime.

Although few Japanese overtly support the theological concept of Animism today, it has been a major part of Japanese history and has influenced the Japanese way of thinking significantly. According to Takeshi Umehara, one of Japan’s leading contemporary philosophers, although Animism is considered by many to be a primitive religion its principles are still the basis of Japanese Shinto and Buddhism today.

Umehara claims that the denial of Animism means the acceptance of the concept that humans should, and do, control nature. The concept of Animism therefore directly contrasts with Christian monotheism, in which only human beings are considered to have spirits. In other words Animists see non-humans as active entities with agency, while for the Judaeo-Christian religions and the nations that follow their principles, non-humans are primarily passive objects that must be governed by humans.

So what does any of this have to do with NFTs and blockchain technology?

NFTs are tokens that have unique information or attributes associated with them, and they are therefore not replaceable by other tokens.

OpenSea, a leading NFT auction platform, explains that the reasons why NFTs are appealing to gamers include both provenance and utility.

“Utility is the obvious one: I’m willing to buy an NFT ticket because it lets me into a conference, I’m more willing to buy a piece of art if I can show it off in a virtual world, and I’m willing to buy an item if it gives me special abilities in a game. The concept of provenance encapsulates the story behind an NFT. Where did it come from? Who’s owned it in the past? As the space matures, the stories of interesting NFTs grow more complex and start to meaningfully impact a token’s value.”

The first major spike in usage for NFTs was during the CryptoKitties boom of late 2017, when the game became popular enough to slow down the entire Ethereum network and speculation on famous cats became rife. Scarcity, another feature of NFTs, was the focal point at that time. But scarcity alone doesn’t drive demand for NFTs.

Animism is about seeing an authentic relationship between humans and non-human entities — in this case, game characters. So when OpenSea explains that users have the opportunity to understand the provenance of game characters, this can mean two things.

First, it means users can know that the NFT is not fake. That’s the most basic use of a token in this instance.

But a second interpretation suggests that provenance allows players to also see their game character as having agency. As being… a friend.

They can have an attachment to that character because blockchain presents the opportunity to build a genuine relationship based on a shared history. Villages, cities, nation states and countries have all been built on the same principle. Our shared history defines us.

Consider Dungeons & Dragons, and the deep connection players created between themselves and their alter egos in the game. There are instances of characters who have persisted for decades in home games.

This level of attachment can be gained only when users see their relationship with a game character as more than transactional or transient. In other words, when the character itself becomes imbued with a spirit, a soul.

When a shared history becomes available via demonstrable provenance (blockchain), and it intersects with a narrative that promotes the concept of imbuing “non-real” characters with personality and agency (Animism) it’s not a leap to infer that technology and philosophy are converging in a powerful way.

Japan has sold character-driven narratives to the world for decades. Godzilla, Pikachu, Mario, Transformers, Hello Kitty, Doraemon… the list goes on. And the fan connection to these characters is illustrated by their global financial success.

Perhaps it seems somewhat strange for Westerners to consider that non-human entities have souls. But on the flipside, we open our wallets repeatedly to prove that we love cool characters with personality. And thanks to a history of Animism, Japan is a world leader in creating these unique and engaging characters.

Both in gaming and in collectibles, a sense of connection with character is one of the key assets in creating success. And as a country with decades of experience creating character narratives, it’s unsurprising that Japan should therefore be at the forefront in building blockchain brands that bring the technology both closer to our existing experiences, and also beyond them.

It’s equally unsurprising that the first (and to date, most) successful implementation of NFTs at scale was a game that featured cats, a species that both confounds and delights humans in almost equal measure, and which we anthropomorphize to a greater degree than perhaps any other.

As our lives change and we adopt remote working… as we sit at home through pandemics… as virtual reality edges ever closed to mass adoption… our connection with the physical world may change too.

As Sian Sullivan suggests in Nature on the Move III: (Re)countenancing an Animate Nature, perhaps we will eventually find ourselves enmeshed in a network of ever-changing relationships with non-human entities.

Japanese ones, if history is any guide. 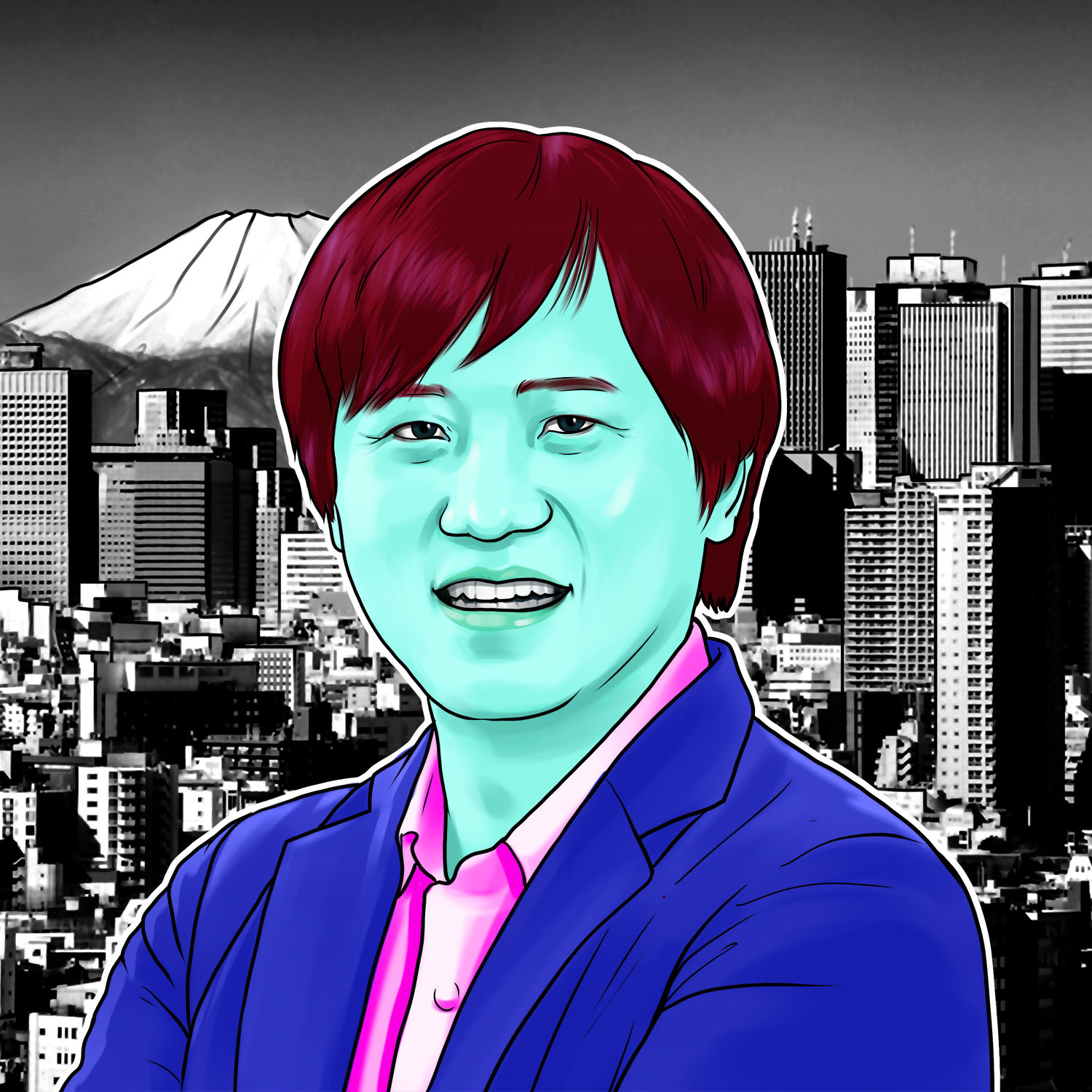 Hisashi Oki has covered both Wall Street and the 2016 U.S. presidential election for TV Tokyo as New York-based correspondent. He studied political philosophy while in the UK, as well as philosophy and economics in the Netherlands. Hisashi is also the Managing Editor of Cointelegraph Japan.
Most popular
Features