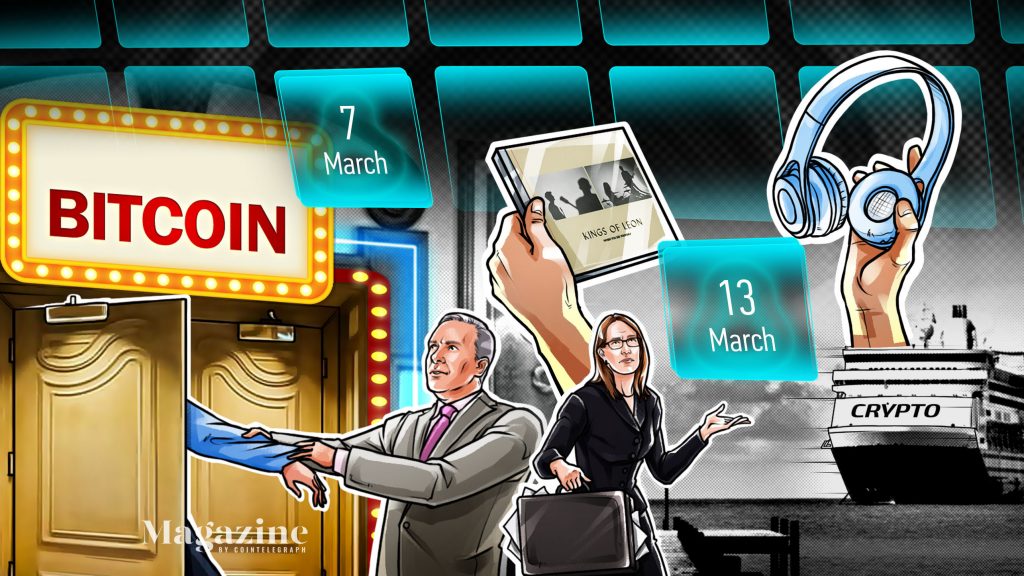 There’s plenty to discuss in the crypto markets, but this week, nonfungible tokens have stolen the limelight… for multiple reasons.

Digital artist Mike Winkelmann, also known as Beeple, has made history after his latest piece — “Everydays: The First 5000 Days” — sold for a whopping $69.3 million following an auction at Christie’s.

Only two other living artists, Jeff Koons and David Hockney, have created more expensive works… and as you might expect, this is the priciest NFT ever sold.

It’s a pretty special one at that. “Everydays” consists of 5,000 unique images, produced every day for 13-and-a-half years. The collage shows Beeple’s evolution as an artist and his shift to becoming a political cartoonist.

Beeple isn’t the only one laughing all the way to the crypto exchange. A group of crypto investors known as “Burnt Banksy” has made a tidy profit after a daring stunt involving one of the graffiti artist’s creations.

They bought a real-life Banksy painting for $100,000 last month. “Morons” satirizes the art industry and depicts a bustling auction for a framed canvas, adorned with the words: “I can’t believe you morons buy this shit.”

Last week, they set the painting on fire during a Twitter livestream in Brooklyn… and turned it into an NFT instead. Now, it’s sold on the NFT marketplace OpenSea for 228 ETH… worth over $400,000 at the time of writing.

Other big sales this week included a former DC Comics artist who made $1.85 million in four days by selling Wonder Woman NFTs. But not everyone has a price. A collector turned down a staggering $1 million for an NBA Top Shot moment they originally bought for $100,000.

Kings of Leon have reportedly made a cool $2 million through sales of their tokenized album — with $600,000 going to a fund that’s designed to support live music crews affected by the coronavirus pandemic.

Alas, the event hasn’t been without teething problems. Many of the band’s fans are complete newcomers to crypto and NFTs — and it can be a steep learning curve. This prompted Kings of Leon to extend their sale to March 20.

The NFTs have been released in collaboration with YellowHeart, a blockchain-based ticketing platform that is handling the auction on NFT marketplace OpenSea.

Six golden tickets have been released — giving fans front row seats for life, their own driver to gigs, and the chance to enjoy meet-and-greets with the band. One of the golden tickets fetched a whopping 89 ETH.

In other music news, the Russian punk feminist group Pussy Riot has revealed it is releasing four NFTs for its latest single to support a shelter for victims of domestic violence.

What a difference a year makes. Twelve months ago, Bitcoiners were licking their wounds after a devastating flash crash that took it below $4,000. Fast forward to now, and BTC has now set a new all-time high above $59,000.

It took a couple of weeks to reach this milestone, with BTC falling below $45,000 along the way. But the bounceback indicates that bullish momentum remains unshaken. What remains to be seen is whether this spike is the product of weekend volatility, or the start of something bigger.

Of course, there are reasons to be cautious. ExoAlpha’s David Lifchitz said this week that, despite Bitcoin’s price being in a long-term uptrend, there are some reasons for a more bearish outlook for the short term.

Tax season in the U.S. could prompt investors to sell off their holdings. It’s also March, traditionally a bearish month for the crypto sector.

Solution to scale Ethereum ‘100X’ is imminent and will get us through until Eth2, Vitalik says

With DeFi protocols flocking to rival blockchains — with Binance Smart Chain a big beneficiary of this exodus — Ethereum needs to take swift action to boost capacity and clamp down on sky-high transaction fees.

Eth2 remains some time away yet, but Vitalik Buterin has revealed that a temporary fix may be just around the corner: rollups.

Speaking on The Tim Ferriss Show podcast, he said Optimism’s layer-two solution could help Ethereum scale by a factor of 100. And by the time any additional capacity is needed, sharding “will have already been ready for a long time by then,” Buterin added.

Rollups process and store transaction data on a designated sidechain before bundling batches of transactions together onto Ethereum’s mainnet. This helps mitigate the blockchain’s scaling woes, where fierce competition for bandwidth on the Ethereum mainnet has resulted in exorbitant fees.

Optimism’s solution is set to launch in about a month, and the rollups are expected to be embraced by industry leaders in DeFi, with rumors suggesting the feature will be heavily utilized by V3 of Uniswap.

Gold’s ability to hedge against inflation has been somewhat exaggerated. While it is a reasonable store of value over the very long-term — think centuries — it is less reliable across most investment horizons.

The fact that Oracle hasn’t bought ‘yet’ is very bullish and signalling how early it still is.

Tesla in Rear View, About $80,000 Bitcoin Eyes Amazon Market Cap — Once Bitcoin’s back-and-fill process around the $1 trillion market cap is complete, we see internet pioneer Amazon.com as a potential next threshold.

Let’s Make History together with the first ever NFT for REAL ESTATE!

You’d have over $10,000 if you bought #bitcoin with your stimulus check.

DOGE does certainly already have a use case as a niche currency with avid fans, and adoption can certainly grow from here. But for it to genuinely be considered ‘future money,’ the narrative of DOGE as a meme coin will have to erode.

Last year, @Ripple and I sued @YouTube for failing to enforce its own policies by allowing fake accounts (impersonating my/Ripple’s verified accounts) to conduct XRP giveaway scams. We’ve now come to a resolution to work together to prevent, detect and take down these scams.

Rollups are coming very soon. We’re fully confident that by the time that we need any more scaling of that, sharding will have already been ready for a long time by then.

Gold will always have a place in jewelry and coin collections, but most indicators point to an accelerating pace of Bitcoin replacing the metal as a store of value in investor portfolios.

It’s so cool to see women and girls in the cryptocurrency space. It’s important for us to have empowered financial futures.

If blockchain designs and infrastructure get done at the enterprise level and there aren’t enough women, there won’t be anything created by female thinking patterns. This is the biggest issue we face today.

Even if you dislike Bitcoin, you should still buy it just in case it pans out.

The Shark Tank star is predicting that DOGE’s price will eventually hit $1… meaning Elon Musk isn’t the only megarich entrepreneur who’s in love with the joke coin.

Last weekend, he said customers had used more than 20,000 DOGE in transactions with the Dallas Mavericks, making it “the largest Dogecoin merchant in the world.”

The Mavericks were one of the first NBA franchises to recognize crypto as a form of payment for tickets and merchandise, having started accepting Bitcoin through wallet company BitPay two years ago.

Returning to NFTs now, and some are expressing fears that the market is overheated — and engaging in daring stunts to prove their point.

A crypto artist known as “Neitherconfirm” listed 26 NFTs for sale on OpenSea, featuring people and animal faces in a stained glass style. But things took an unexpected turn on Tuesday when they changed the images associated with each token into photos of literal carpets.

Neitherconfirm said no one was hurt by the move, explaining: “All discussions about the value of NFTs are meaningless as long as the token is not inseparable from the artwork itself. What is the meaning of creating an unforgeable token on a highly secured network if somebody can alter, relink or destroy your possession? As long as the value of your artwork is reliable on a central service you do not own anything.”

Peter Schiff’s son moves 100% of his portfolio into Bitcoin

We’ve known for a long time that Peter Schiff is a crypto skeptic and a gold bug. But this week, his son made a powerful statement that shows he couldn’t agree less with his father.

Spencer Schiff seems to have decided to move his portfolio investments into Bitcoin, with his dad expressing concern after he went all in. Peter wrote: “If my own son is this brainwashed imagine how vulnerable most kids are. He’s HODLing to infinity or bust.”

Snarky comments came in thick and fast, with Morgan Creek Digital co-founder Anthony Pompliano replying: “At least someone in your family is growing their wealth this year.”

Schiff went on to suggest that he needs to disinherit his son: “Otherwise he will squander my hard earned wealth on more Bitcoin.”

His criticisms of BTC have often proven to be well off the mark. Indeed, in 2019, he confidently declared that the world’s biggest cryptocurrency would never hit $50,000.

As the SEC lawsuit over the sale of XRP tokens rumbles on, Ripple is dialing down its legal action elsewhere. This week, the company announced that it has ended its lawsuit against YouTube for the video-sharing site’s alleged complicity in a spate of XRP giveaway scams.

Ripple CEO Brad Garlinghouse had taken YouTube to task for “failing to enforce its own policies by allowing fake accounts to conduct XRP giveaway scams” — fraudulent profiles that often impersonated his official page or other verified Ripple channels. Both sides have now reached a resolution that will see them work together to “prevent, detect and take down these scams.”

On Twitter, he added: “Social platforms are starting to acknowledge their role in allowing crypto scams to persist and recognize the need to be part of the solution.”In other developments, Ripple and Moneygram have officially terminated their partnership, but both companies expressed hope that they’ll get to work together again in the future.

Decentralized exchanges explore alternatives as Ethereum continues to be overloaded. Is this the beginning of the end for the blockchain?

The market may witness flash crashes in the near term, and another March 12 drop is not completely off the map.

True or false? A single NFT can power a European household for 1.5 months

NFTs are coming under scrutiny as more attention is drawn to the carbon footprint of PoW blockchains. This is how to make — and lose — a fortune with NFTs 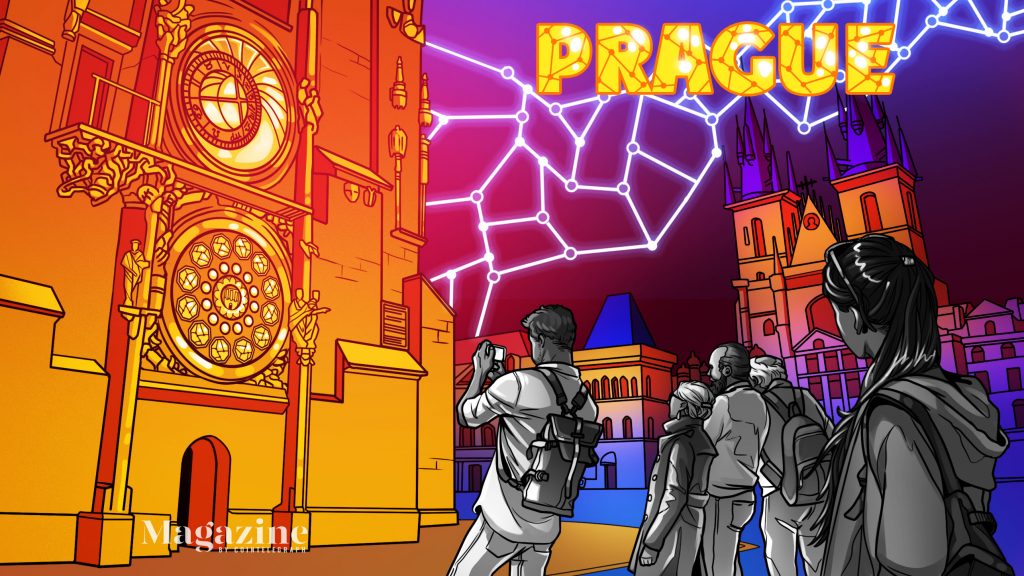