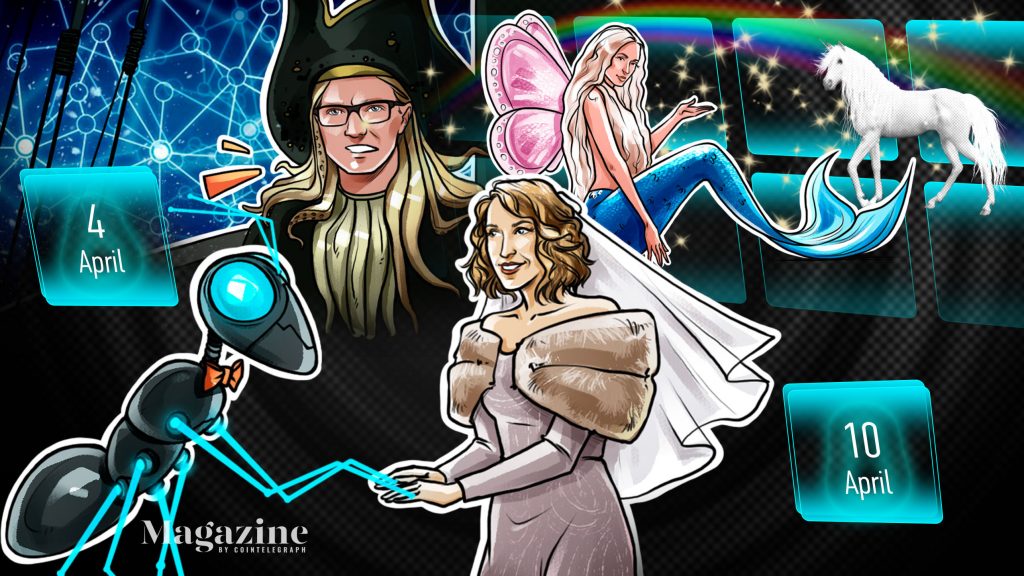 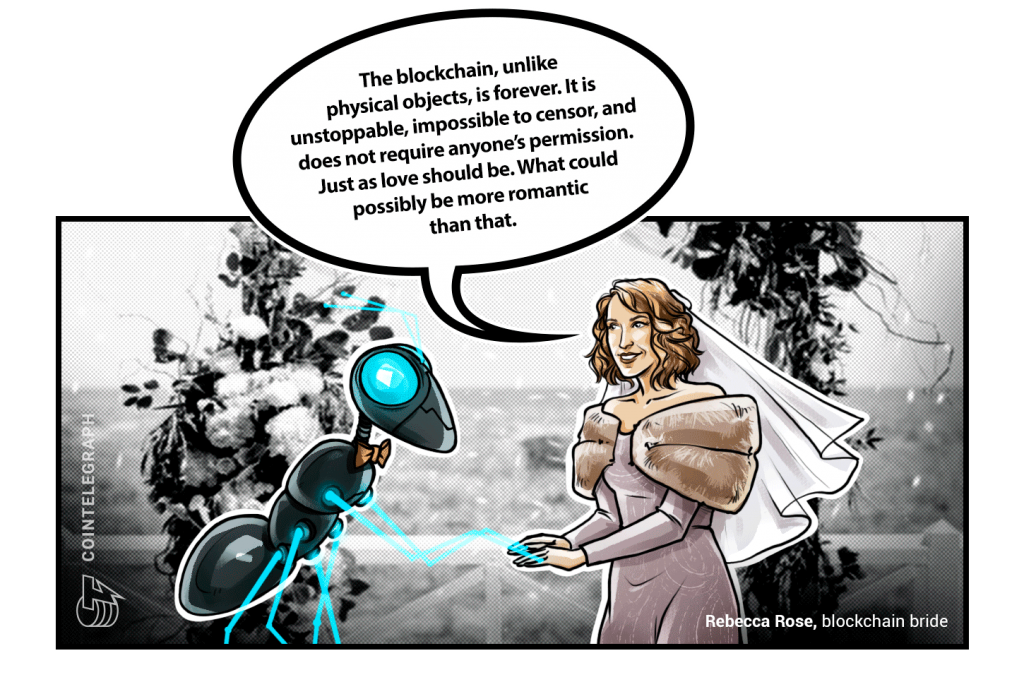 A bout of long-overdue volatility has hit the crypto markets, propelling Bitcoin to highs of $61,276.67 on Saturday.

A sudden push allowed BTC/USD to exit the $50,000 price range in the early hours of the morning. This move had been weeks in the making, with the digital asset repeatedly trying (and failing) to break $60,000 for most of March.

Analyst Lex Moskovski said Bitcoin is now grinding up to a new all-time high, writing: “Being a bear is expensive.”

But it’s unclear how much staying power this rally has, and as we’ve seen over recent months, erratic market movements over weekends don’t always endure.

The favorable market conditions led to new all-time highs for Ether and Binance Coin on Saturday… and another altcoin has also been making a comeback, too.

XRP surpasses $1 for the first time since 2018: What’s behind the new rally?

XRP has had a remarkable week, and over the past seven days, it’s almost doubled in price. On Tuesday, the altcoin smashed through the $1 zone for the first time since March 2018, with its price going from strength to strength in the days that followed.

It is currently trading above the next resistance level at about $1.20, prompting some to set their sights on a macro sell-wall of $2 that dates all the way back to December 2017.

XRP has now regained the coveted position of the fourth-largest cryptocurrency by market cap. The uptick in trading volume may have been linked to Ripple unveiling a new acquisition designed to enhance its cross-border payment capabilities.

There was also some upbeat legal news for Ripple this week. Ripple Labs has been granted access to the SEC’s documents “expressing the agency’s interpretations or views” on the subject of crypto assets.

Counsel representing Ripple’s CEO, Brad Garlinghouse, believes it may be “game over” for the SEC’s suit should they find any evidence that the regulator has deemed XRP akin to Bitcoin or Ether.

Speaking to Cointelegraph, Ripple Labs chief technology officer David Schwartz urged U.S. regulators to “look at the rest of the world,” warning America risks falling behind when it comes to crypto and blockchain regulation.

It’s been a week of upbeat statistics for the crypto sector. We saw the total market cap hit $2 trillion, meaning that the industry is now worth as much as Apple. There was a big milestone as 100 cryptocurrencies all secured their own $1-billion market cap for the first time. It was also revealed that the crypto industry got more funding in Q1 than all of last year.

Next week is also shaping to be a significant one as Coinbase gears up to make its stock market debut. And ahead of Wednesday’s direct listing, we got an insight into the company’s finances — revealing that revenues hit $1.8 billion from January to March.

The exchange’s numbers seem very healthy, indeed, undoubtedly because of the bull run that emerged during the first quarter. Net income has been estimated at between $730 million and $800 million for the period — with monthly active users now exceeding 6 million.

But not everyone is cracking open the champagne. Some analysts have warned that Coinbase’s $100-billion valuation is far too high.

David Trainer, CEO of the investment research firm New Constructs, wrote in a note to clients: “It’s hard to make a straight-faced argument that the firm can justify the lofty expectations baked into its valuation given increasing competition in a mature cryptocurrency trading market and the lack of sustainability in its current market share and margins.”

Paris Hilton has written an impassioned article about NFTs, declaring that she sees them as “the future of the creator economy.”

The entrepreneur and former reality star appears to be aiming to position herself as an authority on the NFT space, at least for a mainstream audience, as she readies to release a new drop soon.

Celebrating their role when it comes to digital art and fashion — not to mention bringing the world of trading cards into the 21st century — she wrote:

“Some of these applications might even change the way we live. What if we could use NFTs as collateral for physical items? Or as a way to trade for them?”

Hilton sold her first NFT in August 2020 before the mania arrived in 2021 — an NFT depicting a painting of her cat, which sold for $17,000. She donated all the proceeds to charity.

Couple gets married on Ethereum blockchain for $587 in transaction fees

Coinbase employees Rebecca Rose and Peter Kacherginsky have gotten married using the Ethereum blockchain — adding a whole new meaning to the vows “for richer or poorer.”

The ceremony itself consisted of two transactions: the transfer of the NFT “rings” from the contract to Rose and Kacherginsky. In total, the ceremony took four minutes to be validated by the Ethereum network and incurred $50 in miner fees.

By contrast, the average physical wedding in the United States costs roughly $25,000.

The NFTs depict an animation of two circles merging to become one and were illustrated by artist Carl Johan Hasselrot.

Rose wrote on Twitter: “The blockchain, unlike physical objects, is forever. It is unstoppable, impossible to censor, and does not require anyone’s permission. Just as love should be. What could possibly be more romantic than that?”

Announcement of the week

Markets Pro delivers up to 1,497% ROI as quant-style crypto analysis arrives for every investor

New figures this week showed that 41 of the 42 trading strategies tested by Markets Pro are currently beating Bitcoin’s investment returns, and 36 of them are winning against an evenly weighted basket of the top 100 altcoins.

Two key features are offered to subscribers. The first is the VORTECS™ Score, which is derived from an algorithm that examines multiple different variables (including sentiment, tweet volume, price volatility and trading volume) and compares those with historically similar marketscapes.

And the second is NewsQuakes™: alerts on events that have historically had a significant impact on an asset’s price over the following 24 hours.

Cointelegraph Markets Pro is available exclusively to subscribers on a monthly basis at $99 per month, or annually with two free months included. 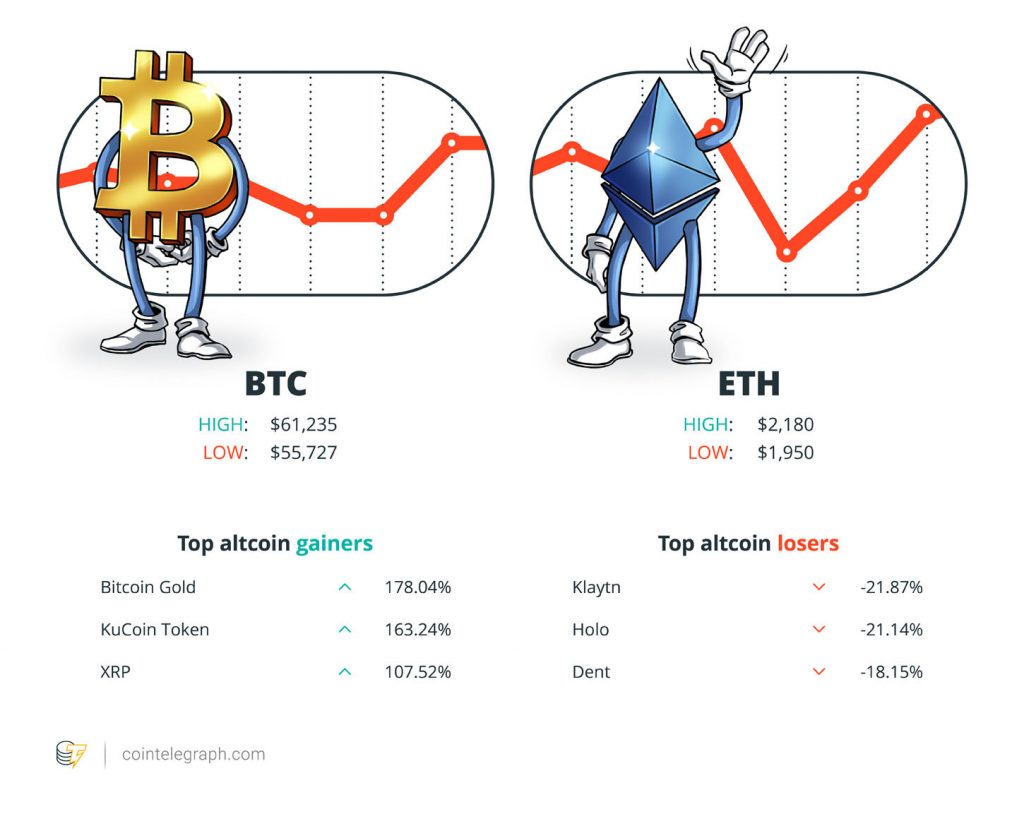 Fascinating to see that since inception ETH has outperformed BTC by 250%. It only fell below its initial price in BTC for the first 5 months of its existence in 2015.

The pandemic, quite frankly, was a catalyst for institutional adoption, and specifically Bitcoin and the narrative, or use-case, around digital gold.

What we need is for the United States to be the leader here. We need to embrace this, so we need to make sure that we use this technology to continue to be a leader on the global stage.

Even though I’m a pro-crypto, pro-Bitcoin maximalist person, I do wonder whether if at this point, Bitcoin should also be thought of in part as a Chinese financial weapon against the U.S.

Not for nothing, $XRP technically has taken all necessary strides to be bullish. After the exchange delistings and write-off by most of CT, this essentially left the market short from both a positional and sidelined standpoint. This can move much higher.

If you look at gold as a $10 trillion market cap, Bitcoin is about 10% of that, and if we believe Bitcoin is a 100 times better version than that, then it’s fairly safe to say that there’s a stark chance that Bitcoin captures a lot of gold and market share, and more.

JPMorgan Chase expects Bitcoin to reach $130,000, while Ark Invest anticipates the market valuation of BTC to surpass that of gold.

The optimistic macro prediction from both funds revolves around the scarcity of Bitcoin, which has buoyed its popularity as a safe-haven asset. 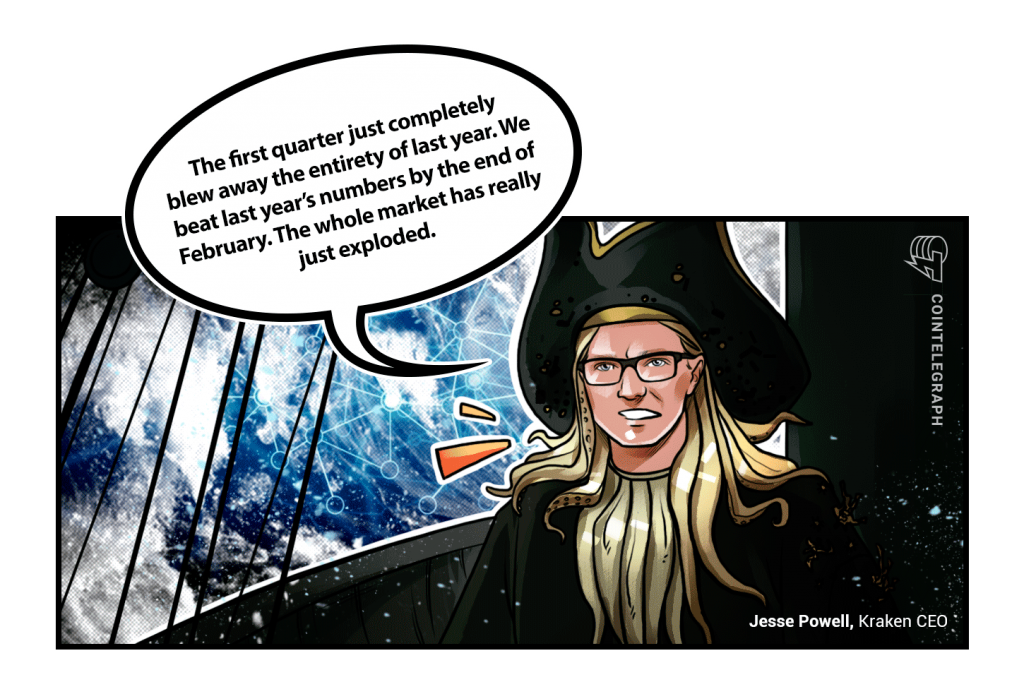 There have long been doomsday predictions that we’ll see Bitcoin prices plummet to zero, but one person has vowed that this won’t happen, not on their watch.

Reddit user u/Substantial-Ad-5012 wrote: “Bitcoin will never go to zero in my lifetime. Because I am willing and able to buy all the Bitcoin ever mined at one cent each.”

In the unlikely event that Bitcoin does in fact drop to $0.01, it would cost a mere $187,000 to pick up every coin in circulation — not accounting for the fact that up to 20% of all Bitcoin are inaccessible.

They’re not alone. Binance CEO Changpeng Zhao told his followers last March that they shouldn’t be worried about BTC hitting zero. “So long as I have a penny left, it won’t happen,” he wrote.

However, a spokesperson from the company has told Cointelegraph that no customer data has been jeopardized.

Explaining that Paxful hasn’t fallen victim to a data breach, the spokesperson added: “The employee data that the person claims to have was obtained illegally from a third party supplier that Paxful previously used; Paxful terminated its contract with this supplier in September 2020.”

The person attempting to sell the information claimed to have phone numbers, names and addresses, as well as other private information belonging to users — and the “dump” purportedly boasted more than 4.8 million entries.

Ledger and Shopify have been hit by a class-action lawsuit over a major data breach that saw the personal data of 270,000 hard wallet customers stolen between April and June 2020.

Phishing scam victims John Chu and Edward Baton filed the lawsuit in California against the crypto wallet provider and its e-commerce partner Shopify on Tuesday.

The plaintiffs alleged that the firms “negligently allowed, recklessly ignored, and then intentionally sought to cover up” the data breach.

The data was stolen when rogue employees of Shopify accessed the company’s e-commerce and marketing database for Ledger, with the hackers then selling the data on the dark web.

“Had Ledger acted responsibly during this period, much of that loss could have been avoided,” they claim.

Chu lost $267,000 worth of Bitcoin and Ether, and Baton lost $75,000 worth of Stellar in phishing scams that impersonated correspondence from the firms. 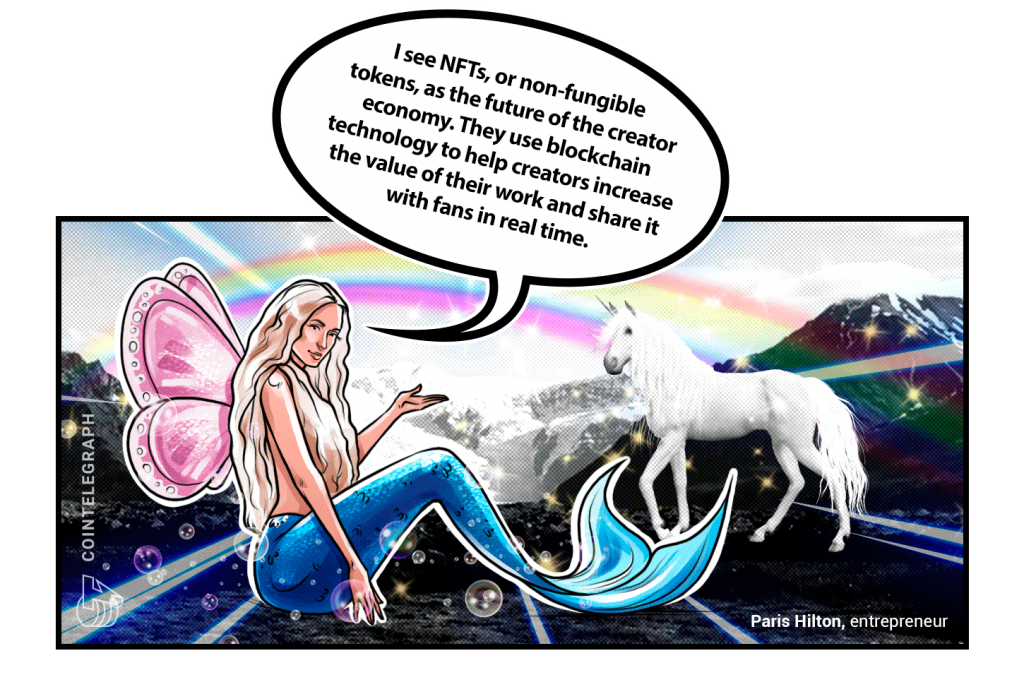 Traditional finance is built not on collateral but on reputation, and DeFi will grow by following suit, Rafael Cosman argues.

You don’t own me: XRP price surge defies SEC’s clampdown on crypto

Since the start of April, the surge in price of XRP has been backed by high tweet volumes, which approached relative highs.

Crypto at risk after Facebook leak: Here’s how hackers can exploit data 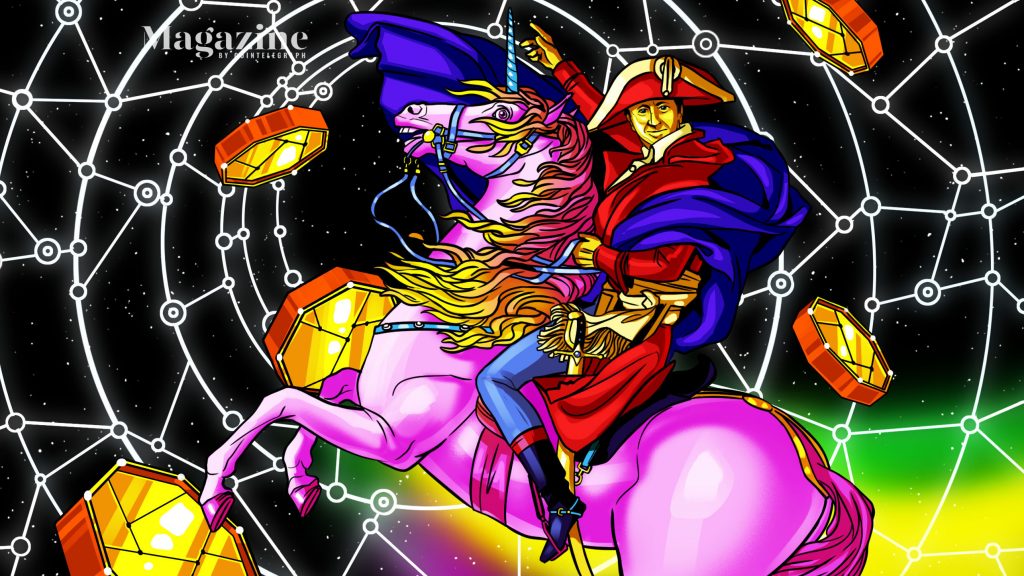 The adventures of the inventive Alex Mashinsky 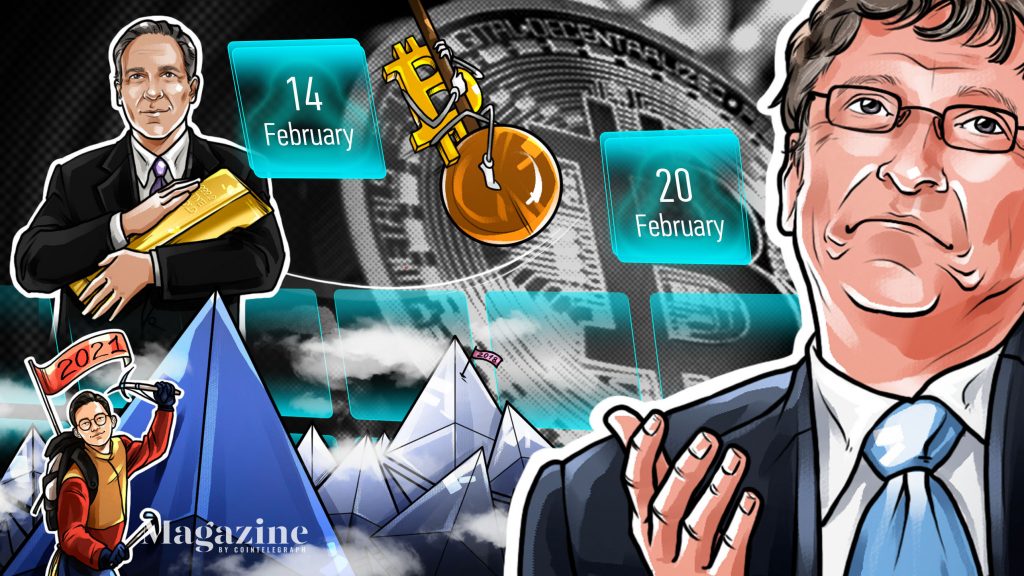