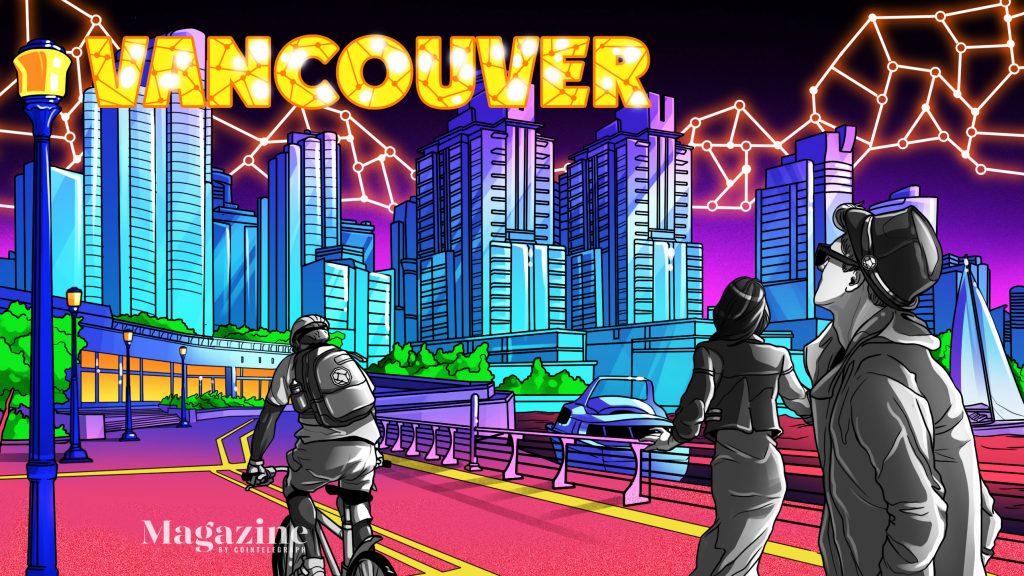 The city of Doge is the home of Crypto Kitties, the first Bitcoin ATM, and a mass blockchain wedding.

Vancouver hosts a massive mural in honor of Polkadot, and entire city blocks here are heated with Bitcoin mining. The site of the first Bitcoin ATM, the city has also hosted a blockchain wedding overseen by a “Doge Preacher.” Home to Dapper Labs and other blockchain projects, there is also a share of mystery, like the crypto exchange CEO who allegedly died in India.

Situated on Canada’s west coast in the province of British Columbia, Vancouver makes up the country’s third-largest metropolitan area. Consistently rated among the world’s most livable cities, Vancouver is notable for its ethnic and linguistic diversity brought on by waves of immigration, and less than half the population speaks either of Canada’s official languages, English and French, as their first language. Nestled between mountains and the ocean and aiming to become the world’s greenest city under an urban planning philosophy called Vancouverism, it rates among the most expensive cities in the world in terms of housing.

Originally settled by indigenous peoples over 10,000 years ago, the modern city grew around a tavern on the edge of a sawmill built in 1867. Its prominence grew with the introduction of the Canadian Pacific Railway. Very close to nature and various climates, it is a major tourist hub offering whale watching, skiing, old-growth forests and other outdoor activities. It is today a major port city and travel hub, serving as a gateway to the far east both via Vancouver International Airport and in terms of culture, with people of Chinese ethnicity alone making up 27% of the population. The city hosted the Winter Olympics in 2010 and is sometimes called “Hollywood North” due to its notable film industry.

Compared to the more business-like Toronto, which is a 4.5-hour flight away, Vancouver takes after the United States west coast with a more casual atmosphere — perhaps helped by the far milder weather, which makes Eastern Canada with its freezing rain seem a world away. Despite its relatively small population of 38 million, Canada is an outsized contributor to the blockchain industry, perhaps most notably as the birthplace of Ethereum.

“In an inconspicuous storage unit below street level in a major west coast city, there exists a cult-like underground hacker’s collective that not only operates entirely via a blockchain application but features a prominent and intricate ‘altar of plenty’ set before a mural of DOGE. This altar is piled high with collective offerings of thousands of dollars of paper cash and marijuana, both of which are ceremonially burnt according to a cryptographic algorithm.”

That’s a passage from my book Blockland, which records the strange story of the crypto industry. The city in question, of course, was Vancouver, where I lived for a short time at the “Decentralized Dance Party HQ,” whose other residents organized Vancouver DogeCon, the first-ever Dogecoin conference in 2018. Later, the DDP spun off the Million Doge Disco, a Dogecoin project headed by Canadian Prime Minister Justin Trudeau’s brother Kyle Kemper, who comes across as a hippie evangelist spreading “Doge-consciousness” around the world.

The weirdness doesn’t stop there. Vancouver’s CoinFest 2019 blockchain conference featured the first mass blockchain wedding, which saw three couples get married on the blockchain — the ceremony also being recounted in the book:

“A flower girl delivers a specially prepared USB stick, which the bride inserts as Doge Preacher directs her to enter the password. Lines of code appear, buttons are clicked, and the ENTER is pressed to sign the transaction… ‘Blockchain official!’ declares Doge Preacher, who is wearing a Doge shirt under his tieless suit jacket in such a way that an eye of Doge peers from the center of an upside-down pyramid on his chest.”

In 2021, the underside of Cambie Bridge was transformed into a 1,765-square-meter blockchain-based augmented-reality art installation called Voxel Bridge. It is a visual representation of the Kusama network, a blockchain built as a “canary” chain to Polkadot. Unlike most major cities, there is even a Meetup group dedicated to Polkadot and Kusama.

“This installation transcends the enjoyment of art into a unifying and experimenting effort that enables blockchain technology, AR and public art to examine new ways of interaction,” noted the artist Jessica Angel.

In North Vancouver, a separate city connected by a bridge, over 100 buildings are heated by a Bitcoin mining operation. MintGreen is a local cleantech Bitcoin miner that signed a 12-year contract in 2021 to use “Digital Boilers” to convert the energy generated by miners into heating for residential and commercial buildings in the area.

Samson Mow, an adviser to the project and part-time Vancouver resident, noted:

“MintGreen’s new innovation is a perfect example of how mining bitcoin can be the greenest use of energy on the planet.”

“It’s been regularly said that Vancouver is a world-class city with an ocean attached. It’s also a city of many crypto firsts, from the first Bitcoin ATM to the first blockchain art installation. It’s amazing to watch how the crypto scene has developed here, and we can’t wait to see the next wave of Vancouver-based crypto innovators,” Covalent’s PR spokesperson tells Magazine.

While this article is concerned with the city as it exists in our physical world, it is notable that even digital Vancouver real estate is hot property on Next Earth, a blockchain-based metaverse in which users can buy NFT real estate based on the world map. In February 2022, Vancouver-based TerraZero Technologies announced the first ever “metaverse mortgage,” which utilized its platform to finance a land plot in Decentraland. The local financial authority has also weighed in on real mortgages backed by digital currencies, saying that “there is nothing prohibiting buyers from using such unregulated digital currencies,” according to local media.

It is notable that in 2012, the cryptocurrency Ripple was also invented in the province by Ryan Fugger, though some distance away in the city of Kelowna.

Where can I spend my Crypto?

Vancouver’s claim to crypto fame is tied to its bearing witness to the first-ever Bitcoin ATM, which began operations in a local coffee shop in 2013. A year later in 2014, it was labeled as the “Bitcoin Capital of Canada” by straight.com, which noted over 60 venues, including a medical marijuana dispensary, accepted the cryptocurrency in the area. In the following year, Cointelegraph counted Vancouver among seven cities leading Bitcoin adoption in 2015, with merchants now counting well over 100.

The Bitcoin ATM business continues to this day, and a number of cafes and restaurants continue to accept crypto payments according to Coinmap, among them Rouge Bistro, Steamrollers Burritos and Waves Coffeehouse. Fitting the city’s active reputation, pet store Lead Mate and Zyza Yoga Clothing & Active Wear are stores that will gladly take tourists’ crypto. For those who end up falling in love and staying longer, Man About Town Entertainment will arrange weddings and other events for Bitcoin. A 2021 report by Statista.com indicates the presence of 101 crypto-accepting businesses in the city, putting it well ahead of the twice-larger city Toronto’s 72 and also claiming the Canadian title of most “crypto accepted here” signs per capita.

“Canada’s financial regulations have also evolved to be crypto-friendly. Bitcoin is recognized as a payment solution for digital assets,” a representative of Covalent tells Magazine.

Dapper Labs is the creator of NBA Top Shot and is famous for its creation of CryptoKitties, which is credited as the first NFT game. Blockchain startup Flow was also launched by the Dapper Labs team and is building the Flow blockchain into a solution to meet the speed and throughput needs of the nascent blockchain-based gaming industry. Data analytics and blockchain indexer Covalent, known as “the Google of blockchain,” was also launched here.

PoolTogether is a crypto-powered “savings lottery,” inspired by the United Kingdom’s Premium Bonds, which are government bonds whose principal remains the same, while the monthly interest payments are distributed by lottery. In the case of PoolTogether, users deposit cryptocurrency, which accrues an overall ~5% APR via external DeFi protocols for lottery-based distribution.

In 2021, Seychelles-based crypto exchange BitMEX, which does over $1 billion in daily volume, selected Vancouver as the location for its North American office. The firm’s CEO, Alexander Höptner, was quoted praising the city, saying that “Vancouver is very attractive to us because of its business environment, rapidly developing crypto ecosystem, and abundance of top-tier talent.”

Though it appears that none of the leadership team lives in the city, crypto conglomerate Blockstream, headed by Bitcoin forerunner digital currency Hashcash inventor Adam Back, is based here.

Vancouver plays host to a number of crypto exchanges, including Vancouver Bitcoin and Vancouver Cryptocurrency Exchange, both of which offer personal in-office treatment, with the latter even accepting gold and silver as payment. Netcoins, which has a mobile app in addition to an office, offers more trading pairs and lower trading fees.

Like almost any city with a notable blockchain heritage, Vancouver has seen its share of crypto-drama. Chief among these is the story of QuadrigaCX, an exchange whose founder, Gerald Cotton, reportedly died in India in 2018, seemingly taking the private keys to the firm’s $190 million worth of cryptocurrency with him. The company naturally went bankrupt, and many unanswered questions remain, including legal demands to exhume and DNA Cotton’s body by users who believe he may have faked his own death. In June 2020, the Ontario Securities Commission released a report concluding that QuadrigaCX was a fraud and a Ponzi scheme.

The founder of Einstein Exchange, another failed trading house, was, in 2021, ordered to pay $535,000 Canadian dollars to a former client for breach of contract regarding a purchase of 50 BTC in 2019, which suggests that the British Columbia court system takes the cryptocurrency industry seriously.

“Don’t get lured in by fancy websites, online advertisements or unexpected phone calls.”

Students at the University of British Columbia, which ranks 13th globally, started their own Bitcoin Club in 2014. Today, the university offers a blockchain education program called Blockchain@UBC. Part of this is the UBC Micro-certificate in Blockchain Innovation and Implementation, which consists of two online courses over eight weeks covering the essentials of blockchain and the planning and leading of projects.

There is also a blockchain summer school connected to the UBC Sauder School of Business and a “blockchain training pathway” option available for current master and doctorate students. The school also arranges an annual conference and Blockchain Technology Symposium. According to Victoria Lemieux, Blockchain@UBC research cluster co-lead:

“Our multidisciplinary and award-winning blockchain graduate pathway combines course-based training with industry-led research internships and extended learning courses for working professionals who want to move into the blockchain space.”

If you have any suggestions for additions to this guide, please contact eliasahonen@cointelegraph.com. 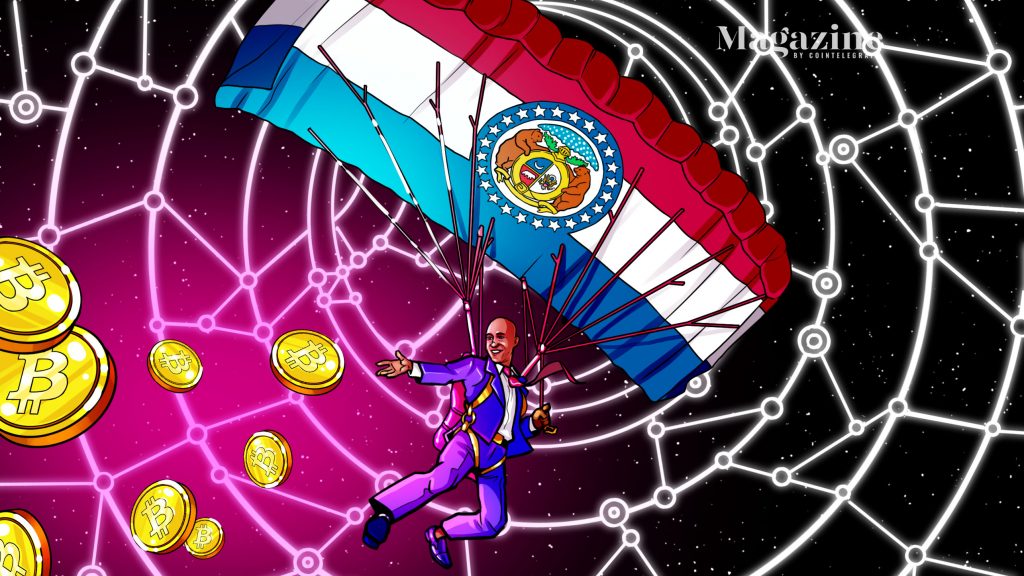 Cool green mayor giving a grand in Bitcoin to each resident 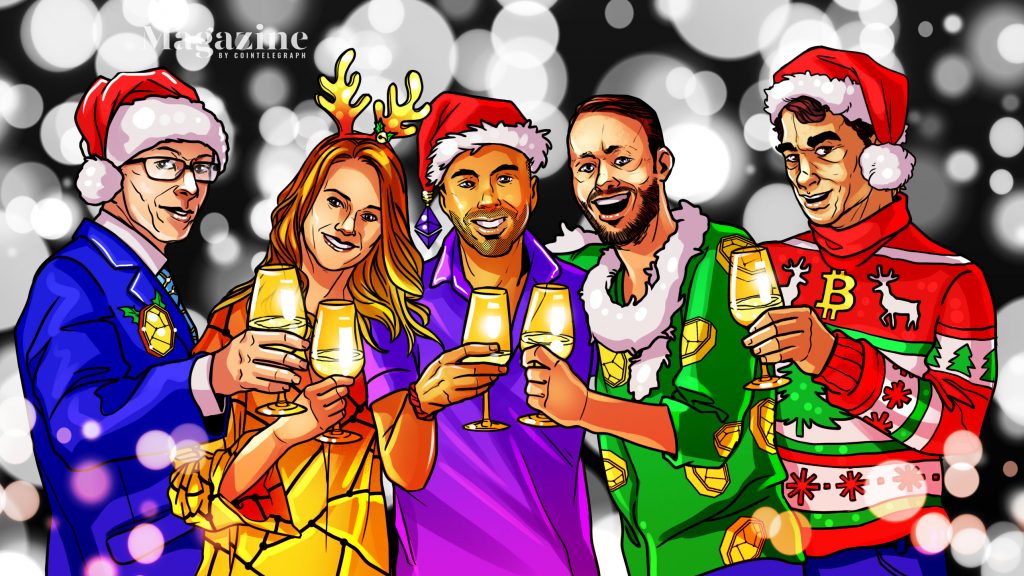