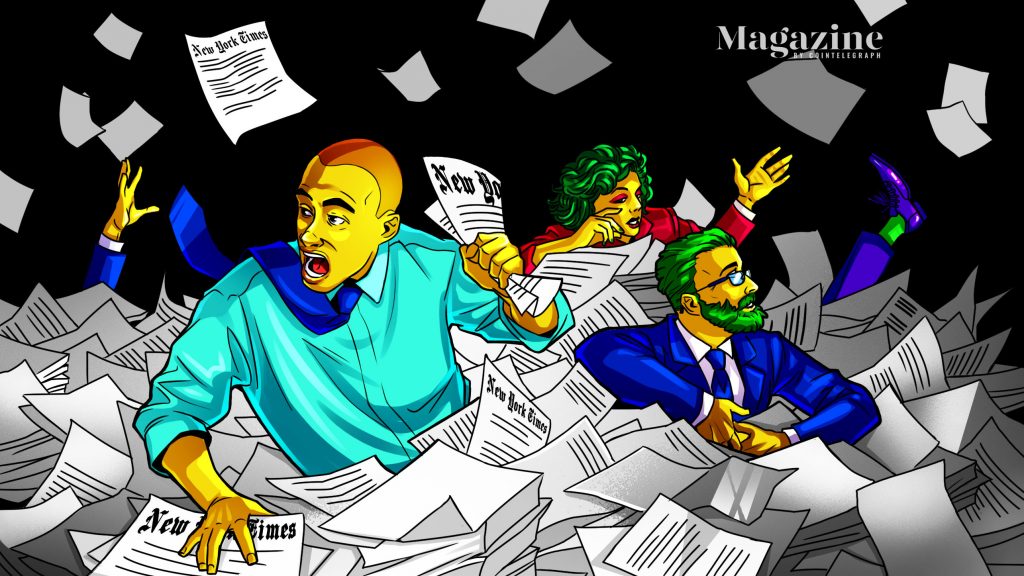 This morning Grayscale, the world’s largest provider of cryptocurrency investment vehicles, temporarily turned its attention away from hoovering up the supply of Bitcoin to focus on arguably the most intractable problem in all of crypto: getting your stubborn friends and family on board.

Last Friday Grayscale founder and CEO Barry Silbert teased a massive ad buy on Twitter with the intention to “brrring crypto to the masses” — and this morning he delivered, with spots on CNBC, MSNBC, FOX, and FOX Business, among others. The Grayscale blog, meanwhile, pitches the ad, titled The History of Money, as:

“A wakeup call that people everywhere should seize what we feel is a once in a generation opportunity that digital currencies may present.”

On paper that sounds easy enough, but the practicalities are grimmer — just about every crypto enthusiast is familiar with the scoffs, the furrowed brows, and the incredulous stares when discussing crypto with family members during the holidays. To be successful, this campaign would have to fundamentally recalibrate the average investor’s opinion, one that remains generally apprehensive, on an asset class barely more than a decade old.

Slowly at first, then all at once: the bankruptcy of denial

In some respects, the timing seems right. Powerful people are finally starting to Get It. The market makers, from their perches atop the economy, are now aping the same arguments that Bitcoin acolytes have pounded into the table for years: it’s a hedge against inflation says Paul Tudor Jones; it’s digital gold, echoes Tom Jessop. Consider the micro-history written into the forced smile on Jamie Dimon’s face — in just a few months his smug smirk when talking about Bitcoin evolved into mopey resignation; cryptocurrency, he finally admitted, had a real use and a real future.

But while the good folks down in lower Manhattan are coming around, the same cannot be said for Main Street investors, who have been fed a thin diet of skepticism on digital assets by financial gurus.

Yet early harbingers of inflation are flashing warning signs; corporatism prances naked and unashamed through the capitol; a President is openly discussing defunding two of America’s most heavily relied-upon social safety nets, Medicare and Social Security. Central bank balance sheets collectively arc parabolic. Unemployment remains in the double digits. Macroeconomic conditions daily concoct new ways to demonstrate the need for cryptocurrency… and yet barely a quarter of Americans are inclined to buy Bitcoin.

Thus, the space is left with a stubborn roadblock to mass adoption: those populations which could most benefit from Bitcoin as it develops into a true store-of-value — the middle-class savers and investors searching for a bulwark against inflation and uncertainty — are among the least likely to understand the cryptocurrency asset class, let alone know how or where to buy it.

If the general population is going to benefit from buying crypto, they need to know what it is. If the Grayscale ad is going to achieve Silbert’s stated goals, it will have to do more than advertise — it has to educate.

The exceptionalism of contrarianism

Though the task seems monumental, there is at least one successful historical precedent. Nearing the end of 1948, the United States grappled with similarly bleak conditions to those today: the postwar economy was caught in the grips of a recession, facing a stock and bond market starved of liquidity, and inflation and unemployment rates both nearing 10%.

And with the Great Recession very much in living memory, few were willing to take risks with their money.

Unfortunately, risk was exactly what the economy needed. Private investment from the middle class could have bolstered the nation’s outlook and protected the wealth of countless families, but there weren’t many transparent, mainstream ways for individual investors to access stock and bond markets. The SEC had formed just 15 years earlier, and the Roper Survey in 1939 — best known today for tracking anti-Semitism in the middle 20th century — showed that the majority of America believed Wall Street was where cattle were traded — the New York (live)Stock Exchange. Few Americans even knew the difference between a stock and a bond.

Enter Charlie Merrill. The legendary banker is credited for popularizing stock and bond investments at a time when they remained alien to most of the population. He started his career with contrarian bets, engineering the merger that created the Safeway line of chain stores when conventional wisdom held that grocers were below the attention of Wall Street firms; and later most notably when he called for investors to sell stocks in 1929, citing the Federal Reserve who warned that markets were growing “exuberant.”

(He also famously sold all of his partner’s, Eddie Lynch’s, stock while Lynch was away on vacation — Lynch remained understandably furious. Right up to Black Monday).

As World War II came to a close, Merrill eyed his greatest countertrade yet: recapitalizing a country starved of investment. He knew that Wall Street wouldn’t be able to do it alone, and from his experience with the chain stores he understood that middle-class America was a largely untapped source of economic might.

However, there remained the question of how to attract a whole population to a foreign asset class at a time when individual investment participation sat in the low single-digit percentile. Merrill himself said of the task:

“It was probably the biggest job of mass education that’s ever confronted any business at any time in the history of this country.”

The tip of the spear for this educational effort was Merrill Lynch’s 1948 ad in the New York Times, ‘What Everybody Ought To Know About This Stock and Bond Business.’ Composed by Louis Engel, the ad is a genuine oddity in the history of advertising.

The full-page, 6,500-word spot — the longest word count for a newspaper advertisement ever — laid out with textbook simplicity the basics of the markets, and only mentioned Merrill Lynch once: an invitation to request more information by phone or by mail in order to learn more.[TS-VCSC-Lightbox-Image content_image=”6061″ content_image_size=”large”]In addition to being strange, the ad was also a massive risk — a full-page ad in the Times cost $5,000 dollars, roughly 2% of Merrill Lynch’s entire ad budget in 1948.

Luckily for Merrill (and Engel), it was a success. The ad ran for months, and eventually in condensed versions well into the 1950s, collectively leading to over three million responses. In no small part due to Merrill Lynch’s efforts, the number of individual investors in the United States nearly doubled between 1953 and 1959, rising from 6.5 to 12.5 million. For his part, Engel was offered a book deal from Little, Brown, and Co., eventually producing the seminal “How To Buy Stocks,” which ran through eight editions and was most recently re-released in 1994.

Today, the similarities between mid-century Merrill Lynch and Grayscale are easy to list. Silbert bet big on cryptocurrencies before they were popular, founding Grayscale in 2013 at a time when other institutions were reluctant to take the plunge. Grayscale has also made a point to lead the charge on the education front: their 2019 #DropGold campaign sought to teach investors about Bitcoin’s superiority to gold as a hard asset — a campaign that still rankles noted goldbug and longtime Crypto Twitter nemesis Peter Schiff.

The latest Grayscale ad isn’t a novella-length primer like its Merrill Lynch predecessor, but still possesses a similar educational spirit. It’s also peppier by multiple orders of magnitude. That legendary guitar riff from The Ramones’ Blitzkrieg Bop will grab the attention of viewers inclined to tune out during commercials (though the choice not to opt for Grandmaster Flash’s The Message — a song with a comparably sharp hook that explicitly gripes about high inflation — is nigh unconscionable), and it gallops through the history of money with all the zip and wit of a Jared Vennett voiceover. It’s a good, fun spot.

Good, fun… and on cable news. The importance of the latter can’t be overstated. The history of money is one of the headier, more complex tacks one can take when explaining crypto’s importance, one which can abruptly veer into conspiracy-speak — listen, we used to use SEASHELLS, you understand…? — but ‘The History of Money’ makes the subject borderline palatable.

Arguments that were once the near-exclusive provenance of sweaty Twitter zealots with ‘Self-Taught Economist’ in their bios are now being made during the commercial break.

‘What Everybody Ought To Know’ laundered a revolutionary idea through a ubiquitous, trusted medium in The New York Times, and Grayscale has pulled off a similar feat here — the normalization effect could alone be massive.

In the end, though, the campaign needs to do more than normalize. Ultimately ‘The History of Money’ will be measured by a similar metric as Merrill Lynch’s: how many new investors did it bring to the table?

It’s an easy ice breaker for the space, because everyone has a story.

In these early days it’s still a world that has to be ‘gotten into’ — the educational process is more like falling down a well (or a rabbit hole) than a classroom experience.

Crypto-assets could very well change the fortunes and futures of countless families. So let’s hope that just as Merrill’s ‘What Everyone Ought To Know’ advertisement introduced boomers to stocks, a whole new generation of hodlers one day recalls they way they discovered crypto:

“Oh you know — that one Grayscale commercial.” 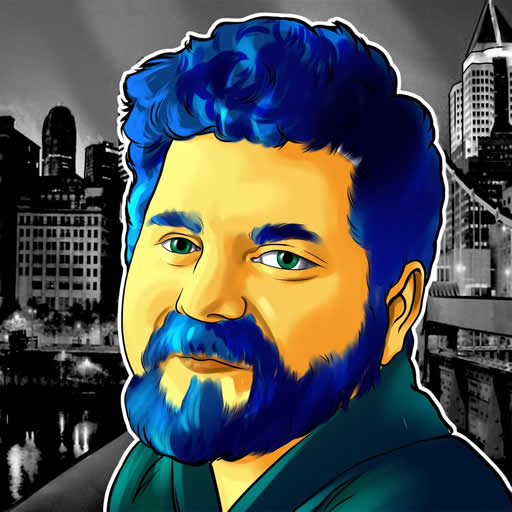 Andrew Thurman is struggling to keep up. He writes about DeFi, NFTs, and blockchain innovations for Cointelegraph, and spends the rest of his time grumpily Tweeting.
Follow the author @Blockanalia
Most popular
Features