Will the growth continue?

Ethereum’s upward trend has ended with a powerful drop. Disrupting the structure of its trend at the level of $19, Ethereum’s price was not able to hold there, for a continued upward movement. The $19 mark was responsible for the structure of the entire upward trend which started at $14. That’s why a turn to decline at that point was able to provoke such a fall. The probability of the upward movement continuing from that mark was 50/50, but after the turn has formed, the downward movement became more probable. Litecoin is still forming an upward trend. Several price rebounds from an important resistance of $4.6 indicate that the bulls are holding the advantage. That’s why the odds are on the side of an upward trend. DASHBTC is forming a deeper long-term downward correction. The reason for that downward movement is a cancellation of a medium-term flat and, naturally, the continuation of the upward Bitcoin trend. 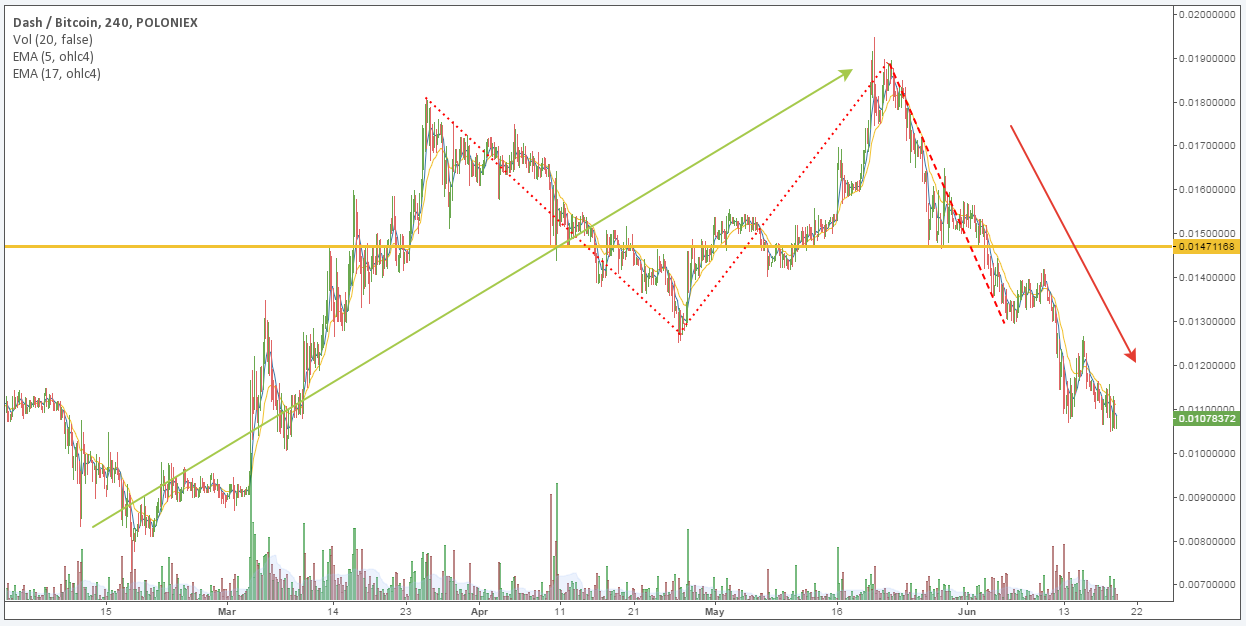 The dollar situation is really vague. World currencies have not been forming any kind of a clear trend since the beginning of the week. That means that the dollar is in a flat. The reason for that flat is that the movement has reached its minimal long-term correction targets. The movement which started at the beginning of this year by most world currencies is a rebound toward the dollar’s long-term upward trend.

Consequently, if that dollar trend continues, the prices of world currencies are going to drop, relative to the dollar. This will also have an effect on altcoins which are traded for the dollar.

In regards to technical targets, Ethereum’s price has to break through the key level at the intersection point of the accumulated volume and Fibonacci level 50. Until Ethereum’s price passes the $16 mark, the odds will be on the side of a downward trend. If the downward structure is not disrupted, the movement will have enough potential to reach $7. If the trend’s structure remains intact and there are no signs of a turn to growth on world currencies, the chances of a downward movement will be higher than 50%. Litecoin’s price has to keep its structure for the upward trend to continue. A new key level has formed around $5. The accumulated trading volume and Fibonacci level 38 intersect there. Litecoin’s price has confirmed the importance of that mark by its rebound. If the bulls keep their current advantage, there will be at least a false downward breakthrough and a new upward movement. If a fortification and a turn to decline form, the odds of the upward movement continuing will be less than 50%. In that case, Litecoin’s price will at least start forming a medium-term downward correction.

The continuation of the DASHBTC’s downward trend depends on the structure of that movement, as well as the fluctuations of Bitcoin itself. The key resistance, where DASH’s price is likely to change direction is the level around 0.0125. Several key instruments intersect at that mark. The stop and correction of Bitcoin’s price from 13 to 15 July have caused an upward rebound toward the downward DASHBTC trend. That’s why the new Bitcoin’s downward movement and the break through the level of 0.0125 on Dash can provoke at least a beginning of an upward correction towards the whole downward movement which started at 0.0195. In that case, the chances of an upward trend beginning will be higher than 50%.

The key altcoin levels where the chances are likely to shift:

In case of a fortification of Ethereum’s price at the level of $16 and a formation of a turn to growth, the odds will be on the side of an upward trend.

The odds will be on the side of a downward trend on Litecoin, if the price fortifies around $5 and follows with a turn.

The downward DASHBTC trend will be most likely to end if the price forms a turn at 0.0125.