Markets have taken a near-unanimous upturn, even as onlookers have been pointing to a period of uncharacteristically stable price action in the crypto sphere.

Markets have taken a stronger upturn, even as onlookers have been pointing to a period of uncharacteristically stable price action in the crypto sphere 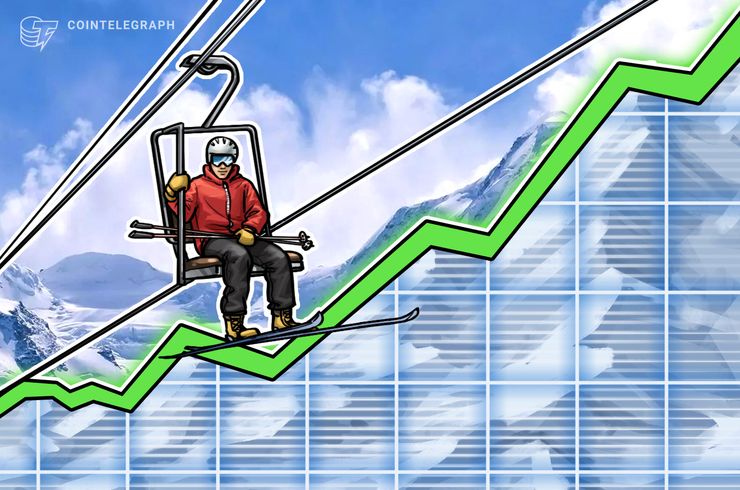 Monday, Oct. 8: markets have taken a near-unanimous upturn, even as onlookers have been pointing to a period of uncharacteristically stable price action in the crypto sphere. Virtually all the top 100 cryptocurrencies are seeing solid growth on the day, as data from Coin360 shows. 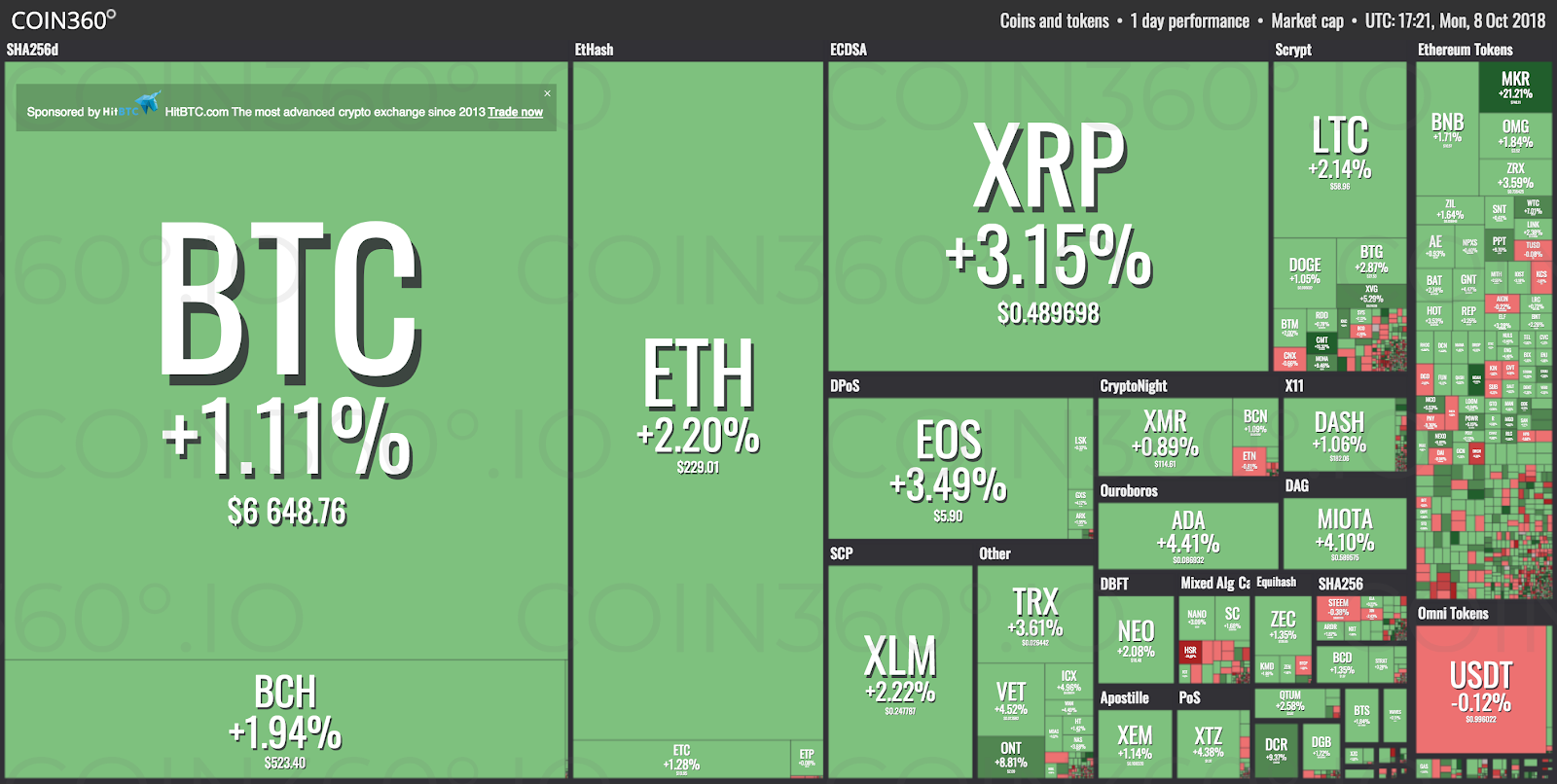 Bitcoin (BTC) has seen a relatively strong boost, by press time growing almost 2 percent on the day to trade solidly above the $6,600 mark at $6,664. The breakthrough to a higher price point comes after several days of sideways trading, with one crypto persona quipped Oct. 5 that “Bitcoin [had] decided to be the ultimate stablecoin.”

That same day, a Bloomberg article underscored the top coin’s marked price stability of late, proclaiming that Bitcoin had “hit an inflection point with volatility at a 17-month low.” The flipside to such steadiness, the article noted, is lower trading volumes, due to lower “speculative involvement.”

While some of Bloomberg’s sources considered stability a sign of “maturity,” others deemed the low volatility-volume couple a “capitulation”: a parallel article went so far as to suggest that Bitcoin is now “boring” – a rarely uttered alliteration in crypto news. The latter article noted that Bitcoin has traded with a $732 range since Sept. 7, “swinging no more than 12 percent from peak to trough,” citing compiled data from Bitstamp.

On its weekly chart, Bitcoin is now just over one percent in the green, with monthly growth a strong 8 percent. 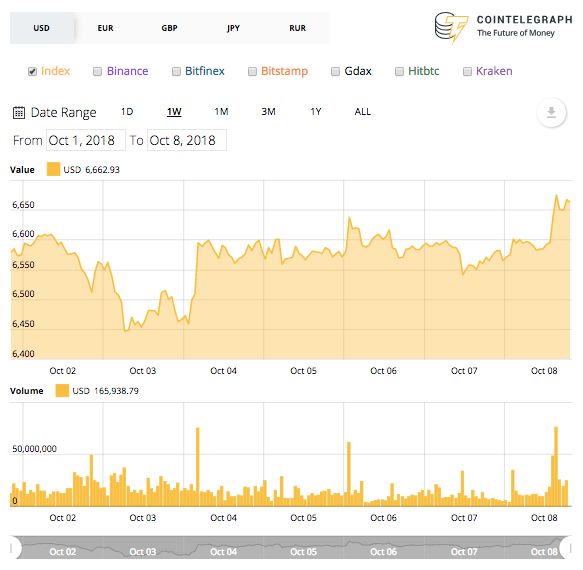 Ethereum (ETH) is similarly seeing strong action on the day, up almost 3 percent to trade at $230. Despite a dip as low as $218 early on its weekly chart, the leading altcoin has seen several days trading range-bound between $220-225.

On the week, Ethereum is around 0.6 percent in the red; monthly growth is close to 17 percent. 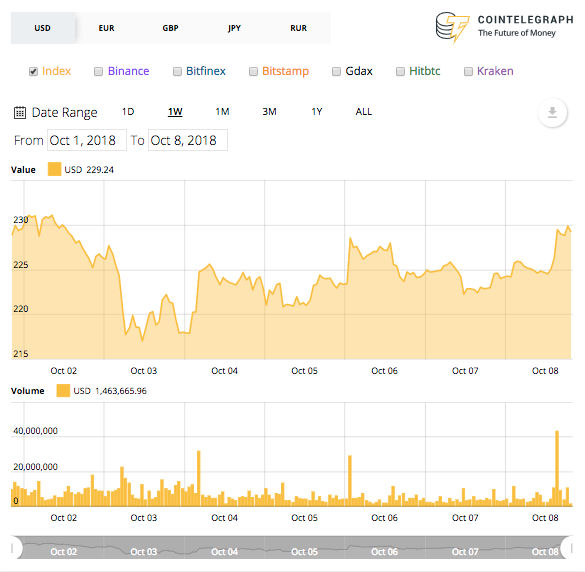 Ripple (XRP) has outflanked both Bitcoin and Ethereum, growing an impressive 3.35 percent on the day to trade at $0.49. The asset saw major price momentum in September, growing so rapidly it briefly knocked Ethereum off its long-standing second spot ranking on CoinMarketCap’s listings.

Until today’s growth, Ripple had however tapered off throughout most of early October: the token remains a stark 14.5 percent in the red on its weekly chart. On the month, its gains are, however, an astonishing almost 70 percent. 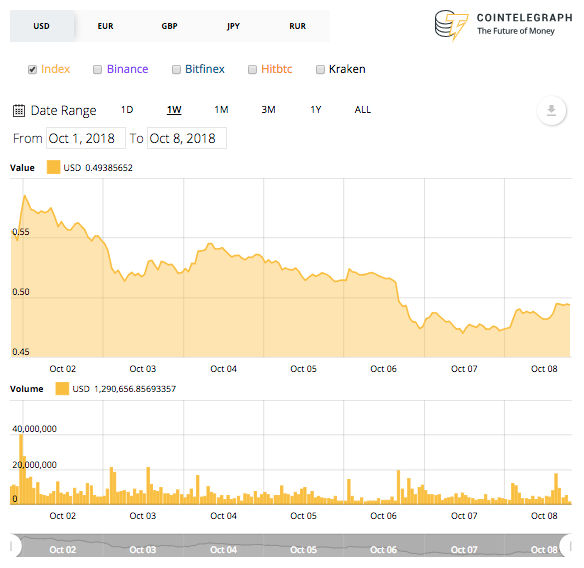