All of the top 20 cryptos by market cap are in the red on Monday, while the U.S. stock market has seen a wave of green.

Monday, March 4 — crypto markets have slid today, with Bitcoin (BTC) having failed to hold the $3,800 price point. All of the top 20 coins by market cap are seeing major losses, according to CoinMarketCap. 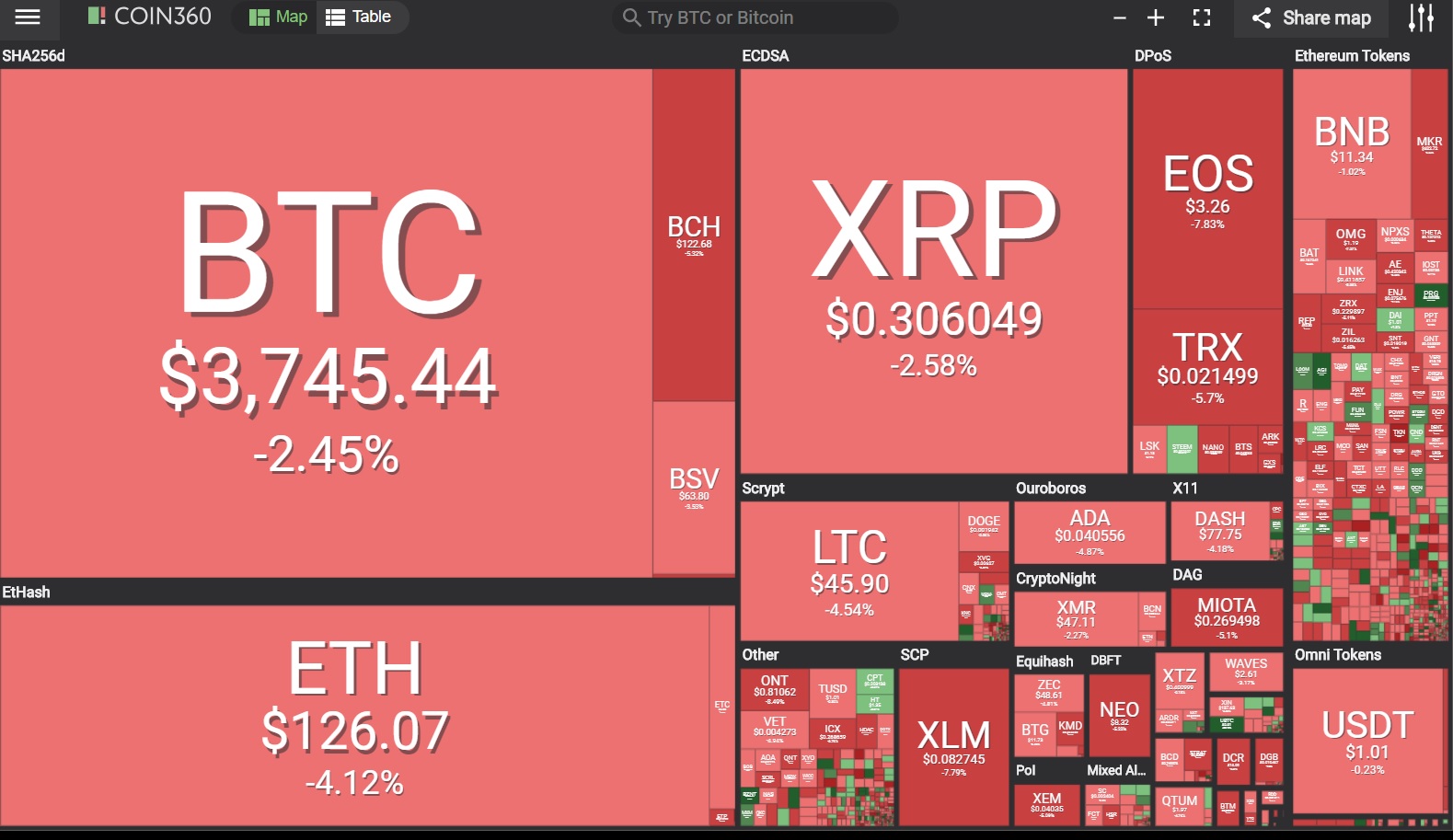 While all major markets are seeing red, Bitcoin is seeing a slight increase in terms of dominance on the market. Bitcoin’s market cap has grown around 0.4 percent today, according to CoinMarketCap.

Ethereum (ETH), the second-ranked cryptocurrency by market cap, is down 4.6 percent over the day, trading at around $127.14. The top altcoin is seeing a massive decline over the past 7 days, down around 9 percent.

Ripple (XRP), the third-top cryptocurrency by market cap, is trading at $0.305, down 2.7 percent over the past 24 hours at press time. Over the past 7 days, Ripple is down about 3 percent.

EOS (EOS), ranked fourth, is seeing the biggest losses among the top 20 coins. The altcoin is down 8 percent over the day, while losses over the week account for around 9 percent.

Litecoin (LTC) and Binance Coin (BNB) are the only two coins that hold weekly gains at press time. BNB is up around 13 percent over the past 7 days, while Litecoin holds around 1.4 percent gains on the week.

Total market capitalization dropped to $125 billion today after hovering around $130 billion earlier on the week. Daily trade volume is around $27 billion at press time.

Yesterday, Cointelegraph reported on new research suggesting that Canadian crypto exchange QuadrigaCX allegedly stored a large amount of Ethereum in other crypto exchanges. According to the findings, QuadrigaCX had accounts on major exchanges such as Bitfinex and Poloniex, with funds worth over $100 million.

In February, Cointelegraph reported that the exchange was missing $145 million in digital assets after the death of its founder, who had allegedly stored the exchange’s crypto holdings on cold wallets.

The United States stock market rose today as the U.S.-China trade talks approached their end, bringing more anticipation for a deal, CNBC reports. Earlier today, the Dow Jones Industrial Average (DJIA) climbed 44 points as Caterpillar and Apple outperformed. At press time, DJIA is up 19 points with the growth of about 0.1 percent, while the S&P 500 and the Nasdaq Composite increased 0.25 and 0.33 percent respectively.

Similarly, amidst the reports about the U.S. and China finalizing trade talks, oil prices recovered today, also supported by OPEC output cuts. At press time, West Texas Intermediate (WTI) crude oil is up more than 1.7 percent, while international benchmark Brent crude is up about 1.5 percent, according to Oilprice.com.

On the other hand, gold prices have seen a decline today, experiencing the lowest point over a more than five week period as the U.S. dollar was firm and investors allegedly opted for riskier assets in anticipation for the end of U.S.-China trade talks, according to CNBC. Spot gold is down 0.7 percent to $1,284 per ounce at press time, while gold futures have tumbled more than 1 percent to $1,285 per ounce.

You can now get detailed analysis of cryptocurrency markets on Cointelegraph’s YouTube page. Today experts consider the effect of volumes on price and break down Bitcoin’s price chart.