Major Crypto Exchange in Korea Shut Down in April: 2018 Was a Nightmare for Most

A major crypto exchange in South Korea has shut down, showing the intensity of the brutal 16-month bear market that caused a wide range of issues for crypto businesses.

The shutdown of Coinnest on April 18, one of the major crypto exchanges in South Korea, showcased the intense brutality of the 16-month bear market, which came crashing down as soon as bitcoin achieved an all-time high at a price of $20,000.

While not many major crypto exchanges have closed their operations in the past year, most exchanges — with the exception of some platforms considered to have real daily volumes by Bitwise Asset Management — have struggled to maintain a stable inflow of revenue.

The bear market was particularly difficult for small exchanges that are known to strategically inflate their volumes to appeal to users on leading market data platforms like CoinMarketCap.

Profit margins sharply dropped due to an overall drop in daily volumes for smaller exchanges such as Korbit in South Korea, creating a difficult environment to survive in.

Cryptocurrency exchanges generate the overwhelming majority of their revenues through fees that occur when trades are executed. When daily volumes of crypto assets drop, exchanges suffer a dip in revenue.

Top crypto exchanges in South Korea have reported contrasting results for April, with Upbit pulling in over $110 million in profit and Bithumb suffering over $150 million in losses. 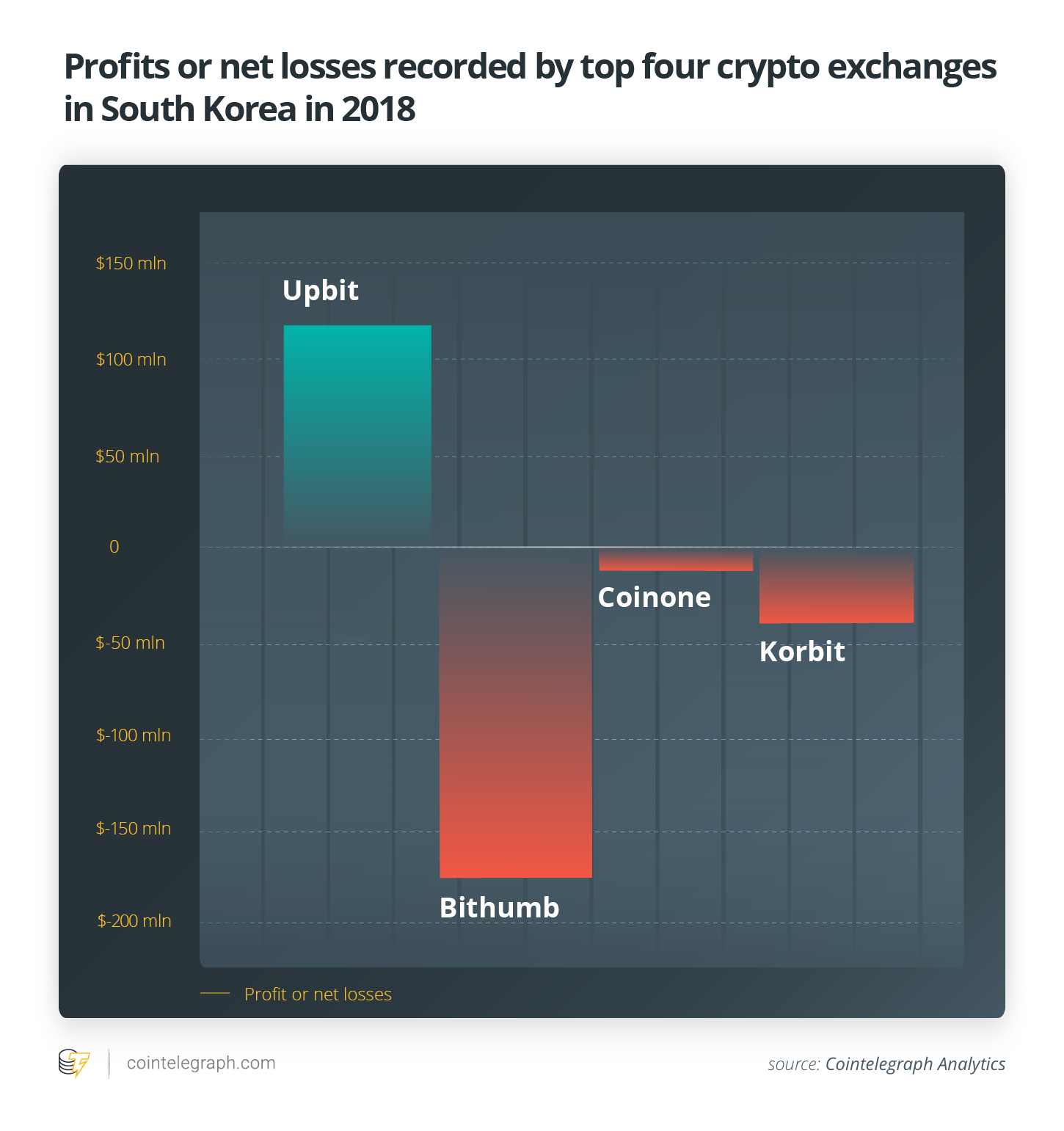 Why crypto exchanges suffered during the bear market, especially in South Korea

According to a report from The Block, Binance generated a quarterly profit of around $71 million from January to March 2019, nearing the annual operating profit of Upbit, South Korea’s largest crypto exchange.

Upbit is the only exchange among the top five cryptocurrency exchanges in South Korea’s local crypto exchange market to record a profit in 2018.

Bithumb recorded a net loss of $175 million, and other leading platforms like Coinone and Korbit also recorded relatively large losses in 2018 to the tune of tens of millions of dollars.

Although a Bithumb representative told MK, a mainstream media outlet in South Korea, that the business of the exchange remains solid, a $175 million loss could have been critical for the exchange if it had not reportedly secured around $190 million in new funding:

"Even during a phase in which the cryptocurrency market is struggling, Bithumb is sustaining a solid business with unique services and global market dominance. Bithumb will put in all efforts in protecting user funds.”

Other challenges: no new registrations

2018 was particularly hard for exchanges in South Korea because exchanges were prohibited from accepting new registrations for awhile. As such, exchanges experienced a substantial decline in revenues.

Last year was challenging even for Upbit, the country’s dominant leader in the cryptocurrency exchange market.

A representative of Dunamu, the parent company of Upbit, said that the exchange was able to operate healthily throughout 2018 due to the company’s strategy of reducing marketing efforts and resources by employing a cautious approach in management.

“In comparison to other exchanges, Upbit operated with caution by reducing marketing efforts and overall manpower because new registrations were blocked. Most of the revenues recorded by Upbit in 2018 were generated in the first quarter of 2018 when the cryptocurrency market was hot. Upbit actually recorded an increase in revenues and operating profit since 2017.”

For smaller platforms like Coinnest, it was virtually impossible to expect any substantial operating income because of the sentiment around the market and the state of the cryptocurrency exchange market in South Korea.

Moreover, on Oct. 18, the former CEO of Coinnest was sentenced to three years in prison and a $2.6 million fine for fraud and for extracting user funds for personal financial gain. According to court documents, the former CEO and two other executives stole more than $30 million from users and reportedly faked around $400 million in volume.

“It is a natural result of a decrease in trading volume. Both regulatory issues and business decisions have served as a background for this decision.”

Small exchanges across major markets like Japan and South Korea often get acquired by larger companies or declare bankruptcy because of their focus on short-term profitability.

For exchanges, a strong network effect is crucial for sustainability. Hence, apart from the top five exchanges in every major region, most exchanges consistently struggle to generate profits.

In a bear market, the situation gets worse for both small and large exchanges, as seen in the performance of Coinbase in 2018.

On April 18, Reuters reported that Coinbase recorded an annual revenue of $520 million in 2018, which would normally be considered a healthy figure coming off of a brutal 85% correction of crypto assets.

But, Coinbase is one of the biggest exchanges in the global market, and it failed to reach its projection by 60%:

Net revenues of 520 million dollars with a ~40%+ profit margin for the year of 2018 is beyond excellent! Congratulations @coinbase team.

Bloomberg said in October 2018 that Coinbase expected an annual revenue of $1.3 billion in 2018 despite the correction of the market. Given that the document was obtained by Bloomberg late last year, it is likely that the last quarter was distinctly agonizing for exchanges.

Coinbase missed its annual revenue projection by a staggering 60% even with the continuous efforts of the exchange to increase the volume of the platform through the addition of new tokens and crypto assets.

Throughout the past two years, major exchanges in strictly regulated markets, such as the United States, refrained from prematurely listing tokens due to regulatory uncertainty around the nature of tokens.

In April alone, Coinbase listed tokens from Maker (DAI), Augur (REP) and EOSIO (EOS) on Coinbase Pro, following the listing of Stellar’s lumens (XLM) and the highly anticipated support for XRP, the cryptocurrency developed by Ripple.

The Coinbase team said after listing lumens in March:

“One of the most common requests we receive from customers is to be able to trade more assets on our platform. With the recent announcement of our new listing process, we anticipate listing more assets over time that meet our standards.”

Which other exchanges have shut down?

In South Korea alone, there are hundreds of cryptocurrency exchanges, with some reports estimating the number of exchanges in the country surpasses 100. Most of these exchanges are small companies that aim to drive short-term profits with aggressive token listings.

Due to a lack of resources, when minor exchanges are hit with security breaches, hacking attempts or a drastic drop in trading volume in the cryptocurrency exchange market, they are unable to cope with changes in market conditions.

Throughout the past 16 months, exchanges like Coinnest, Coinpulse and Liqui have shut down as a result of liquidity issues, and bigger platforms including QuadrigaCX, Coincheck and Zaif have closed following high-profile security breaches.

While Coincheck and Zaif have reopened in Japan with the approval of the Financial Services Agency (FSA), the two firms needed a lifeline from bigger conglomerates to fully compensate all user funds.

Zaif reopened on April 19 after securing a deal with Fisco worth around $44.5 million to compensate users affected by the hack.

“After that, on condition of financial support of approximately 5 billion yen, transfer of Zaif business from Tech Bureau Co., Ltd. to us was decided. In addition, we have asked customers via the Internet and by telephone etc. for the procedures for consenting to business succession,” Fisco team said.

Why small exchanges are always vulnerable

Even Coincheck, which was once the largest cryptocurrency exchange in Japan, did not have proper in-house security experts to oversee the platform:

Main takeaways from Coincheck press conf:
- only NEM impacted
- plans to continue operating, restart trading
- not clear on plan to repay customers
- no multisig💀
- wouldn’t admit security was weak
- not sure how hacked, if domestic or foreign hackers
- CEO barely spoke

“We were aware we didn’t have enough people working on internal checks, management and system risk. We strived to expand using headhunters and agencies, but ended up in this situation.”

Although an investigation is said to be ongoing in the QuadrigaCX scandal — during which Gerald Cotten, the CEO of the exchange, lost $190 million in crypto and other funds after he reportedly passed away with private keys — the Coinbase team speculated that QuadrigaCX may have also been affected by the bear market and faced liquidity issues. Brian Armstrong, the CEO of Coinbase, said:

“QCX was one of the oldest exchanges in existence (founded in 2013). If they planned an exit scam, it likely would have been timed better. They suffered a multimillion dollar bug in June 2017. This is when we start to see movement of funds to ‘cold storages.’”

Patterns of sends from cold storage suggest they tried keeping the exchange afloat, and maybe attempted to trade their way out of the hole. Liquidity dried out and the bear market of 2018 may have caught up with them. The sequence of events suggests this was a mismanagement with a later attempt to cover it up.

Exchange closures will decline as the industry matures

The crypto bear market is crucial because it allows the industry to settle down, reflect, escape the speculative mania phase and rebuild the infrastructure around the market.

During an extended correction, the prices of crypto assets plummet and the volume of the market drops, leaving many low-quality projects and exchanges with a few options.

The cycle of the crypto market of speculation-correction-build-rally improves the quality of the industry and focuses the resources, capital and labor within the sector to quality companies.