Proof-of-Authority Algorithm Use Cases Grow: From Pharma to Games

While the proof-of-authority consensus algorithm is turning into perhaps one of the most mature versions of blockchain technology. It is faster than other algorithms, more scalable, and does not depend on mining. Market leaders Walmart and GE Aviation are using PoA to track supply chains, and Microsoft has created a whole line of PoA-based enterprise products.

Nevertheless, there is something in this innovative mechanism that contradicts the basic principles of cryptocurrencies — decentralization and anonymity. Cointelegraph talked to technology companies to find out how PoA products work, and what benefits the use of this algorithm brings them.

How it differs from other algorithms

The PoA consensus algorithm stands apart from the rest of the algorithms, and unlike proof-of-work and proof-of-stake, it does not require miners to be involved at all. In a blockchain network based on PoA, all transactions and blocks are processed by approved accounts (validators) that replace miners.

As a result, there is no need to spend vast amounts of resources to maintain the network’s performance, making such platforms extremely cheap to maintain. In this context, PoA is currently being implemented as a more efficient alternative to older counterparts, as it is capable of performing more transactions per second.

Such blockchains are also much faster than the ones running on the PoW consensus algorithm. For example, blocks in the POA Network are generated once every five seconds, in VeChain — once every 10 seconds, and every 15 seconds in Ethereum Express. 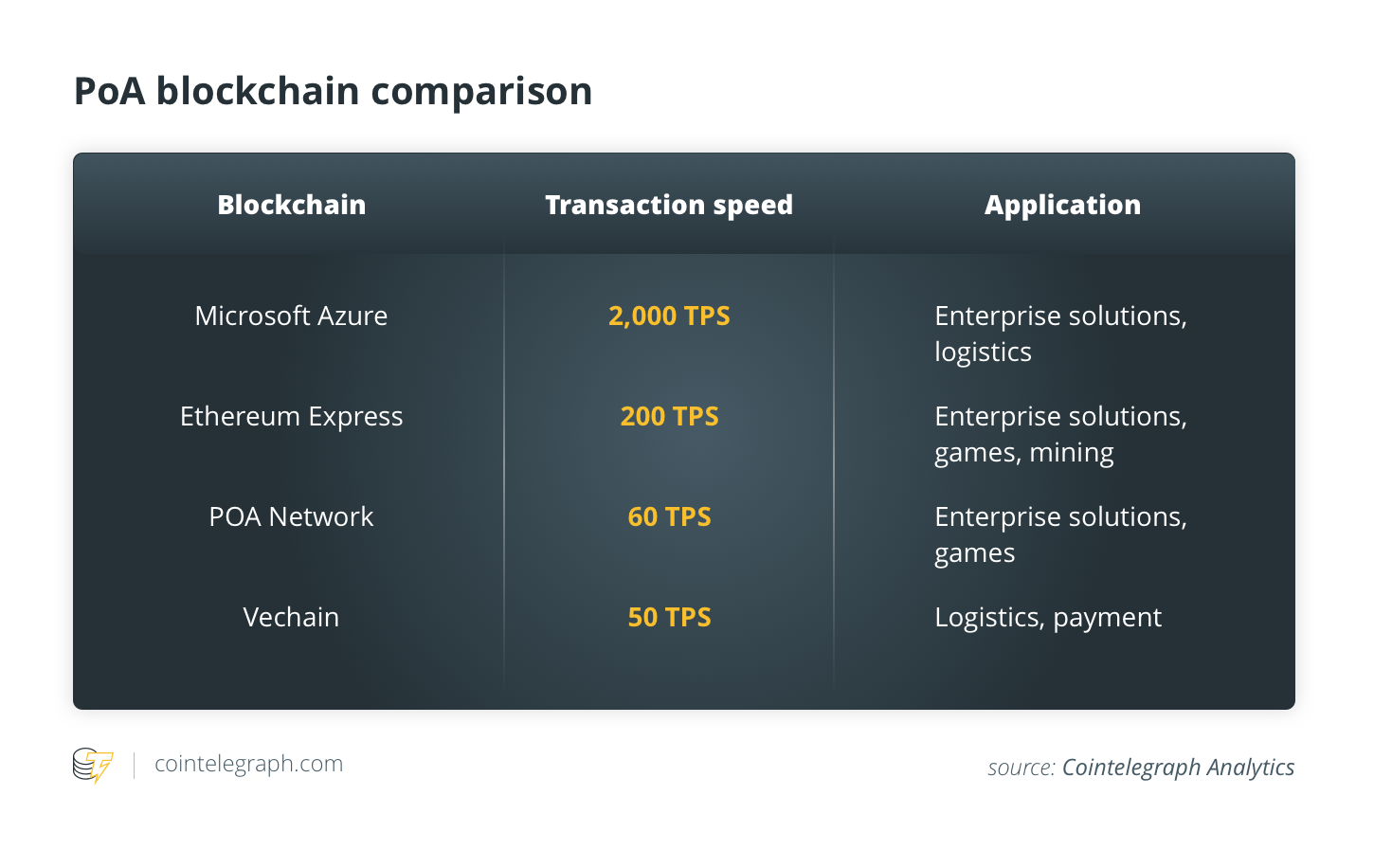 As the name implies, in PoA, the authority of the participant is the guarantor of the transaction’s validity. Therefore, such a network is protected against manipulation by the owners of richer nodes. This is different to PoS, where the more tokens a user has, the more likely they are to form a new block. In addition, PoA validators must pass a series of checks to confirm their reliability.

All this makes PoA well-suited for private, or, as they are also called, corporate blockchains. Such networks involve a limited number of participants who are familiar with each other. In this area, the reputation of the node is crucial, with a validator’s reputation being its own main value and capital. Vlad Miller, CEO of Ethereum Express — a cross-platform working on the PoA algorithm — told Cointelegraph:

“One of the significant advantages of such platforms is the ability to scale horizontally. PoA services can combine computing power for joint transaction processing, thus increasing the throughput of the entire network.”

Notaries instead of miners

Each PoA network has its own principles for assigning validators. For example, in the POA Network — a sidechain created on top of the Ethereum blockchain — owners of nodes must be United States citizens and have a valid public notary license.

The reliability of such individuals is associated with their professional activities for several reasons: The notary data is publicly available, validators cannot refuse to verify their identity, and the presence of a notary license guarantees his qualification and the absence of a criminal record.

The transaction validation process itself implies that each block is attributed to a validators’ identity. Therefore, if they break the network rules — for example, by not accepting a transaction to a specific address — participants of the network can resort to legal instruments to settle the problem.

Notably, any decision to modify the network — whether it’s a hard fork or a small upgrade — is said to be signed as a legal document and is recognizable in a court system. This, according to the POA Network developers, allows members of the network to be protected and helps to better decide how to deal with upcoming changes.

However, the involvement of notaries in the system does not mean that it can be used exclusively in the field of documentation or legal processes. Small and medium-sized companies can use the platform in any processes that require a high transaction processing speed and low commission.

To date, the POA Network includes twelve validators, whose names are disclosed. The profiles of at least eight of them can be found on LinkedIn alone. No one can know who the person behind the network is, both literally and figuratively.

One of the use cases identified by using the PoA algorithm is the development of online games that can be scaled significantly while obtaining a consensus of authority. For gamers, the advantage is the minimal transaction cost offered by PoA-based solutions. In addition, the PoA network is three times faster than Ethereum, thereby decreasing server workload.

For example, the Ethereum Express team, together with a gaming company, launched a pilot project achieving 1,000 transactions per block (five seconds) and a network capacity of 200 TPS. The Ethereum Express developers noted that in the future, they will be able to increase the processing speed of transactions in the network by raising the throughput of each block.

Meanwhile, Microsoft has integrated a PoA-based protocol to manage content rights and royalties on Xbox Live. Anir Kaushik, engineer at Microsoft, shared the results of this endeavor with Cointelegraph:

“Microsoft provides sales reports to publishers, which usually takes up to 45 days or more. By writing the transactions to the PoA-based Quorum protocol, transparency is improved and publishers can access data almost in real-time. The results include a 99% reduction in transaction settlement times, from 45 days to the order of minutes, and a 66% decrease in transaction costs.”

The recently introduced TokenBridge technology is another innovation brought by the POA Network. It allows players to easily transfer tokens and other assets from one blockchain to another. In practice, this means that game items can be easily transferred from one game to another.

Igor Barinov, technical lead at POA Network, explained to Cointelegraph that TokenBridge is to be integrated in several games like Clovers Network, allowing gamers to get access to liquidity of marketplaces or exchange items for ethers. 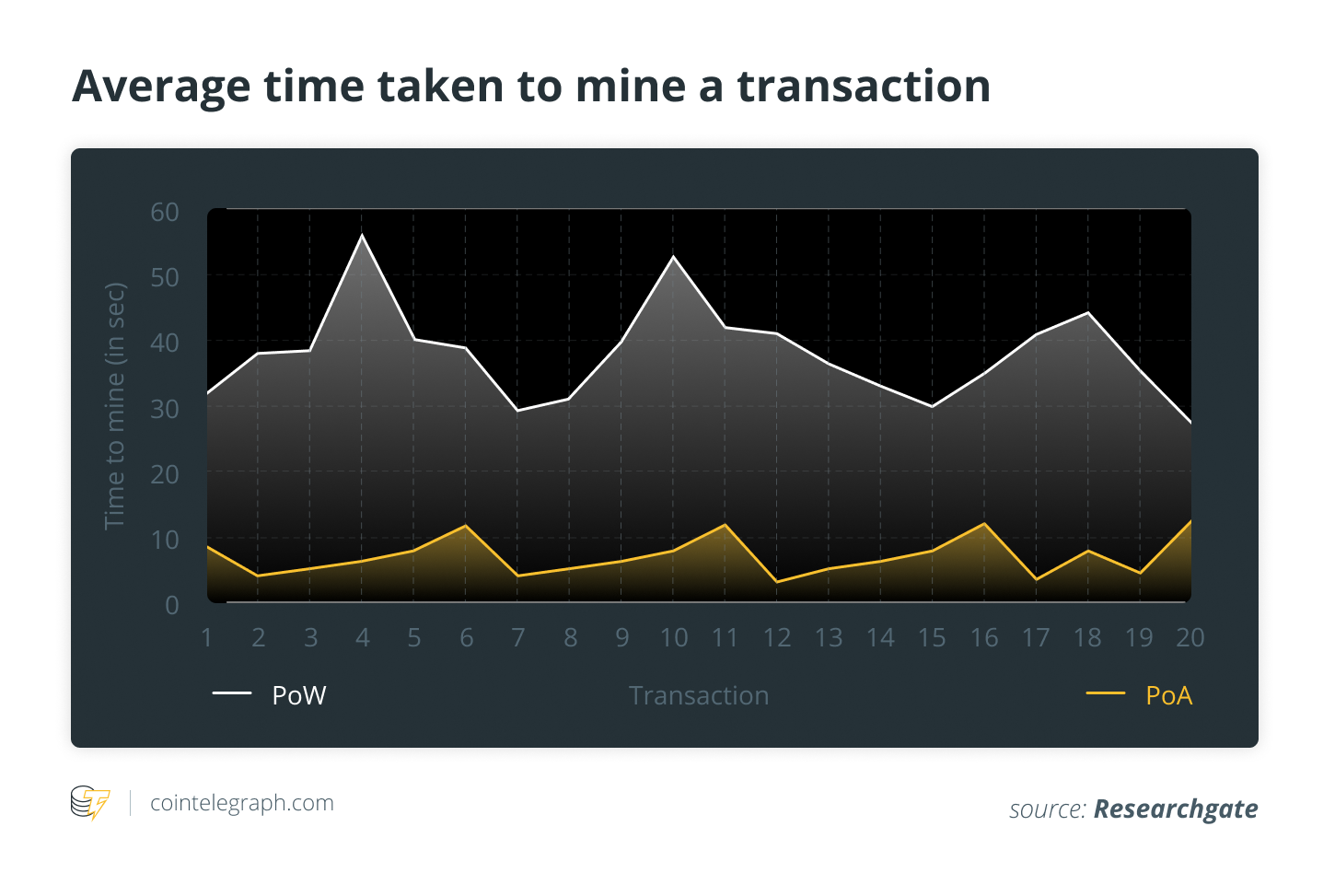 While these solutions use the PoA consensus algorithm to deliver game products to customers, the gamers themselves of Ethereum Express are its validators. The platform is built on a self-regulatory system where the community acts like a middleman, since it is interested in transparency and reliability of operations in the system. By assigning the community members voting rights, the EEX developers attempted to solve one of the main problems of the game and gambling industry — manipulation.

For gambling games, EEX developed the PoA-based decentralized management infrastructure, where the most loyal users can audit the system to look for possible fraud. On the other hand, the complete transparency of the data ensured through the self-regulated structure allows players to independently verify the game operator by checking its bank or licenses.

One of the main applications for PoA is the logistics sector, which involves product supply chain tracking and verification of goods and components. The transparency and speed of the PoA algorithm allow logistics operators to track any products in real-time for maximum efficiency of deliveries.

The aviation industry is one of the use cases where the safety of passengers depends on the quality of spare parts and thus proper logistics. A report issued by PwC in 2019 claims that using blockchain to improve logistics and routine efficiency could boost the aviation industry’s revenue by as much as 4% annually, or $40 billion. According to analysts, it could also cut maintenance, repair and overhaul costs by about 5% annually, or $3.5 billion.

An example of such application is the use of Microsoft Azure’s Blockchain in GE Aviation, an aircraft manufacturer. The developed blockchain solution leverages PoA to improve how parts and repairs are tracked over their lifetime. David Havera, Blockchain Leader at GE Aviation’s Digital Group, said:

“Before, we had to manually pull historical documentation on where a part was manufactured and who repaired it, which took months to years. Now we just scan a part and have that story in real time at our fingertips.”

The pharmaceuticals industry seems to also be in need of blockchain tracking technologies. Retail giant Walmart has already incorporated MediLedger into its tracking system that will allow increasing the efficiency of supply chain management.

The MediLedger project uses an enterprise-suited version of the Ethereum blockchain, which is built using a modified Parity client and the PoA algorithm mechanism to track the origin of medicine.

The company planned to launch a pilot project in conjunction with the U.S. Food and Drug Administration in June 2019 and is currently testing various approaches with the goal of creating an interoperable electronic system for tracking and validating drugs by 2023.

Consumer goods, such as food products, are also being transferred onto blockchain in their supply chains — and Walmart is once again in the lead. The giant’s Chinese branch has teamed up with PwC and VeChain to track the movement of goods.

On June 25, Walmart China reported that by 2020, tracking of products via blockchain technology will encompass over 40% of all of their vegetable sales and 12.5% of seafood product sales.

Walmart is not alone in its strive for blockchain application in food product tracking, as the United Nations World Food Program has also applied the Parity Ethereum network to track deliveries and accounting for balances without the need for a third-party financial services provider.

The PoA algorithm has found its way into everyday commerce as well, with the Bancor project applying it in Kenya to alleviate poverty by providing local communities with the ability to buy and sell local currencies using credit cards or popular cryptocurrencies, involving 1,000 businesses and 20 schools. The project, launched on July 5, 2018, fosters entrepreneurship and helps locals generate income.

The Bancor founding group previously launched a number of local currency pilots serving various communities. Among them is the currency for a local community of mothers that processed more than 1,000 transactions per day at its peak, although its activity was eventually reduced, since the currency was not transferred outside the group.

The energy sector is also applying the PoA algorithm with the Energy Web Foundation (EWF) launching its own blockchain for a number of major energy companies, such as Mercados Electricos. The application will allow companies to significantly increase energy efficiency and ensure regulatory compliance.

According to the founders of the company, getting started is extremely easy: Anyone can download the program and start using the smart grid. In addition, each smart home connected to blockchain will allegedly receive its identification number with a wallet tied to it. Those individual wallets can be tied to an electric vehicle and its charging station.

While today’s owners of electric cars have to use a lot of applications from various charging stations, with blockchain, a station can automatically find out who the driver is and whose wallet should be used for payment by using the car’s ID number, as stated by the EWF.

In the long run, blockchain can enable decentralized energy trading. If consumers begin to generate more energy on their solar roofs than they need, they will be able to sell the surplus through a distributed registry system at real-time regulated prices.

For corporate use only

Although PoA-based blockchains forgo decentralization principles and use publicly known validators for processing transactions, various use cases show that this algorithm can be a good tool in the corporate environment, which it is oriented toward. Regarding this, Miller from Ethereum Express said:

“Due to the decentralized nature of most blockchain networks, the Proof-of-Stake consensus algorithm is not always suitable for certain enterprises and corporations. In contrast, PoA-based systems may represent the best solution for private blockchains, since the performance of this algorithm is significantly higher.”

Microsoft’s Kaushik shared the same point of view, adding that companies that integrate PoA in their processes get “enterprise compatibility at the risk of losing some degree of decentralization, while still maintaining the benefit of efficient multi-party collaboration.”

Likewise, it can be useful for the government entities, according to Joseph Edwards, head of research for Enigma Securities. He added that, “if a local government or a retail supply chain has a blockchain, it's usually going to be PoA.”