Quantum computers will not kill blockchain, but they might trigger fundamental changes in underlying cryptography.

The major selling point of blockchain and its applications is that cryptographically secured distributed ledgers are virtually “unbreakable” under normal circumstances, given the current state of computational technology. Its validity, however, is heavily dependent on the “state of technology” assumption. Should a paradigmatic shift in computing occur, contemporary blockchain-based systems may become vulnerable to threats not accounted for in their design. But how urgent is the threat of this happening any time soon?

The strides that physicists have been making for the last three decades toward building an operational quantum computer could soon contribute to such a shift. As the milestone called “quantum supremacy,” in which a quantum computer outperforms a traditional computer on a specific task, could be reached any day now, the question of whether prospective quantum-based devices are capable of “killing” blockchain comes into the spotlight.

A primer on quantum computing

A quantum computer is any device that uses the principles of quantum mechanics to perform calculations. To store and manipulate information, regular computers use binary units called bits, which can represent one of two possible states: 0 or 1. Quantum machines rely on quantum bits (or qubits), which can be both a 0 and 1 at the same time. This phenomenon, called superposition, allows such devices to perform certain tasks much faster than their bit-based counterparts. 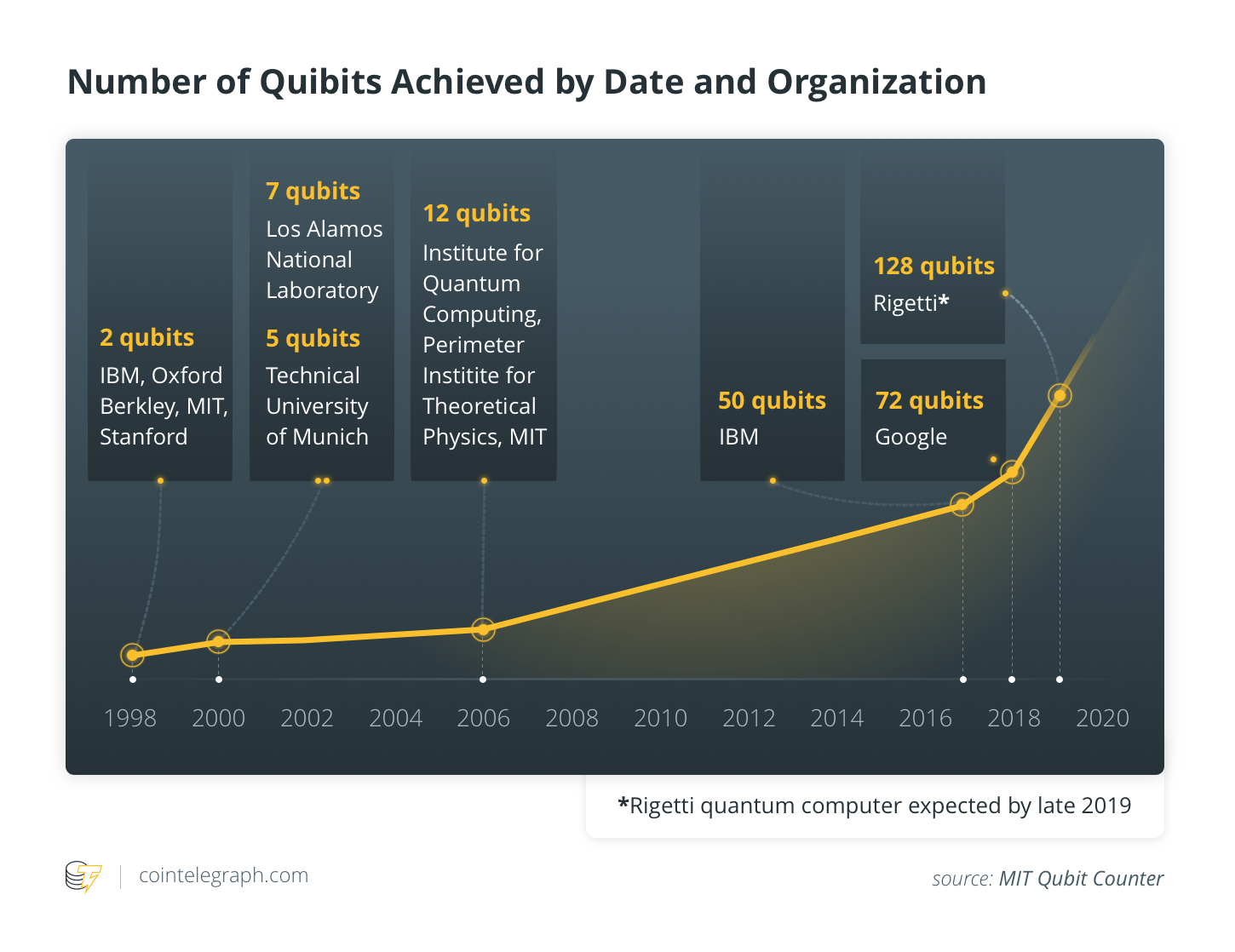 Another foundational term in quantum theory is entanglement. When two particles are entangled, they exist in the same quantum state, and change in the state if one prompts its peer to change accordingly, no matter how far apart the two are in physical space. Pairing qubits this way leads to the exponential growth in the quantum computer’s computational power.

The state of superposition, which is necessary to perform calculations, is difficult to achieve and enormously hard to maintain. Physicists use laser and microwave beams to put qubits in this working state and then employ an array of techniques to preserve it from the slightest temperature fluctuations, noises and electromagnetic waves. Current quantum computers are extremely error-prone due to the fragility of the working condition, which dissipates in a process called decoherence before most operations can be executed.

Quantum computational power is determined by how many qubits a machine can simultaneously leverage. Starting with a humble two qubits achieved in the first experiments in the late 1990s, the most powerful quantum computer today, operated by Google, can use up to 72 qubits.

Acknowledging all the conventional reservations, the idea of blockchains’ immutability and unmatched security is widely accepted: It underlies the public’s trust in digital assets and promotes mass adoption. However, the advent of quantum computing could potentially jeopardize the integrity of public-key cryptography, which is the backbone of blockchain security.

While the range of quantum computers’ potential applications is vast, the one most relevant in the context of blockchain technology and cryptography more generally is the capacity to run specific algorithms much faster than any existing supercomputer. One of the most widely discussed presumed use cases is running the famous Shor’s algorithm for factor decomposition, which could potentially render many contemporary encryption techniques obsolete.

As a group of researchers from the Russian Quantum Center observed in an article for the journal Nature, one potential risk stems from the fact that blockchain security heavily relies on one-way mathematical functions — the ones that are easy to run, yet much more difficult to calculate in reverse. Such functions are used to both generate digital signatures and validate transactions on the ledger.

A criminal equipped with a functional quantum device would be able to perform reverse calculations immensely faster, which would enable them to forge signatures, impersonate other users and gain access to their digital assets. In the context of mining, such a malicious actor could take over the process of updating the ledger, manipulate transaction history and double-spend coins.

The Russian researchers suggested that the architects of encrypted systems should start taking precautions against this threat immediately. One solution could be replacing conventional digital signatures with quantum-resistant cryptography — the kind of security algorithms specifically designed to withstand an attack from a sufficiently powerful quantum computer. Another remedy, the Russian physicists proposed, will only be available with the advent of a quantum internet, which is still several decades away. This prospective wireless communication architecture, based on the connection between remote entangled quantum particles, will unlock a wealth of new blockchain models and designs.

This is somewhat consonant with the mind-bending idea that Del Rajan and Matt Visser from the Victoria University in New Zealand expressed in a recent research paper. They proposed to forgo the use of quantum cryptography and leap straight to making blockchain a quantum-based system itself. Their model describes a blockchain based on qubits entangled not just in space, but also in time. The attempt to retrospectively alter the record of transactions, encoded by the history of a single particle’s states over time, would be impossible without destroying the particle altogether. The realization of this model, however, would be impossible until a quantum internet is up and running.

While the futuristic solutions that academics propose may be decades away, a lot of hands-on research and development in quantum computing and quantum cryptography is happening right now. The experts working with quantum computing applications surveyed by Cointelegraph differed in their views on how immediate the quantum threat is. Yaniv Altshuler, an MIT researcher and CEO and co-founder of predictive analytics platform Endor Protocol, said:

“Quantum computers are becoming incredibly powerful, and they are advancing faster than most people expected. However, their capabilities will not break the blockchain. Each year, when new hardware is released, it rekindles concerns about the blockchain’s integrity, but there is no evidence that quantum computing can compromise the blockchain.”

Stewart Allen, the chief operating officer at quantum computing firm IonQ, believes that, by the time a quantum computer grows to become sufficiently powerful to imperil the integrity of today’s blockchains, security systems will have moved to algorithms capable of containing them:

Others, however, did not quite share this optimistic view.

“If somebody has a quantum based mining pool, it’s easy to dominate others. [...]Today we do not have any quantum-based mining machines. On the other hand, a lot of companies have been working on quantum-based computing technology. We believe that in the next five years it could be real. Maybe less, who knows?”

Rakesh Ramachandran, CEO and co-founder of QBRICS Inc, emphasized that quantum computing is poised to have an effect in virtually every sphere in which cryptography is used. In the case of blockchain technology, he said, we might expect a systemic shift:

“Quantum computers will be redefining cryptography of not only blockchain but wherever there is an application of cryptography including simple things like an online banking website.  There is a considerable research and work being done to mitigate the effects and move to quantum-resistant cryptography or post-quantum cryptography.

“However, the challenge of blockchain is not just about the threat that quantum computing represents but scope of how blockchain will migrate to the new version of cryptography.”

All experts provided surprisingly similar estimates of how much time we have before quantum computers can pose a threat to blockchains’ integrity, varying within a range from five to 10 years. They were also fairly consistent in their recipes for dealing with potential quantum-powered attacks: Most agree that a gradual shift to quantum-resistant cryptography will be necessary, as well as building infrastructure that will support it. Blockchains will have to evolve, but it is unlikely that quantum computing technology will fundamentally threaten their existence.