Crypto markets are mostly in the red, remaining relatively quiet with moderate losses throughout the top-20 coins.

Crypto markets are mostly in the red, remaining relatively quiet with moderate losses throughout the top-20 coins 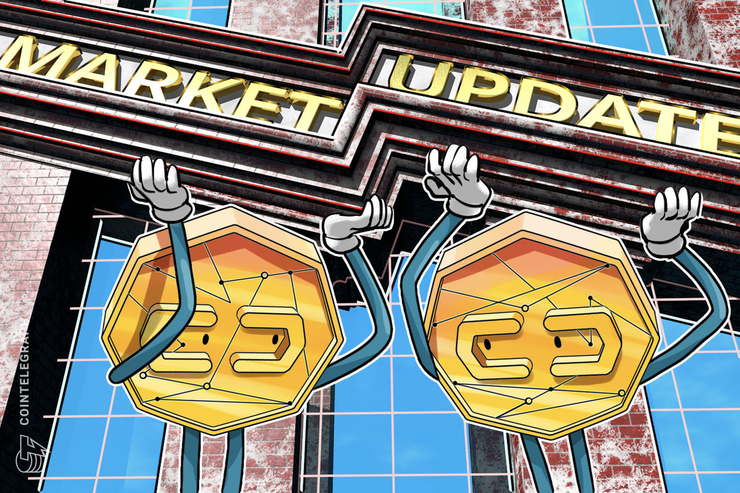 Thursday, Oct. 10 — Following an impressive rally yesterday, major crypto markets have slowed to trade in the red over the past day. Bitcoin (BTC) has stuck to $8,600, while other major coins are experiencing a downward trend.

Meanwhile, the trading volume of BTC futures on the Intercontinental Exchange’s Bakkt platform reportedly soared to 224 contracts on Oct. 9 — 796% higher than the previous day, representing an all-time high for the platform.

Top altcoin Ether (ETH) has lost about 0.18% during the past 24 hours and is trading at around $191.84 at press time. In terms of its weekly performance, the altcoin has remained relatively quiet, with moderate gains and losses.

As he said at a conference earlier in the day, the chairman of the United States Commodity Futures Trading Commission believes Ether to be a commodity — and that ETH futures trading is becoming a reality.

XRP has experienced more notable losses over the past day, dropping by more than 3% to trade at around $0.273. The altcoin’s weekly chart is showing its price increasing by a respectable 9.35%, while its monthly gains are 5%.

On Oct. 9, Cointelegraph reported that Ripple Labs, the administrator of blockchain payments network Ripple, came under criticism for allegedly misleading representations that it “discovered” — rather than created — the XRP token.

On the top-20 cryptocurrencies list, only Algorand (ALGO) and Tether (USDT) are trading in the green zone, up by 6.88% and 0.2% respectively. The biggest losers on the day among the top-20 coins are Chainlink (LINK) and Ethereum Classic (ETC) with losses of 4.22% and 3.78% respectively.

Earlier today, cryptocurrency exchange OKEx announced the end of Monero (XMR), DASH, Zcash (ZEC), Horizen (ZEN) and Super Bitcoin (SBTC) trading on its platform. OKEx reports having received a request to end the transaction support and review the compliance with the 'Travel Rules' according to the Financial Action Task Force recommendations.