Deciding to revive FCoin after it shuttered was a long and arduous process that took well over… several days.

The exchange closed down a couple of weeks back. Its management’s sure handling of figures was evident in founder Zhang Jian’s admission that it owed customers somewhere between 7,000 and 13,000 BTC. The gaping hole between those two numbers, at current prices, is something along the lines of $60 million. But what’s a few million between friends when “the route to hell is paved with goodwill”?

It clearly isn’t paved with accountants.

This week, the exchange blamed the closure on “poor auditing,” before announcing plans to reopen only a few days later.

I rarely called out anyone, with exceptions. On Chinese social media, I called FCoin a pyramid scheme in mid 2018. Their founder call his own plan a “better invention than #Bitcoin“. That did it for me. Who would say such a thing? About themselves? except scammers. https://t.co/oNbZyDDkZe

Lost? So are the trans-mining all-stars at FCoin.

Trans-mining, or transaction-fee mining, is a business model that rewards traders by reimbursing their transaction fees in native tokens. FCoin didn’t invent the model, but certainly helped popularize it by redistributing trading fees to users in FT tokens.

The model helps attract users to the platform by essentially paying them to trade. It’s not hard to imagine rational crypto traders running automated bots to make trades as often and as quickly as possible on the FCoin platform.

For the relatively low risk of suffering a loss in the buy/sell positions, traders earned FT tokens for their endeavors. Every trade, as long as it was quick, was likely to be profitable.

Free money, in other words.

A university faculty stacked with rocket surgeons is not required here to figure out that the business model is about as sustainable as — wait, what’s that word for a big triangular structure again? Yeah, one of those, except… 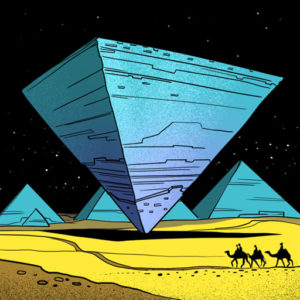 It is most definitely not though, according to Zhang. The closure was not an exit scam. It was insolvency-driven, put down to “a data error + a decision error.”

Yet, the trans-mining all-stars of FCoin have returned with plans to resurrect operations and repay the however-many-millions of dollars it owes users. When? Who knows. As the beleaguered CEO explained:

“This is a problem that is a little too complicated to be explained in a single sentence, the time span is also large, and the two story development lines are advancing and affecting each other at the same time, leading to the final outcome.”

Still lost? Yep. FCoin management probably is too. We struggled to explain why anyone would propose trans-mining as a legitimate business model in a 350-word article. A sentence hardly seems fair.

Unless it’s three years plus time off for good behavior.

Hats off to Brian Armstrong and his team at Coinbase this week for having a slightly clearer view of things, ahem, than the All-Stars.

And not only, in a gesture of largesse, have they shared those measures externally…

They did all that in an atmosphere of rising hysteria, and at the same time as their own government proved unable to get on the same page as the CDC.

Low Ratings Fake News MSDNC (Comcast) & @CNN are doing everything possible to make the Caronavirus look as bad as possible, including panicking markets, if possible. Likewise their incompetent Do Nothing Democrat comrades are all talk, no action. USA in great shape! @CDCgov…..

The Trump response is almost as alarming as the alarmist response. Although it could be that he’s referring to a different ailment. Dyslexia, maybe.

Coinbase was quick to get on the front foot. Its three-step trigger and action elevation plans outlined three different scenarios which would be met with different responses. It will be implementing those steps in its offices in the United States, Japan, Ireland, and the United Kingdom. It has already rolled out its Phase 1 trigger and action plan at its Japanese office.

Panic has struck crypto investors, with the market sell-off this week raising the issue of whether Bitcoin is, or isn’t, a safe haven asset.

With equities and crypto markets battered by COVID-19 fears, Coinbase deserves a nod for its calm professionalism. It would be easy to under- or overreact. Coinbase struck just the right chord.

The company is enjoying a good run. Only last week, the exchange announced it had become a principal Visa member. The tie-up means Coinbase will be able to issue debit cards without involving any intermediaries. It potentially gives the pro-crypto enterprise a novel weapon in spreading the use of cryptocurrency, just as it works to protect its workforce from the spread of the novel coronavirus.

6 Questions for Tongtong Bee of Panony

Bitcoin has changed the world and will continue revolutionizing the financial systems in many countries.

Regulatory clarity for the blockchain industry is key for individuals and businesses to build and innovate confidently. But this must be based on nuanced, balanced approaches.

6 Questions for Pat Duffy of The Giving Block

I’d love to see people stop trying to explain how the pistons fire in the engine block so we can focus more energy on creating a level of crypto access that requires zero technical understanding.