Less than two years after bursting onto the scene, Chinese crypto exchange FCoin has shut down its operations. The platform, founded by Zhang Jian, also says it may be unable to pay the 7,000 to 13,000 Bitcoin (BTC) — about $67 million to $125 million — that is owed to its customers.

Jian, the former chief technology officer of Huobi, tried to explain the reasons for the platform’s insolvency, identifying poor auditing practices. Crypto pundits, however, say there is a more sinister aspect to FCoin’s demise — one that involves a cleverly orchestrated exit scam by the platform’s hierarchy.

An examination of FCoin’s cold wallet shows numerous transfers to other cryptocurrency exchanges. The platform also destroyed a large cache of its eponymous native token, worth about $75 million.

With the platform’s crypto shortfall, it appears users will face significant difficulties in receiving their compensation from FCoin. Jian could also face legal troubles, especially seeing as authorities in Beijing are keen on extending the crypto trading ban to exchanges domiciled overseas but still providing services to Chinese citizens.

In a post published by Jian on Feb. 18, 2020, the FCoin founder attempted to set the record straight concerning the platform shutting down. As previously reported by Cointelegraph, Jian revealed that in addition to going out of business, the platform may not be able to pay back as much as 13,000 BTC owed to its customers. An excerpt from Jian’s tell-all reads:

“The internal problems and technical difficulties we face are the result of financial difficulties. It is expected that the scale of non-payment is between 7,000–13,000 BTC.”

According to Jian, FCoin’s demise was neither due to a hack or an attempted exit scam. Instead, the former Huobi CTO blamed a series of data and decision errors — specifically concerning proper auditing of the payouts of the platform’s transaction mining model.

The FCoin founder’s statement revealed that several months of the platform’s operations went by before the exchange began implementing any significant checks and balances in its back-end. This operational failure eventually led to catastrophic consequences for the crypto exchange.

A little bit of history

In May 2018, FCoin entered the crypto exchange scene with a novel business model called “trans-fee mining.” This new development took the concept of exchange tokens to another level by reimbursing users with a percentage of the transaction fees received by the platform.

In FCoin’s case, this reimbursement was 100% of the trading fee for each transaction. Thus, for every crypto trade on its platform, FCoin would pay back the user the full amount of the transaction in its native FCoin Token (FT).

Data from the report at the time showed that platforms using the same model as FCoin had been accounting for 12% of the total crypto spot trading market. Traders looking to enjoy what was essentially cost-free transactions were rushing to FCoin and the likes to trade their tokens. Beyond reimbursing users with 100% of their trading fees in FT, FCoin added another layer to its trans-fee mining model by paying its users 80% of its daily revenue.

This meant users were incentivized to trade on platforms that make use of the trans-free mining model, which ultimately led to an explosion of activity. According to CryptoCompare’s December 2018 review of cryptocurrency exchanges, platforms running the trans-fee mining model were beginning to pull-in significant trading volumes.

By 2019, FCoin adjusted its trans-fee mining model, canceling the 100% FT reimbursement, deciding instead to payback transaction fees with the cryptocurrency in which the trader executed the trade. The Chinese crypto exchange also reduced its daily revenue payback to 20%, with the remaining 80% held for one year and still allowing FT holders to earn interest during the holding period.

These adjustments, made at the end of April 2019, were supposed to help the platform move toward a more sustainable operating model. However, as the narrative below will show, the move came too late to salvage what was already a crypto exchange in dire straits.

In theory, trans-fee mining ought to incentivize users to trade frequently, thereby increasing the exchange’s transaction volume. In reality, the model encouraged dishonest activities — an influx of bots, spoofing, wash trading, etc. To earn more money per trade, rogue actors would collude to create fake transaction volumes, propping up the trading activities on these platforms.

In 2019, several reports emerged showing that the majority of volume data provided by crypto trading metrics providers such as CoinMarketCap was from wash trading. Most of the platforms singled out in a Bitwise report were running some form of a trans-fee mining protocol.

It didn’t take long after the emergence of FCoin and trans-fee mining for some crypto pundits and other stakeholders to issue multiple warnings about the model. Back in 2018, Binance CEO Changpeng Zhao called trans-fee mining a reverse initial coin offering. At the time, Zhao remarked:

While FCoin was pulling in large transaction volumes, the back-end architecture that ought to prevent any abuse of the system was not yet in place. With the increasing transaction volume came a spike in the price of FT.

Buoyed on by the upward trajectory of FT’s price action, platform users were increasing their transactions on the platform, earning valuable FCoin tokens that were likely sold for other cryptocurrencies like Bitcoin. Meanwhile, poor back-end controls on the exchange meant that some users were receiving fee reimbursements in excess of the stipulated amounts prescribed by the model. Then came the crash of FT, with the price falling by about 95%. 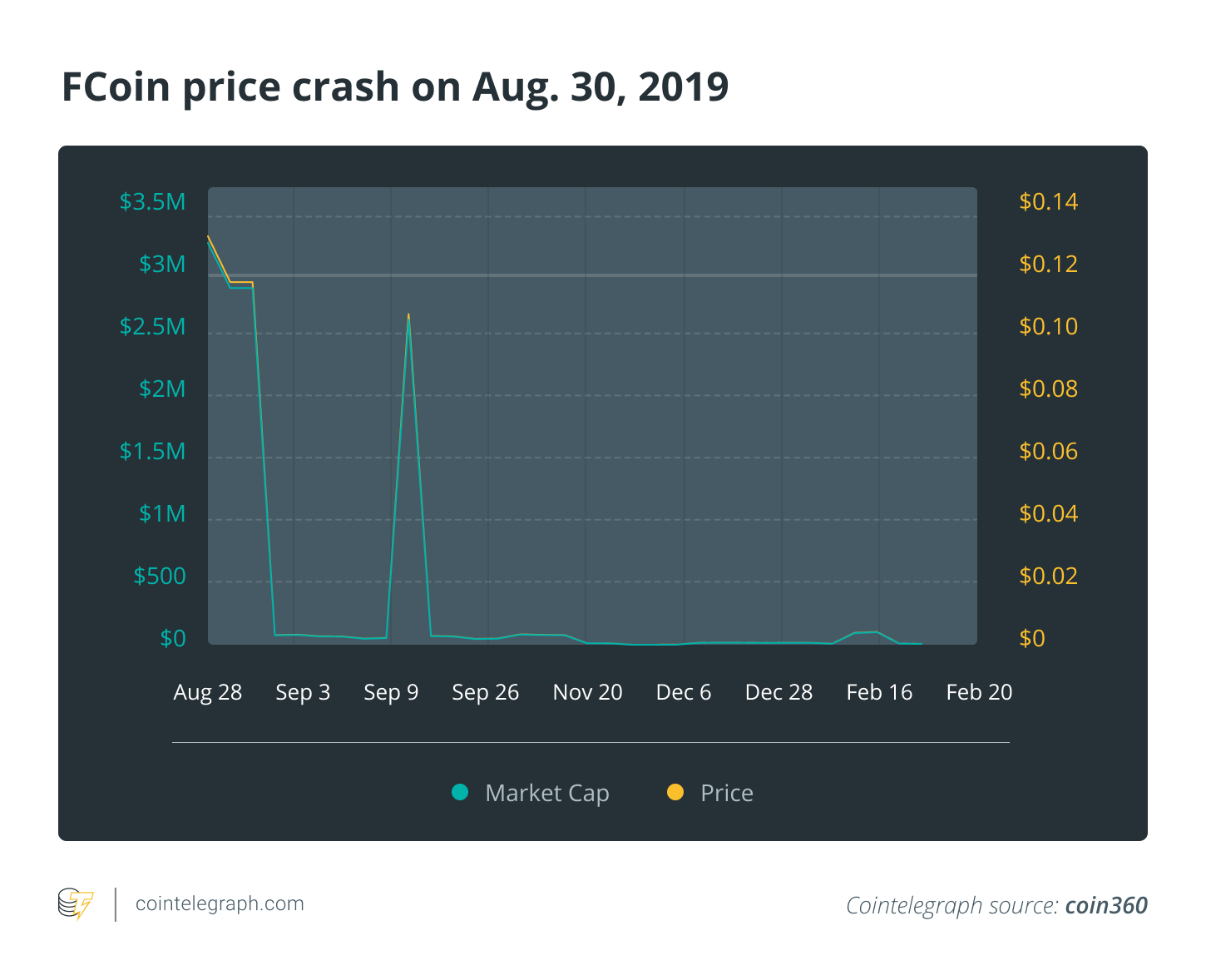 According to Jian, this decline and the discovery of irregular FT payments forced the team to use the exchange’s resources to buy a significant portion of the tokens back in a bid to create scarcity and engineer a return to upward price action. However, the FT buybacks ultimately failed to rescue FCoin. Instead, there seems to have been a steady outflow of funds from the platform’s Bitcoin wallets right up until the announcement of the exchange’s shutdown.

The flow of funds from FCoin Bitcoin wallets also provides further insight into how the trans-fee mining bubble caused the demise of the crypto exchange. Crypto forensic startup PeckShield published a report detailing cryptocurrency transfers from the platform’s wallets. 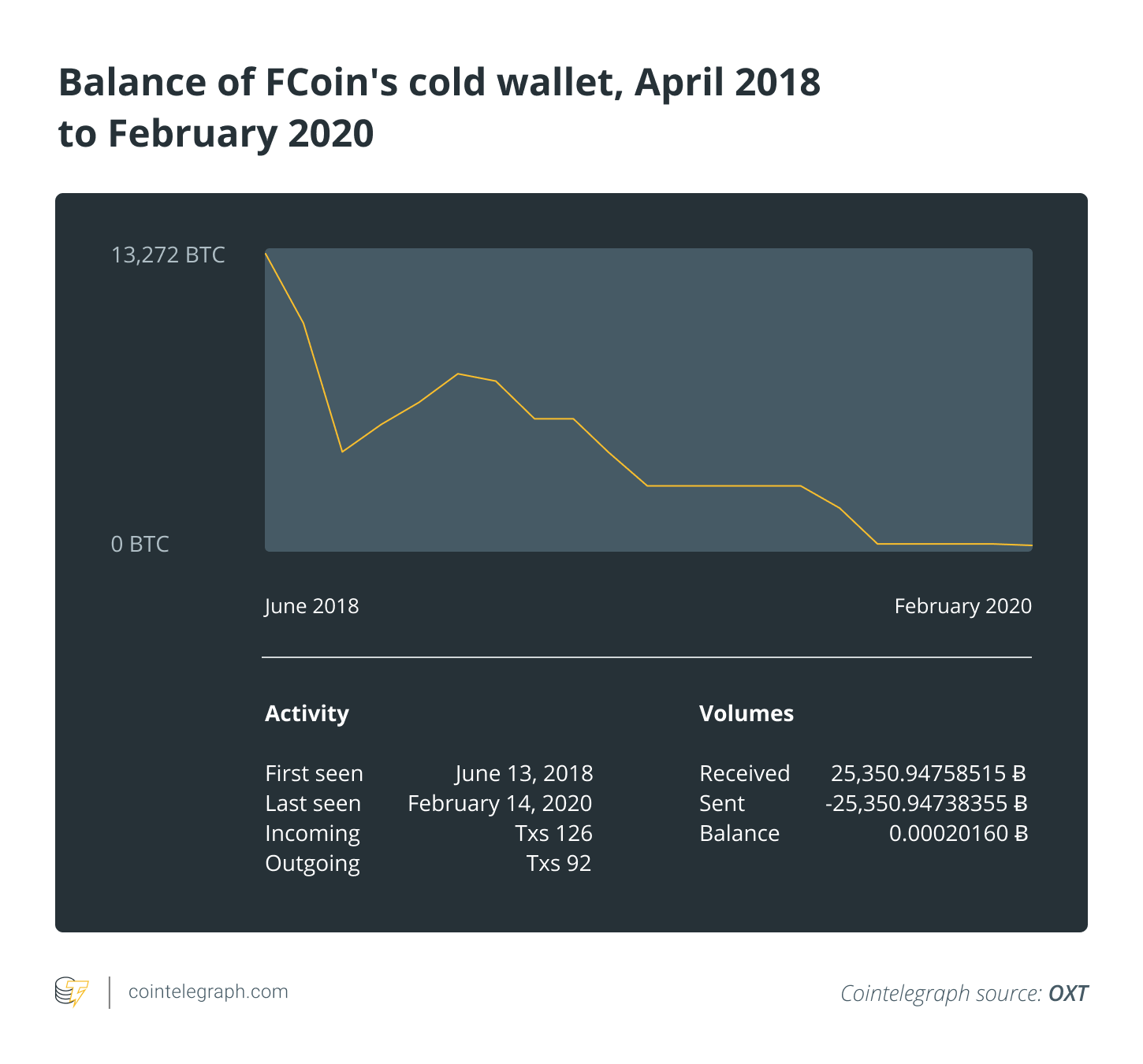 According to the report, FCoin’s cold wallet held 13,272 BTC in mid-July 2018. This figure is the largest Bitcoin cache held by the exchange, and it signaled the prosperous early months of the platform’s operations.

However, over the following six weeks, FCoin’s holdings dropped 10,000 BTC, as just 3,505 BTC was left in the cold wallet by August 2019. This period — from mid-July 2019 to the end of August 2019 — lines up perfectly with the first discovery of irregular reimbursements and other data errors alluded to by Jian in his statement earlier this week. An excerpt from PeckShield’s report translated from Chinese reads:

"We speculate that FCoin's cash flow problem may already have emerged in July 2018. Pandora's box may have been opened at that time when it was in the limelight.”

From these two major streams, smaller BTC amounts were funneled to major crypto exchanges such as Huobi, Coinbase, Bitstamp and OKEx, to mention a few. In total, PeckShield estimates that more than 19,100 BTC was transferred out of the FCoin cold wallet. Another translated excerpt from the report reads:

“We have statistically summarized all FCoin-related address balances and found that there are about 477 BTC remaining.”

With events still unfolding, unanswered questions persist about the nature of FCoin’s demise. For one, why was there an increasing amount of net BTC outflows from the platform’s cold wallet while the price of FT was tumbling?

These outflows do not appear to be user withdrawals, given their non-random nature. Data from on-chain analysis shows that the transaction amounts were always nice, round digits such as 100 BTC or 150 BTC. Dovey Wan, a founding partner at blockchain investment firm Primitive Ventures, argued that the orderly distribution of the net outflows is proof that those transactions were not user withdrawals.

In a separate analysis by white hat crypto transaction analyst ErgoBTC, there is evidence that shows every outbound transaction from FCoin’s cold wallet is followed by a 100 BTC or 150 BTC deposit on an exchange such as Huobi or OKEx.

Another puzzling question from the FCoin debacle shows up in the absence of net outflows between April 2019 and August 2019. Why would a crypto exchange’s cold wallet, which had seen drastic changes in its balance over a period of almost one year, suddenly come to a standstill for four months?

Exit scam, ineptitude or both?

As for the question of whether FCoin’s demise was an exit scam or the product of ineptitude on the part of the platform’s hierarchy, Josh Lawler, a partner at Zuber Lawler and Del Duca LLP, told Cointelegraph:

“The story of FCoin, intentional or otherwise, is that of a Ponzi scheme. The facts and circumstances would be violations of any number of regulatory laws designed to prevent exposure of the investing public to fraud and incompetence. At best, FCoin’s story is a combination of the two. In the digital asset space, it is a cautionary tale as to what happens when undercapitalized and over-exuberant entrepreneurs try to become instant unicorns.”

In his statement, Jian promised to pay back affected users, revealing that he was personally overseeing email withdrawal requests from users of the platform. According to Jian, this process could take between one and three months, with the FCoin founder stating that profits from his next venture will also be used to compensate the victims of the crypto exchange’s insolvency.

FCoin published a statement on Feb. 20 that stated it was considering reopening the exchange. According to the letter: “At present, the social committee and Zhang Jian are discussing the restart plan, and the follow-up will be gradually disclosed to the community according to the process.”

Justin Sun, the CEO of Tron (TRX), has also pledged to help affected FCoin users, promising 1,000 BitTorrent tokens (BTT) to each FCoin customer who moves to the Poloniex exchange. Back in November 2019, Sun was reportedly part of a team of investors that acquired Poloniex from Goldman Sachs-backed fintech firm Circle.