Apparently BCH and BSV both had halving events this week — not that anyone c'Ayred. And Bitcoin CEO Moon Lam Bo failed to bail out the failing monetary policies of Central Banks.

The halving that matters is a little over a month away. Sometime in mid-May, Bitcoin block rewards paid to miners for discovering new blocks will drop from 12.5 BTC to 6.25 BTC.

They both enjoyed momentary bumps in price, by about 11 and 19% respectively. Those gains were fairly immediately wiped out, however, with their reward halvings failing to have a lasting price impact.

The slump in network activity was predicted by Coin Metrics:

“When Bitcoin Cash and Bitcoin SV halve their block rewards, this should force miners to direct even more hash power to Bitcoin as it will still have a 12.5 native unit block reward (instead of 6.25) for about a month longer.”

And Where Was The Fanfare?

Debates around the forthcoming Bitcoin halving and its impact on miners, price, hash rate, and network stability have raged for well over a year. Speculation among analysts, journalists, pundits, and investor groups as to what the impact will be has continued to drive column inches. Whales have started to accumulate in the run-up to the event. 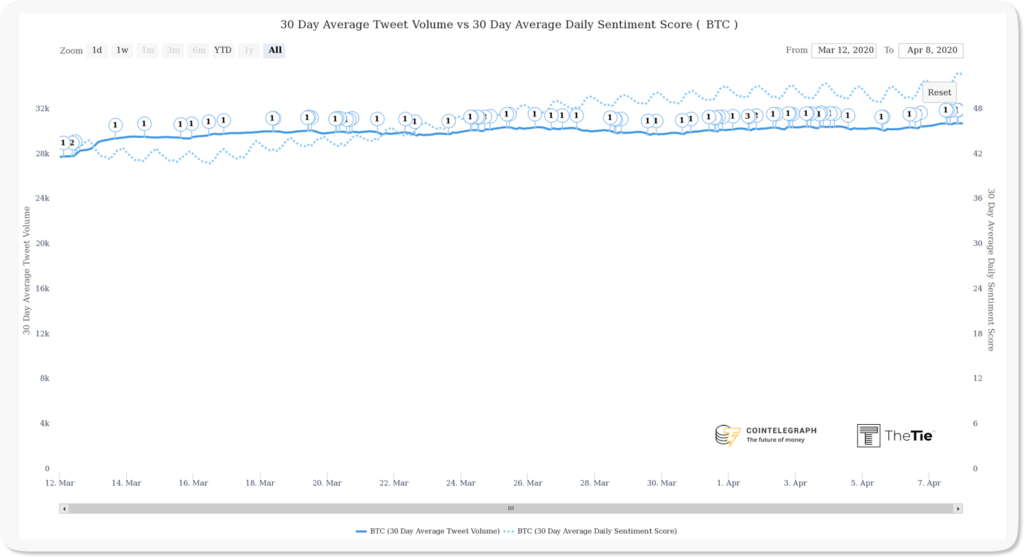 The numbers indicate stories about the halving in major crypto outlets and mainstream media sources. Meanwhile, the Bitcoin Cash halving hardly made waves at all, as seen below. 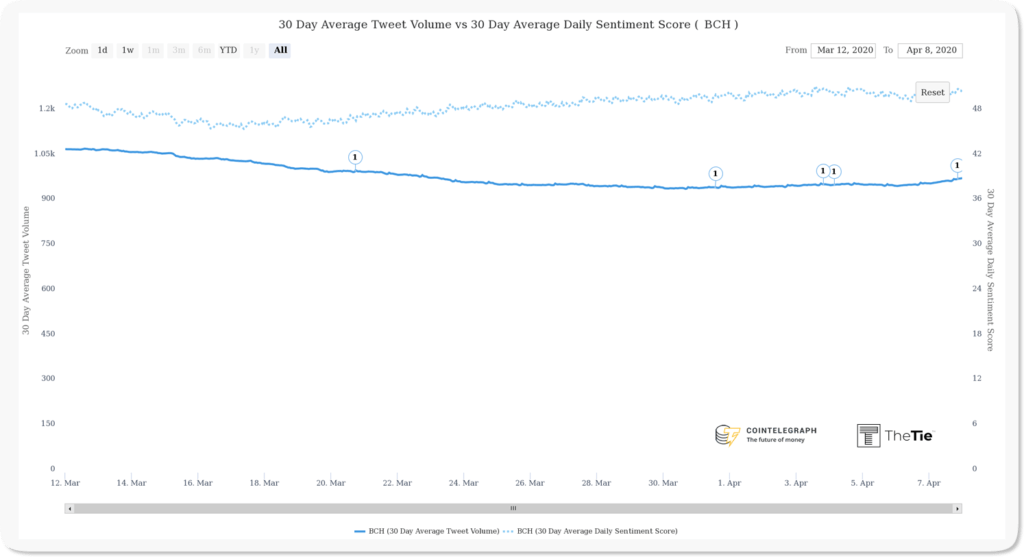 And as for Bitcoin SV, well, a picture sometimes tells a thousand words. Its halving headlined in two media articles and Twitter interest plunged: 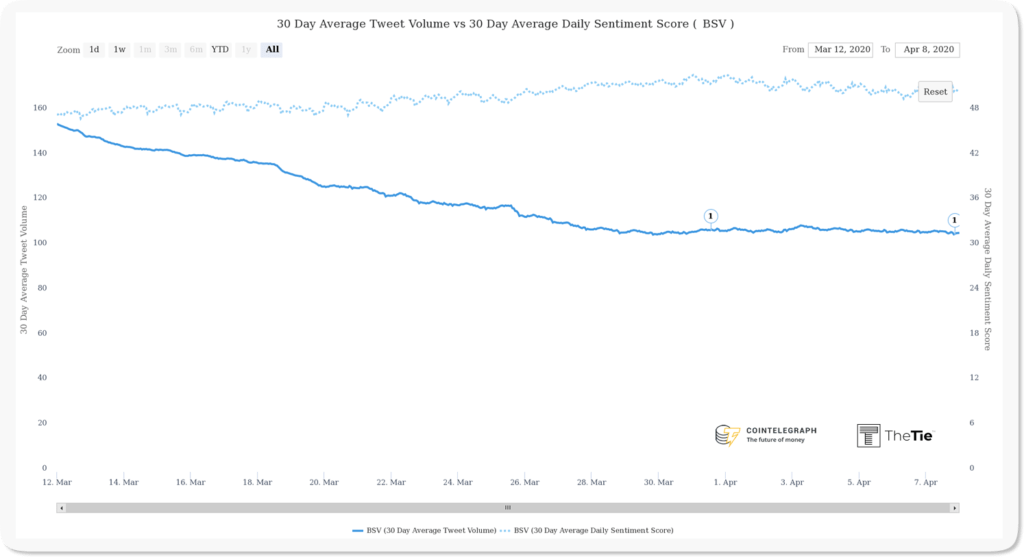 Now maybe this indicates that the real reason for the lack of interest is that the media refuses to cover Bitcoin Cash and Bitcoin SV, out of some sense of bias or spite. But that’s not the case — editors and journalists cover the events that matter, and they read charts like the one below.

Because for all the similarity you may see in the three charts above, this is the one that really matters. It shows the absolute volume of tweets across all three cryptocurrencies, and illustrates why the media chooses to focus on Bitcoin, rather than its struggling kids. 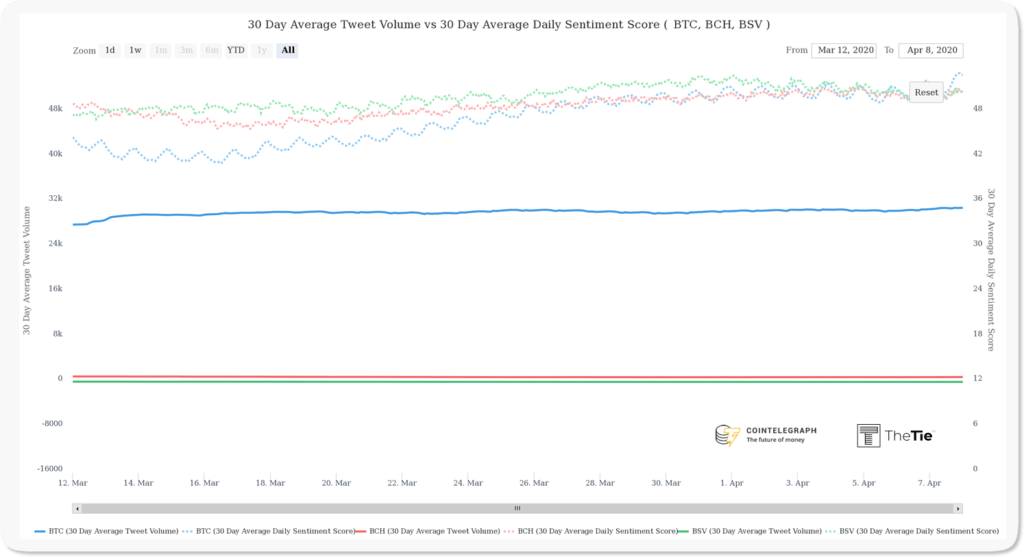 If Twitter is any indication, the lack of interest in the Bitcoin forks as they approached their halving is indicative of only one thing.

The lack of interest in the Bitcoin forks as they approached their halving.

Which is why Bitcoin Cash and Bitcoin SV receive this week’s badge of dishonor: the Epic Fail.

Moon Lam Bo, who heads up the corporation that owns Bitcoin, has strongly resisted calls to increase the cryptocurrency’s maximum supply of 21 million. Pressure has been mounting for Lam Bo to align the network with other major global currencies.

As the U.S. Federal Reserve dialed up money supply to infinity and central banks across Europe promised unprecedented stimulus measures to combat the economic slowdown brought on by the coronavirus pandemic, Lam Bo declared that Bitcoin would not be changing its hard cap policy.

With the Fed creating $6.2 trillion out of thin air, Bitcoin naysayers urged the cryptocurrency’s all-powerful monetary policy committee — headed by the CEO — to follow suit. In an open letter penned by starving banking industry executives and a newly formed group called the AFUC (Association of Failed and Underperforming Corporations) legacy business leaders criticized Moon for falling asleep at the wheel.

“Thin air money, or TAM, is the most promising innovation in the modern financial system,” the letter began, “And Bitcoin’s CEO is recalcitrantly failing to deploy it.” The rest of the AFUC statement was unintelligible, as it was drowned out by the sound of hovering helicopters.

In a statement released Friday afternoon, Moon reiterated his strong stance against any changes to the hard cap:

“In times like these, to deploy TAM measures would be irresponsible and lead only to inflation and asset bubbles. Diluting the value of Bitcoin by increasing the hard cap would cause irreparable harm and do little more than succumb to the blatant misuse of monetary policy. That sounds really dumb. Like, really moronic. Who would do that?”

Moon’s tenure as Bitcoin CEO is set to expire in 2140, at which time the circulating supply of dollars is expected to be twenty seven million billion trillion gazillion and three, all of it owned by Jamie Dimon’s cryogenically-frozen smirk.

In the post-2008 era of endless supplies of free money, largely doled out to corporations at taxpayers’ expense, Bitcoin Nailed It yet again.

Astrology charts and technical analysis: Maren Altman is a star

"I always knew I would be successful. Funnily enough my own astrology charts are entirely focused on finance."

QuickSwap founder: L2s are the path to mass adoption

"If I’m a normal user and I want to do a small trade, I cannot do it on Ethereum."

“Dubai is very crypto-friendly and blockchain-oriented — you can easily set up a crypto-related company in the DMCC Free Zone with zero taxes.”