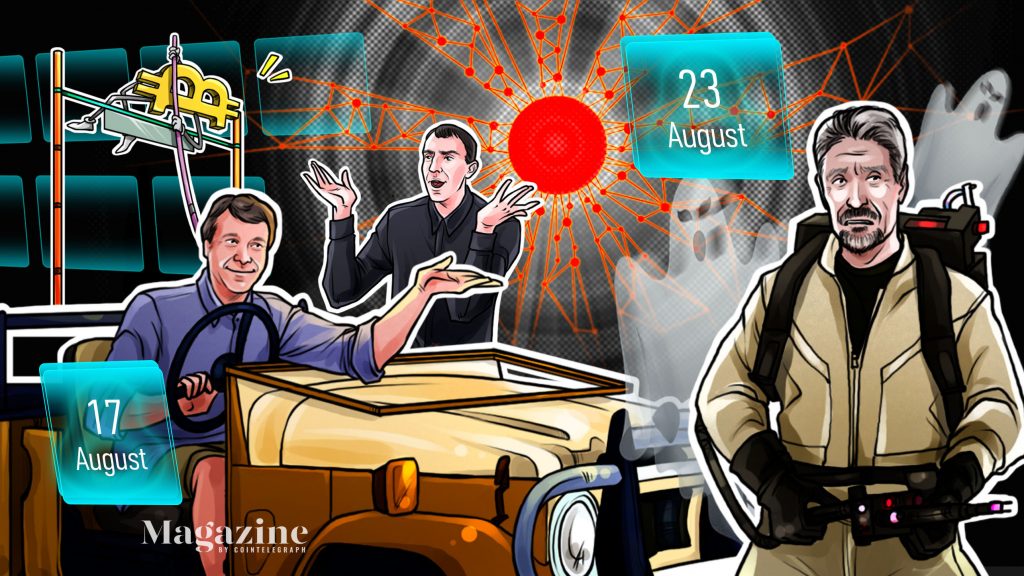 Another week, another unsuccessful attempt at meaningfully cracking $12,000. Bitcoin suffered an 8.6% drop to as low as $11,370 after a stubborn rejection at $12,400. Now, technical analysts are cautiously anticipating a consolidation phase in the short-term.

Cointelegraph analyst Michaël van de Poppe says dropping below $11,500 again could lead to a bearish divergence for the world’s biggest cryptocurrency. Here’s the problem: Clouds are beginning to darken over the stock market, and this could affect BTC

The “Buffett Indicator” is hinting that the U.S. stock market is currently at dot-com levels — potentially indicating that equities are highly overvalued. A crash could trigger a major reaction on the BTC markets… but the jury’s out on whether it’ll be good or bad.

Some argue that the correlation between Bitcoin and the S&P 500 has been diminishing recently — potentially boosting the bull case for BTC if stocks decline. Indeed, a new report by Grayscale Investments recently said that Bitcoin’s current market structure “parallels that of early 2016, before it began its historic bull run.”

There was further bad news for the already delayed Ethereum 2.0 upgrade this week. Medalla, the final multi-client testnet before the long-awaited Phase 0 launch, came to a shuddering halt when a bug took most validators offline.

Medalla is now back up and running again, if not entirely stable. But some, such as the Bitcoin SV blog CoinGeek, have described the disruption as a major disaster that proves Ethereum 2.0 is not ready to launch, with “significant delays likely.”

Not everyone agrees with this dire outlook. Raul Jordan, the editor of Prysmatic Labs, insists that the outage “does not inherently affect” the upgrade’s launch date. Even though he described the bug as “carnage,” he insisted that this is exactly what testnets are for: ironing out problems in an environment where real money isn’t at stake.

With the Ethereum network struggling to cope with demand, a problem exacerbated by the DeFi boom, pushing back the launch date any further would be a major issue. After all, Phase 0 had been meant to launch back in January.

As Eli Afram wrote on Twitter: “ETH 2.0 is going to need all the testing it can get. Maybe a couple of Hail Mary’s too.”

Shock: Ethereum miners against proposal to reduce block rewards by 75%

Now here’s a bit of news that’ll blow your socks off. Miners have reacted furiously to an Ethereum Improvement Proposal that would slash block rewards by 75%.

The change is designed to bring Ether’s inflation rate more in line with Bitcoin’s and to preserve ETH’s purchasing power. But miners are warning that this would have a devastating impact on security and could make a 51% attack more likely.

Some miners are disgruntled about how they’re being treated in the run-up to Ethereum 2.0. This upgrade will make the blockchain proof-of-stake, eventually rendering miners obsolete.

One of them said: “It feels really bad to be treated as a necessary evil to be paid out the minimum possible to incentivize us to keep our lights on just long enough to make the transition to 2.0 work.”

Former Reserve Bank of India head says cryptos have a future, but fears a monopoly

One of India’s top economists has said that private cryptocurrencies like Bitcoin and Facebook’s Libra can have a future — even when central banks launch their own digital assets.

Raghuram Rajan formerly served as the governor of the Reserve Bank of India and as the International Monetary Fund’s chief economist. He warned that it would be “problematic” if a single private cryptocurrency or CBDC ends up gaining a monopoly, as this would mean they have a “tremendous amount of power.”

Speaking on a CNBC podcast, he believed that comparing Bitcoin with Libra and Libra with CBDCs such as the digital yuan is ultimately unhelpful because each will play a different role. Whereas he predicted BTC will continue to serve as a store of value or a speculative asset, he said Facebook’s asset will be used for day-to-day transactions.

In remarks that are rather refreshing from a former central banker — let alone one from crypto-cautious India — Rajan added: “Do you trust the central bank as much with details on every transaction you make? Should the government know? The beauty of the cash in our hands is that it’s anonymous. Even if you’re not doing something illegal you don’t want the government seeing everything you do.” 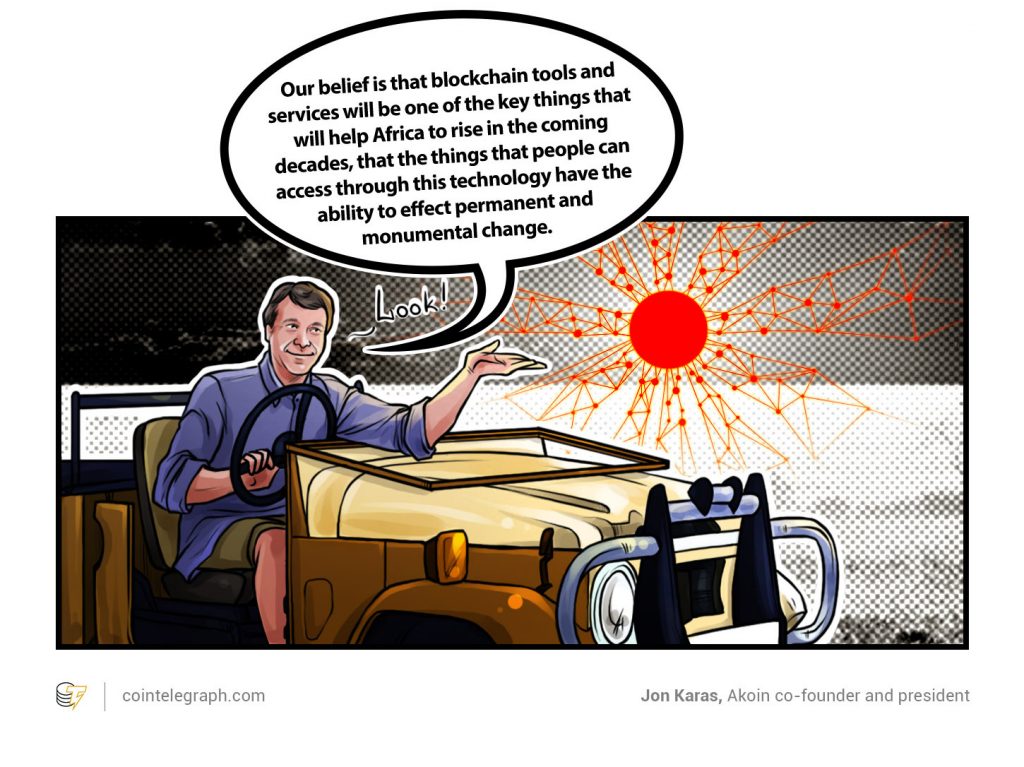 Uber’s former chief security officer has been accused of trying to cover up an extensive hack by funneling a hush-money payment of $100,000 in Bitcoin through a bug bounty program.

The U.S. Department of Justice has charged Joseph Sullivan with obstruction of justice and misprision of felony in connection with the 2016 attack. During the incident, hackers obtained the license numbers of 600,000 Uber drivers — and private information belonging to 57 million users.

According to prosecutors, Sullivan took “deliberate steps to conceal, deflect, and mislead” the Federal Trade Commission regarding the breach and the subsequent payment.

U.S. Attorney David Anderson said: “We will not tolerate illegal hush-money payments. Silicon Valley is not the Wild West.”

In a statement, a spokesperson representing Sullivan claimed “there is no merit” to the allegations — adding that, without his actions, “it’s likely that the individuals responsible for this incident never would have been identified at all.” Two of the hackers pleaded guilty to charges of computer fraud conspiracy in October and are now awaiting sentencing. 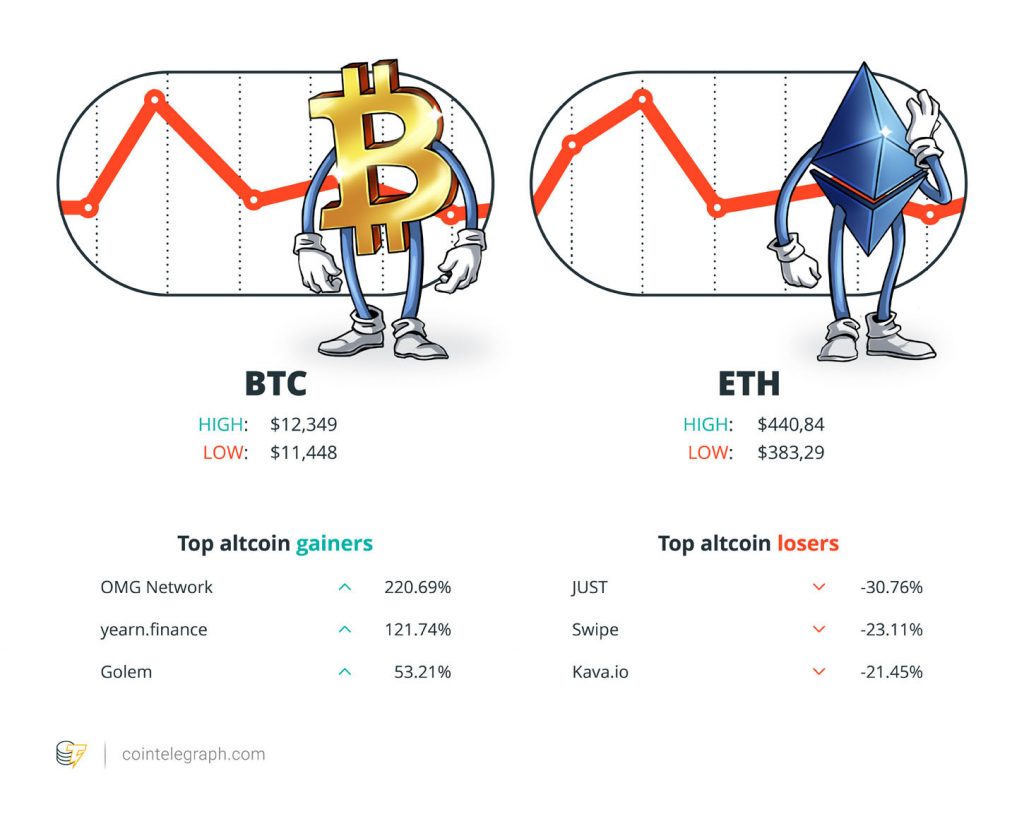 Fed & Treasury to take over banking system? Fed and Treasury ‘helicopter fake money’ direct to people to avoid mass rioting? Not a time to ‘Think about it.’ How much gold, silver, Bitcoin do you have?

It appears that users in many regions use stablecoins to access U.S. dollars for cross-border payroll, remittance, and capital flight from local currencies.

ETH 2.0 is going to need all the testing it can get. Maybe a couple of Hail Mary’s too.

It would have been really terrifying if the Medalla public testnet ran uninterrupted, with perfect performance right before mainnet, and then this bug occurred with real money at stake once ETH 2.0 launched.

Bitcoin continues to command global investor attention, there is scant supply to meet growing demand, and the infrastructure is now in place to satisfy that demand.

Every time Bitcoin breaks a prior all-time high, especially when it takes years to break that all-time high, it tends to usually more than double. So I think $45,000 to $50,000 is a reasonable target.

Well-known Bitcoin derivatives trader Tone Vays believes Bitcoin will stay above $10,000 for the rest of 2020.

Although he was previously skeptical that the cryptocurrency had any chance of breaking $20,000 in 2021, he now thinks it’s possible for BTC to overtake its all-time high.

Vays said that, should Bitcoin surpass this record, history shows that the cryptocurrency has a good chance of doubling in value. Based on historical price cycles, he predicted that $45,000–$50,000 would be a reasonable target. 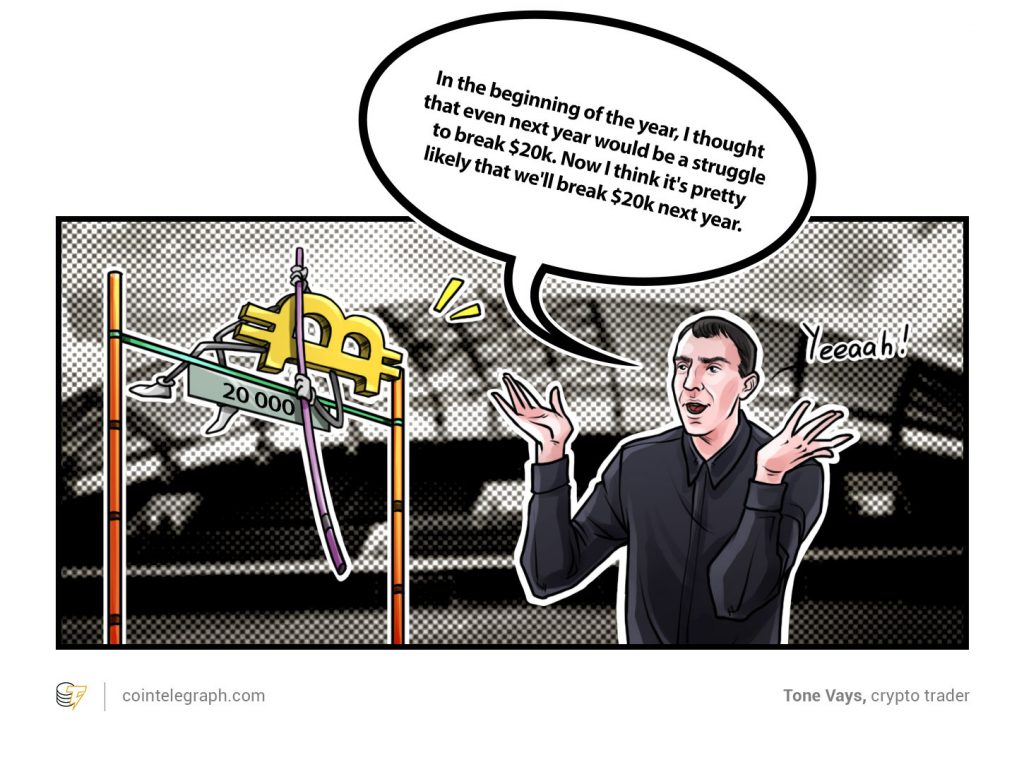 Various price models predict the price of Bitcoin to reach anywhere between $30,000 to $250,000 in the long-term. Historically, Bitcoin has seen a major breakout past its previous record high, reach a new peak, then correct.

A rapid upsurge to unsustainable price levels could leave BTC vulnerable to sharp drops. Vays added: “Do we think we go as high as $100,000? I’m not willing to make that statement. For me, I would be happy if the next top was around $45,000, and that can happen quickly.”

The Internal Revenue Service released drafts of its income tax forms for 2020 this week. Every American filling out this paperwork will be asked whether or not they used crypto.

Early into its very first page, the latest 1040 form asks: “At any time during 2020, did you receive, sell, send, exchange, or otherwise acquire any financial interest in any virtual currency?”

Chandan Lodha, the founder of the crypto tax software firm CoinTracker, told Cointelegraph that this “pretty clearly shows that the IRS is taking cryptocurrency taxes even more seriously.”

John McAfee has left his own privacy asset project

Tech pioneer and crypto advocate John McAfee sensationally announced this week that he was departing his own privacy asset project, Ghost.

In a tweet on Aug. 19, he wrote: “Management is incapable of making a success of the project. It will, without a doubt fail.”

McAfee apologized for leading anyone astray, but added: “I tried to explain the fundamental principles of management, but they fell on deaf ears.”

The 74-year-old has bashed Bitcoin for its lack of privacy, but Ghost has had some problems of its own. It has been claimed that the project plagiarized content from the white paper of PIVX, another anonymity-focused crypto asset.

Following his abrupt departure, a Ghost representative wrote on Telegram: “John McAfee is a tech pioneer, a really cool guy, and a loose cannon […] John can help market GHOST to his network or doesn’t have to, but that does not affect the GHOST blockchain whatsoever.” 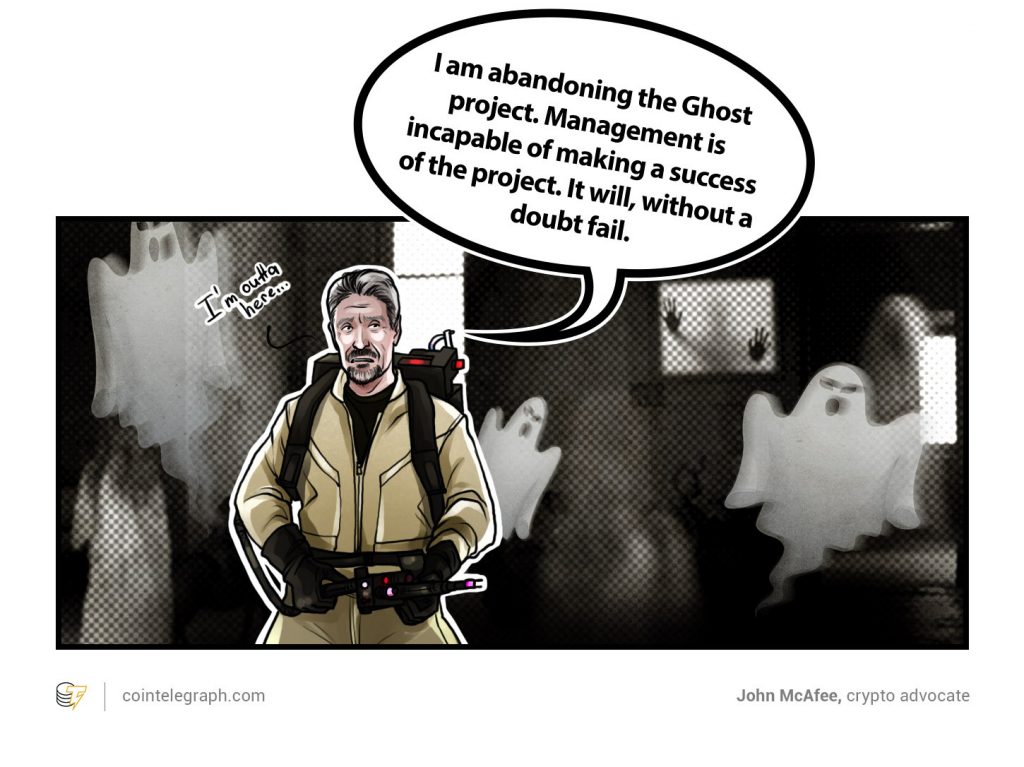 Earlier this week, the upcoming DeFi lending protocol Teller Finance tweeted that a fake token in its name, as well as a Uniswap pool, had been created.

The project added: “Teller Labs has not made any official announcements on any potential, planned, or upcoming token launches.”

The highly anticipated NEAR Protocol token sale also attracted impersonation scams in the lead-up to its commencement last week — with Cointelegraph identifying two tokens impersonating NEAR on Uniswap in recent weeks.

Unlike centralized platforms, Uniswap does not maintain any rules or criteria for listing, meaning that anybody can list an ERC-20 token on the exchange.

The high-profile Twitter hack — which saw malicious actors take over 130 verified accounts including Bill Gates and Elon Musk — managed to be both technically brilliant and incomprehensibly stupid at the same time. Writing for Cointelegraph Magazine, Andrew Fenton takes a look at some of the biggest scams over the years.

Youssef speaks to Darren Kleine about his journey in the world of business — starting all the way back as a newspaper delivery boy in the 80s.

Recent advertising campaigns by cryptocurrency fund management firms are well-timed as investors look for safe havens from inflation. Gareth Jenkinson has the story.