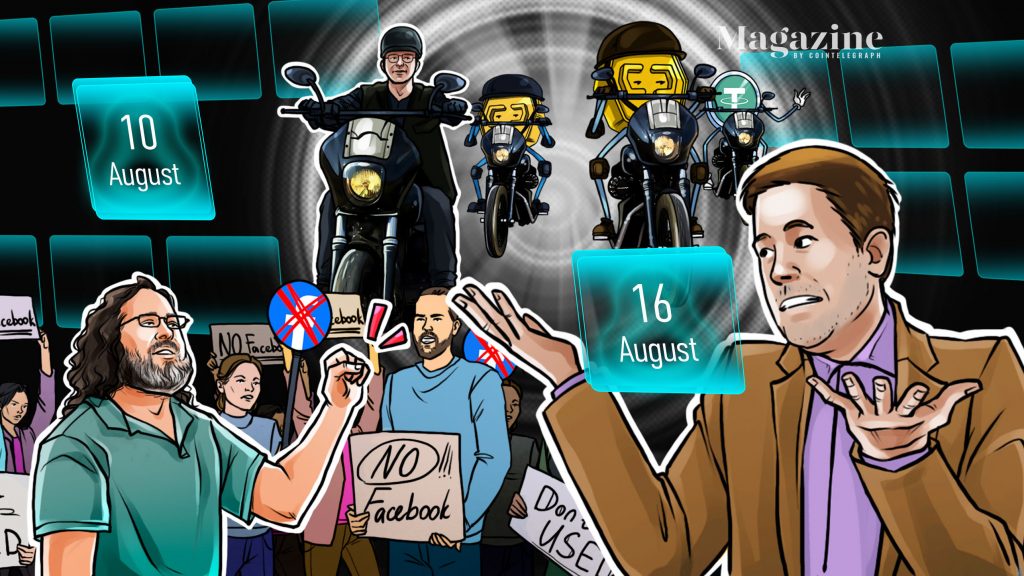 Coming every Sunday, Hodler’s Digest will help you track every single important news story that happened this week.

Bitcoin bulls stampede toward $12,000 as Ether hits a two-year high

Once again, Bitcoin bulls have set their sights on cracking $12,000. It’s a battle fraught with risk, as multiple rejections at this stubborn level of resistance could be seen as a bearish signal. Others disagree and say repeated retests heighten the chances of success.

There are fears that we could be heading for a correction — with the Crypto Fear and Greed Index flashing a score of 82, which means there’s extreme greed in the crypto markets.

Nonetheless, some analysts — such as Cointelegraph contributor filbfilb — believe history could be repeating itself. He highlighted clear similarities between what’s happened in the BTC markets over the past few weeks and its run to all-time highs in 2017.

Meanwhile, Ether’s extraordinary performance is showing no signs of subsiding. CoinMarketCap data shows ETH has risen 7.63% over the past week — streets ahead of BTC, which has gained a paltry 1.16%

This week, ETH hit a two-year high after rallying to $445, with open interest on ETH futures remaining steady after hitting a record $1.5 billion. One well-known trader, “Satoshi Flipper,” says there’s no hard resistance for ETH until $780.

One of the biggest hurdles that has long faced the crypto sector has been achieving widespread public awareness. This week, there were two big milestones.

Financiers in pin-striped suits tucking into their breakfast may have choked on their coffee after opening the Financial Times to see a full-page ad declaring: “Now is the time to invest in Bitcoin. In uncertain times, Bitcoin is a hedge independent of the hegemony.”

This is a big deal. The FT is based in the United Kingdom and had more than one million subscribers in 2019 — roughly 18% of whom are millionaires.

A few days earlier, crypto fund manager Grayscale Investments released a 30-second TV spot that’s running across business news channels. But unfortunately, the ad hasn’t been as warmly received as the company may have hoped for.

Some were unhappy with how the ad was produced, and others were exasperated at how it didn’t mention Bitcoin by name. One viewer on Crypto Twitter jumped straight to the point, surmising: “The ad is s—.”

Ripple CEO fires back at NYT reporter: “Ripple has no plans to reset our strategy”

Brad Garlinghouse has been on a one-man crusade against the mainstream media this week.

The FT wrote a report that quoted the Ripple CEO as saying: “Two years from now, you’re going to find that Ripple is to payments as Amazon was to books.”

That article added that Ripple was “attempting a reset,” as the startup was still trying to find compelling uses for the blockchain technology underpinning XRP.

Garlinghouse hit back, describing the FT as one of his “fav skeptics.” He wrote: “Ripple has absolutely no plans to ‘reset’ our strategy. Using XRP to solve a real-world, $10T problem, like cross-border payments, is working.”

But with the Spanish banking giant Santander reluctant to adopt XRP as part of its international payments network, Garlinghouse is coming in for some criticism.

Citing statements made by Garlinghouse back in January 2018 that banks are planning to use XRP in the near future, New York Times reporter Nathaniel Popper wrote: “If investors put their money into XRP on the day @BradGarlinghouse talked about the banks planning to use XRP — and held it to today — they would have lost around 90% of their investment.” 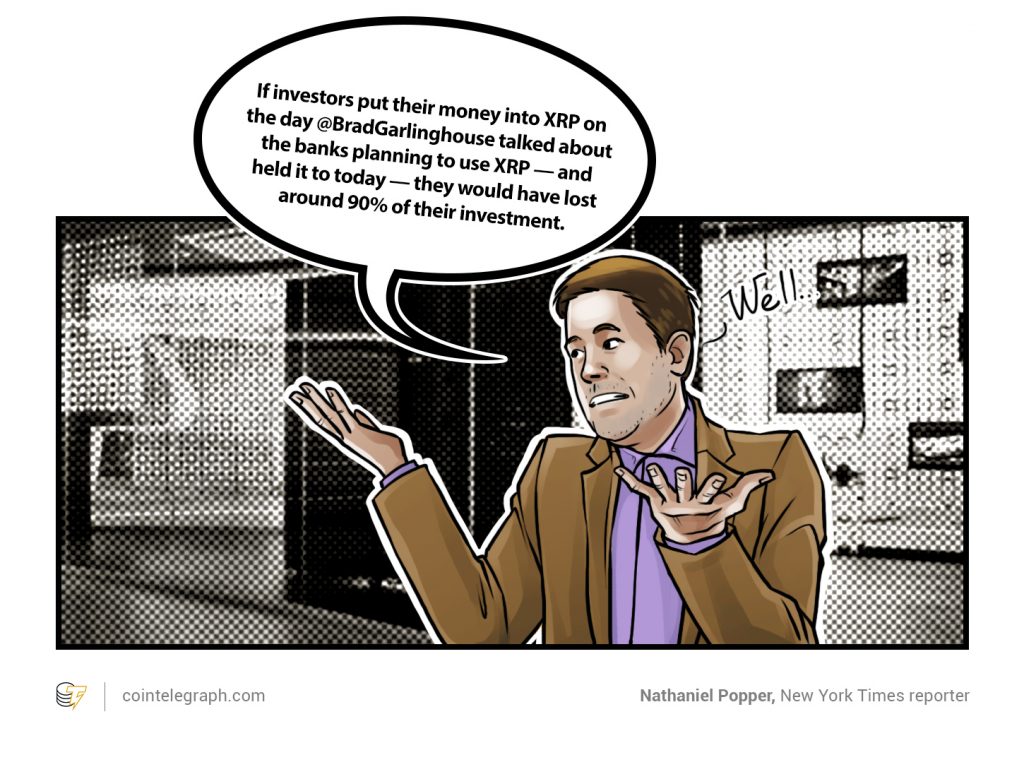 Buckle up, it looks like China’s central bank digital currency may be just around the corner.

Trials of the digital yuan are not being expanded to include Beijing, as well as the provinces of Tianjin and Hebei.

The expanded pilot will also include the Hong Kong Greater Bay area — consisting of nine cities including Guangzhou, Shenzhen, as well as Hong Kong and Macau.

A Chinese Ministry of Commerce representative said today that the trials will cover much of China’s wealthiest regions. Poorer central and western regions that meet unspecified criteria will also join the testing. The People’s Bank of China will lead the pilot.

Official Doctor Who merchandise is coming to the blockchain

A digital trading game for the cult sci-fi series Doctor Who is being developed on the Ethereum blockchain.

The game — called Doctor Who: Worlds Apart — will allow players to collect and trade digital versions of characters in the series. Each trading card will be a nonfungible token that’s secured on the blockchain.

This marks the first time that the BBC has used blockchain technology to market their intellectual property.

It’s expected that the game will be released for PCs in 2021, but the mobile version is yet to be given a launch date. 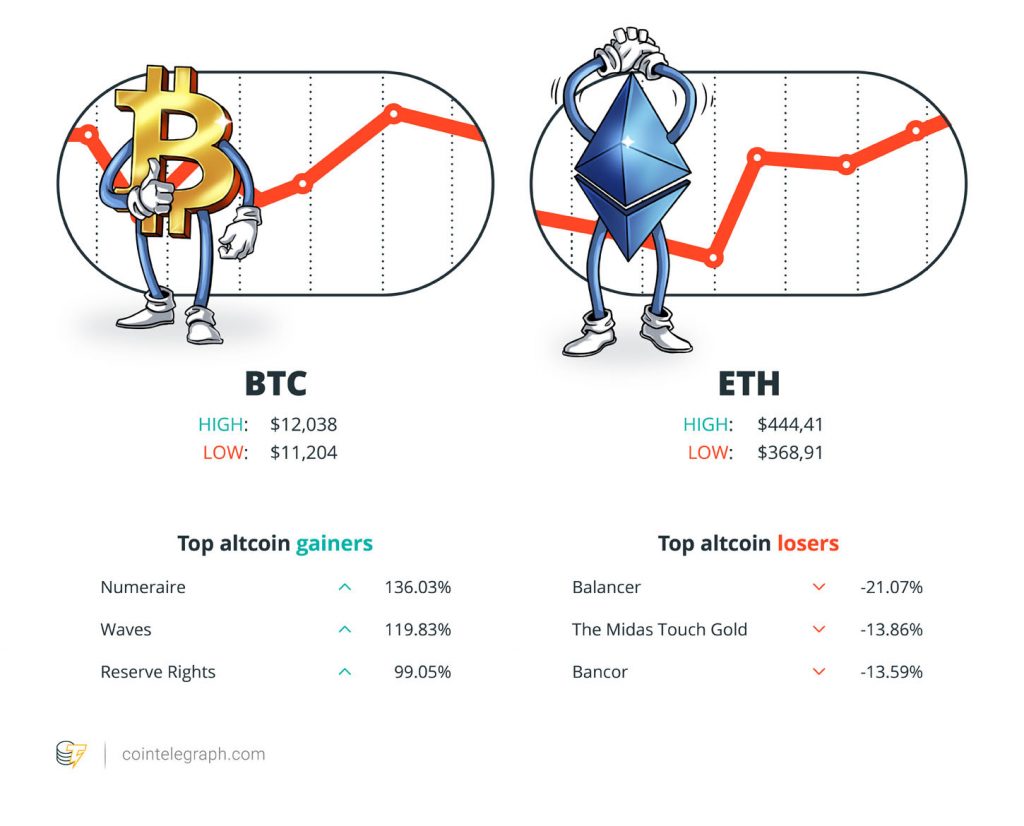 Given the current economic backdrop coupled with the weakening dollar, we should continue to see bullish momentum moving forward for Bitcoin.

To require a transaction fee of $99 is beyond ridiculous. This will be a major roadblock to growth if someone on the team does not address this.

User verification has been on our list of things to do. We’ve been getting ready for this, as it’s become necessary in order to run a scalable, responsible, compliant platform moving forward. This is a building blockchain for us to grow and do business in the future.

Now is the time to invest in Bitcoin. In uncertain times, Bitcoin is a hedge independent of the hegemony.

It would appear that the March 2020 crash saw weak hands pushed out of the market, allowing it to gradually recover and reclaim $10,000 — which put most open positions today in the green.

Google you should be ashamed. Whoever runs GoogleAds is FAILING MISERABLY. On YouTube where scammers get ads through and now on your own platform.

If you don’t have some Bitcoin now, it is time to put at least 3% of your net worth into Bitcoin. This is the lowest risk, highest asymmetric upside investment you will likely see in your lifetime. Or stop the lockdown. But still get Bitcoin.

If it reaches its potential, the value could be immense. At the same time, there is a non-zero chance that it fails entirely, leaving the value of Bitcoin close to zero.

This investment reflects our belief that Bitcoin, as the world’s most widely-adopted cryptocurrency, is a dependable store of value and an attractive investment asset with more long-term appreciation potential than holding cash.

Boom! Kraken predicts imminent Bitcoin price rally of up to 200%

Major United States-based crypto exchange Kraken has released a report predicting that Bitcoin will rally by between 50% and 200% in the coming months.

A new report by the company notes that BTC posted a 21-month low for volatility on July 24 of just 23% — and revealed that Bitcoin’s 12 historic volatility lows have usually been followed by a rally of 140% on average.

August is usually the third-most volatile month for Bitcoin price fluctuations — and Kraken predicts that the upward momentum produced by BTC at the end of July will continue for several months to come. 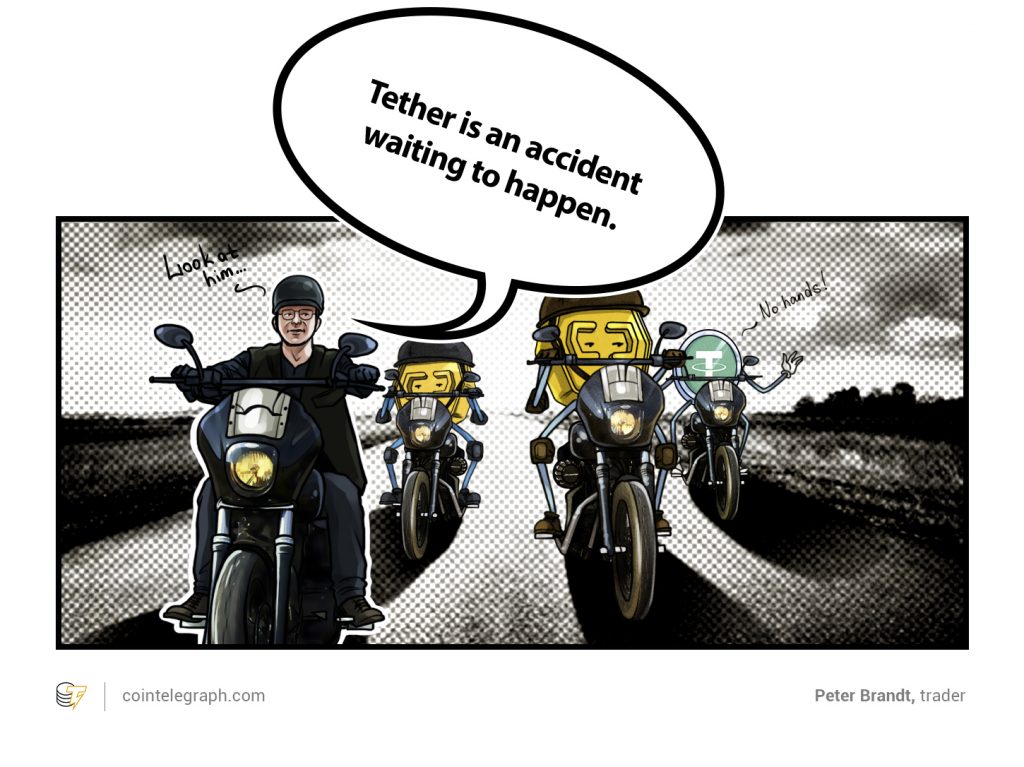 There are growing fears that high fees on the Ethereum blockchain are impacting the growth of decentralized finance.

This week, the network processed an all-time high of $6.87 million in total fees — and at one point, Ethereum fees spiked by almost 100% within 24 hours.

Synthetix CEO and founder Kain Warwick said: “In the last three months, we’ve gone from an environment where DeFi was expensive to use and a little bit slow, to now, [where] for a lot of people it’s prohibitively expensive.”

The rush to stake coins in the doomed YAM protocol saw numerous SNX stakers report transaction fees as high as $99 when seeking to collect weekly participation rewards. Reddit user Willy 3380 posted: “To require a transaction fee of $99 is beyond ridiculous. This will be a major roadblock to growth if someone on the team does not address this.”

Layer two solutions for Ethereum’s congestion problem are becoming increasingly important due to delays in the rollout of Ethereum 2.0.

Think you’ve had a bad day in the office? Spare a thought for a New York attorney who has been ordered to pay $5.2 million after prematurely releasing Bitcoin funds from escrow.

The ruling against Aaron Etra comes after he failed to show up for an April court date to confirm an arbitration session, as well as for the session itself. His absences were instrumental in the judge ruling in favor of Benthos Master Fund, an investment firm that’s based in San Francisco.

U.S. District Judge Alison J. Nathan said: “He has only himself to blame. Respondent failed to appear or present evidence despite receiving notice of the arbitration and despite the fact that he was clearly required to arbitrate any disputes under the Escrow Agreement.”

The judgment may be a hidden blessing for Etra. He could have potentially been liable for $108 million — the current value of the BTC in fiat — if the sale had gone through at the time.

Three men are accused of swindling 226,000 Hong Kong dollars from Bitcoin ATMs in the city.

The trio — aged 26 to 35 — allegedly exploited six machines, manipulating them to cough up the equivalent of $30,000.

Authorities reportedly think the three males in question make up part of a larger criminal operation.

Two crypto exchanges tipped authorities off to the nefarious activity prior to the arrests.

Wilson Tam, the superintendent of Hong Kong’s cybersecurity and technology crime bureau, told the South China Morning Post: “It is the first time we came across fraud linked to Bitcoin ATMs.” 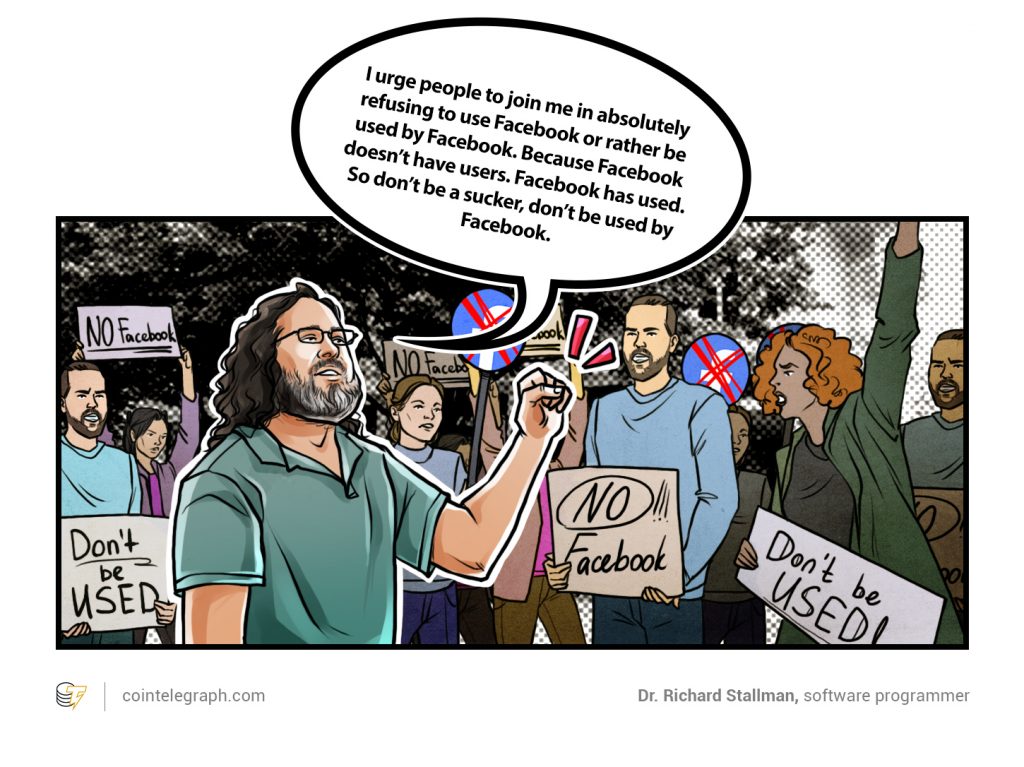 Championing blockchain education in Africa: Women leading the Bitcoin cause

A recent study revealed that women only represent 14.5% of blockchain startup team members — but in Africa, the story has been quite different. Here’s Cointelegraph Magazine’s Steven Msoh.

Blockchain smartphones and crypto-storing watches: Which innovative devices have actually gone from concept to reality? Gareth Jenkinson takes a look.