How to mine Bitcoin Cash: A beginners guide to mining BCH 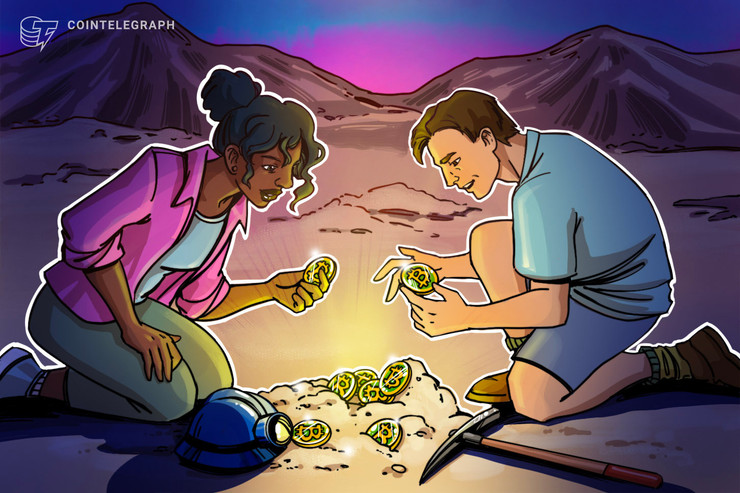 Bitcoin Cash (BCH) mining requires three things: a dedicated mining setup (rig) or a mining pool that does all the heavy lifting, a wallet for collecting the reward and a robust infrastructure to host your mining operations. Bitcoin Cash runs on the proof-of-work (PoW) consensus mechanism to mine the historically limited amount of 21 million coins.

Mining is foundational to the existence of the cryptocurrency economy. Although mining is closely associated with earning rewards in the form of crypto payment, the operation is responsible for maintaining the credibility of the financial system.

There are many ways in which you can earn crypto, and just like other top performing assets like gold, you can do this by mining it yourself. Before you pick up the shovel, let’s get into some of the factors one must consider before mining Bitcoin Cash.

Miners are an integral part of the crypto ecosystem and are responsible for confirming every single transaction that goes through the blockchain. When you send BCH to another wallet address, the underlying technology requires miners to solve complex mathematical problems and confirm the legitimacy of each transaction request. In return, you get to collect a miner’s fees in BCH.

To solve these mathematical problems, you will need help from powerful computers that are famously marketed as mining rigs. The Bitcoin Cash ecosystem rewards 6.25 BCH for successfully mining a single block of transactions. You will also get to keep the network transaction fees paid by the sender.

However, other crypto ecosystems such as the original Bitcoin (BTC) offer higher rewards, which is directly related to the mining difficulty of the cryptocurrency. The difficulty also determines the time needed for successfully mining a single BCH block and its respective miners' revenue.

Here’s the catch though: You get the reward only if you are the first one to solve the problem. This explains why miners eventually set up massive warehouses to run their operations: the more computers and graphics cards in your repertoire, the higher your chances of winning the computational race among other miners.

Cryptocurrency mining is a business, after all. You need to make sure that the expenses to run your mining operations are less than the rewards you are hoping to earn along the way.

Right off the bat, you should start making some calculations around the mining operations such as the equipment, space, electricity and manpower. Planning these ahead gives a clearer picture of what you might be able to realistically accomplish. Striking the right balance between your mining rig and mining operations will ensure that you’re running the most cost-effective setup.

Making use of various BCH profitability calculators will help you determine the hash rate, which is usually an indication of the power required to successfully mine a block. Compare this to your local electricity and space costs, and voilà, you’re halfway there.

Calculating the overhead expenses against expected profitability will eventually help narrow down your potential return on investment (ROI). The result ROI will be a reflection of your true earnings. It is important to note that the BCH ecosystem has been designed to lower the rate of rewards to half, depending on the number of coins that have been released for circulation through an event that is known as a rewards halving.

To counter fiat’s inherent problems of inflation, Bitcoin Cash’s halving event happens automatically, either every four years or when 210,000 blocks have been mined, whichever comes first. The first BCH halving took place on April 8, 2020 that marked the end of the era for miners earning 12.5 BCH per mined block. The next halving will cut down the block reward to 3.125 BCH, which is estimated to take place in March 2024.

Historically, halving events have been responsible to weed out most inefficient miners until the market price normalizes. On the day when BCH first experienced halving, the cryptocurrency was trading at roughly $246.42.

While mining operations have always been overshadowed by legalities around cryptocurrencies, many governments have started to outright ban mining activities within their jurisdiction. For example, China allows its citizens to hold and trade Bitcoin but has recently unleashed a crackdown on mining activities. So, irrespective of cryptocurrency’s stature within the law of the land, it will be wise to check for specific regulations around mining operations.

Having a fair understanding of what’s ahead, let’s dive straight into the hardware requirements. Cryptocurrency’s inherent level playing field attracts miners from all walks of life, enabling a healthy mix of DIY and next-generation professional setups.

While some choose to repurpose their old laptop to join a mining pool and share reward profits with other miners from across the globe, others tend to go for a full node setup and compete against the professional miners for a much bigger reward. Additionally, you can also opt for pocket-friendly mining software that can connect your computer to a mining pool operation and pay a fraction of the mining rewards.

Depending on your pockets and passion for crypto mining, you will be able to settle into a suitable setup. There are a number of websites that allow you to configure the ideal mining hardware depending on your local electricity costs and hardware budget.

Hardware for mining cryptocurrency consists of either an application-specific integrated circuit (ASIC) or personal computer video cards, also known as a graphics processing unit (GPU), and its implementation heavily depends on the miner’s ambition. An off-the-shelf ASIC mining rig consists of a series of processor chips, an ethernet connection and a fan. Following a straightforward plug and play setup, ASCI miners require just the relevant IP address and the mining pool information to get started.

GPU configurations involve taking advantage of the processing power of the latest gaming graphics cards. In addition to graphics card(s), a typical GPU setup consists of common computer components including a motherboard or a computer processing unit (CPU), power supply, risers and random access memory chips (RAM), all packed into a mining frame.

Motherboards with a higher number of GPU slots are the most obvious choice for a miner, starting at six slots going all the way up to 18. Bundled with a compatible CPU, solid state drive (SSD) and RAM gives the setup a baseline for performance. Risers are the only component that doesn’t come from the typical setup and is purposely built for mining operations. Also known as GPU risers or PCI Express riser, the extension cables help with raising the GPUs way above the motherboard to improve cooling.

Before actually installing the power-house of your mining setup, known as the GPUs, it is important to finalize the placement of the setup within the mining frame. Once the GPUs are installed, a boot up of the system will confirm whether or not all the components are properly connected. After the setup is complete, the final piece of the puzzle is connecting the system to the BCH ledger via the internet.

On the software side, the GPU mining rig will need to be reconfigured with a mining-centered basic input/output system (BIOS) and hardware drivers. As GPUs continue to get more powerful and reduce electricity consumption with every iteration, miners across the world have caused a chip shortage, affecting the general PC gamer community.

In either case, both operations will involve a lot of heat and noise as a byproduct. While noise may not be the biggest concern for GPU configurations, every miner will need to consider a space that permits proper ventilation and cooling for the system’s peak performance. Failure to implement a cooling mechanism will eventually have a negative impact on your operational costs and the lifespan of your mining equipment.

Be sure to take your time in identifying the most suitable hardware for your specific mining needs. When it comes to running your own operation, considering the local wattage costs is paramount. In the long run, your hardware’s wattage will stand as the biggest operational cost, which ultimately impacts your earnings.

Depending on your location, procuring a hardware unit with lower consumption and output might make more monetary sense if the potential output can suffice the local electric upkeep costs. In places with cheaper electricity and higher hardware costs, miners can get away with running older and less efficient components, subsequently and drastically reducing their initial investment or the costs associated with upgrading their hardware.

While some mining rigs are purposely built to support only a specific token, others allow miners to mine multiple tokens, giving you the option to try out mining for more crypto ecosystems. The road to becoming a professional miner, however, relies heavily on reinvesting your earnings back into the rig toward a more power efficient and high performant setup.

BCH mining: Getting your hands dirty

By now, you have evaluated all the possible options at hand to start off your new venture as a BCH miner. The obvious first step is to get a BCH wallet address for collecting rewards from the deployer account. You can use an existing wallet or create a new one from a reputed source. However, miners often prefer setting up cold wallets or hardware wallets that are run on USB sticks. Unlike the online wallets, the offline nature of the cold wallet protects it’s crypto holdings against online attacks and can be accessed with only a private key and complementing software.

Setting up an end-to-end mining setup comes with its own set of operational and possibly legal challenges that not many are keen to tackle. Arguably one of the easiest ways to test the water on BCH mining is through a mining pool. Joining a mining pool allows for first-hand exposure to participate in the ecosystem as a miner without the inherent complexities that comes with it. All you need to have is a working computer, internet connection and software that is developed and distributed by the crypto mining company.

A pool works by spreading out the computational tasks among multiple miners, thus increasing its chances to solve a block faster than the competition. Finding out the most suitable pool will involve cross checking your system’s compatibility against a pool’s software infrastructure, payout structure and transparency around task assignment and stability.

While finding out that the perfect pool may require some technical knowledge, as a miner, you’ll always have the option to move to a different pool in the future. Some mining pools prioritize tasks based on the participant’s computational abilities, so it becomes important to join a pool that provides a level playing field or gives you the upper hand in task assignments.

Mining pools are powered by decentralized software that run on every PC connected to the pool. The software acts as a gateway to the node running the overall operation. All it takes for you is to download and install a software and to log in to your account, then the pool starts allocating tasks based on your internet bandwidth and computational power.

As the software systems are built to compliment your existing hardware infrastructure, you will need to run a software that can take the highest advantage of your rig’s specification against BCH’s SHA-256 algorithm. In short, it acts as a gateway to the pool servers with respective hashrates.

What to do with mined BCH

After you have successfully mined your first BCH block and earned the miner’s reward, you will be able to accurately calculate your earnings against the investment. Moreover, you can now use this reward to trade it for fiat currency through a crypto exchange or a peer-to-peer service.

To be a winner in the mining race, one needs to upgrade their hardware from time to time, either by adding to the series of hardware, or replacing it with a more capable machine. BCH can also be traded for goods and services thanks to the increasing number of crypto-friendly online businesses.