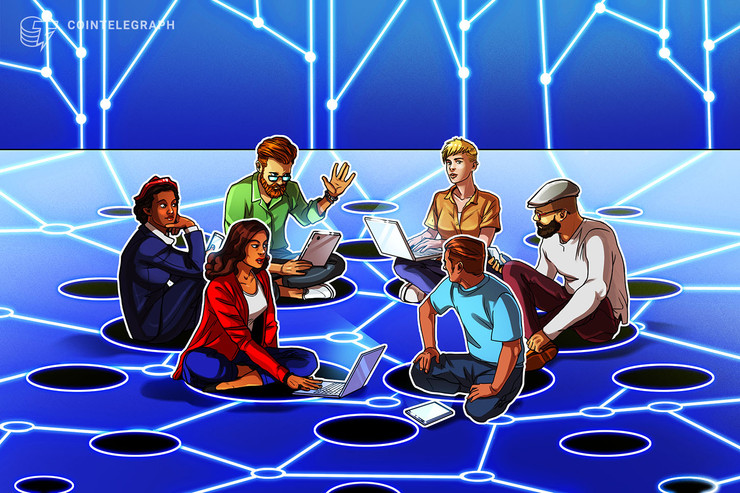 What is the Cardano Project?

Cardano is an open-source blockchain platform powered by ADA cryptocurrency token, widely used to host globally decentralized systems and applications. The Cardano ecosystem was founded in 2015 by Charles Hoskinson, one of the founding members of Ethereum.

Unlike the Bitcoin (BTC) origin story, Cardano lacked an authoritative white paper to predetermine its position within crypto finance. Instead, Hoskinson envisioned building layers of a system to solve problems that exist within other crypto ecosystems.

With this goal in mind, Hoskinson founded three entities — the Cardano Foundation, Input Output (IOHK) and EMURGO — to develop a blockchain ecosystem built on a proof-of-stake consensus protocol.

The Cardano ecosystem is built as a third-generation blockchain platform consisting of two layers — a settlement layer (CSL) and a computation layer (CCL) that serve as the fundamental components of every transaction. 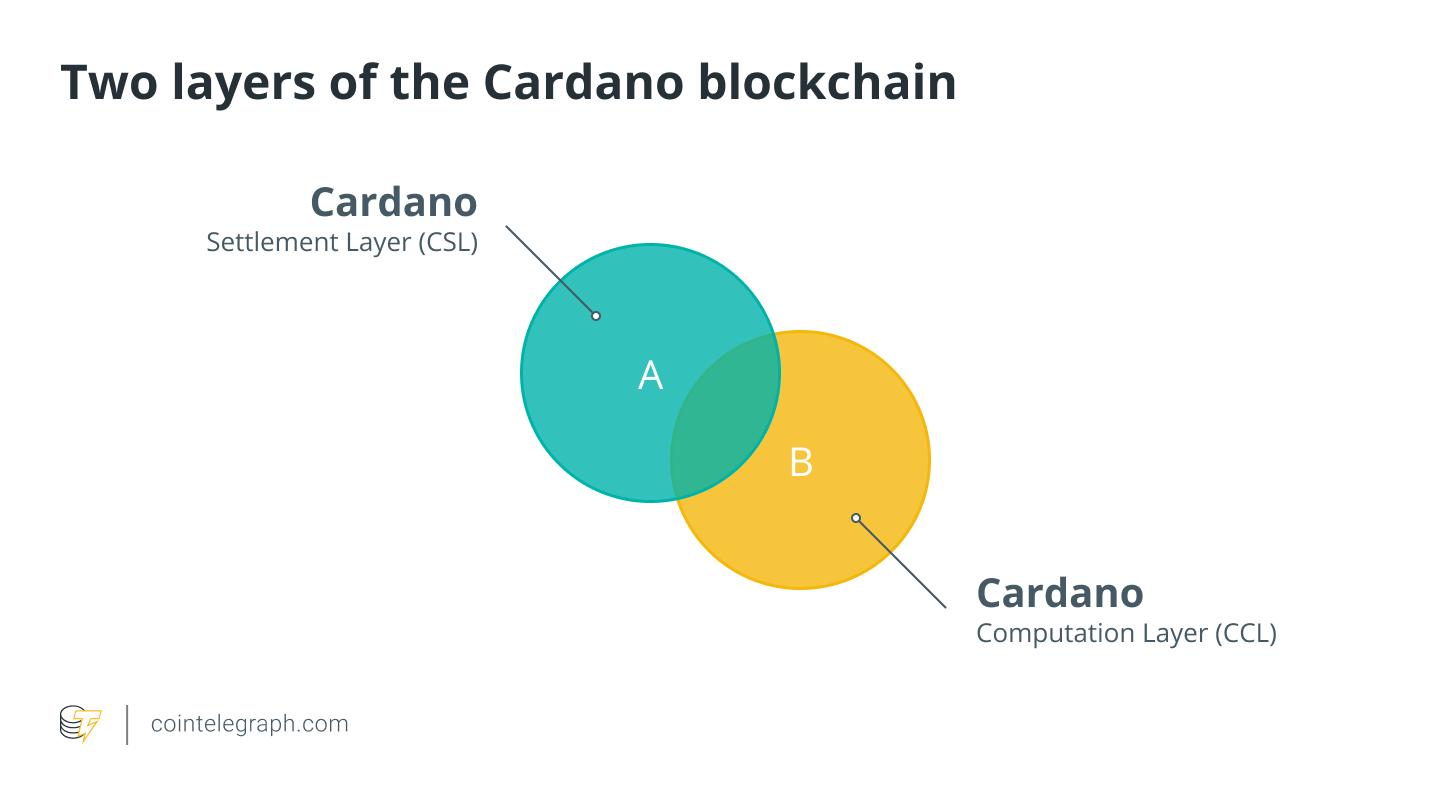 Cardano’s developers wanted to build a system that separates the value of a transaction from its computational data.

The Cardano Settlement Layer is designed to manage the movement of the value (or the currency) between the sender and the receiver. In other words, the settlement layer is the routing layer for all the control layers and systems.

The two layers of the Cardano blockchain allow the ecosystem to proactively implement changes to support faster and more secure transactions while eliminating any user metadata that proves to be irrelevant to the process.

The development of the Cardano ecosystem follows a five-step process where each step represents a set of functionalities to be implemented sequentially over time. The five steps or eras of the Cardano roadmap are Byron, Shelley, Goguen, Basho and Voltaire. 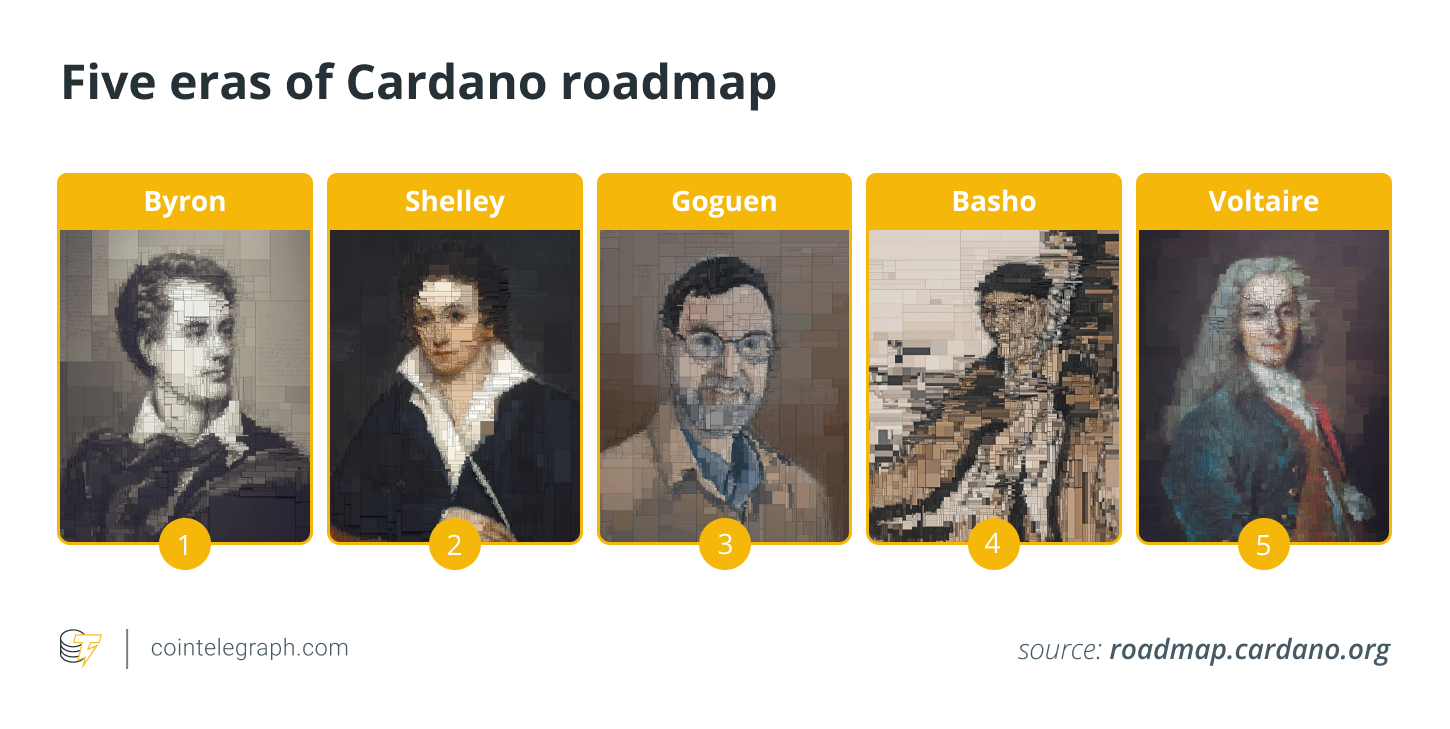 The Byron era represents the two years of development (2015–2017) in which the first version of the Cardano blockchain was launched, and the ADA cryptocurrency debuted. The in-house ADA token was named after Ada Lovelace, an English mathematician credited for her work as one of the first computer programmers.

Along with the launch of the Cardano blockchain and ADA token, IOHK and Emurgo released official ADA-supported wallets named Daedalus desktop wallet and Yoroi light wallet, respectively. Let’s check out some of the main differences between the two Cardano ADA wallet offerings. 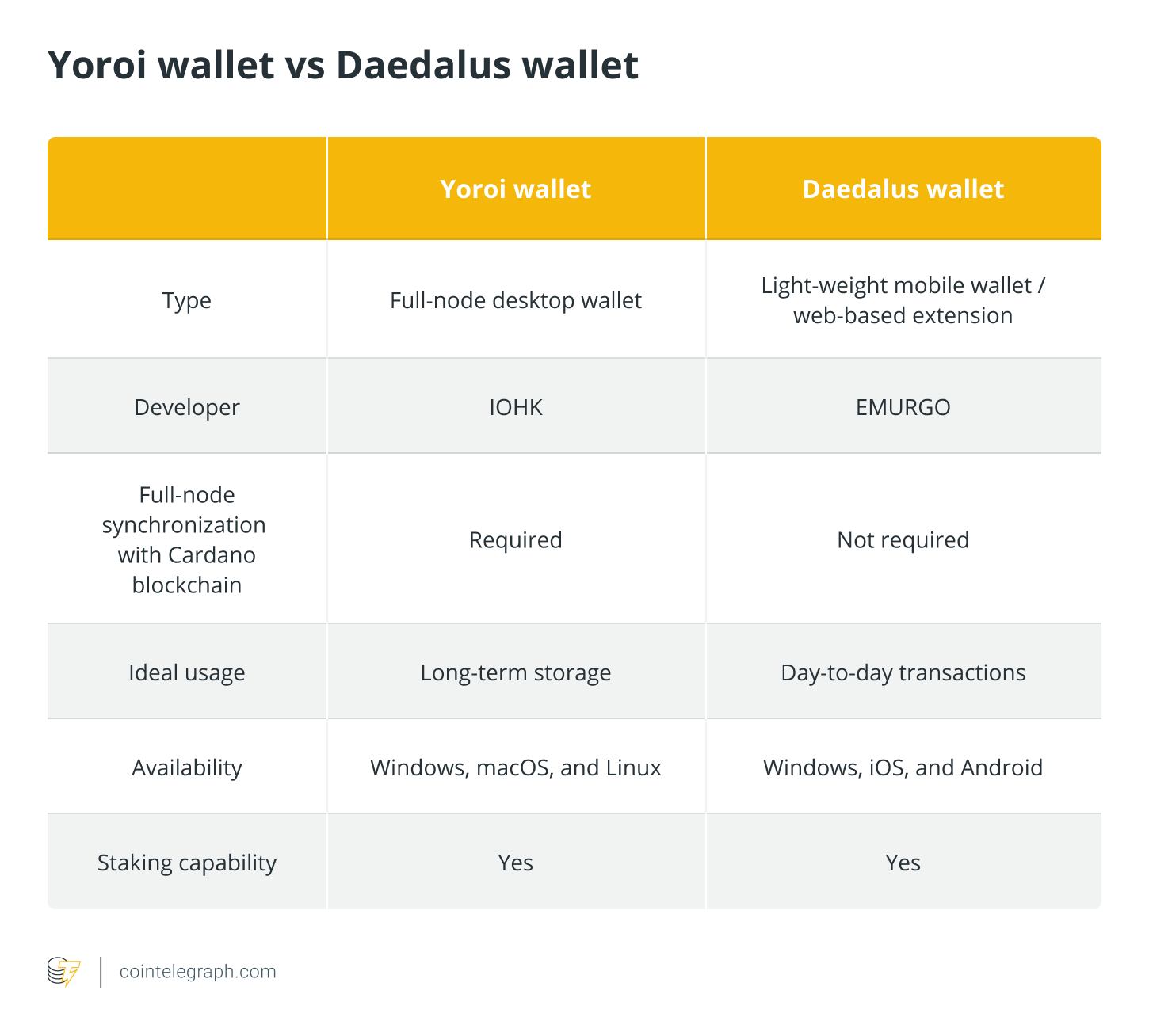 The Byron era was about forming a community and getting people involved in constructing the future blockchain, which resulted in the first critical technological advancements.

The Shelley era is dedicated to the growth and development of the existing Cardano ecosystem. The network was federated throughout the Byron era, but as the Shelley era continues, more and more nodes will be operated by the Cardano community. One of the main goals of this phase is to decentralize the node network by involving more network participants and is aimed at achieving greater security and robustness.

This stage also sees the introduction of a reward system and staking principles that encourage users to participate in the Cardano ecosystem.

The Goguen era represents the introduction of smart contracts and decentralized applications (DApps) in the Cardano blockchain. This phase of development runs parallel to the Shelley era and is focused on the creation of a purpose-built smart contract development language and execution platform, Plutus.

Once implemented, Plutus will enable users to create and execute functional smart contracts on the Cardano network without prior technical knowledge. This era also sees the introduction of Marlowe, a domain-specific language (DSL) for financial contracts built on Plutus.

In addition, the Goguen era will add support for a multi-currency ledger that will enable users to create new natively-supported fungible and nonfungible tokens.

The Basho era is dedicated to improving the underlying performance of the Cardano network in terms of operability, scalability and optimization. Core developments include sidechain implementations with enormous potential to expand the network's capabilities. By offloading work from the main chain onto a sidechain, sidechains can be used as a sharding technique to boost the network's capacity. They can also be used to test new features without compromising the main blockchain's security.

The Voltaire era is the final stage of the Cardano roadmap dedicated to building a self-sustaining governance system supported by the network participants. This phase will introduce voting and treasury systems, allowing users to share network improvement proposals and fund the suggested developments. Following the voting process, a portion of all transaction costs will be pooled to generate cash for development activities.

The completion of this phase will signal a truly decentralized Cardano network, working independently of IOHK's management. This means that Cardano will be completely decentralized and will no longer be managed by IOHK once both a vote and a treasury mechanism are in place. Instead, the community will be in charge of Cardano's future, with everything they need to expand and evolve the network thanks to IOHK's safe, decentralized foundation.

ADA is the in-house token of the Cardano blockchain that resides on the Cardano Settlement Layer. The maximum supply of the ADA cryptocurrency is limited to 45 billion tokens, to be released over time through minting. The hard limit on the total token supply guarantees a deflationary attribute to ADA. However, the ecosystem is destined to showcase an inflationary trend until the ecosystem releases a major portion of the reserves for circulation, estimated to initiate from 2030.

Just like any other popular cryptocurrencies like Bitcoin (BTC) and Ethereum (ETH), ADA can be exchanged for fiat currencies such as the United States dollar and stored on crypto wallets. In addition to Cardano’s native wallet offerings like Daedalus and Yoroi, third-party wallet services also support ADA storage and transfers.

ADA can also be stored securely in hot and cold wallets. Check out Cointelegraph’s guide on choosing the perfect crypto wallet for Bitcoin based on your unique requirements.

ADA is built to perform as a secure exchange of value that runs on Ouroboros, a group of proof-of-stake blockchain consensus protocols. Moreover, the Cardano blockchain can host other cryptocurrencies, nonfungible tokens, smart contracts and DApps.

Use cases of the ADA cryptocurrency token

ADA and the Cardano ecosystem are supported by a strong community of investors and developers. As the cryptocurrency continues to gain momentum in terms of value, enthusiasts have slowly started accepting ADA as payment.

The most popular mode of payment is peer-to-peer (P2P) transfers between the sender and the receiver. In this type of transaction, the sender can send existing ADA tokens directly to the receiver’s wallet address with no intermediaries. With its rising popularity, businesses have started to integrate dedicated ADA payment gateways, allowing customers to make online purchases with ADA.

Users can also earn ADA tokens by validating payment transactions on the Cardano blockchain, a process commonly known as staking. This involves adding your existing ADA holdings to a staking pool, which is then repurposed by the node operators to validate and confirm transactions in real-time.

Note that ADA wallets cannot be paired with multiple staking pools. Readers are advised to do their research and identify long-term benefits when staking cryptocurrencies.

The ADA staking rewards, or yields, are usually predetermined and vary from pool to pool. Every wallet can be paired with only one staking pool. Users are advised to do their research before making any investments or commitments to ADA staking pools.

The future of Cardano Foundation

The Cardano Foundation is backed by a strong developer community led by Hoskinson and supported by investors around the world. The community focuses on building real-world financial tools that can help ADA to realize price increases based on use-case-driven adoption.

The Cardano sidechains provide the option for developers to build applications based on the other frameworks and consensus that are not native to the Cardano ecosystem.

Halfway across the predetermined roadmap, ADA has managed to overshadow most cryptocurrencies in terms of price performance and market capitalization.