How to Mine Ethereum. Guide for beginners 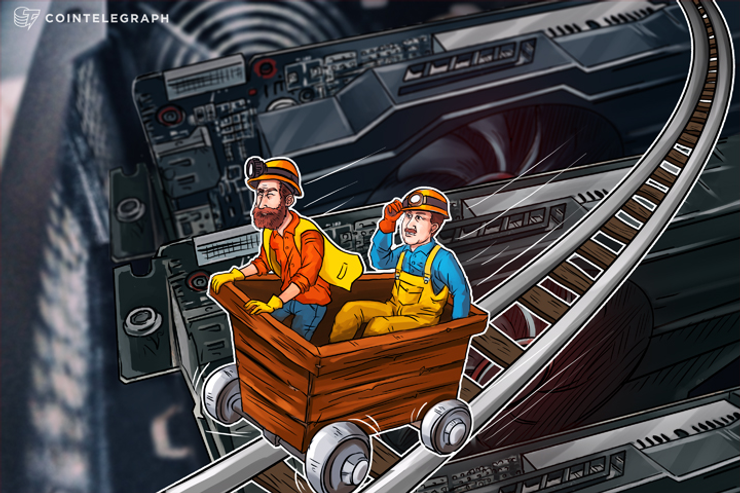 To put it simply, cryptocurrency mining is a process of solving complex mathematical problems. Miners are essentially the cornerstone of any cryptocurrency network as they spend their time and computing power to solve those math problems, providing a so-called ‘proof of work’ for the network, which verifies Ether transactions. Besides that, miners are responsible for creating new Ether tokens through this process, as they receive rewards in Ether for successfully completing a proof of work task.

As more and more miners join in, the problems automatically become more difficult to solve, which means more time and computational power is required to solve them and the rewards become smaller. However, as Ether’s value keeps surging upwards, the rewards received by miners are still quite substantial. Moreover, many people see mining as an ideological incentive, a mean of directly supporting the network. A little about Ethereum mining…

For each block of transactions, miners apply their computational power to solve the mathematical puzzle.

To be more specific, the miners take the block’s unique header metadata, which includes a time stamp and a software version, through a hash function, which generates a fixed-length string of case-sensitive random numbers and letters. This string is called hash, and if the miner finds a hash that matches the current target, the block will be considered mined and will be broadcast to the whole network for other nodes to validate and add the transaction to their copy of the Blockchain.

Hash — a fixed-length unique sequence of random digits, which can be created from data of any size. Even though Bitcoin is still the most dominant and valued cryptocurrency in existence, certain problems are plaguing the network. One of those problems is the ever-increasing centralization of Bitcoin mining. Back in the day when the network first emerged, individual mining from a powerful enough computer or even a laptop was a reality. These days, however, with the advance of ASICs mining rigs, the only entities being able to make a profit from the process are huge firms in possession of enormous mining rigs. Those rigs require a lot of electricity to operate and are very expensive to both install and service.

When it comes to Ethereum, the process is a little bit different. Ethereum rewards its miners based on the proof of work algorithm called Ethash, which actually encourages decentralized mining by individuals and doesn’t support ASICs mining. Still, assembling a powerful enough computer can be quite costly and your electricity bill will be a lot bigger than usual.

Bitcoin’s reward for successful mining halves about every four years, correlating with the limited total circulating amount of tokens. Currently, the reward for successfully mining a block of transactions on Bitcoin network stands at 12.5 Bitcoins. Based on the Ethash algorithm, the successful mining on Ethereum network is valued at three Ether, plus all transaction fees and code-processing fees. But, on average, it takes about 10 minutes or more to verify and mine a block of Bitcoin transactions, whereas Ethereum’s average aims to be at around 12 seconds. This is achieved through Ethereum’s GHOST protocol, which enables such quick confirmations, but also allows for more blocks to be left orphaned. So, potentially, you can mine several blocks of Ethereum in the same amount of time it takes to mine just one Bitcoin block.

At the time of writing, there are almost 17 mln of the total 21 mln Bitcoins in circulation, while just half of the total supply of around 92 mln coins will have been mined on Ethereum network by its fifth year of existence. The transactions are also priced differently on the two networks. In Ethereum, transactions are called ‘Gas,’ which essentially powers every operation on the network. This means that to make any changes to the Blockchain the user is required to spend some Ether. Gas is calculated depending on the storage needs, complexity of the action and the bandwidth required. On the other hand, Bitcoin transactions are limited by the maximum block size, which stands at one MB, and they compete equally with one another.

Finally, the main difference is perhaps that Ethereum boasts its own Turing complete internal code, which means that basically anything can be calculated, providing there is enough time and computing power available. Bitcoin, on the other hand, doesn’t have this option. However, while there are indisputable advantages to having a Turing-complete code, its complexity entails certain security complications, which contributed to the famed DAO attack and the subsequent hard fork of the network.

Read more: What is mining

It is important to note that mining Ether using CPU is neither profitable nor worthwhile, as even entry-level GPUs are about 200 times faster than CPUs for mining purposes. Before buying a graphics card, you should consider the costs associated with the purchase itself as well as the energy consumption. Most importantly, you will need to consider the hash rate performance, which is the speed at which the math problem will be solved.

You might also consider setting up a mining rig, a machine that is composed of several GPU units to increase your hash rate and, by extension, your chances of successful mining.

Below is a comparative table of some of the most efficient GPUs on the market today.

Once you’ve chosen and purchased your hardware, you will need to install the software. First of all, you’ll need drivers for your graphics card, which can be found on the manufacturer’s website or they will be provided along with the card itself.

Once set up, your node will be connected to all the other nodes and the network itself. This enables you to start mining as well as deploy your own smart contracts, build decentralized apps and send transactions.

Before you start mining Ether, it is possible to set up a private test network. It is an extremely useful tool in case you want to test public contracts, try and develop a new technology or just test your mining capabilities. In a private test network, you are the only user, which means you are responsible for finding all blocks, validating all transactions and executing smart contracts. An Ethereum sandbox, so to speak. Currently, this is done via a command line, with services like Geth providing such options.

Knowing at least an approximate hash rate of your device will also be of huge help to you when it comes to calculating potential profits. You can use this profitability calculator, which will automatically calculate your hash rate based on the hardware you’re using and the electricity costs in your country. Essentially, you will be looking for the highest possible hash rate, as the higher it is, the quicker you can mine Ether. Once you have set up a node and connected it to the network, in order to begin mining Ether you still need to install a mining software called Ethminer for Windows. The GPU mining instructions for other operating systems can be found here. Ethminer makes your CPU or GPU run the hashing algorithm essential for securing the network through proof of work. The interface is basically a command line, but future versions of Ethereum network are expected to have a more user-friendly interface. More information on all of the above can be found on Ethereum’s official website.

How and when do I get paid?

Once you’ve successfully mined a block, you are entitled to receive a three ETH reward. Along with the reward, miners receive fees associated with the transaction. Those fees serve as another incentive for miners to do their job, as many miners will prioritize transaction with higher fees. The reward then gets transferred to the Ethereum wallet linked with the miner or the miners’ pool, which happens almost instantaneously.

Your approximate income can be calculated based on your hash rate and electricity consumption. Also, don’t forget to factor in the costs of your chosen hardware and possible upgrades on your bandwidth. There are several Ethereum profitability calculators available online, provided by services such as CryptoCompare, CoinWarz, WhatToMine and MyCryptoBuddy.

For beginners, joining an Ethereum mining pool can prove to be a lot more profitable than mining on their own. A mining pool is a group of miners who combine their efforts and computational power in order to improve their chances of solving the cryptographic puzzles and earning Ether. The profits are then split between all the participants proportional to the contributed computational power. There are many different factors that you will need to consider before joining a mining pool. Such as the computational power of the entire pool, the payout structures, fees, and so on. Moreover, some pools might not be around forever. Typically, the fees can range from zero percent to around two percent. Depending on a particular pool, you can receive payouts from once every 24 hours, to four to six times a day. For such frequent payouts, most pools will require balances to be higher than one ETH.

Joining a pool is easy, as many of them don’t even require registration. To join some pools, however, you will need to go through a signup process on the website. Currently, the biggest Ethereum mining pool with a 25 percent of the network’s hashing power is Ethpool and Ethermine, which despite having two separate websites are basically one huge mining pool. Other big pools include DwarfPool, a third largest Ethereum pool with about 13 percent of the network’s hash rate as well as Ethfans and f2pool, the second and fourth largest pools on the network. The latter two pools are only available in Chinese, which might not be suitable for some of the readers.

Is mining Ethereum still worth it?

When it comes to most cryptocurrencies, the mining difficulty and, by extension, the costs associated with it are only going upwards. However, as you can see on the chart below, Ethereum mining difficulty dropped by 50 percent in October 2017. This is most likely due to the reward decreasing from five ETH per block to three ETH. However, the mining difficulty seems to be steadily regaining its positions. As more and more miners join in the process, it will only become increasingly difficult and costly. But, Ethereum’s value is steadily increasing and will most likely continue to do so, thus making mining potentially worthwhile in the long term.

Nonetheless, big changes are coming to the Ethereum network. Sometime in the foreseeable future, the team behind it is planning to ditch its proof of work algorithm and instead adopt a ‘proof of stake’ framework. Once this happens, the network will no longer need miners to secure and confirm the transaction, as this will be done by token owners. The creators of new tokens will be chosen in a deterministic way, depending on their wealth, which is also defined as a stake. Most importantly, miners will no longer receive block rewards, only collecting the transaction fees. The recent drop in the Ethereum block difficulty is often explained by the decrease of the reward amount to three ETH and, perhaps, it was done in preparation for the inevitable transition to a new algorithm. The update will come in the form of a hard fork, once again splitting the network in two. So, those who wish to continue mining for rewards might be able to do so on the old version of Ethereum. With no fixed date for the update, it’s really hard to predict how profitable getting into mining at this point can become.