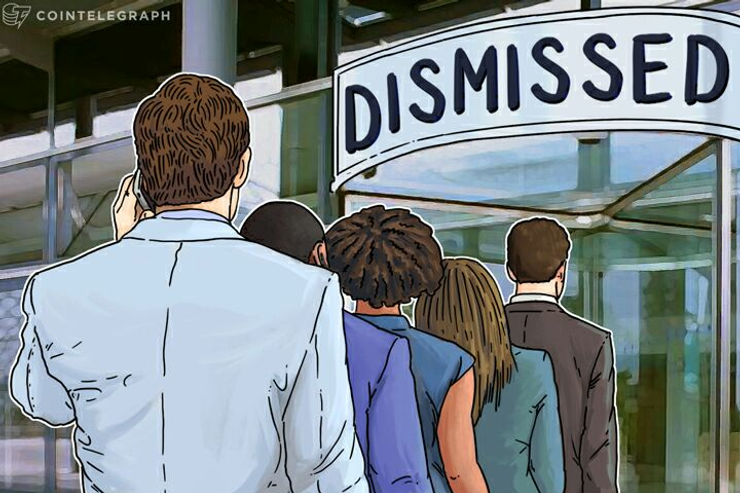 Imagine a vending machine that not only takes money from you and gives you a snack in return but also uses that money to automatically re-order the goods. This machine also orders cleaning services and pays its rent all by itself. Moreover, as you put money into that machine, you and its other users have a say in what snacks it will order and how often should it be cleaned. It has no managers, all of those processes were pre-written into code. 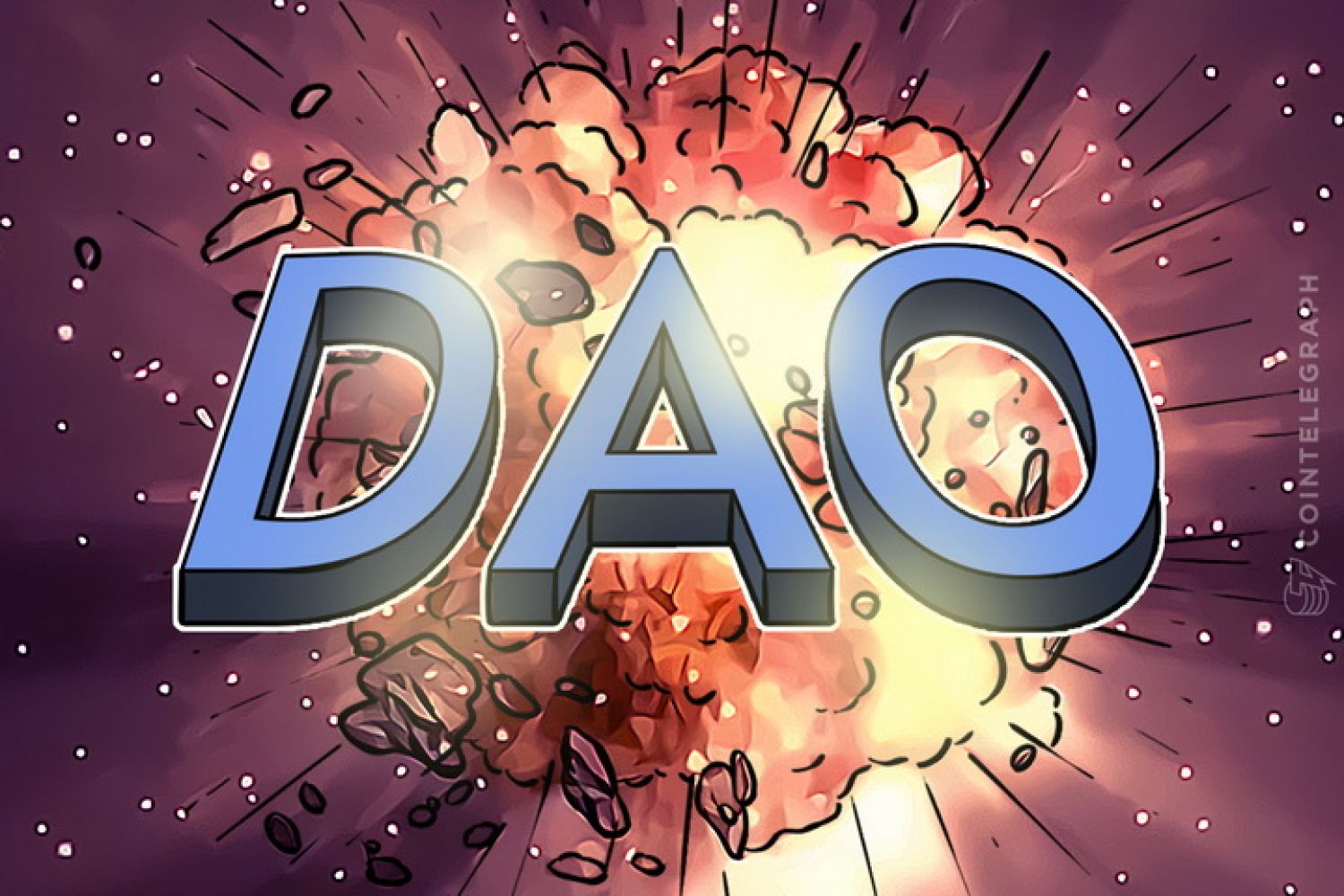 This is, roughly, how a DAO or a Decentralized Autonomous Organization, works. The idea of such management model has been circulating in the cryptocurrency community ever since Bitcoin managed to get rid of middlemen in financial transactions. Similarly, the main idea behind DAO is establishing a company or an organization that can fully function without hierarchical management.

It is essential to draw a distinction between DAO as a type of organizations and The DAO, which is merely a name of one of such organizations. The project was one of the first attempts at creating a DAO and it failed spectacularly within due to a mistake in its initial code.

Initially, Bitcoin was considered to be the first ever fully-functional DAO, as it has a pre-programmed set of rules, functions autonomously and is coordinated through a distributed consensus protocol. Since then, the use of smart contracts was enabled on the Ethereum platform, which brought the creation of DAOs closer to the general public and shaped their current look.

But what does a DAO need to be fully operational? First of all, a set of rules according to which it will operate. Those rules are encoded as a smart contract, which is essentially a computer program, that autonomously exists on the Internet, but at the same time it needs people to perform task that it can’t do by itself.

Once the rules are established, a DAO enters a funding phase. This is a very important part for two reasons. Firstly, a DAO has to have some kind of an internal property, tokens that can be spent by the organization or used to reward certain activities within it. Secondly, by investing in a DAO, users get voting rights and subsequently the ability to influence the way it operates. 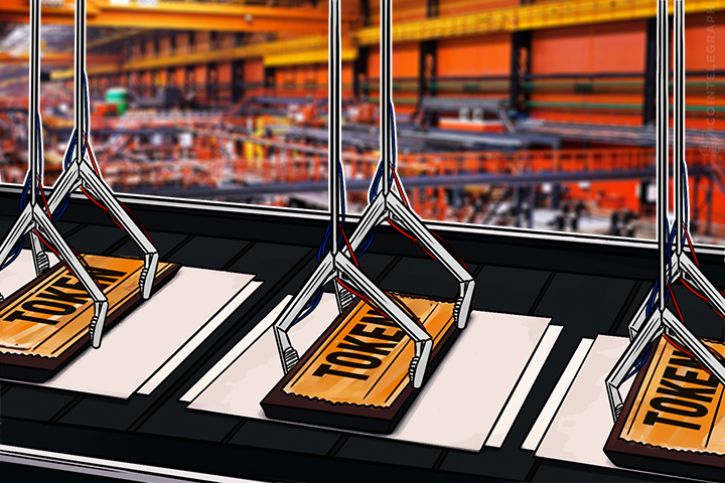 After the funding period is over and a DAO is deployed, it becomes fully autonomous and completely independent from its creators as well as anyone else for that matter. They’re open source, which means their code can be viewed by anyone. Moreover, all of the rules and financial transactions are recorded in the Blockchain. This makes DAOs fully transparent, immutable and incorruptible.

Once a DAO is operational, all the decisions on where and how to spend its funds are made via reaching a consensus. Everyone who bought a stake in a DAO can make proposals regarding its future. In order to prevent the network being spammed with proposals, a monetary deposit could be required to make one.

Subsequently, the stakeholders vote on the proposal. In order to perform any action, the majority needs to agree on doing so. The percentage required to reach that majority can vary depending on a DAO, as it can be specified in its code.

Essentially, DAOs enable people to exchange its funds with anyone in the world. This can be done in the form of an investment, a charitable donation, money raising, borrowing and so on, all without an intermediary. One potentially major problem with the voting system is that even if a security hole was spotted in an initial code, it can’t be corrected until the majority votes on it. While the voting takes place, said hackers can exploit a bug in the code.

Finally, it is important to note that a DAO isn’t capable of building a product, writing a code or developing a piece of hardware. Instead, a contractor can be hired to perform a required task. This appointment is done through the same voting process, while a smart contract will ensure a swift payment upon the correct completion of the task.

How to become DAO shareholder and why

Investing in a DAO is relatively easy, especially if you know how to buy Ether or Bitcoin and already have a wallet. All you really need to do is buy tokens of a particular DAO, which is roughly equivalent to buying shares of a company.

Once the funding phase is closed, you will be able to make proposals as well as vote on them and perhaps even make a profit. The amount of purchase tokens will correlate with the amount of voting power you will get.

Before you invest, though, be sure to know exactly what you’re getting yourself into. DAOs are completely transparent and their underlying codes are always open-source, which means you have a chance of reviewing said codes in order to be sure that there are no bug or mistakes in it. 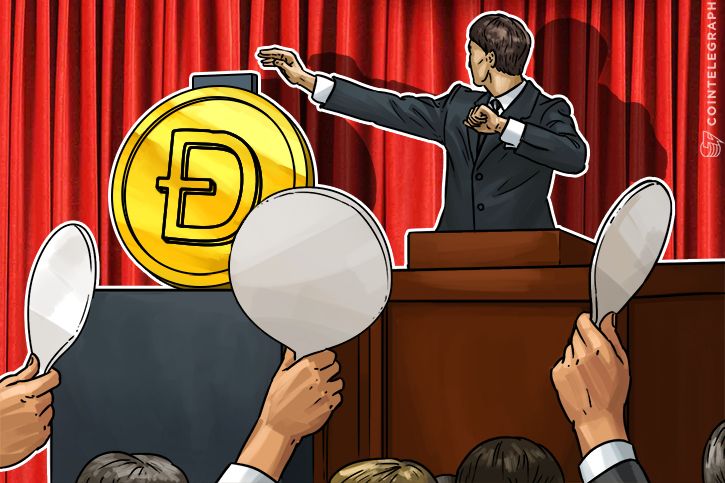 Dapps, or Decentralized Applications, are essentially unstoppable apps, which work on the Ethereum Blockchain and are powered by smart contracts. The main difference from ordinary apps is that Dapps are fully autonomous, they don’t require a middleman to operate and basically immune to censorship. In other words, they establish a direct connection between a user and a service. Through that, users can fully control the information and data they share.

DAOs are basically a very ambitious breed of decentralized apps. As described in the Ethereum white paper, they fall into ‘other’ category, which includes voting and governance systems. The two other types of Dapps are money managing applications and apps where money is involved, but they also require another piece (insurance, charity, property, etc.). 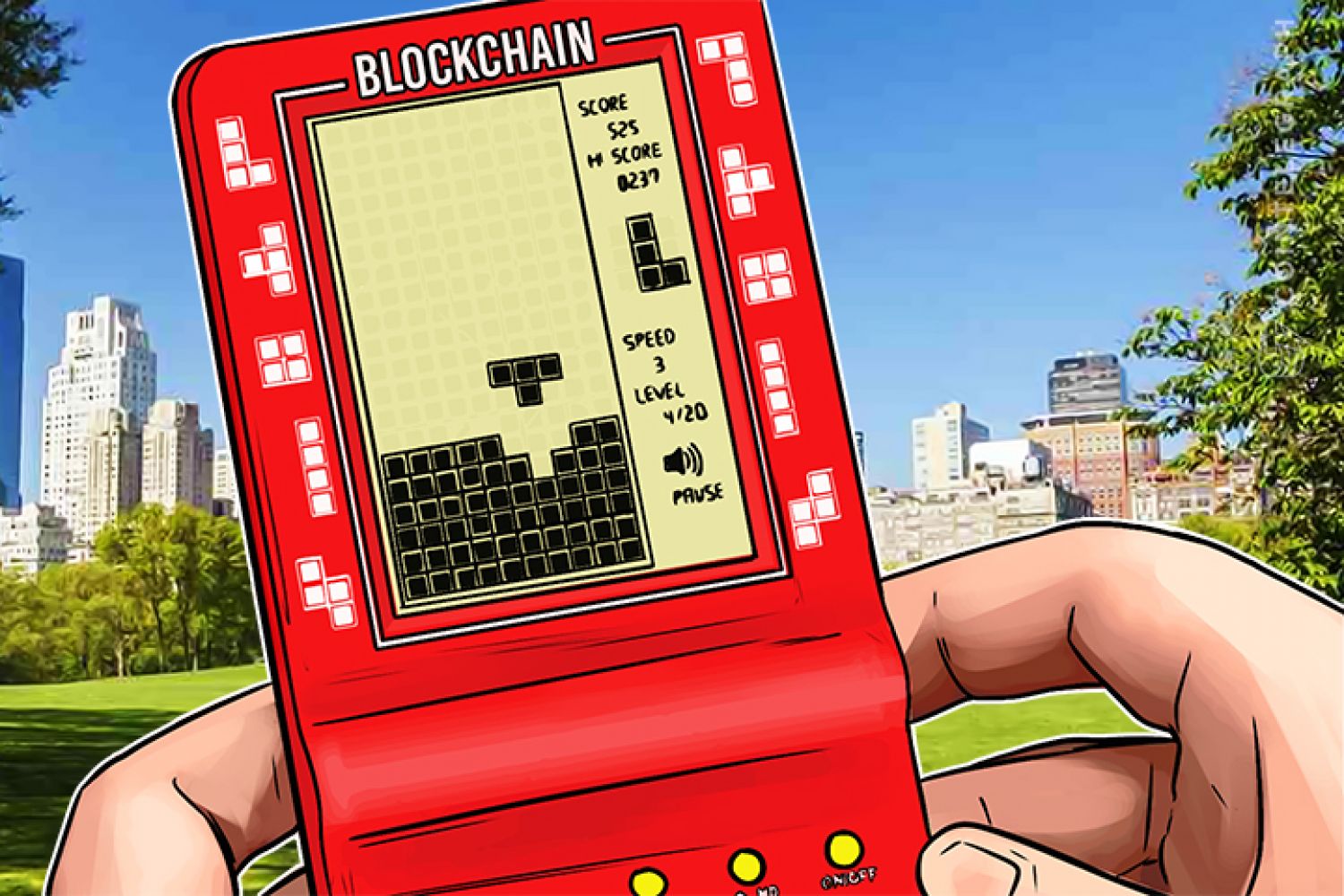 Story of The DAO

‘The DAO’ is a name of one particular DAO, which was created by a team behind a German startup slock.it which specialized in ‘smart locks’ that let people share their property in a decentralized version of Airbnb. The DAO was deployed in May 2016, when it was funded via a token sale. Somehow, the project managed to become the most successful crowdfunding campaign in history, having raised over $150 mln. 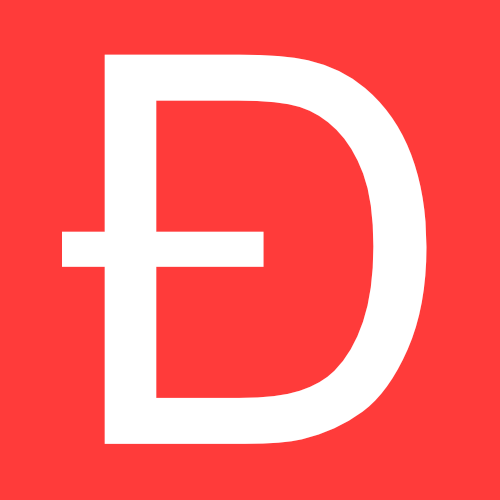 The DAO’s code wasn’t perfect, and as it was open-source and available to view for everyone, someone found a bug to exploit. So, on June 17th an anonymous hacker or a group of hackers, started siphoning money from The DAO into a ‘child DAO,’ which copied The DAO’s structure. Before the draining of funds was stopped, the hacker managed to steal more than $50 mln worth of Ether.

Despite the fact that a bug in The DAO’s code was exploited to steal the funds, the hack seriously undermined both Ethereum’s reputation as a hosting platform and the very concept of DAOs. Moreover, it caused the Ethereum network to split in two. However, it is important to realize that all of this could’ve been avoided by additionally testing the code. Perhaps, this hack was an important milestone in the developing history of DAOs which showed the potential weaknesses and, undoubtedly, such weaknesses will be taken into consideration by future DAOs. 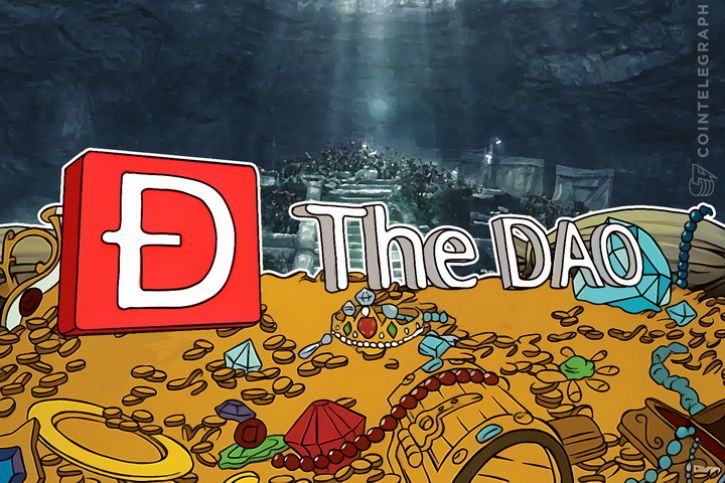 Undeniably, the very concept of DAOs is extremely exciting, as it strives to solve everything that’s wrong with how modern-day organizations are run. A perfectly structured DAO gives every investor an opportunity to shape the organization. There’s no hierarchical structure, which means every innovative idea can be put forward by anyone and considered by the entire organization. A set of pre-written rules that every investor is aware of before joining the organization as well as the voting system leave no room for quarreling whatsoever.

Moreover, as both putting a proposal forward and voting for it requires an investor to spend a certain amount of money, it pushes them to evaluate their decisions and not waste time on ineffective solutions. Finally, as all the rules, as well as every single financial transaction, are recorded in the Blockchain, available for review to anyone, DAOs are completely transparent. Everyone taking part helps decide on how to spend the funds and they can track how those funds are spent. 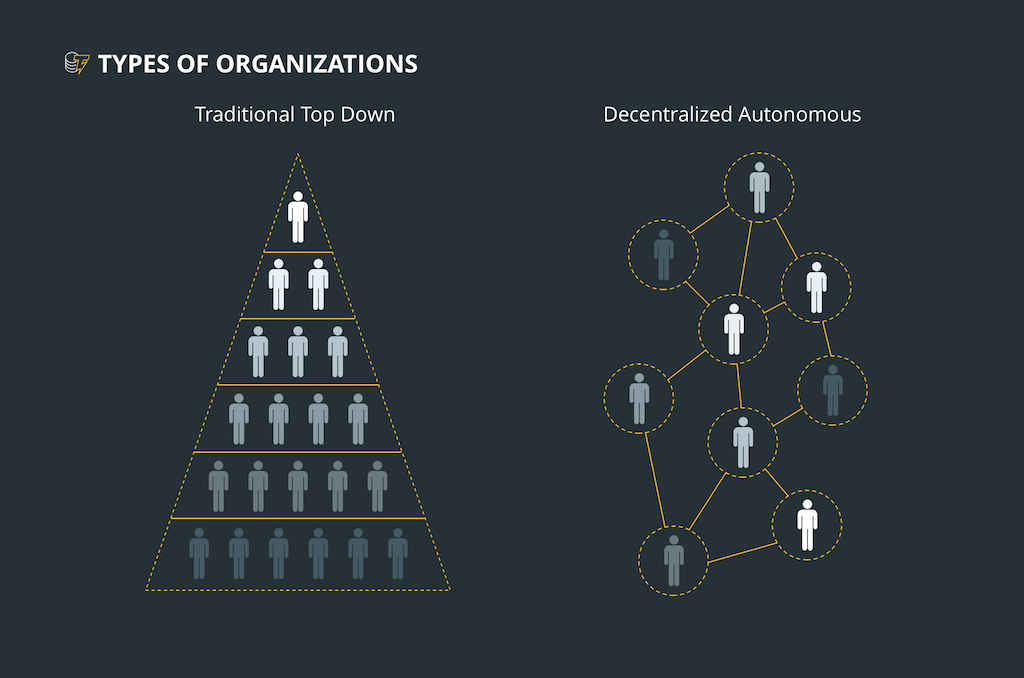 DAOs, just like pretty much everything else connected to cryptocurrencies, are an extremely new and, to some extent, a revolutionary technology. Naturally, projects like these will attract a lot of criticism. For instance, MIT Technology Review considers the idea of entrusting the masses with important financial decisions a bad one and the one that isn’t likely to yield any returns. In their article, they say that much in the world will have to change for the DAO-related projects to succeed on any scale. 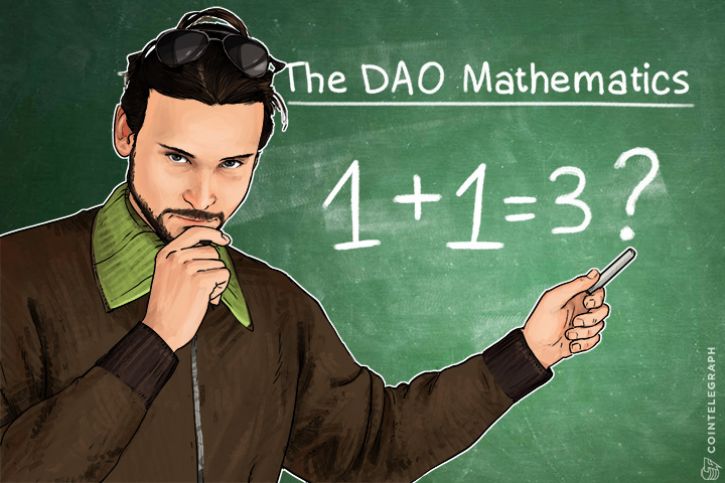 Apart from quite a conservative sentiment that masses can’t be entrusted with investments, there are other concerns surrounding DAOs. The most urgent problem, especially after The DAO hack, is a security problem and it is connected with the ‘unstoppable code’ principle. During the attack, observers and investors watched helplessly as the funds were siphoned out of The DAO, but couldn’t do anything, as the attacker was technically following the rules. Of course, such attacks can be avoided if the code is well-composed and bug-free.

Finally, in order for startups that operate as DAOs to be able to conduct business outside of a Blockchain network and communicate with a physical world of financial instruments and intellectual property, there needs to be some kind of a legal framework. Legal uncertainty is an issue that has been plaguing the world of cryptocurrencies due to the technology within it being so new and radically different, but the solution seems to be just a matter of time.

Essentially, any autonomous organization with a decentralized governance and budgeting system can be called a DAO. This makes practically every decentralized cryptocurrency network a DAO, especially considering the initial crowdfunding period the precede the official launch. Below is a short list of some of the most well-known successful DAOs.

BitShares — A decentralized cryptocurrency exchange, which markets itself as a fast and fluid trading platform, providing the freedom of cryptocurrency combine with the stability of the dollar.