Initial DEX offering (IDO): A beginner's guide on launching a cryptocurrency on a decentralized exchange 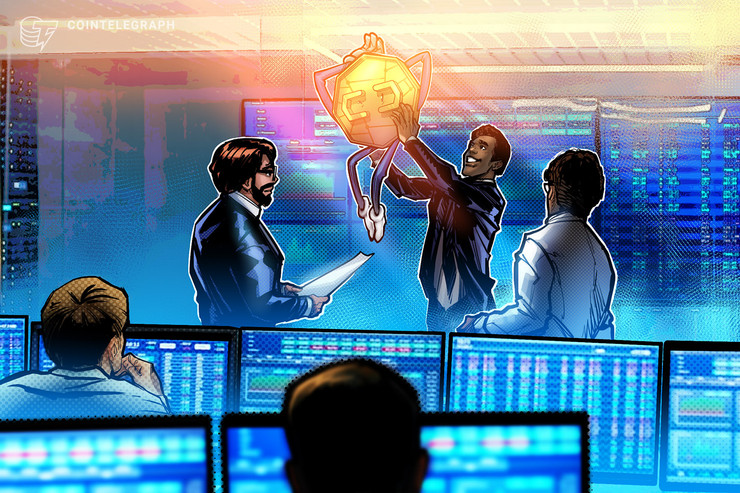 The maturation of the cryptocurrency industry as a whole has led to the creation of the initial DEX offering (IDO), one of many creative fundraising approaches. But the first fundraising approach in crypto was the initial coin offering (ICO), which in 2017 generated a lot of ill will. It also turned many early investors into overnight millionaires.

So what is an ICO? In simple terms, an ICO is an unregulated approach to crowdsourcing funds from retail investors. The main challenges with ICOs concerned the lack of control and investor protections. Without any control mechanisms, project teams were not subject to any due diligence.

Pretty much any ICO project could promise impressive gains, and many did. Numerous ICO projects turned out to be quick money grabs, or worse, outright scams. They also cast a negative light on the crypto industry and discouraged many new investors from hopping on board.

But before diving into the details behind the IDO, DeFi and DEXs are covered briefly here first.

What is an initial DEX offering?

An initial DEX offering (IDO) is a fundraising approach that pools investment capital from retail investors. The IDO was created to compensate for the shortcomings of the "traditional" ICO crypto crowdfunding model. Because an IDO works with a DEX, as opposed to a centralized exchange, DEXs can be thought of as decentralized liquidity exchanges.

IDOs are the newest model for crypto projects looking to raise funds from investors. But they're not without their limitations. For instance, DEXs are less scalable. It's not uncommon for ICOs and IEOs to be able to raise more than $1 billion. For DEXs, this is unheard of.

Because DeFi platforms come with a steep learning curve, a lack of knowledge regarding how crypto works may act as a barrier to entry for the average crypto trader. Countering this challenge efficiently would require funding education in DeFi.

Armed with the right information, nothing can shake an investor's confidence. The challenge will be in the ability of DEXs to raise funds for such ventures.

How do crypto IDOs work?

This section covers some of the more prominent features of DEXs that make IDOs work.

IDOs work because DEXs can provide immediate token liquidity. This is why DEXs tend to reward liquidity pool providers with handsome rewards. Liquidity allows DEXs to operate without any unexpected hiccups for their users.

To assist with trading, most projects provide liquidity to the DEX by allocating a cut of the funds. This approach has become standard practice. Many projects also adopt a proof-of-stake (PoS) consensus mechanism. The PoS consensus was designed to secure networks. But in this case, the mechanism is used mainly to discourage investors from selling too soon.

The PoS consensus involves having investors hold their capital in the supported token inside their wallet. In return, investors accrue rewards for their "stake" in the network.

Once the public sale goes live, the token value increases. Once the first sale takes place, the price will begin to move upward.

With a liquid exchange, the gas fees for executing a new smart contract are negligible because plenty of liquidity is provided for trading pairs. The smart contracts help to manage the asset token and liquidity pool. And unlike traditional fundraising models, IDOs can mint tokens instantly.

Moreover, any sound project can be qualified to raise funds. Circumventing the rigorous approval process has granted many projects access to retail investors. The same can be said about avoiding the high cost of initial exchange offerings (IEOs).

Lack of due process, however, has also resulted in the launch of many poor-quality projects. Such projects also include outright scams, where project owners fleece investor funds and vanish.

Investors don’t have to wait long periods for their desired tokens to be listed on an exchange. The listing typically occurs immediately upon completion of the IDO. This timing allows investors the opportunity to cash in on their investments much quicker compared to ICOs.

That's not to say that DEXs are all positive. Yes, they can be considered more trustworthy because they're trustless. (They don't need a human intermediary). But DEXs remain vulnerable to technical exploits. For example, news surrounding potential exploits where hackers have run away with investor funds is not uncommon.

How to launch an IDO

This section covers how users can launch their IDOs in a step-by-step fashion. To launch a successful IDO, users must also learn how to create a cryptocurrency. 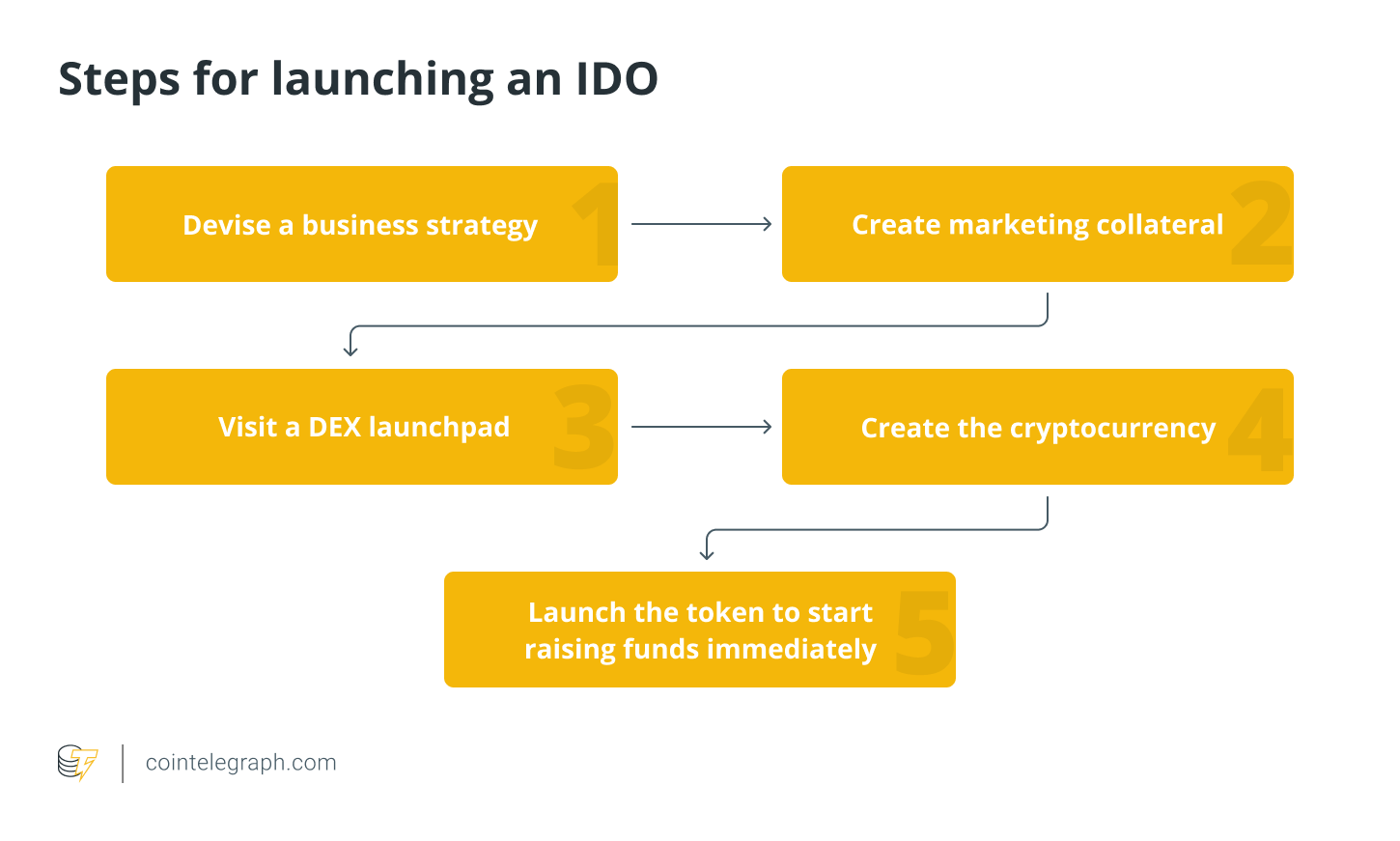 Plan the token offering to be released over a DEX by creating a strategy that makes sense. The strategy should include the challenge the project aims to resolve, fund allocation, which blockchain the project will run on, the general marketing strategy and how to spearhead the project post-IDO and maintain that momentum.

At the very least, marketing collateral for an IDO launch includes a website and a white paper. A well-branded website that is visually pleasing can do wonders for investor confidence.

A great website can help push the emotional levers for investors who have already bought into the project logically. The website can also make the project appear more professional. Many projects can struggle to establish a brand image, especially if they lack a website.

A great white paper, in contrast, enhances investors' experience with specificity and facts. Doing so moves the investor closer down the pipeline.

The purpose of a white paper is to sell by educating, which is why there is no hard-sell copy in the white paper, itself. Instead, the white paper presents statistical data, diagrams, tables and so on. The white paper uses facts to persuade the investor that the project is a worthwhile investment.

If the project meets the platform’s requirements (typically consensus and whitelisting), an IDO will be approved.

If users are wondering, "Can I launch my own cryptocurrency?" Here's the answer: Pretty much anyone with a little technical savvy and decent marketing skills can figure out how to launch a crypto coin.

The process for launching a cryptocurrency has become straightforward. Users can use an app like CoinTool here to get the app to do all the hard work. And exactly how long does it take to create a cryptocurrency? Users might be able to discern from CoinTool that it doesn’t take much time at all.

The difficulty isn’t in the token generation. Pretty much anyone can figure out how to make a cryptocurrency. The challenge is in convincing investors to put their money behind the project by discerning real-world value and utility.

Upon successful completion of the IDO and Token Generation Event (TGE), the DEX lists the token for trading. Listing occurs via an automated market maker (AMM) like Sushiswap or PancakeSwap.

For users wondering how to launch a crypto token, the following is a basic breakdown. The project team generates a token pool. A token pool is where investors pay for their tokens in advance.

The investors are to receive their tokens once the TGE takes place, shortly after the IDO. In this manner, instead of setting a fixed price, the issuer can hold an auction, thereby achieving a price driven by supply and demand.

Some projects may also incentivize investors to provide liquidity. Doing so can help the project to gain and sustain momentum. On the other side, by providing liquidity, users can earn even more tokens.

Differences and similarities between an ICO and an IDO

By now, readers should have a clear idea of what makes up an IDO, and why it's better than an ICO. This section looks at ICOs versus IDOs.

Unlike, say, initial public offerings and IEOs, neither the IDO nor ICO need the token issuers to pay fees to any intermediary. However, projects wishing to use the IDO or ICO fundraising model are 100% in charge of their marketing.

More experienced teams hire developers who can create the smart contract that is used to sell the tokens. Teams may also have to conduct their audits and ensure that everything is "on the books." In this manner, no legal or regulatory surprises will catch up to the project owners later.

Let's take a look at the main issues behind ICOs, and why IDOs can offer a better alternative. First, ICOs are highly centralized. They're also vulnerable to rug-pulling (where the team disappears with investor funds). Finally, they lack investor protections.

ICO tokens are often minted after the sale, and token minting takes place on the company’s website. This approach comes with significant costs. That's because the token issuer requires the token to be listed on one or more of the most prominent (hence, centralized) exchanges.

But what about IDOs?

Compared to ICOs, one main advantage presented by IDOs is that they avoid a premine altogether. Doing so can boost investor confidence, especially for those who rely on fundamental analysis in selecting their projects. This is because a high premine allocation can raise alarm bells for investors concerned with the emission rate of the token over the long term.

IDOs are also viewed as fairer in giving token access for investors. Specifically, IDO tokens are instantly tradable. Unlike ICOs, where lockup periods are commonplace, such lockups are impossible with IDOs.

ICOs often offer insiders and early investors favorable terms that aren’t available to retail investors. Such favorability is impossible with IDOs because smart contracts do not provide the ability to do so.

Also in contrast to ICOs, which involve an initial waiting period for liquidity and trading, IDOs provide immediate access. Another benefit of IDOs is that the issued token is listed immediately on the DEX where the IDO took place. 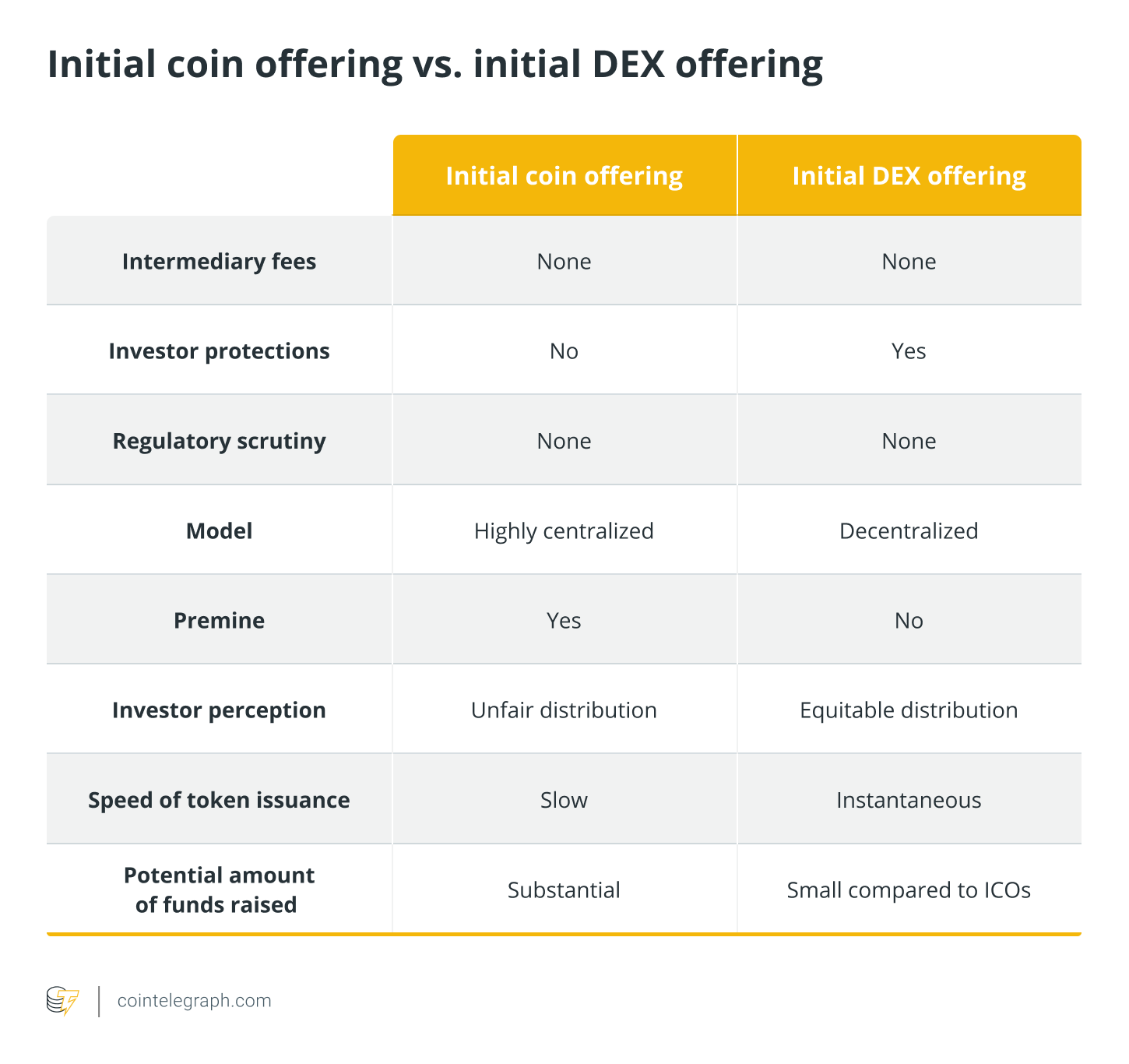 When raising funds for a project via an ICO, projects must first cover the exchange fees. Afterward, the team waits for the project to be approved by the exchange before the token is listed. With IDOs, projects don’t have to pay high fees. They also don’t require anyone’s permission because it's 100% decentralized.

So the project team isn't stuck waiting for an exchange to approve the project. Instead, influential community members can often take the lead and vet projects and tokens beforehand. This approach increases the project's reach without requiring any traditional advertising venues. Such support is usually given via social media platforms like Twitter, Discord and Telegram.

This isn’t to say IDOs aren't without their disadvantages. Bots have been used on several occasions to manipulate price action. Using these bots can grant a few people massive gains at the expense of other investors.

Moreover, hackers have been known to exploit bugs in smart contracts. It's not uncommon for hackers to vanish with investor funds before anyone is the wiser.

It's worth mentioning again that IDOs don't raise as much money as ICOs. Whereas it's not unheard of for an ICO project to surpass a valuation of more than $1 billion, such amounts are unheard of in IDOs.

The DeFi space has experienced rapid proliferation in recent years. However, even popular DEXs like Uniswap and PancakeSwap have struggled to provide liquidity compared to their centralized counterparts like Binance. DEXs also tend to come with a much steeper learning curve. Too steep a learning curve can intimidate potential investors, especially those who are new to crypto.

IDOs were created to solve many of the challenges posed by ICOs. With IDOs, teams can provide investors with an opportunity to get involved more directly with their favorite projects.

The lower barrier to entry presented by IDOs can also be considered an advantage. Many projects worthy of being listed would not have been able to gain access to capital via other fundraising methods had it not been for IDOs.

The perceived fairness of IDOs is why they can be considered a "great equalizer." IDOs allow small teams with innovative ideas to launch their projects and gain exposure.