A Glimpse Into XCurrency’s Mission to ‘Decentralize Everything’

XCurrency on its own is an exciting technology for many people (as the nearly 1,200 pages on its Bitcointalk.org thread demonstrate), so CT reached out to the team’s lead developer, Dan Metcalf, to get a better understanding what XCurrency was poised to create. 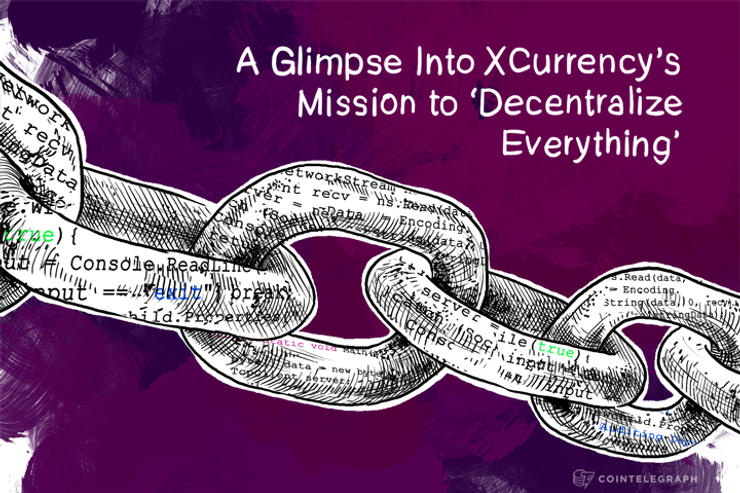 Last week, Cointelegraph received a press release from XCurrency that said its developers were working on architecture for a distributed, blockchain-based web that got my attention — primarily because the release announced XCurrency’s team will soon create the first such web 3.0 application.

XCurrency on its own is an exciting technology for many people (as the nearly 1,200 pages on its Bitcointalk.org thread demonstrate), so I reached out to the team’s lead developer, Dan Metcalf, to get a better understanding what XCurrency was poised to create.

XCurrency is both an altcoin and a platform on which applications can be built. One of its killer features is that XCurrency users can transact in total privacy along its blockchain because transaction data are broken into fragments, distributed to various nodes and mixed.

That means transactions become untraceable, or at least trying to trace them is cryptographically infeasible.

Anyone hosting a node is rewarded with coins, thus incentivizing network growth. And it’s this incentive structure that could allow a decentralized distribution network for content in general (i.e. all the stuff on the internet, not just the cryptocoins) to proliferate.

This decentralization could solve many problems the internet already has, XCurrency’s team argues:

“In its current state, [the internet] is insecure, vulnerable to hacking, and its core components are owned by states and global corporations whose interests do not necessarily align with those of users. What if, instead, the privacy of private information could be ensured by mathematics, while publicly viewable content was stored and served by nodes distributed around the globe, with no central point of failure or attack?”

The goals sound similar to MaidSafe’s SAFE Network, though the technology differs in that XCurrency uses a blockchain. Content in XCurrency’s model would be stored in a decentralized storage system that Metcalf referred to as XCFS, but development for that is a ways off at the moment (the team, Metcalf said, is currently working on XCurrency Rev2’s unspecified privacy feature).

“I envision XC in the future as a decentralized data center or decentralized infrastructure that offers similar functionality at a fraction of the cost,” he said.

Metcalf said that for the end user, little would change in a decentralized internet. It’s the backend that would look very different.

In fact, he was recently hired to build an app with this decentralized architecture, and this could provide an interesting test case for XC’s web 3.0 model.

The team at QiBuck asked Metcalf to build a blockchain-based content delivery system for advertising within that coin’s online wallet.

QiBuck Coin is a proof-of-baghold altcoin, which rewards any users holding a certain number of QiBuck Coins each month, with a dividend bonus generated through developments, investments, referrals and other revenue streams. This bonus system also includes directly rewarding users of the QiBuck wallet for viewing in-wallet advertising.

Metcalf’s described his content delivery system, which runs along XC’s Xnodes, as “similar to a decentralized Google Ads network, sending the ads over a secure API to the wallet.”

Anyone running an Xnode and anyone with a QiBuck wallet will be able to receive compensation, then. This project is still just in the pipeline, though, while XC’s team finishes up work on Rev2. But once work on web 3.0 apps begins, XC’s team thinks the implications for using this technology could be vast.

“XC is poised to deliver a general purpose content-delivery system that will support any kind of content and will serve traditional websites as well as next-generation distributed platforms.”