There were more bizarre aspects of the BTC-e and Mt. Gox hacking incident and the report of WizSecurity, which were not highlighted.

11293 Total views
199 Total shares
Own this piece of history

Yesterday, on July 27, the Bitcoin and cryptocurrency communities were stunned by the discovery of WizSecurity, which revealed that BTC-e and its owner Alexander Vinnick were directly involved in the Mt. Gox theft and security breach that led to the loss of around $2.2 bln worth of Bitcoin in losses. 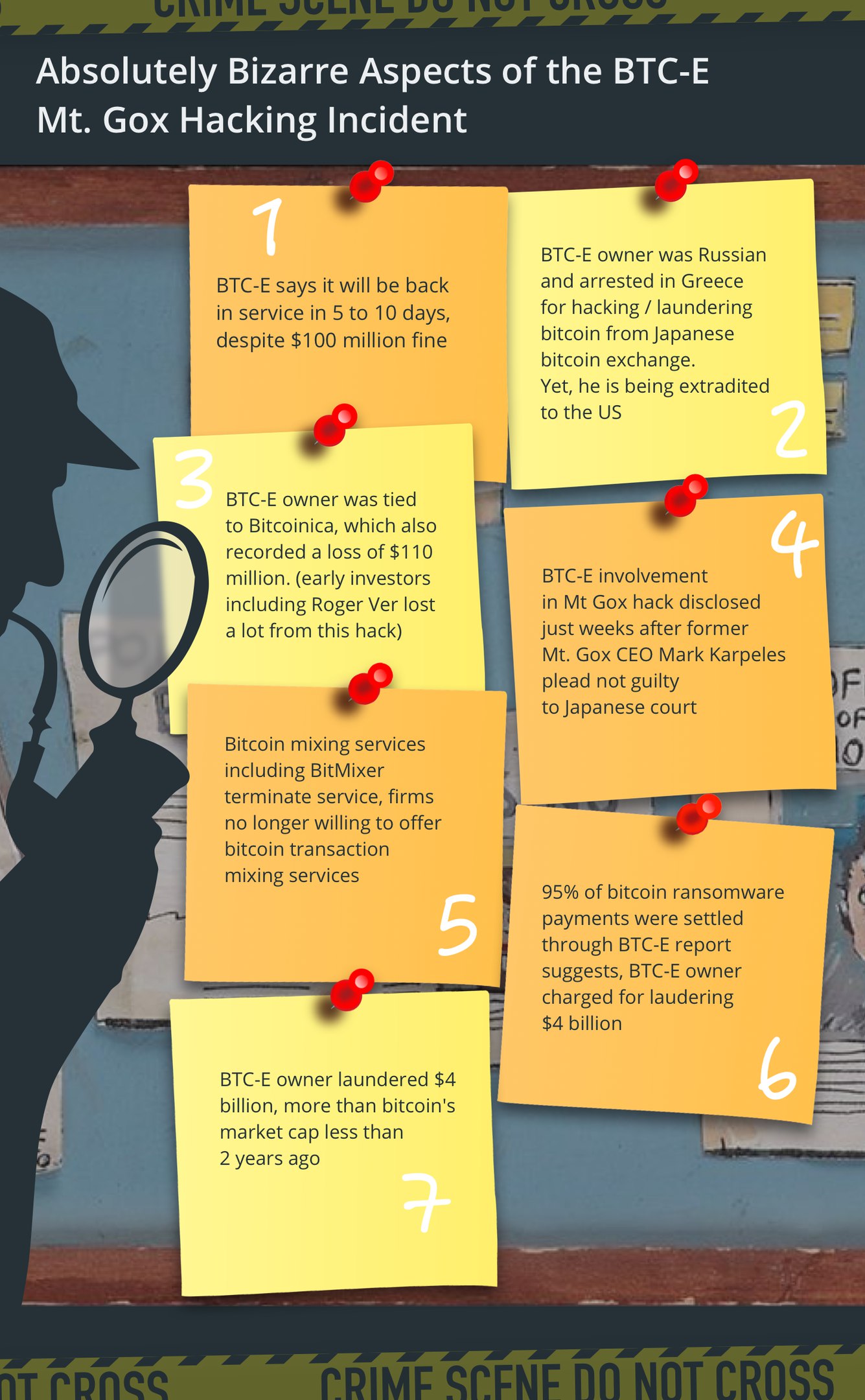 As Cointelegraph previously reported, Vinnick played a key role in the hacking incident of Mt. Gox, laundering $2.2 bln worth of Bitcoin stolen from Mt. Gox’s Wallet.dat file. Apart from that, Greek officials and authorities charged Vinnick for laundering approximately $4 bln in Bitcoin, for ransomware distributors and hackers.

The US law enforcement and Department of Justice along with the US Department of the Treasury Financial Crimes Enforcement Network (FinCEN), which asked for the extradition of Vinnick to the US, officially fined BTC-e $110 mln for facilitating ransomware and dark net drug sales.

“We will hold accountable foreign-located money transmitters, including virtual currency exchangers, that do business in the US when they willfully violate US anti-money laundering laws. This action should be a strong deterrent to anyone who thinks that they can facilitate ransomware, dark net drug sales, or conduct other illicit activity using encrypted virtual currency.”

The mere fact that BTC-e, the oldest and one of the most trusted Bitcoin exchanges in the industry, was heavily and directly involved in the theft of Mt. Gox Bitcoin and user funds came as a shock to the Bitcoin industry and community.

However, there were more bizarre aspects of the incident and the report of WizSecurity, which were not highlighted.

More to that, despite being fined nearly the same amount of Bitcoin lost and stolen during the BItcoinica hacked, BTC-e representatives announced on their social media platforms that the exchange will be back in service in five to 10 days, which in accordance with the report from the FinCEN, seems highly unlikely. It is also important to note that BTC-e announced its 10-day recovery plan prior to the announcement of FinCEN and the $110 mln penalty.

Perhaps most interestingly and importantly, BTC-e involvement in the Mt. Gox hack was revealed only two weeks after Mark Karpeles, the former CEO of the now-defunct Bitcoin exchange Mt. Gox, plead not guilty to the Japanese court in a hearing based on charges of data manipulation and embezzlement.

In total, the amount of Bitcoin laundered through BTC-e and Vinnick using his personal Bitcoin mixing tool was larger than Bitcoin’s market cap less than two years ago, in May of 2015.