Bay BitHack is more than just a hackathon; it’s a statement of the recent strides that the nascent Bitcoin has made in its evolution towards an understood legitimacy amongst the tech crowd and Bitcoin community. 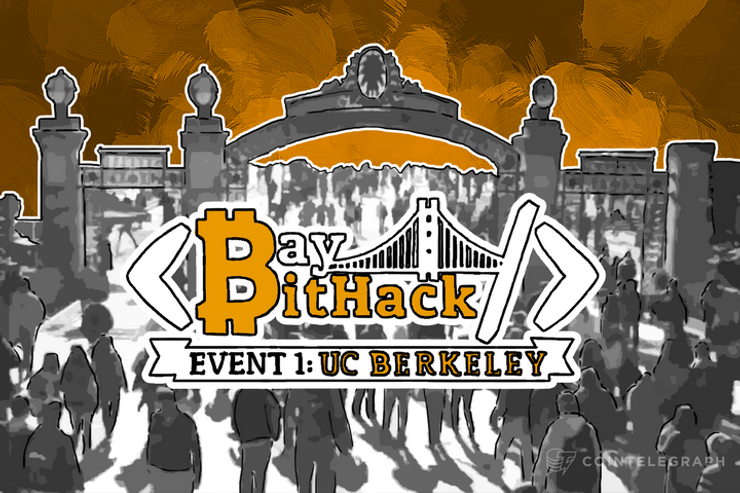 Bay BitHack is more than just a hackathon; it’s a statement of the recent strides that the nascent Bitcoin has made in its evolution towards an understood legitimacy amongst the tech crowd and Bitcoin community.

Max Wilson, the director of Bay BitHack, asked himself:

Where do we fit in the bigger picture of hackathon culture; the intersection of this tribe and the growing Bitcoin developer community?

He found the answer by creating an event with his team, the Bitcoin Association of Berkeley, who have been just as instrumental in shaping Bay BitHack as Max, to build the future by building new frameworks for thought with a hackathon featuring all-star sponsors ranging from Andreessen Horowitz and Coinbase to, yours truly, Cointelegraph. Accordring to Max:

“Cryptocurrency and the blockchain are really beginning to make a splash in the hackathon scene. This year, hackathons centered around Bitcoin and related tech have sprung up in Silicon Valley, Toronto, France, Berlin, Israel, and the Philippines. The student-run hack.uva was sponsored by Dogecoin back in April. A lot of these events were “firsts” in their respective countries and categories. Cryptocurrency developers are finally leveraging the incredible innovation and networks that arise from hackathon culture.

Bay BitHack is also a ‘first’: it is the first hackathon held on a college campus, targeted at students, and exclusively oriented around Bitcoin. Not only that, it’s one of the biggest Bitcoin hackathons with an ensemble of over 140 hackers all housed under one roof. I think it’s outstanding: 140 talented student hackers from top schools in the Bay devoting 24 hours to hack on Bitcoin projects? A year ago, Bitcoin was practically fringe science. At long last, we’re hoping to break into the mainstream on college campuses.”

Bitcoin Association of Berkeley meetups are used to bring guest speakers from the Bitcoin sphere onto the Berkeley campus. In the last month, we have hosted the BitAccess team, a Bitcoin ATM manufacturer who is working closely with us to bring the first Bitcoin ATM unit to the East Bay within the next month. We were also visited by Koinify, who discussed potential opportunities regarding crowdsourced, cryptofunded projects at UC Berkeley this semester. Finally, we had snapCard over, who introduced an exciting new campaign to deploy Bitcoin in businesses throughout the Bay Area and is looking to get students at UC Berkeley involved.

Bitcoin Association of Berkeley members have already gone on to intern at Coinbase, work at Stellar, and receive funding from BoostVC. Berkeley really is turning out to be a nexus for Bitcoin-related activity in the East Bay, and it is all starting right here in the depths of the D-Lab on Tuesday nights.

On a still Tuesday evening this summer, we congregated in UC Berkeley’s D-Lab for our bi-monthly Bitcoin meetup. In the past, the Bitcoin Association of Berkeley’s meetings were an opportunity for us to blow off steam from our real lives as students and faculty by talking crypto over cold beer. However, during this evening, our conversation drifted away from market news and price discussion to the topic of the Bitcoin ecosystem in Berkeley.

A quick scan of the directory indicated there were only two businesses in the entire city that accepted Bitcoin! We began scheming ways to get people on the UC Berkeley campus excited about Bitcoin and decided that we were going to organize and host a hackathon dedicated exclusively to the development of Bitcoin applications and services.

Much like the alliance between France and Germany, there is no antitrust between ideas amongst the collegiate minds in California, who work to encourage collaborative competition across states and within localized events. Max Wilson’s original thought entailed a gathering of 80 people in the computer science lounge until he was introduced to Daniel Bloch and Jeremy Gardner of the College Cryptocurrency Network (CCN).

“They loved the idea, and before I knew what was happening, they had connected the Bitcoin group here at Berkeley to four other local CCN chapters in the Bay Area.  The idea of a casual Bitcoin hackathon quickly inflated into a Bay Area-wide event as crypto-enthusiasts from around the region jumped into the fray. We didn’t have to create the demand for this kind of event; it was already there, and once the floor plan was laid out, the initiative quickly took on a life of its own. There is a huge lack in the volume of new developers. We have a serious scale problem and education can change the amount of talent working for a crypto future. We hope to create a steady stream of new developers for Bitcoin.”

Bay BitHack will gather 140 hackers and developers in the Bay Area under one roof where they can commit to building for the idea of Bitcoin. The event has oversold and Max is trying to find a way to create room to accommodate the influx of encouraged talent to thrive, create and build.
Max explains:

“We have realized there is a huge divide between the number of ideas in Bitcoin/the Blockchain and the number of highly skilled and inspired developers. Education is the key to unlock potential, and we are happy to hack into the enormous untapped resource of college students. We’re very excited to see how this turns out.

The Bay BitHack will be a circuit of Bitcoin hackathons occurring at universities around the Bay Area, and the first event will be held at UC Berkeley on November 1 and 2, 2014. For 24 hours, student hackers and builders will dive into the depths of crypto-usage, many for the first time, to push the Bitcoin protocol to new heights. It is our belief that by targeting the university level first, we will transform the Bay Area into a vibrant Bitcoin ecosystem for not only startups, but for merchants and consumers as well.”

In the future, the Bitcoin Association of Berkeley  and the College Crypto Network plan to create iterations at other colleges around the nation and across the globe.

“We are already in talks about doing further iterations of Bay BitHack at Stanford University and Plug and Play Bitcoin, down in Sunnyvale, California, next April or May,” said Max. “ On that note, we have already had an overwhelming response from sponsors eager to make these types of events happen. The excitement for frequent collegiate Bitcoin hackathons is very apparent from both students and companies in the space, so there’s nothing holding us back.”

“Because we had the intention of turning Bay BitHack into a circuit of hackathons around the Bay Area from the get go, we created a framework that is easily replicable at other college campuses.  What this means is we now have a collegiate Bitcoin hackathon prototype which anyone can copy and paste to bring Bitcoin and blockchain awareness to their own campus.

“The only thing students would need to do is track down sponsors, and with the assistance of the College Cryptocurrency Network, that’s easy. Bay BitHack will be a success if and only if the gene of this hackathon is replicated elsewhere to educate young and inspired hackers to begin developing for the Bitcoin protocol.”

Be sure to read up on the BayBitHack, attend the first event on November 1-2 at UC Berkeley and keep a close watch for these events to pop up around the world.