Cathy Reisenwitz is an editor at Young Voices and chief blogger at Sex and the State. We had a chance to speak with Reisenwitz this week about her writing, her advocacy and what role she sees crypto-currencies playing in addressing social problems. 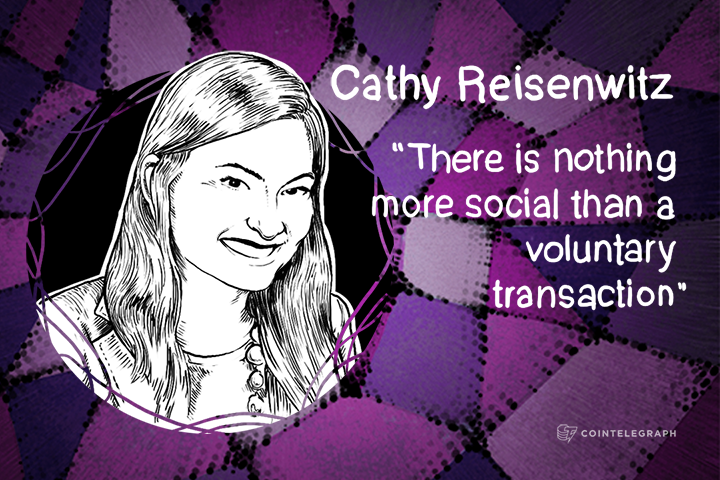 The idea that Bitcoin and crypto-currency is somehow unrelated to the social would have to rest upon the contention that concerns like access to credit, global poverty and oppressive regimes are not social issues. On the contrary, there is nothing more social than a voluntarily transaction. And giving more people worldwide access to mutually beneficial exchange is one of the most important social issues a system could take on.

Cathy Reisenwitz, editor at Young Voices and chief blogger at Sex and the State, wrote the above lines in a piece for Bitcoin Magazine in February. Her writing and political commentary take on a holistic view in which Bitcoin and crypto-currencies in general serve as but one remedy for social ills brought on by state intrusion.

We had a chance to speak with Reisenwitz this week about her writing, her advocacy and what role she sees crypto-currencies playing in addressing social problems.

Cointelegraph: You have a lot of interesting ideas and views that likely will overlap with those of many of our readers’, but I first wanted to know about your work at Young Advocates. What kind of difficulties do you and your advocates face when asked to speak on a topic? Is there an assumption that younger advocates must fill some kind of voice-of-a-generation role? Do others try to co-opt your own thoughts to fit whatever their agendas are? Cathy Reisenwitz: Young Voices has been really astoundingly successful. We’ve found that our advocates are really talented and have little trouble getting their writing placed in some big publications, including Forbes and the Chicago Tribune. Our work on Bitcoin spans Bitcoin-focused magazines and websites to places like Vice Motherboard. We’ve been quoted everywhere from Wired to the New York Times. And we’ve been on Fox News and Fox Business, as well as Al-Jazeera America and RT. We even brought Bitcoin to CPAC this year.

The main difficulty for us is just that since we’re all under 30, and only two out of 50 of us do this full-time, we’re just not very experienced. That goes for our speaking, our writing, our interview, our television appearances and our in-depth knowledge in our subject areas. We do speak for our generation, Millennials, while also representing our own views. None of us agree on everything.

It’s a challenge to kick our abilities up a notch in a short period of time so we can more consistently break into bigger and bigger outlets.

Getting co-opted isn’t necessarily the challenge, but tailoring our message to our audience is. We’re neither left nor right, but many of the outlets we work with have a slant, so we have to fit what we have to say within it.

CT: Your writing, on Sex and the State and elsewhere, touches on social issues, sexual discrimination, liberty, free markets and Bitcoin all at various times. Is there a point at which all of these themes sort of converge or overlap?

CT: You mentioned on your blog that you are working on a book that deals with free markets and feminism. Can you give us more insight into the ideas you will be exploring?

CR: First, I want to explore how feminist issues are nearly always more nuanced than the left and the right make them out to be. A good example is the gender wage gap. The left claims it results mostly or only from gender-based discrimination. The data indicates that’s not actually the case, once you correct for choices like hours worked, education, experience, etc. The right claims the gap is purely the result of women’s choices. But that’s not really correct, either.

There are tons and tons of subtle and less-subtle factors influencing the decisions women make which lead them to make less money. Some of these include cultural factors, like gendered expectations around childcare, eldercare and housework. Some of these are government-created problems, like the fact that immigration restrictions and regulations make childcare more expensive than college tuition in most states, or the fact that at the lower end of the income scale, female-dominated professions are more likely to require a license.

I want to demonstrate how the government itself is the war on women, and how the market can benefit everyone, women included.

CT: In that same post, which really is a great read, you talked about self-awareness. At the end, it almost sounds as if you present yourself with only two choices: Remain static, or evolve and hate your past selves. Is that an accurate interpretation? I ask particularly because, in three years, all of us following something as ever-changing as crypto-currencies are going to have to laugh at some of our own predictions and ideas, right?

CR: Haha, it’s true. I think it’s possible, and if so, preferable, to give my former self a break. To look at where I came from and that culture and those expectations and see that I was doing the best I could where I was. Hate the sin, love the sinner, kinda thing. But it’s kind of humiliating to think about some of the things I used to believe and do. So getting over that and being sympathetic, in a way, to who I was is difficult.

But I think it’s possible. Potentially.

CT: What is a project or something else going on in the crypto-currency space that you are excited about?

CR: Everything! Dark Wallet is the bees knees. I freaking hate money laundering laws, and so doing an end run around them appeals to me a lot.

Sean’s Outpost is showing what the Bitcoin community is capable of regarding charity.

I’m excited about the merchants coming on board and accepting crypto.

And I’m excited about lawmakers like Rep. Mick Mulvaney, who are reaching out to the community to try to regulate in a smart, sane way.
Related News
Behind Ripple’s Regulation Call: ‘Do Not Paint Us With a Broad Brush’
New Platform Lets Users Trade Crypto and Gold in Personal IRA
<div is="sidebar" :sidebar-data="{"promoButtonsI18n":{"crypto-button":{"url":"crypto.btn.sidebar.url","label":"Get Crypto At True Cost\n","text":"Cryptoassets are complex instruments and investments carry a high risk of losing value. You should educate yourself in how crypto-markets work before making any investments. Always invest responsibly and be prepared for the risks associated with investing in or using cryptoassets. This promotion cannot be considered investment advice."},"etoro-button":{"url":"https:\/\/ad.doubleclick.net\/ddm\/clk\/437480595;240556498;x","label":"Try Etoro","text":"Trade on the world’s leading social trading platform (Highly volatile investment product. Your capital is at risk)"},"hitbtc-button":{"url":"https:\/\/hitbtc.com\/?ref_id=5cba0be404aa3","label":"BEST LIQUIDITY ON HITBTC","text":"Note that all trading strategies are to be used at your own risk. Before trading, we recommend to make sure that you have a clear understanding of cryptocurrencies and how they are traded."},"changelly-button":{"url":"https:\/\/changelly.com?utm_source=cointelegraph&utm_medium=referral&utm_campaign=changellyctengbutton&ref_id=le9ssi8dgmskmqu0","label":"BEST RATES ON CHANGELLY","text":"This is to note that you should realize all crypto trading risks. Please make sure that you understand how crypto exchange service works."},"nexo-button":{"url":"https:\/\/nexo.io\/?utm_source=cointelegraph&utm_medium=fixed&utm_term=content&utm_content=crypto_banking_acco