DeFi Earnings Fell 42% in Q2 Even as Token Prices Surged

The DeFi industry may be booming this year, but a new report shows earnings have fallen despite a huge surge in token prices.

The second quarter token report from Bankless, a DeFi focused newsletter from Mythos Capital founder, Ryan Sean Adams, revealed that earnings fell by 42% in the second quarter, from $5.5 million in Q1 down to $3.9 million in Q2. The findings are somewhat surprising since most DeFi related tokens have been on fire recently. 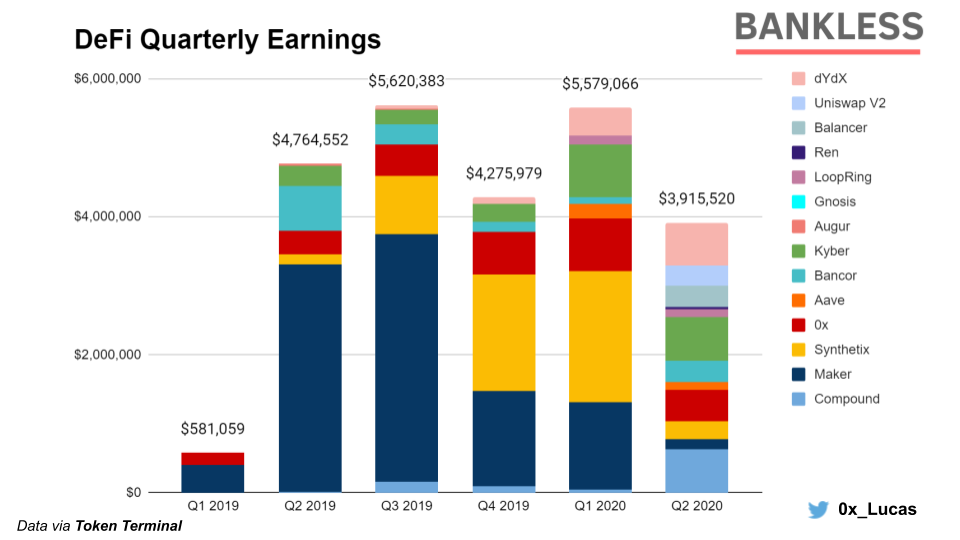 One big factor was MakerDAO shifting the stability fee (SF) down to 0% following the mid-March crypto crash. The Dai Savings Rate (DSR), which was previously as high as 8%, also fell to zero as Maker battled to keep its dollar peg at the right place. Dai traded as high as $1.08 during the crash so the DSR was dropped to encourage borrowers to mint more Dai to sell into the market.

The move saw earnings for Maker fall from over $1.2 million in the first quarter down to around $150k for the second. The DSR has never recovered and remains at 0% today according to the Oasis DeFi savings app.

Synthetix was another cause of declining revenues in the sector — due to over reporting earnings in Q1. The report said the Australian based project, “was suffering from front-running attacks that disproportionately reported earnings for the derivatives protocol.”

The platform remedied the issue and reported around $267,000 in quarterly earnings, which is an order of magnitude lower than the $2 million reported for Q1.

According to the chart, MakerDAO and Synthetix dominated over half of all revenue reported for the DeFi sector between January and March this year. The balance has changed significantly for Q2 with the likes of Compound, Kyber, dYdX, and 0x taking a much larger slice.

Kyber was the highest earner for the period with $634,000 generated over the three months, while Compound came in a close second with just under $625,000. DeFi platform dYdX earnt  around $624,000 while the 0x protocol made $445,000 in quarterly revenue for holders of its native token, ZRX.

Another notable change in the second quarter has been the entrance of newcomers including Uniswap V2 which was launched in May, Balancer, Ren, Gnosis, and Loopring which all had protocol upgrades, or token launches during the period.

Despite DeFi’s earnings decline, token performance has been impressive with most of them outpacing their traditional cryptocurrency brethren. DeFi users have also increased during the period thanks in part to the liquidity farming frenzy.