Op-Ed: No, Bitcoin Was Not Created By The CIA

Claims of evidence that bitcoin was created by the CIA or NSA surfaced by a supposed hacktivist group calling itself CIAproject. But should we take them seriously? 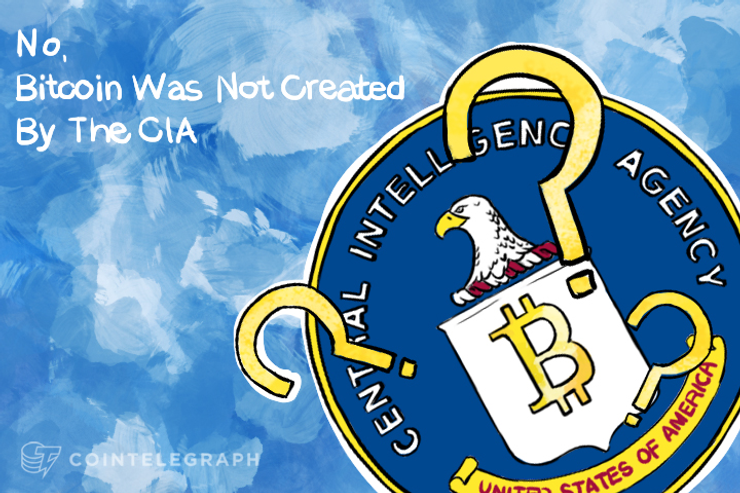 An unfortunate reality of the internet is that anyone can make any claim and if it is outrageous or controversial enough, they will get attention.

Recently, a site appeared on the Internet claiming to be a group of “hacktivists” called CIAproject.org, which feels the need to repeatedly remind us that they are “not the CIA”  that claims Bitcoin was created by the CIA or the NSA. Their claims were then reported on as something that might have some validity by the ibtimes and another bitcoin outlet.

While I am careful about using the phrase conspiracy theory, since that is often used to discredit legitimate theories of conspiracies (see NSA spying as one example of a “conspiracy theory” that ended up being true, COINTELPRO is another). However, in this case, the negative connotation behind the phrase seems appropriate.

I should note that I have no issues with true hacktivists, so long as they present the evidence obtained during their deeds. While some are misguided, I see the majority of them as virtual Robin Hoods, taking a bite out of the power structure in a way they are unable to respond to. The problem is that this "hacktivist" group has done very little actual hacking, and is posting wild claims without any real evidence.

What Evidence Do They Have?

CIAproject's “evidence” consists of four connections, each of which is more tenuous than the one before. First, they point to Satoshi Nakamoto's name. As they state, the name roughly translates to Central Intelligence. But as ibtimes points out, it is also a fairly common Japanese name.

That flimsy piece of evidence is the theory's crown jewel, but there is no evidence that the pseudonym chosen by Satoshi sharing similarities with the CIA is anything but a coincidence.

The second piece of evidence brought by the CIAproject is Satoshi never revealed anything that would reveal his identity. This, they say, is evidence of intelligence training. However, it ignores the fact that thousands (if not millions) of people manage to remain anonymous online everyday. The actual hacktivist group Syrian Electronic Army has pissed off enough powerful people that billionaires would love to find out who they are and shut them down. They have been unable to. It seems unlikely that the Syrian Electronic Army is also a CIA puppet group.

The group also claims that since Gavin Anderson spoke to Satoshi for years but never met him in person or talked to him on the phone implies that he is actually “they” and that they are an intelligence community. The only thing I will say to this is that I have had internet friends that I talked to for years, on message boards and elsewhere, without ever meeting or