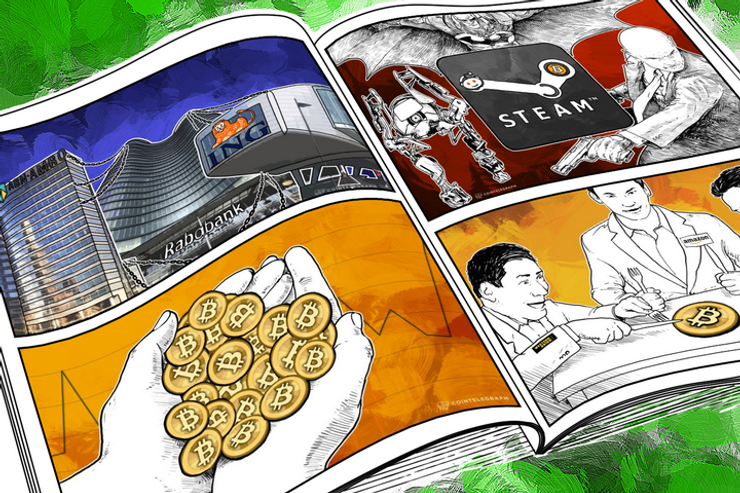 This story’s headline belongs in a time capsule, to be rediscovered in 10 or 20 years. On Tuesday, Diana Ngo reported that ING and other Dutch banks were exploring the use of blockchains.

“Mark Buitenhek of ING told the Dutch media outlet RTL Nieuws that the current payment system has always operated through banks and central banks, which monitor all commands and ensure that operations run smoothly.

“This method has been the same for 30 years, stated Buitenhek. ‘We have spent the last twenty years operating on what we had put down in the seventies and eighties.’"

Thanks in large part to Bitcoin Giving Tuesday, the Bitcoin network crossed the 100,000-transaction threshold twice this past week.

3. New Bot Allows Redditors to Tip Each Other in Video Games

On Monday, Amanda B. Johnson reported about a Reddit bot that operates much like ChangeTip, but the tip’s recipient receives a game rather than 1000 bits or so.

“Reddit user The_Hox announced that his website Eternal Summer Sale has launched a bot which allows users to tip one another, only instead of tipping cryptocurrency, they’re tipping complete games on the popular platform Steam.

“The_Hox kicked off his highly-upvoted post by giving away copies of a game called Hitman: Codename 47.”

4. Some Interesting Companies Commented on the BitLicense Proposal

On Thursday, William Suberg reported on some of the companies that sent comments to New York’s Benjamin Lawsky regarding his proposed BitLicenses program. The list of companies—with comments posted in full—includes Amazon and Western Union.

“They reveal Western Union calling for all Bitcoin ATM installations to be ratified by Benjamin Lawsky himself, as well as for the company itself to be exempt from the regulations even if it were to deal in digital currencies in future.