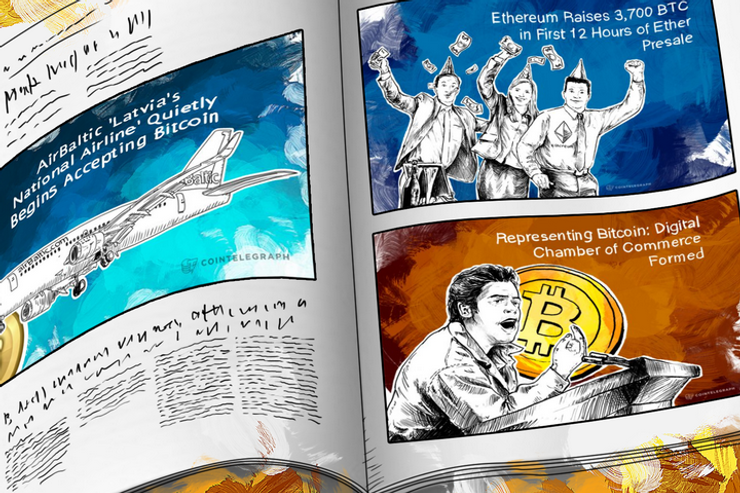 “This marks the first time that an Airline itself, rather than a third party entity, has accepted Bitcoin payments. Perhaps more significant, since AirBaltic is owned by the government of Latvia, this means the government is accepting Bitcoin in a roundabout way, albeit through an independently operated company.”

2. Ethereum Launches Presale, Raises More Than $2 Million in a Half Day

We reported Wednesday that after nearly six months of waiting, Ethereum finally began the presale of its coin, ETH. Within 12 hours, it had sold 3700 BTC worth of the coin. By Friday morning, that number had doubled.

3. A Digital Chamber of Commerce Emerges

Carlo Caraluzzo reported on Sunday that the formation of Digital Chamber of Commerce had been announced at the North American Bitcoin Conference in Chicago.

“It is registered as a 501(c)(6) nonprofit, which gives the group the legal right to act as a lobbyist for the Bitcoin industry and the effort is being headed up by Perianne Boring, a former Congressional Staffer, and journalist with wide connections in Washington. It has already received backing from RRE Ventures and Tally Capital.”

Bogdan Ulm reported Wednesday that the Swedish government solicited the EU for clarification on how to apply VAT (value-added taxes) to cryptocurrencies.

“The ruling is meant to determine whether or not Bitcoin is truly a currency, in which case it should be excused from VAT; however, if the cryptocurrency is a payment mode, it should be subjected to a value-added tax. The distinction is extremely important because if cryptocurrencies are labeled as an exchange form, then may face a 21% tax for making use of peercoins, bitcoins, and dogecoins.”

Draft legislation in Quito that would create a national digital currency while forbidding competition awaits the signature of President Rafael Correa. The group BitcoinEcuador drafted an open letter to make the case that the new monetary code fails to respect the privacy of individual finance and fails to embrace the potential of decentralized cryptocurrencies. The letter reads:

“Creating an electronic currency brings unquestionable benefits such as reduced costs for the system and user convenience; however, inadequate technical implementation may severely affect user privacy.”