Nonfungible tokens: How to get started using NFTs NFTs stand for nonfungible tokens, which have rapidly become ubiquitous in the world of crypto. NFTs are non-replicable digital assets. But why is this feature of non-replicability prompting so many people who are serious about blockchain technology and cryptocurrencies to buy NFTs?

Is an NFT just “an expensive JPEG,” like many of its more skeptical observers have labeled it? If so, why would people be willing to pay hundreds of thousands of dollars for a digital item, like the pixelated image of a rock?

This article answers what are NFTs and what gives them their value. Afterward, users will learn how to create an NFT, how to buy NFTs on their own, and how these tokens are acting as a catalyst for change.

What is NFT or nonfungible token?

Keeping this in mind, the opposite property is nonfungibility. Compared to currency, which is interchangeable, nonfungible tokens are unique and cannot be replicated. An analogous example is Bitcoin (BTC). If users were able to copy their Bitcoin over and over again, its value would be rendered meaningless.

Here’s a real-world example. In the real world, there is only one Mona Lisa. There are many copies, but there is only one real version, and it’s sitting in the Louvre Museum in Paris, France. Experts have undertaken a lengthy and painstaking verification process to ensure that the Mona Lisa on display is the real one.

But there are two issues in the Mona Lisa example:

On the contrary, in terms of an NFT, users can consider the Mona Lisa in digital format. Algorithmically, there can be only one copy. There is no other copy. The original (and its owner) are easily and instantaneously verifiable with a unique identifier on the blockchain. Reliance on a third party for verification is no longer necessary, cutting down on costs across time and money.

It’s also much easier to verify proof of authenticity and ownership on the blockchain than it is in real life. So, why do real-world artworks, which can be copied and are difficult to verify, carry so much intrinsic value compared to NFTs?

Below are the most popular NFT examples or applications of NFTs. Reviewing them should give the reader an overview of the value and potential of NFTs.

NFTs as digital art: The most obvious use of NFTs is in collecting digital art. So, what is crypto art? Crypto art is what the average person refers to as “expensive JPEGs.” NFTs are released in limited-edition sets, with a standard of 10,000 pieces per collection. One of the first NFT collections that launched was Crypto Punks. This collection also launched with 10,000 uniquely minted tokens as a set.

NFTs for profiles/avatars: Many NFT crypto art pieces can double as profile photos (PFP). In the real world, people buy physical objects to showcase their identities. These include expensive shoes, getting piercings and tattoos, and so on. Everyone wants to showcase their uniqueness, what they’re into, and how they’re different from the rest.

On a larger scale, affluent people flaunt their wealth every day. The rich buy luxury goods like limited-edition cars, custom watches from recognizable name brands, and so on. These NFT art pieces function much the same way. Since a Crypto Punk can be auctioned off for several millions of dollars, to be able to flaunt a Crypto Punk as a profile photo is to flash one’s swag.

NFTs as collectibles: Collectible NFTs are what entrepreneur Gary Vaynerchuk talks about day in, day out. Gary has been collecting sports cards since he was a kid and seems to have recognized early the future impact of NFTs. He frequently mentions “NBA Top Shot,” which are collectible NFTs of basketball players.

Sure, in real life, limited, rare and unique basketball card sets are in demand, and they can get quite pricey. And to the right fan, the price is but a small stepping stone to owning something unique. That’s because, for the collector, these basketball cards are a tangible physical asset.

(On a side note, this brings into question the value of tangibility. Will the importance of tangibility decrease over time? NFTs are prompting asset owners and investors to ask such questions.)

Let’s take the real basketball cards and apply them to the blockchain. These cards then become unique NFTs for fans to collect, show off and prove ownership instantly.

Marvel has also entered the foray. Recognizing the potential of NFTs, they’ve introduced comics and figurines on the blockchain.

NFTs for gaming: NFTs are revolutionizing video games too, and will continue to do so, albeit on a much larger scale. The most obvious beneficiaries would be games that already have a marketplace. Blizzard’s World of Warcraft, for example, rewards players with unique and rare items that can be traded (and many players do with fiat money).

The first popular blockchain game was Axie Infinity. Users can think of it as a Pokemon-meets-Tamagotchi roleplaying game. Players get started by purchasing their “axies,” creatures that the player will use to fight against other creatures in the game. The game is both PvE and PvP. This means that players get paid whenever they defeat AI creatures, as well as other players.

Each creature possesses traits that are unique or rare to them. Players can also take their axies and breed them. This way, they can own more axies, each with its unique characteristics.

NFTs for music: Music NFTs aren’t limited to owning authentic music from an artist. These types of NFTs can serve many functions. For instance, music NFTs can showcase membership to an exclusive fan club, or they could even represent tickets to unlock special Livestream concerts.

More importantly, music NFTs allow artists to bypass third parties like music studios and streaming apps. Doing so grants artists direct access to their fanbase, as well as fair payment. Music NFTs also allow artists to collect royalties from every person that has ever purchased the NFT. This characteristic empowers artists directly, with royalties guaranteed from future sales.

Benefits of owning an NFT

The property of originality cannot be overstated for NFTs. This characteristic has massive implications for the digital world as a whole. To be able to own a unique or rare item, and then to be able to provide proof of ownership instantly, is a feature that is unique to blockchain technology.

But originality is only the starting point of the potential benefits. It’s important to remember that this characteristic is inherent in the technology itself. The secondary benefits are a result of what the creators have determined can best serve the NFT owners.

NFT collections have birthed massive communities with tangible secondary benefits. An obvious example is Gambling Apes. These digital images, of which only 10,000 have been minted (as is standard), are more than nonfungible. NFTs carry utility, even in the real world.

With the proceeds from the NFT sales, the team behind Gambling Apes is buying a piece of digital real estate on Decentraland. On the property, they plan to build a casino. And for owners of a Gambling Ape, exclusive perks are available.

Some of the notable real-value perks include:

As mentioned, the utility of an NFT depends highly on the creative imagination of its team and community. More interesting applications of NFTs will emerge with the development of blockchain technology.

The monetary value of NFTs

It’s hard to put a price on NFTs, just like it’s hard to pin down a monetary value on a baseball card at the bat of an eye. Arguing about the intrinsic value of something is difficult, even in the real world.

Let’s take it a step further. Esports gaming events are being held on the blockchain. It’s news to no one that esports has one of the largest community followings in the world. Let’s say that one of them happens to be a major basketball event. Both teams are exhausted, the scores even, and it’s the last play. One player throws an impossible three-point shooter—and makes the shot.

How much would the winning basketball be worth for a fan who attended the live event, who recognizes the significance of the last shot? In real life, what would the basketball as a unique item be worth? How much value would it have virtually? How much money would a fan be willing to pay to own that basketball NFT? (Is it still only an expensive JPEG of a ball? Or does it hold greater meaning now?)

The most expensive NFT collection is, as mentioned, Crypto Punks. This is because they first came out in 2017 and are arguably the first popular NFT collection. At the time of minting, these digital artworks were being given away for free. All a user needed to do was connect their digital wallet via the website and cover the Ether (ETH) gas fees to own one. Today, a Crypto Punk with rare or unique characteristics can sell for millions of dollars.

This section covers how to create NFT art or other collectibles. If a user wants to own an NFT at the price it’s first minted, then they need to get in early and keep abreast of NFT projects. 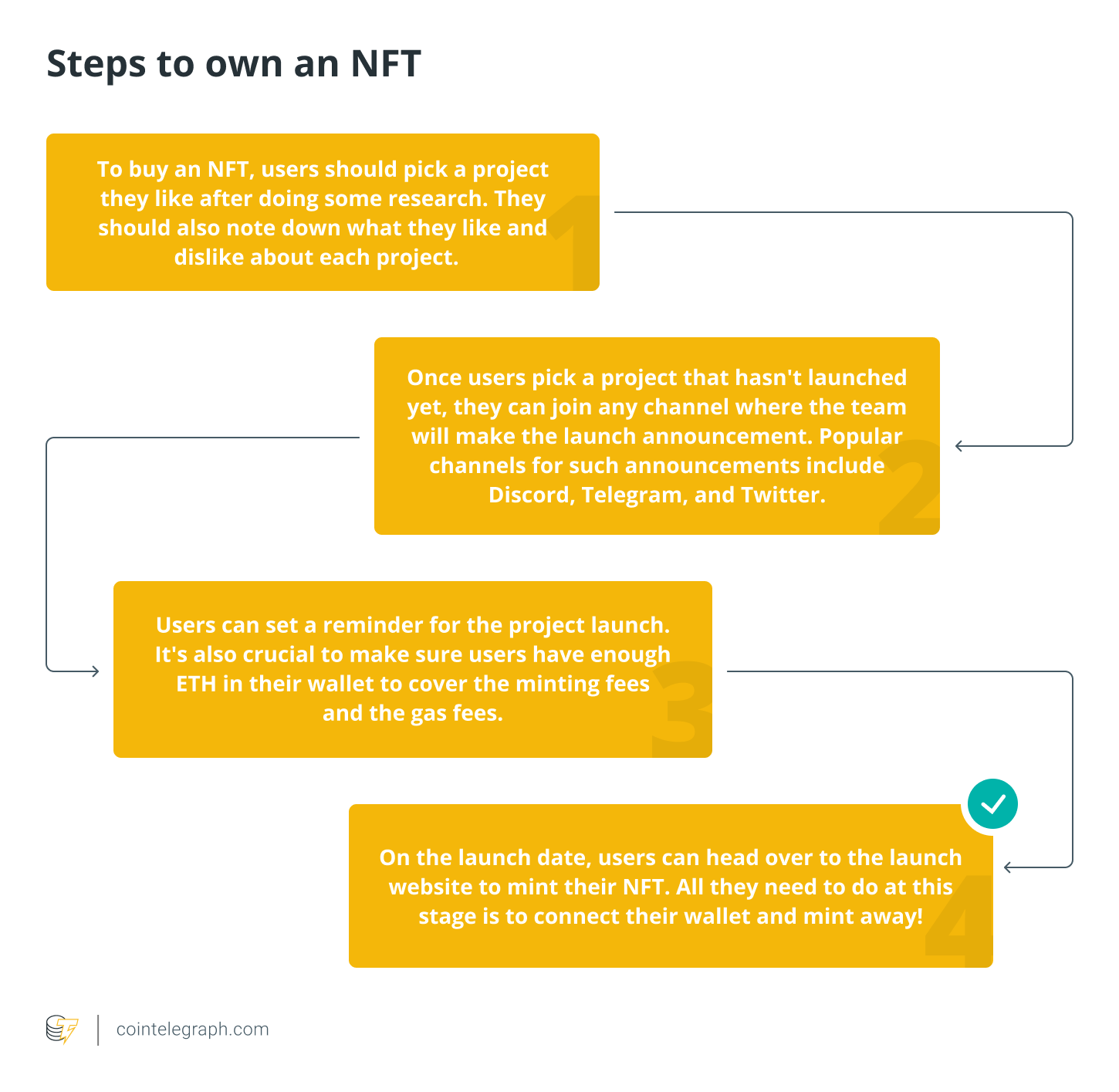 Auction houses are a secondary marketplace. Users who already own NFTs and wish to sell them at a higher price than they purchased them for can auction them off. The floor prices, which are the absolute lowest price to buy an NFT from a collection, can be significantly higher compared to buying an NFT minted upon launch.

The most popular NFT auction house is OpenSea, which is hosted on the Ethereum blockchain. Two other blockchains with NFT marketplaces that have exploded in popularity are Cardano and Solana. Cardano could mint NFTs before its release of smart contracts. Users can shop for Cardano NFTs on CNFT.IO. 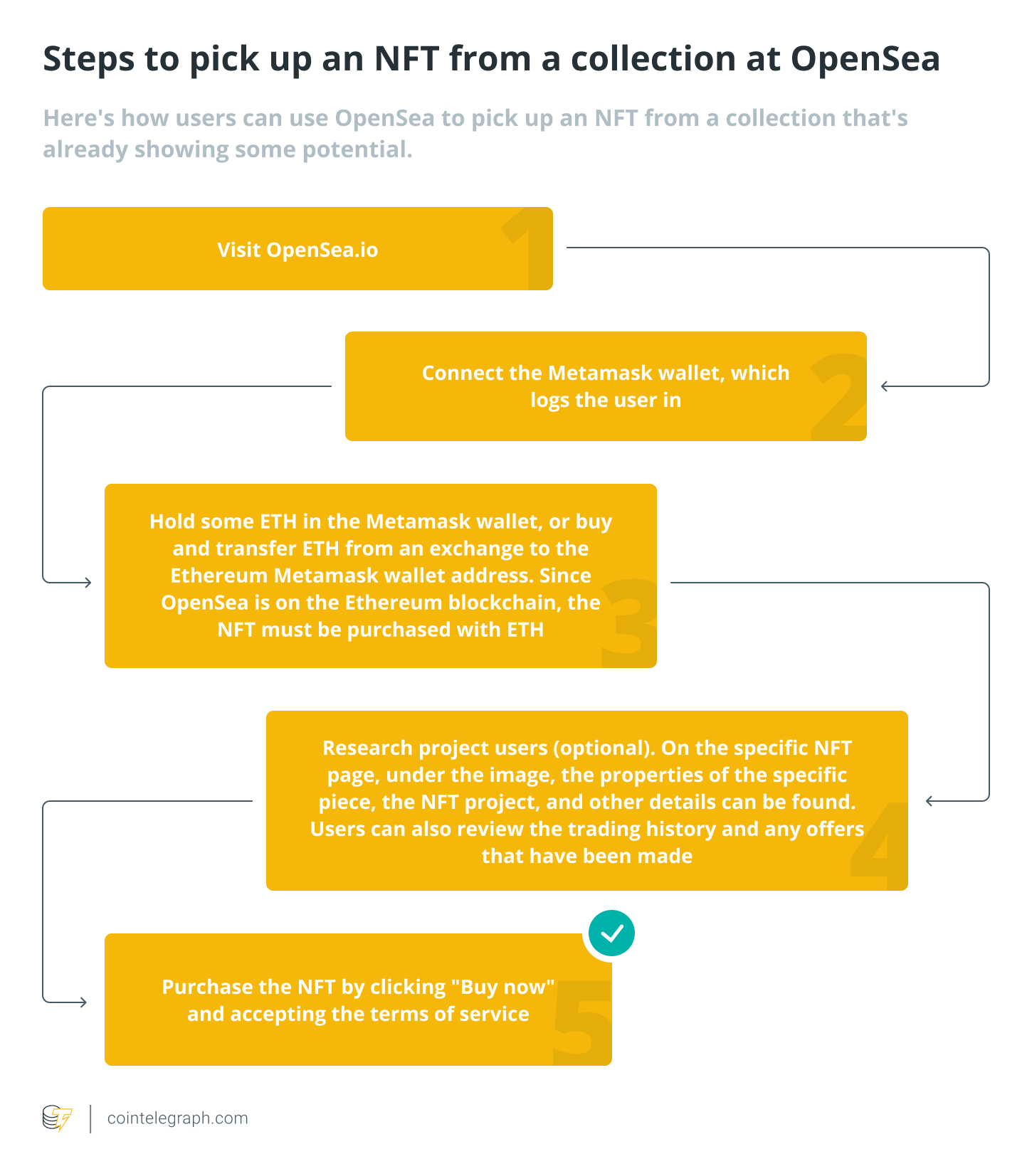 Alternatively, users can make an offer, after which they need to wait for a response from the NFT owner, who will either accept or reject their offer.

Step 6: Upon clicking “Buy now,” users can review the transaction in Metamask before confirming or rejecting it. Pay attention to the gas fees, because fees on Ethereum can get notoriously high. If the fees are too high, users can always try again later, albeit with the added risk of incurring a price increase.

Step 7: Once the transaction has been processed, the NFT will appear under the user’s items.

Looking ahead: NFTs and the metaverse

A new world is emerging. Much the same way that the Social Web (Web 2.0) has changed the Internet forever, the potential for NFTs to do the same via the metaverse is even grander in scale.

The metaverse is, in essence, the world, but online. Entire communities are being built on the blockchain, with digital real estate being sold, avatars being adopted, and so on. A digital world is being built alongside the real one people currently inhabit.

In its current imaginings, users will be able to use their unique NFTs to showcase their identities in this world. Users will interact with it in much the same way they do with the real world. Over time, the metaverse will take up increasing importance in society. This is because users won’t be limited to “hopping on.”

Akin to when people used to use phones to say “I’m going online,” now people say, “I’m going to check that on my phone.” The metaverse will have the same revolutionary effect. Users will access the metaverse, not just with their phones or PCs. Their phones will have augmented reality features too. Virtual reality headsets will be sitting in every household, waiting to connect. And the metaverse will coexist alongside the real world and acquire increasing significance in the future.