Asia Blockchain Summit 2019 (ABS 2019)announced its collaboration with the world-famous hardware wallet company Ledger, who will sponsor 1000 ABS Limited Edition Ledger Wallets based on the classic Ledger Nano S that’s worth $200 to participants of ABS2019. Through the world-class platform of ABS2019, the collaboration is expected to raise global crypto industry’s awareness to asset security.

Asia Blockchain Summit 2019 , the biggest blockchain event in Asia, will take place in Taipei, Taiwan on July 2-3, expected to attract over 5,000 blockchain industry elites and over 300 top companies worldwide. Apart from the main agenda, a huge amount of visitor flow and activities held by different companies will also liven up the whole week, making it a non-stop event of “Taipei Blockchain Week”.

The main activity of ABS 2019 contains two important parts: a summit forum of 140 world top speakers for $150 (Full Pass ticket) and the blockchain theme exposition which is expected to bring a large number of crowds for $10 (Expo Pass ticket), both tickets are now available to purchase on the ABS official website, Huodingxing and Accupass.com. Succeeding the popularity of last year’s ABS with 4000 people participating, this year’s summit and Taipei Blockchain Week is expected to have more than 10,000 people involved. 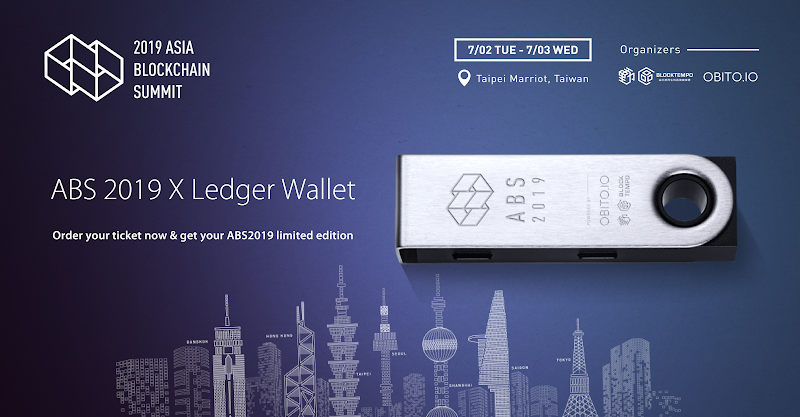 An influential event over Asia’s developing situation, bringing up highlights in crypto that draws the world’s attention.

The biggest world-class blockchain summit in Asia, why Taiwan?

With blockchain moving towards the mainstream market, global industry is actively communicating with national regulators and becoming mature while Taiwan’s friendly regulations are at the forefront of the East Asian blockchain industry. Taiwan's financial supervisory institution also announced a complete STO regulation coming out in June. Such breakthroughs in regulations will also change the industrial aggregation pattern in East Asia. In-depth collaboration with policy makers is a crucial part of the event. Essential authorities including Financial Supervisory Commission (FSC) and National Development Council (NDC) will also attend the summit.

Taiwan may be the first in East Asia implementing the STO regulations with its official introduction in June or July following FSC’s preliminary bill proposed in April. With the breakthroughs in regulations, Taiwan can be of great chance becoming the only place to develop STO in East Asia, changing the Asian blockchain industry’s fate and opening up more possibilities in the East Asia region.

ABS2019 will also have the high participation of the government. In addition to the presence of governments and authorities at all levels, ABS2019 also works in depth with the “Taiwan Congressional Coalition for Blockchain Industry” composed of more than 20 legislators, which not only enhance the substantial influence of ABS2019, but at the same time take actual action in promoting revolutionary breakthrough in regulations from the government’s side.

ABS2019 will reach the core of blockchain, while practically discussing the development and trend of the technology. Economist Nouriel Roubini accurately predicted the 2008 Financial Crisis in The 12 Steps to Financial Disaster.

As being a constant critic to crypto currency, he’s going to have an intense debate with many industry experts about the future of decentralization.

The summit will also focus more on the trend of blockchain market: He Yi of Binance will talk about her experience and the future plan for Binance, founder of 3 billion daily trading volume exchange BitMEX, Arthur Hayes will explain the potential market for Bitcoin derivatives, and Samson Mow of Blockstream will also join the discussion with multiple experts about the challenges and breakthroughs of the Bitcoin blockchain in Layer2 Solution. More in-depth discussions are expected to be involved in the event.

ABS2019 is hosted by the blockchain industry media “BlockTempo” and the blockchain tech-company “OBITO.IO” blockchain global companies like Binance and Ledger also join as partners, together making bigger value and world influence of the event. 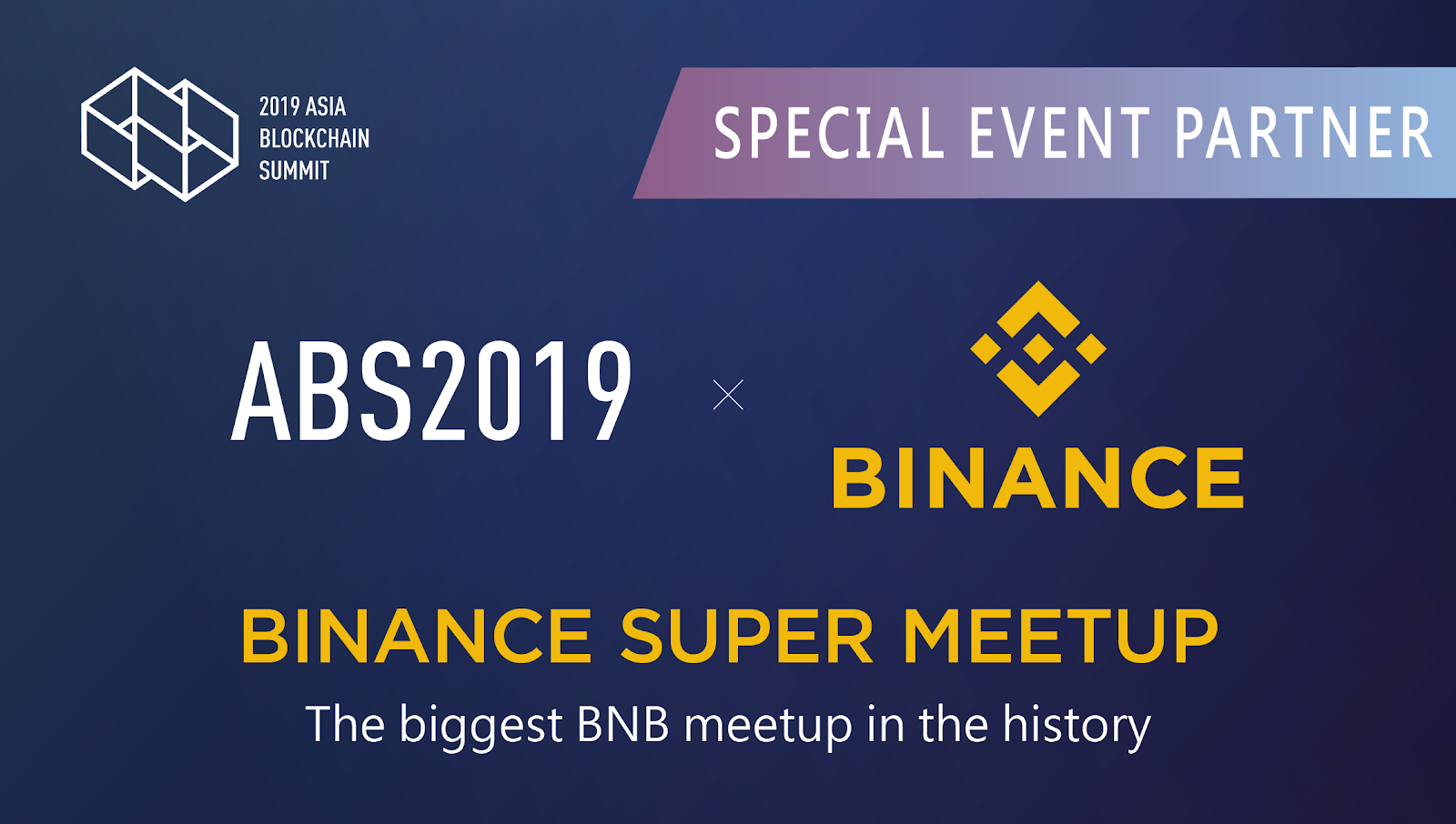 One of the special Activities is the Binance Super Meetup. Binance worked in depth with ABS2019, organizing Binance’s first global 1000+ fans offline event in the history on the evening of July 2, the same venue of ABS. By then, more than 1K BNB fans from around the world will gather in Taipei, participating in Taipei Blockchain Week and the upcoming event in Asia.

Taipei time 7pm on July 2, at the ABS2019 exhibit hall, Binance Co-Founder Yi He will show up with representatives of Taiwan Binance users and the Binance Angels, interacting with global users and discussing the development of Binance ecology. In addition to receiving special limited gifts from Binance, participants will even get the precious chance of a “Dinner Date with Yi He” during the activity. Pay close attention to ABS2019 for more details and registration information released in the near future.

Co-Founder of Binance He Yi announced: “We’re very pleased to partner with ABS2019 to hold the Binance Super Meetup and communicate with the global community of Binance. Binance is about to celebrate its 2nd anniversary, and we can’t go this far without the support of our users around the globe. We welcome everyone from the community to our super meetup, and together we shall build up a better ecosystem for Binance and all its users.”

With cryptocurrencies like Bitcoin moving towards mainstream and attracting more participants, ABS2019 hopes that through the collaboration with Ledger, to enhance digital currencies’ influence on mainstream application and its owners’ awareness to asset security.

1,000 ABS limited edition of Ledger hardware wallets will be given to the first 1000 onsite registrants of the summit on July 2nd. More details and latest news can be found on official channels.

Ledger also shared some words about the partnering with ABS: ”As a global leader in blockchain asset security industry, it’s our honor to be one of the sponsors of this year's Asian Blockchain Summit. Taiwan is known for its high-tech industry and has a key role in the development of blockchain technology in the Asia Pacific region. Taiwan is celebrated for its high-quality development talents, and the market here is also gaining more interest for blockchain and cryptocurrencies. For Ledger, we are of great pleasure to participate in Taiwan's largest annual event."

Taiwan,the blooming Blockchain island, aims to be the game changer in Asia

In ABS2019, public and private sectors from banking group, major local enterprises, FSC, NDC, to the Ministry of Economic Affairs have all shown strong aggression and positive attitude towards innovation, not only to establish an effective and moderate supervision on the regulations, but also jointly promote the development of the blockchain industry infrastructure, creating the so-called Blockchain Island.

With a friendly regulatory environment, talented human resources and the superior location, Taipei City has become the perfect place for the Asian blockchain Summit.

Last year, Taiwan's blockchain industry established a self-regulatory organization in Congress. This year, Taiwanese financial regulators are preparing to introduce STO regulations around July. With the worldwide influence brought by ABS2019, this event shall start a new chapter for Asia's industrial ecology, bringing new opportunities to the blockchain world.

BlockTempo is the most influential blockchain media in Taiwan and has hosted more than hundreds of events from the largest international blockchain summit in Taiwan to weekly meetups. It also runs multiple online communities in which the topics vary from technology, investment to industry pioneers.

BlockTempo has been focusing on filling the information gap and barriers between Taiwan and the world. Through different content including live streaming, real-time report, technology, entrepreneurship, industry, investment trends and in-depth perspectives, Blocktempo is making great attempts to speed up Taiwan’s industrial revolution in the era of blockchain.