GameFi is one of the hottest new trends to develop from the crypto industry, blending decentralized finance and nonfungible tokens with blockchain-based online games.

Unlike many traditional online games, which operate on a “pay-to-win” model and allow players to purchase upgrades to gain an advantage over others, GameFi introduces a “play-to-earn” model. This concept involves giving players financial incentives to play and progress through games. In some cases, this has allowed gamers to earn a full-time income by doing so.

For players looking to get involved in these blockchain-based games and start earning cryptocurrency and NFTs, Binemon is one of the leading games currently available. 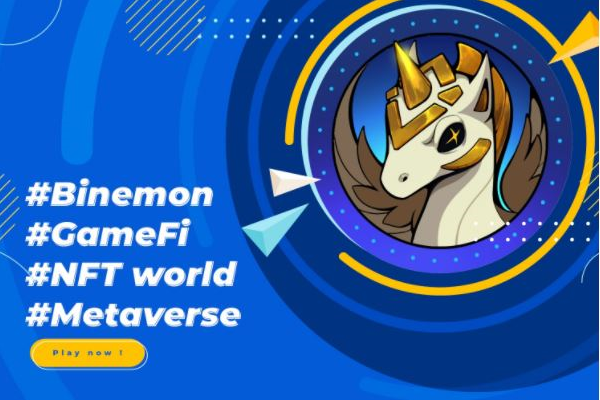 Binemon introduces five different promised lands where “Mons” live and players can acquire them via hatching eggs or purchasing directly on Binemon Marketplace. For the Mons, Binemon comprises four races: dog, cat, unicorn and titan. These can be classified into different types such as tanker, mage, fighter, archer and support. In this world, each Mons will have its own characteristics such as a statistic index, outfits and weapons.

A unique feature that allows users to combine their Mons is called fusion. After making a fusion, players can find their Mons to increase their bonus stat or even obtain rare body parts. The higher the stat or the stronger the Mons, the easier for players to win in the player-versus-player (PvP) battle or quicker to finish the mission in the player-versus-environment (PvE) mode.

At the moment, Binemon appears to be in the Prometheus phase and will receive a significant update, which is the Athena phase. In the Athena stage, Binemon will bring the PvP mode to the player community, which will contain duel and arena. Both of these provide battle gameplay for users.

The development team behind Binemon decided that Binemon can be played on multiple platforms such as Android, iOS or even web applications. For that reason, Binemon utilized Unity 3D as the game engine to maximize the cross-platform capability. With the base of Unity 3D, Binemon can also render high-quality 3D images for Mons, items, lands and many more. The high quality offered by it makes Binemon a superior option as compared to other GameFi such as Axie Infinity or My DeFi Pet.

Moreover, Binemon has the ambition to become a metaverse with its capability to create guild life, purchase land and even build houses powered by NFT and blockchain technology. Players have ownership rights thanks to NFTs and are able to exchange those assets for money.

The finance section in Binemon GameFi

Based on the roadmap, the PvP mode will be released on Sept. 7, enabling battles between players as well as awarding big rewards for every victory. In the PvE mode, users can try to finish as many quests from the system and receive the prizes, then unlock various new features and gears.

In the future, Binemon would also deliver the guild-versus-guild (GvG) mode for players to establish their own group of friends or elite players. The battle between guilds will open the opportunity to acquire more land and extend territory.

On Aug. 24, the Binemon team decided to organize an initial liquidity offer on Unicrypt with Binemon (BIN). Surprisingly, the ILO of BIN only took five seconds to sell out.

At the time of writing, the price of BIN has grown more than 20 times based on its price on CoinMarketCap and the trading volume has reached $8 million. There are more than 28,000 wallets that are currently holding BIN and people are waiting for the PvP mode to be released to utilize BIN.