Staying true to bright colours and overwhelming cuteness the team has met this challenge head on introducing interactive gameplay, new items and animation.

This minigame differs from classic Blockchain Cuties adventures with its unique new gameplay mechanic. The player needs to choose where to kick the ball to avoid the goalkeeper, when his or her cutie tries to score.

The logic behind the mechanic is kept secret. Nobody knows if it is simply a guessing game, where the player needs to get lucky, or there is strategy and complex logic involved. Either way it is engaging and fun to play. 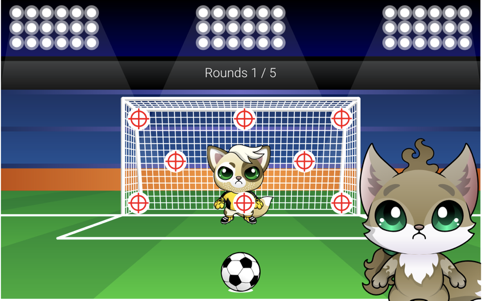 In order to win player needs to successfully score five times. It takes only one miss to lose the game and put the cutie into the cooldown.  It would be unfair to say that winning at this game is easy, so every victory is a good cause for celebration.

Victorious players have a chance to win special FIFA themed items like soccer ball and colourful jerseys. These are quite useful items that not only look adorable, but give the wearer several types of in-game bonuses. For example the  referee set is one of the players’ favourites, because of the advantages it gives to the cutie wearing it.

What’s more the football game has separate cooldown, so the players can take best of both worlds. There is no need to postpone other adventures for football and vice versa. This means that the number of activities for each cutie is effectively doubled.

The game is available during the time of FIFA World cup up until 14th of July.