Catheon Gaming, ranked as the No. 1 blockchain gaming emerging giant in the “2022 KPMG & HSBC Emerging Giants in Asia Pacific report,” is pleased to announce the official launch of the Catheon Storefront, a nonfungible token (NFT) marketplace built for blockchain gamers. 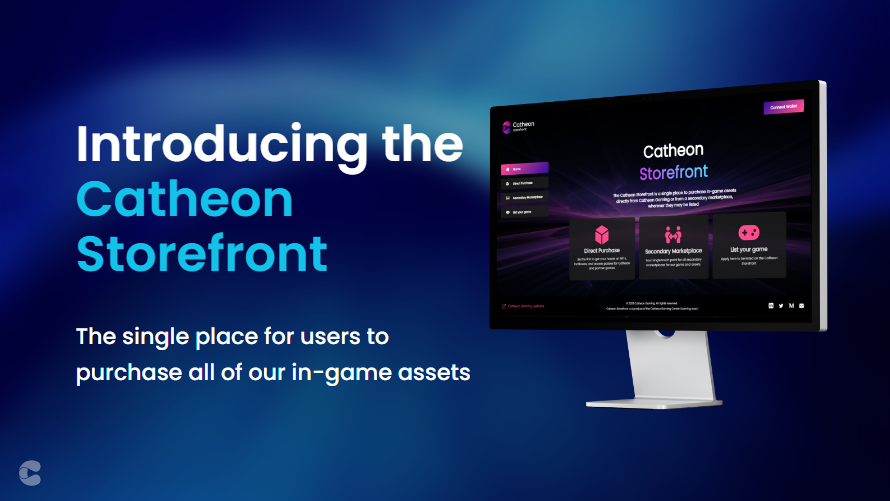 The marketplace, which will be part of the upcoming Catheon Gaming Center, will provide users with a single source to locate, buy and sell NFTs that have real utility in games. Catheon Gaming’s mission is to provide a user experience that makes blockchain gaming accessible for all gamers. The Catheon Storefront will have the following key features:

The storefront can be accessed at the following link: https://store.catheongaming.com/

NFTs on the marketplace will include those from Catheon’s extensive catalog of blockchain games, as well as NFTs from other developers and publishers. All NFTs featured on the platform provide real in-game utility within their respective game titles. Catheon’s catalog currently sits at 25 high-quality games across eight game genres, and new titles are being added regularly. These titles include games, such as SolChicks, Aotuverse and Prajna Gate among other highly anticipated titles.

This announcement is part of a broader initiative at Catheon Gaming in its announcement of the Catheon Ecosystem and the rebranding of the CHICKS token to CATHEON to function as their ecosystem token. This will be the first token of its kind on the Solana and Polygon networks and with the entire Catheon Gaming brand and portfolio behind it, CATHEON will be the most developed ecosystem token of its kind in terms of utility and the breadth of the ecosystem backing it.

“We are very excited to be launching the NFT storefront as part of our broader Catheon Ecosystem initiative. The Storefront will form an essential section of the Catheon Gaming Center, which aims to reduce the friction for gamers to interact with the blockchain across our portfolio and partner games. We see this as an essential step to drive the broader adoption of blockchain gaming and are excited for gamers to see the benefits that the blockchain will bring.”

Catheon Gaming, ranked by KPMG and HSBC as the No. 1 emerging blockchain giant in Asia–Pacific, is one of the world’s fastest-growing integrated blockchain gaming and entertainment companies. Catheon Gaming is the only end-to-end platform providing world-class technical, publishing and partnership capabilities for the world’s leading game studios, companies and brands seeking to navigate their path into Web3. By being the partner of choice, Catheon Gaming has built the industry’s largest portfolio of blockchain games and one of the deepest ecosystems to achieve its goal of being able to revolutionize the way we play, live and earn.