On July 3, Bitcoin (BTC) web mining difficulty plunged to 14.36T with a ratio of 27.94%, marking the largest difficulty reduction in BTC history, according to data from BTC.com. The reason for this slump is that Chinese mining farms are migrating out of China and a number of mining rigs are shut down. In the future, mining will face higher thresholds in clean energy and the global layout. Against this backdrop, cloud mining known for its lower mining threshold is likely to gain more favor among common users.

Mining refers to the process in which miners use relevant equipment to solve the mathematical problems given by the network ahead of others to obtain bookkeeping rights. The rise of BTC prices is fueling a boom in the mining industry. Data from PANews showed that the overall output scale of the BTC mining industry was about $5.012 billion and that of the Ethereum (ETH) mining industry was about $2.69 billion in 2020. The highest energy consumption of the BTC mining industry throughout the year 2020 will reach about 77.78 terawatt-hours, which is equivalent to the energy consumption in Chile, according to an estimation by Digiconomist.

The principle of mining is to guess the number. The higher the equipment hash rate (the higher the calculation times in the unit time), the greater the probability of guessing the answer. Miners have been in constant pursuit of higher hash rates and have driven the mining industry to go through the stages of CPU mining, GPU mining, ASIC mining and cloud mining, with mining farms, mining rigs and mining pools.

The mining rig spot stock is priced based on income forecasts. Some time ago, Bitcoin hit $63,000 and Antminer S19i miners were sold at 70,000 yuan, which is extremely expensive for common users. Electric charge is an important cost for mining. With high electric charges, it is difficult to resist the price slump. Large mining farms can get preferential electricity prices by virtue of scale advantages and ordinary users cannot compete with them. In addition, miners need to have the relevant knowledge and devote energy to the selection, construction and operation of mining farms as well as the selection, maintenance and repair of mining rigs.

Cloud mining platforms with lower thresholds are emerging as the mining threshold increases.

Cloud mining means that the platform breaks apart the entire hash rate in the mining farm and segments it into hash rate plans with different quantities and time cycles. Users can place orders based on their own capacities and needs.

Users are not required to purchase mining rigs for cloud mining and thus can reduce preliminary input and recover their costs in advance. What’s more, they can enjoy low electric charges brought about by platform scale advantages. With special teams being responsible for operations and maintenance, they don’t need to do everything by themselves. Just by placing orders, users can enjoy benefits. Moreover, cloud mining features lower risks and has stable outputs even in bear markets. After stopping the lease, users can exit as they want.

At present, there are dozens of cloud mining platforms around the globe, and among these, Genesis Mining, BitDeer, BitFuFu and MinerGate rank in the top four.

When it comes to user scale, Genesis Mining, BitFuFu and MinerGate from the top four players have more than one million users. Platforms in the second echelon that have more than one hundred thousand users include OXBTC, Hashnest, Suan Li Feng, etc.

When it comes to the number of mining rigs among the four powerhouses, BitDeer and BitFuFu own hundreds of thousands of mining rigs. 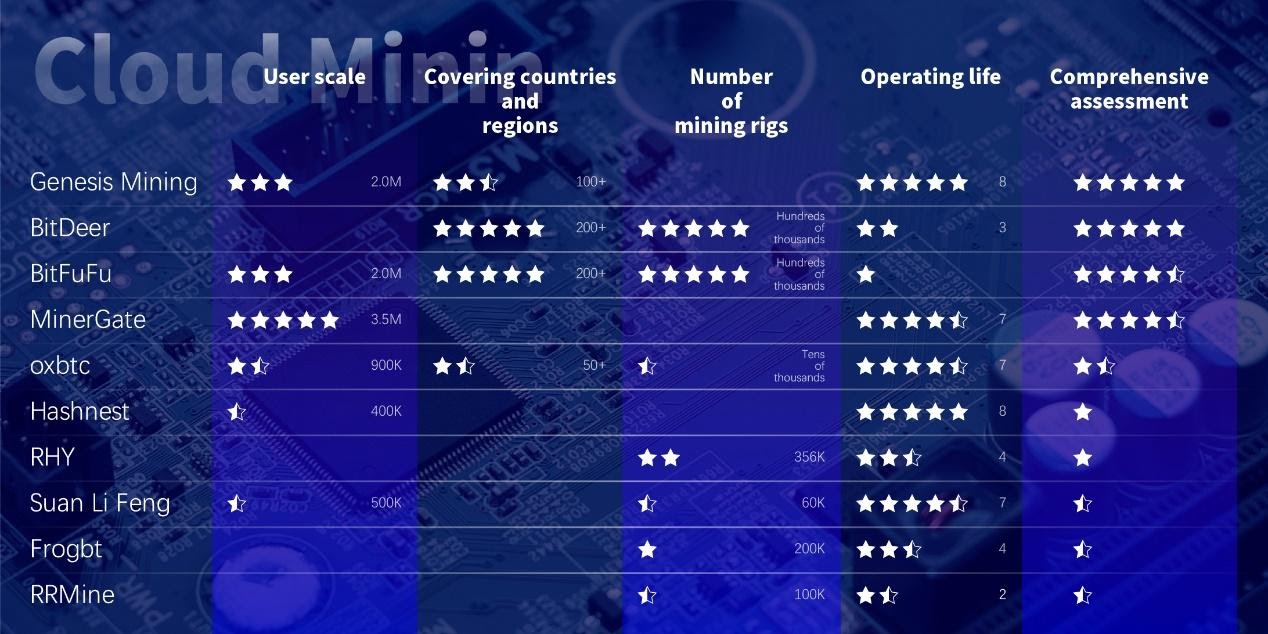 Currently, the “chip shortage” swept across the world is difficult to be solved in the short term and gravely constrains the capacity of mining rigs. With the inflow of second-hand mining rigs in the market, mining accidents are deemed by many people as good opportunities to go bottom fishing and related funds are seeking opportunities to accept the offer. It can be anticipated that mining rig resources will become the key to restrict the development of cloud mining platforms until the effect of “chip shortage” disappears completely.

Some platforms have become aware of this. It is said that BitFuFu signed a 10-year mining farm custody agreement with Bitmain and has input and enabled over 500-megawatt loads mainly in the United States, Kazakhstan and Russia. Additionally, in March 2021, it booked 8,000 sets of flagship Antminer S19i Pro mining rigs. This order is scheduled to be delivered in the second half of 2021.

The cloud mining industry is confronted with many problems. First of all, the barriers to enter the mining industry are so high that many platforms are unable to fend off risks such as price slumps and large-scale power outages which cause losses to users. Top platforms are relatively safer. Amid this global migration of mining farms, some mining rigs fail to power on during transmission. In this case, BitDeer notifies users by email and refunds affected mining plans. All losses are borne by users. In his microblog, Jiang Zhuoer, the founder of BTC.TOP, said users can choose to get a full refund for mining rigs that have been paid but not run yet. Lease services purchased by users will be migrated to markets outside China and will not be affected until the performance of the agreement, according to BitFuFu.

The second problem is the money game. Cloud mining has developed rapidly in the last two years. Related platforms have sprung up but hash rate products rolled out by many platforms are not backed by actual mining rigs and the so-called earnings depend on the ordering of new users. These platforms are actually Ponzi schemes under the cloak of cloud mining. Finally, it is hard to get rid of a fund chain break, platform runaway and loss of user funds.

Over the last month, Chinese mining farms have been expedited to move out of China. On June 21, the listed company in the U.S., BIT Mining Limited announced that its first batch of 320 mining rigs was shipped to Kazakhstan with a total hash rate of about 18.2 petahashes per second (PH/s), and the second and third batches (2,600 sets of mining rigs) will be shipped to Kazakhstan prior to July 1 with a total hash rate of 102.3 PH/s. On June 21, CNBC journalist Eunice Yoon confirmed from the logistics company Fenghua International that 3,000 kg of mining rigs were being shipped to Maryland through air transportation. On June 25, Poolin’s decentralized standard hash rate protocol Mars Project announced that a batch of mining rigs will be migrated to North America and Kazakhstan and that it will suspend the issuance of Wrapped Bitcoin (wBTC) and ETH earnings before migration is finished. It is said that the main destinations of Chinese mining farms include the U.S., Kazakhstan, Canada and Russia.

With the decrease in the number of mining rigs, the output per T hash rate will increase. Based on BTC.com data, the income per T was 0.00000631 BTC on June 14, which was 0.00000875 BTC on July 3 with the number of mining rigs being halved, showing an increased rate of 38.67% in output. As currency-based incomes in mining farms outside China soar, cloud mining platforms that have laid out mining farms outside China have made considerable yields in this period of time.

According to reports from WuBlockchain, Bianews and others, the global layout of mining farms has further improved the mining threshold. Currently, there are limited positions for mining farms in other countries and many mining farms are being constructed. Existing and high-quality mining farms are in sellers’ markets and the prices in buyers’ markets are constantly on the rise. Under such circumstances, it is difficult for mining farms with inferior strengths to migrate out of China and have to sell their mining rigs at lower prices to stop losses in time.

In the cloud mining industry, small platforms will be knocked out of the game and resources and users will concentrate on a minority of head platforms.