CoinSwap.com DEX on BSC will launch mining on October 20

CoinSwap.com is the most innovative decentralized exchange (DEX) yet in the entire blockchain space and they’re about to launch mining on Oct. 20. CoinSwap.com’s combination of increased functionality with sound tokenomics and low fees sets it apart from other DEXs that haven’t innovated at all over the last 12 months.

While almost every other DEX over the last year has copied and pasted someone else’s protocol and not innovated for users to increase their experience, CoinSwap.com’s placed special emphasis on building an entire ecosystem for users. 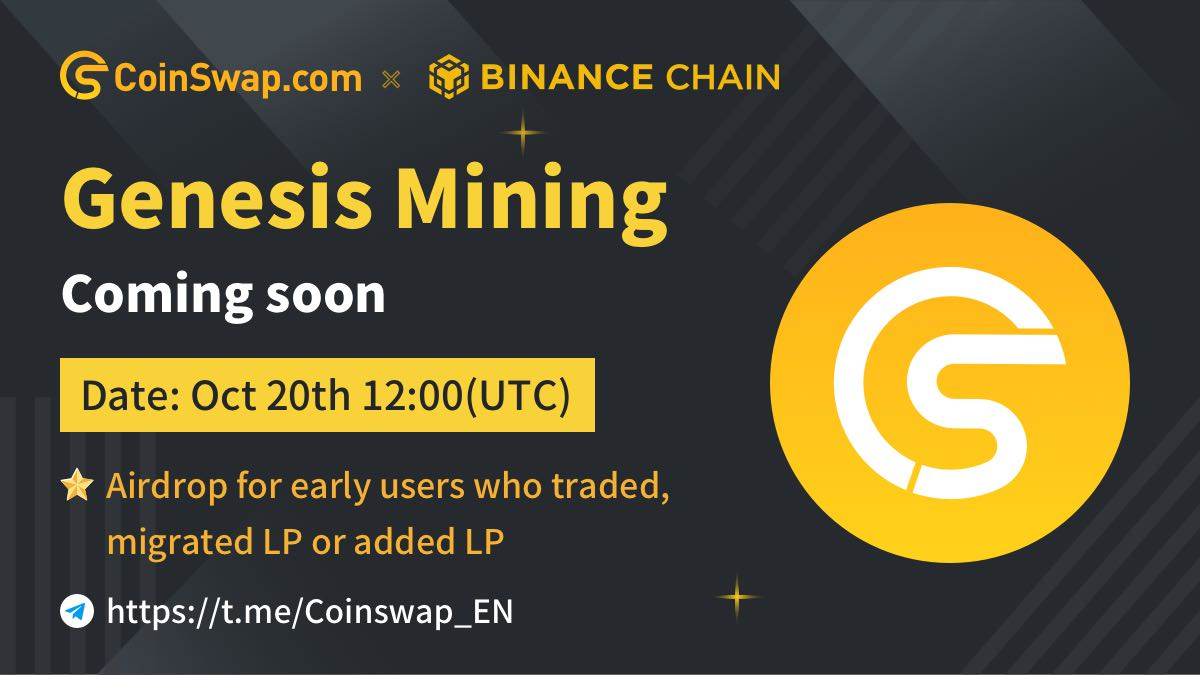 CoinSwap.com much like other DEXs provides the obvious AMM but they’ve set themselves apart by becoming the first decentralized cloud [DeCloud] trading protocol.

Some of the other features and functions of CoinSwap.com that distance CoinSwap.com from its competitors: trade, farm, advanced trade, deductible fees, migrate liquidity from five other DEXs, node NFTs, personalized customization (personalize a DEX and gain rewards and fees), market data, DAO governance, financial derivatives, assets and referral rewards.

The first DEX with supernode NFT

Users can earn cashback through building their own ecosystem within the larger CoinSwap.com’s ecosystem and help build ecology. Unlike other platforms CoinSwap.com rewards users with referral rewards by helping build CoinSwap.com’s family but while also enriching themselves by generating revenue in CoinSwap.com’s native token, COINS.

There’s no other DEX yet that allows users to build their own ecosystem and DEX within a larger protocol. This internal community that users can build through NFT and Supernode NFT is the future of the DEX world, why would users want to experience DeFi anywhere else?

CoinSwap.com’s DEX is extremely rare not because of the NFT and supernode NFT functionality but for other reasons as well. One major reason CoinSwap.com has separated itself from the competition is the ability to trade with professional settings on CoinSwap.com’s advanced trading protocol.

Users can experience trading on a DEX for the first time and will benefit from the k-line functionality and the ability to see the depth of the market in real-time.

These features allow users to trade with the traditional centralized exchange (CEX) benefits but through a decentralized protocol and gives users that the blockchain space was built for the inclusivity they deserve in financial markets.

Pay for trading fees in COINS

Users will notice that when trading on CoinSwap.com users can pay for their fees through COINS. This is a net benefit for token holders and those providing the ecosystem with liquidity because, with every transaction, some of the COINS’ supply is burnt.

This model is much like EIP-1559 that just recently launched on the Ethereum network, which is a deflationary mechanism to reduce Ether’s (ETH) supply over time. This same system has been implemented by CoinSwap.com and this is the first DEX in the entire world that has such an innovative system to provide sound tokenomics.

It’s important to understand that when staking, COINS price rise and fall and will affect the amount of a user's locked reward while also being a good control on the circulating supply of COINS.

The primary initiative of CoinSwap.com is to continue providing its users with the most advanced functionality in decentralized finance (DeFi) and with the lowest fees. By operating on Binance Smart Chain and mixing CoinSwap.com’s node and supernode NFT program, users will experience the lowest fees in the blockchain space yet.

Mining is the last function to launch on the platform and on October 20th users will have the full functionality of the world’s most revolutionary DEX yet. Join us and enjoy high APY together.