Duet, a multichain synthetic assets project, has accomplished substantial progress since its inception last year. Now, it’s finally on the doorstep of its version 1.0 mainnet launch and two public offerings.

Behind these aggressive achievements is a $5-million investment initiated by multiple top-notch investment institutions both inside and outside the crypto industry, showcasing the faith others hold in this rising project and the concept it upholds — decentralized finance (DeFi) 3.0.

Duet is a synthetic assets minter built on a yield aggregator that automates the process of yield farming, maximizes returns and releases additional liquidity to users. On Jan. 31, 2022, Duet completed its version 1.0 beta public test, where more than 6,000 people participated and more than 160,000 successful transactions were made.

The results left the Duet team with 400-plus feedback messages addressing possibilities for product improvement. After solving these issues, Duet is back with its mainnet launch. 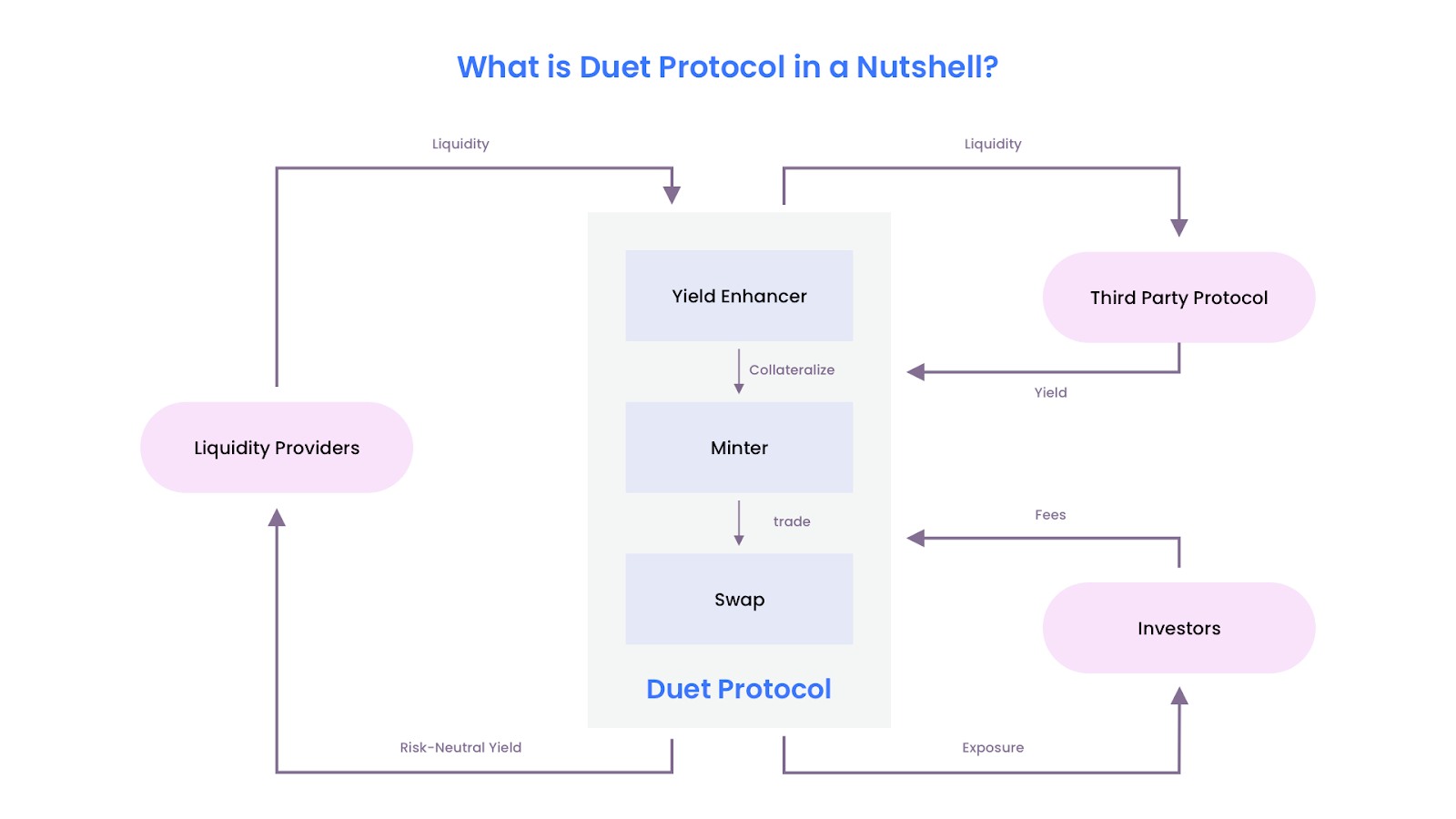 After its mainnet launch, the Duet platform will be open to all users. In the short-term, receipt tokenholders can enhance their returns by utilizing stablecoins minted with the Duet protocol. In the long-term, Duet could be the entry point of liquidity provision and the reserve capital system that supplies liquidity to almost all DeFi protocols while generating a world of synthetic assets whose values are 100% backed by its reserves.

Along with its mainnet launch, Duet has partnered with two leading public offering platforms, PancakeSwap and Copper Launch, for its token offering to the public.

Duet received the chance to launch its public offering on PancakeSwap with a nearly unanimous vote of 99% for “Yes” from the PancakeSwap community. So far, it’s the largest public-offering event in the thriving BNB Chain ecosystem.

Following the offering, 2.43% of the total token supply will circulate with an initial market cap of $3.06 million. Duet’s liquidity bootstrapping pools — another feature of the public offering — will be held on Copper Launch, a user-friendly and permissionless platform in the crypto ecosystem.

The Duet protocol has been a perfect investment target as a project in its rising stages. Prior, Duet had already raised $3 million from world-renowned investors, including OmniLab, Draper Dragon, Everest Ventures Group, One Block Capital, Moonwhale Ventures, Zonff Partners and more.

With support from partners, investors and the community, Duet plans on several leaps this year: Duet will explore expanding its Earn module to a broader span of strategies, including an on-chain options design and bond market, to be used as infrastructure to improve its strategic partners’ liquidity-mining incentive mechanism. Leveraged liquidity mining is also in the pipeline to satisfy higher risk preferences. More synthetic assets will also be deployed to cover commodities, ETFs, inverse assets and indexes. 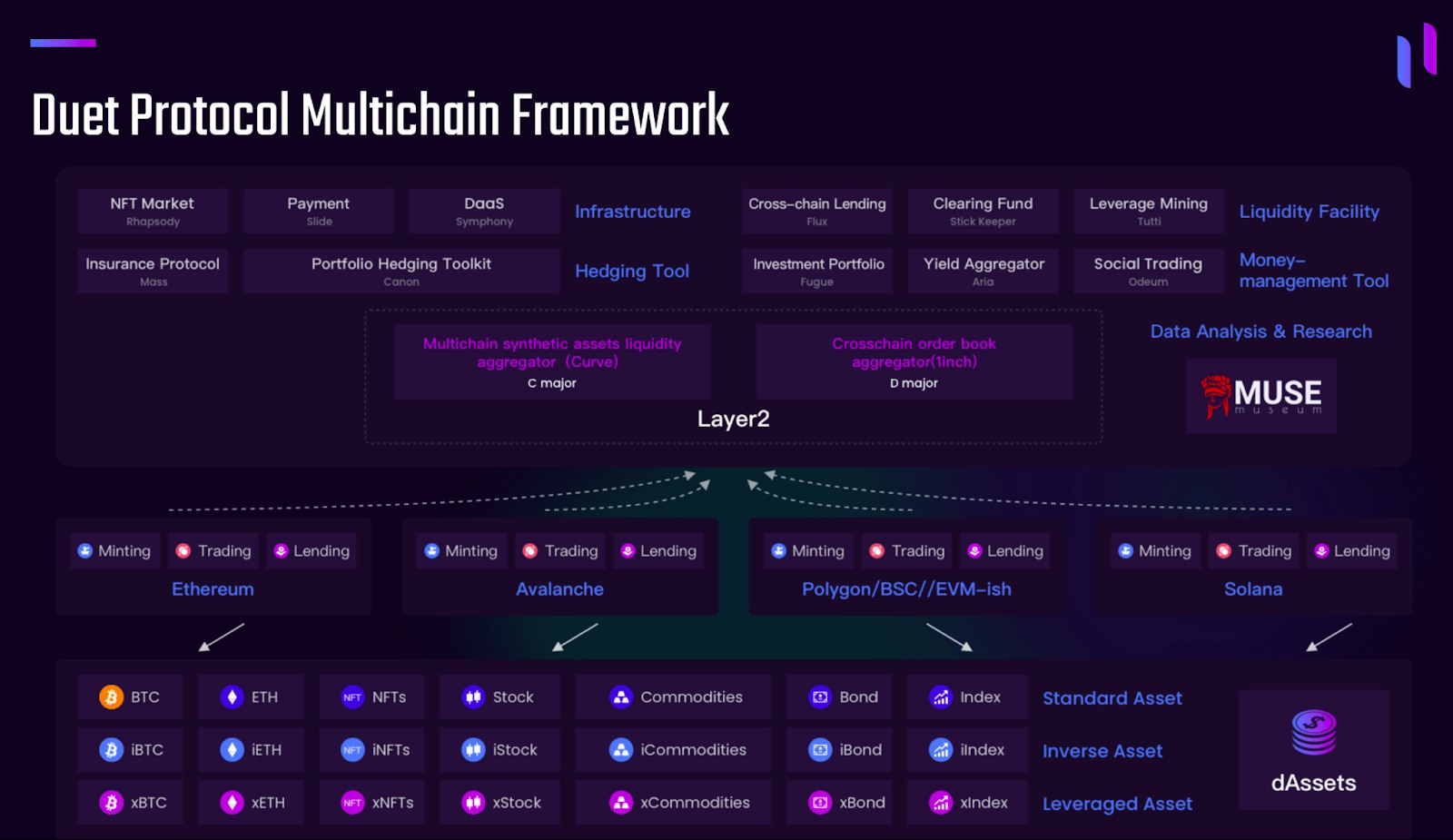 Duet has shared its thorough plan about the multichain DeFi ecosystem. Its minting, trading and lending functions will be deployed on several mainstream blockchains, including Ethereum, Avalanche, Polygon and others. Synthetic assets issued on the Duet platform will include standard assets such as stocks, commodities, bonds and indexes, and inverse and leveraged assets. All synthetic assets can be traded on Duet cross-chain by using the multichain synthetic assets liquidity aggregator.

Duet’s long-term mission is to be a community, market-driven and permissionless synthetic asset minter. A market-maker design to help on-chain liquidity could also be deployed, ideally to ensure liquidity for generated synthetic assets. As a DeFi 3.0 innovation, Duet’s well-designed reward-release mechanism built on the ERC-20 protocol provides users with better liquidity than the NFT or lock-in model from DeFi 2.0 while minimizing token dumping pressure.

The service will also be available for external use by three-party agreements, similar to Olympus Pro.