Eric Chou: “NFTs bring music to a greater and safer space for art.”

Wing Shya: “It has opened a new door for the world of art.”

The rarity of the collaborative artwork, combined with the fact that it’s the duo’s first foray into the NFT market, has made +E1 a huge success.

The series takes inspiration from Shya’s photography book, CHAOS, co-released with renowned Tsuguya Inoue. With CHAO+, Shya hopes to perpetuate the spirit of CHAOS through fusing different forms of art. Chou and Shya share a common interest in both photography and nonfungible tokens. From CHAOS, Chou selected five photographs, which were then animated by local visual artists and annotated with music by Chou himself to form a unique story. 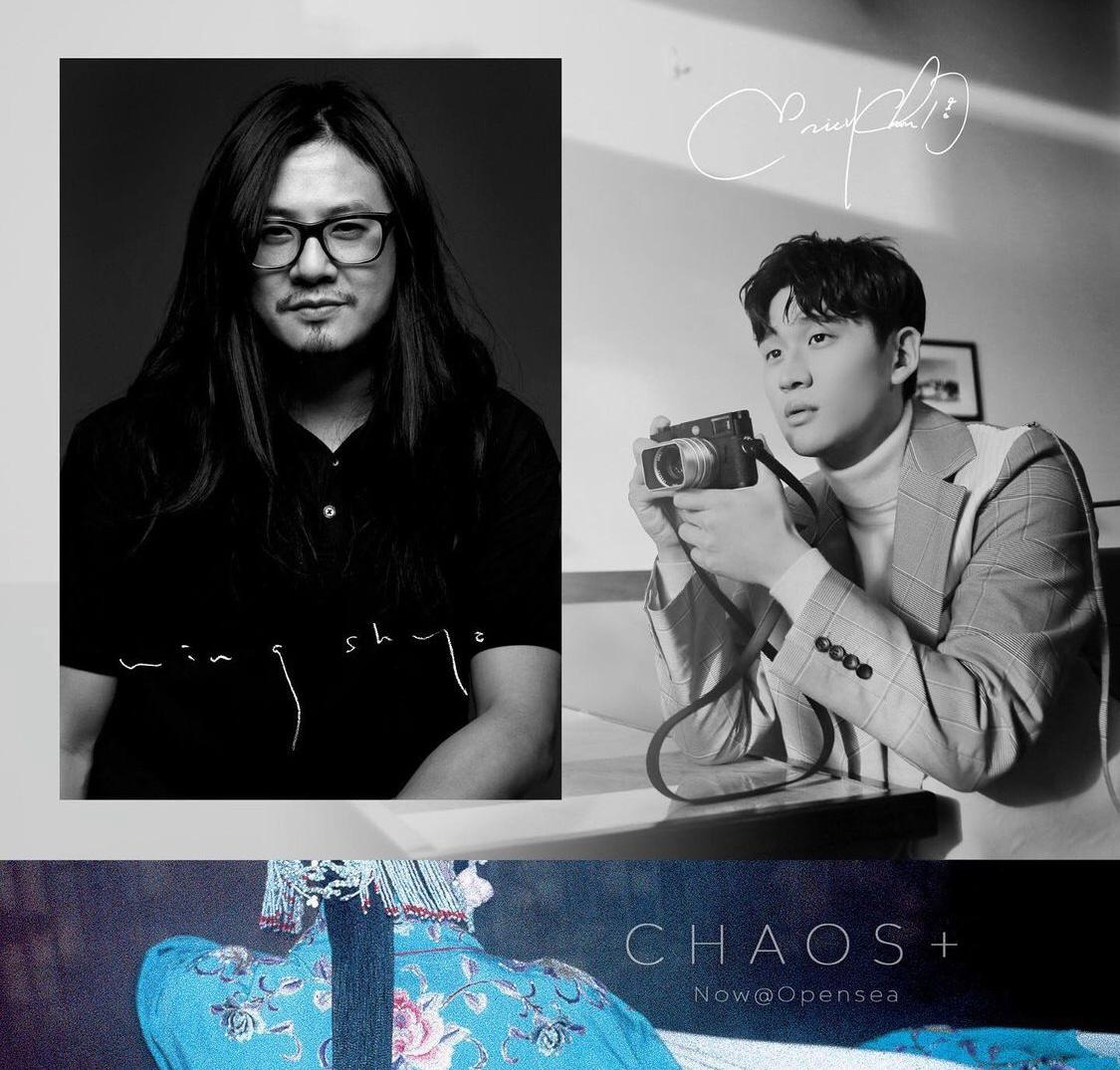 CHAOS+ is coordinated by Sunny Side Up, a creative agency under Sun Entertainment Group that presents NFT artworks of emerging and established artists from Asia. This is the group’s first issue of NFT digital art, with Orichal “1O1” as the technical advisor.

“With Eric’s participation this time, the photographs were given new souls. Therefore, the five works in CHAOS+ are named +E, meaning ‘given by Eric’ and interestingly resembling a math equation,” said Shya.

Typically, NFTs are created solo, while Shya and Chou chose to do a crossover. “We can see many unique collectibles out there, but it feels like everyone is living in their own rooms. Collaboration may bring things to a new level. So, I came up with the idea of working with artists from different sectors to see what chemistry it could bring,” Shya said.

Being true to their art still matters. “Technology allows new means of creation, but I often remind myself not to cater for new trends at the expense of the core value of art,” said Shya. Shya’s collaboration with Chou on CHAOS+ is just a start. More surprises are coming.

NFTs have the potential to transform the entertainment industry, putting the power into the hands of the creators, allowing artists to engage with their community directly, and opening a new avenue for communication with fans.

“NFTs will lead the way on our next phase of blockchain adoption and can revolutionize the entertainment and social media industries,” claimed Scottie Siu of Orichal, the incubator behind the NFT social platform 1O1.

“Artists have the ability to provide exclusive creative content, customized works, as well as to share information with anyone. More importantly, artists can collaborate with others and engage with their fan base through NFTs,” said Alex Dong of Sunny Side Up.

As the industry shifts and continues to rely on streaming services and alternative forms of revenue, NFTs can technologically advance the current industry’s business and social engagement landscape.

Wing Shya – A Hong Kong-based photographer who works in fashion, film and art, Wing Shya founded the award-winning design studio Shya-la-la Workshop. Shya started working for Wong Kar-Wai in 1997 and is also a recognized director who has directed several music videos and TV commercials. In 2006, Shya was the first non-Japanese photographer invited by Mori Art Museum, Tokyo to have his solo exhibition “Distraction/Attraction.”

Eric Chou – Eric Chou is a Taiwanese singer-songwriter who has more than 1 million followers on Instagram. Chou has been dubbed by the Taiwanese media as “the king of the lovelorn people.” Chou has released one EP and five studio albums so far, and his third studio album, The Chaos After You was released in 2017. Chou won the 12th and 14th KKBOX Music Awards in 2017 and 2019, respectively, as the Artist of the Year.

About Sunny Side Up

Sunny Side Up is an agency for NFT digital art pieces. It develops a broader prospect and a farsighted space for Chinese and international creative culture sectors. It aims to be the axis of connecting art and artists from different fields and the creative items can be widely spread around with the promotions launched globally online in the NFT world.

1O1 is an NFT-focused social community platform incubated by Orichal, a new marketplace and social media platform. 1O1 aims to transform the future of social media, whereby all NFTs would have a community to live in while users can interact with them — representing social connections, content access and engagement between artists, influencers, content providers and fans and with one another.