After whitelist giveaway campaigns in June and July, ZKSpace, the leading zk-Rollup-based Ethereum layer-2 (L2) protocol, is set to roll out the public sale of the James Rodríguez “Zurda” nonfungible token (NFT) collection on Aug. 15, 2022. Zurda — meaning “left foot” in Spanish — is an official collection of commemorative NFTs created in collaboration with football superstar James Rodríguez to be issued on ZKSea, the NFT minting and trading platform of the ZKSpace ecosystem. 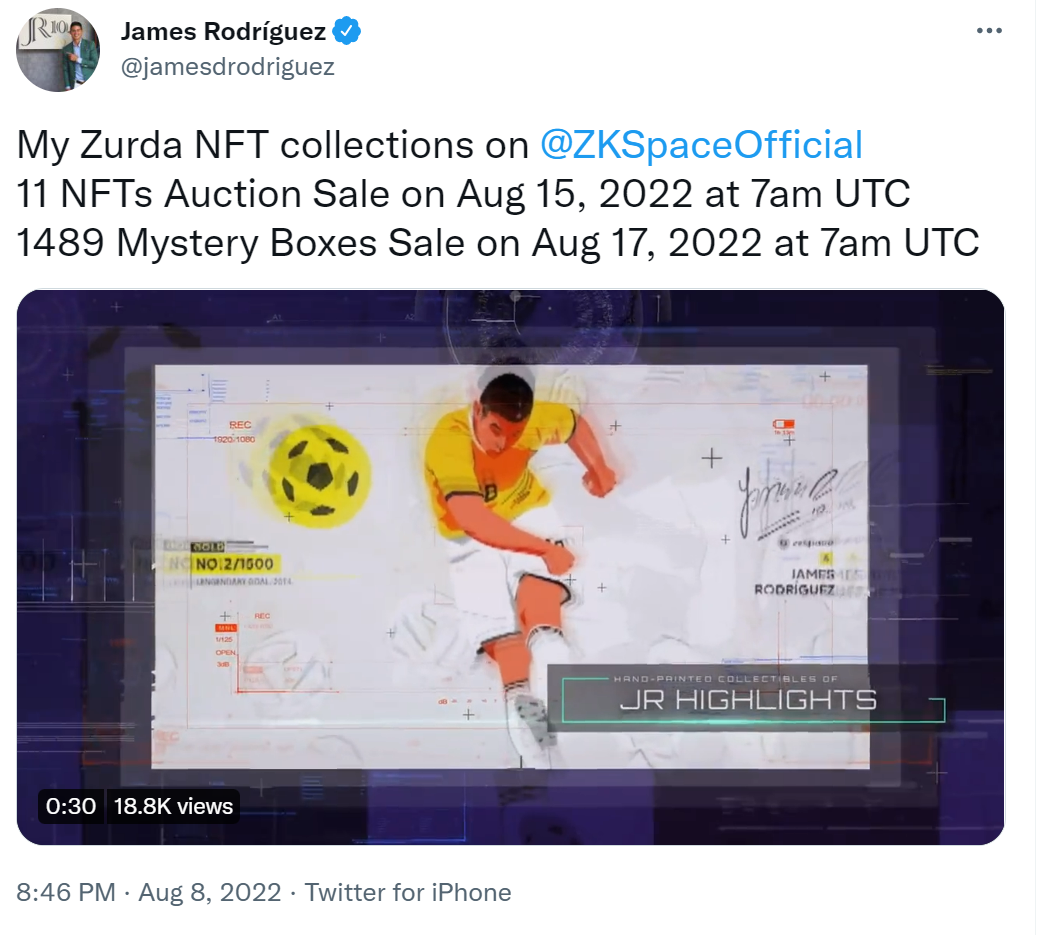 James Rodríguez is one of the greatest Colombian attacking midfielders of all time. Having a magical left foot and being able to play anywhere behind the front line, he is regarded as one of the most creative players in the game. He previously played for Real Madrid, Bayern Munich and Everton FC, winning a list of honors, including two Champions Leagues, two FIFA Club World Cups and a World Cup Golden Boot.

In launching his commemorative collection, James Rodríguez has joined the likes of athletes like Cristiano Ronaldo — who previously announced his partnership with Binance — in exploring the possibilities of promoting the sport and engaging fans via the influential blockchain innovation of NFTs.

Online assets combined with physical gifts has proven to be a modern and fashionable way to bring fans closer to teams and players. The convergence of the sports industry and the exciting blockchain sub-sector NFT has also seen great success, one example being NBA Top Shot, the marketplace selling basketball video clips, generating over $230 million in sales within a year of its launch.

The different rarity tiers in the “Zurda” NFT collection attach a higher value to the rare collectibles. By selling NFTs of different undisclosed moments through mystery boxes, it also makes the buying process fun and exciting, as no one knows when or what they will own, including the tier of rarity, until a box is opened.

NFTs with digital and real-world benefits

During the public sale, the Platinum and Gold NFTs, which are based on some of the most memorable moments of Rodríguez’s career, will be offered through an auction while the Silver and Bronze NFTs will be sold through mystery boxes two days after the auction closes.

The sole Platinum and 10 Gold NFTs were inspired by a total of 11 memorable moments, including Rodríguez’s 2014 Puskas Award-winning goal. The auction will begin on Aug. 15, 2022, at 7 am UTC, on ZKSea.

The mystery box sale will go live on Aug. 17, 2022, 7 am UTC. The price of the mystery boxes is 0.15 Ether (ETH), and they contain “Zurda” NFTs in Silver and Bronze grades. Whitelisted participants will be able to purchase the mystery boxes for just 0.12 ETH.

“Zurda” NFT holders can win signed jerseys and photos that ZKSpace has disclosed on Twitter, a video call or video recorded by James Rodríguez and access to multiple events on ZKSpace, including stake-to-earn events, future NFT giveaways and the ZKSpace Football Metaverse — all in celebration of the 2022 World Cup in Qatar.

ZKSpace — formerly ZKSwap — is a full-featured L2 protocol leveraging zk-Rollups technology to provide users with an ultra-fast, cheap and secure way to transact cryptocurrencies. ZKSwap’s version 1.0 mainnet launched in February 2021 as the first Ethereum L2 zk-Rollup-based decentralized exchange. It implements all the functions of Uniswap on L2 and solves the problems of slow transaction speeds and high gas fees on the Ethereum mainnet. So far, ZKSwap has gone through three major version iterations — ZKSwap rebranded and upgraded to ZKSpace at the end of 2021 — and has carried out hundreds of function iterations and optimizations without any security incidents.

ZKSea is the world’s first zk-Rollups-based platform supporting layer-1-to-L2 NFT mutual transferring and is the designated NFT-launch, -mint and -trade marketplace of the ZKSpace ecosystem. It is the blockchain technology partner of some prestige brands, including Coach New York, GQ Magazine, Shu Uemura, Atta and more. Moving forward, ZKSea will feature some exclusive NFT drops aside from the James Rodríguez commemorative-edition NFT collection, proving a popular alternative to L1 marketplaces and allowing more people to get involved in NFTs.

For new users looking to be a part of the NFT movement, ZKSpace also features a user-friendly fiat on-ramp, boosting usability and democratizing access to the exciting future of NFTs for anyone worldwide.