The world’s first Web3-gaming aggregation platform will be officially released on April 6, 2022, with the well-known blockchain game Plato Farm launched on the Formless launchpad as the first project.

“The current gaming industry is oligopolistic, and the Big Tech giants monopolize users and data for a profit. The rise of GameFi has changed the existing gaming rules — players are now able to independently control assets and data, transforming gamers from consumers to ’gold diggers,’” said Devin Bennie, founding member of Formless. “We have seen the development trend of Web3 and the power of GameFi to reshape the future of the gaming industry. At present, GameFi is still in its early stages, and there is a lack of diversification, poor user experience, a high threshold for player participation, incomplete ecosystems, poor decentralization and more. Formless was born as an offer for these demands. Our purpose is to build an open-chain game aggregation platform, linking games, gamers, guilds and the whole GameFi community. It will become the infrastructure of GameFi in the Web3 era.”

In practice, Formless aims to become the world leader in GameFi aggregation services, creating a suite of comprehensive features in the Web3 ecosystem, streamlining existing industry processes to optimize the user experience and empowering both players and games. The mission is clear: become the “Steam of GameFi” for the Web3 and metaverse revolution. Formless is going to create a free, open and fair Web3 portal that is fit to replace the existing regime, simplifying blockchain gaming by making it more integrated and user-friendly.

One can conclude that the Web2 gaming environment is exploitative of both gamers and games that rely on monopolistic suppliers that fail to distribute profit fairly. This status quo must change entering the Web3 era.

So what are the main challenges that Formless will face and solve? From a gamer’s perspective, the major issues are the high entry barrier for non-blockchain users, assets being impossible to manage across chains, scattered information on GameFi easily, and there being no all-comprehensive GameFi aggregation platform. Games also suffer due to an unfair model imposed by Web2 game aggregators. For pioneers moving into the GameFi sector, it can be quite hard due to the lack of a solid player base and guild outreach.

Formless is promoting a decentralized multichain platform where the play-to-earn model will be the framework for developers and players. Users will have absolute ownership of their content, data and assets and a granted protection of their privacy. In addition, they will also join a community of gamers that can get access to more than 200 of the platform’s partnered blockchain games and the latest and most complete information on the GameFi sector with the Formless dashboard.

Gamers have the unique opportunity to participate in initial game offerings (IGOs) and initial node offerings of Formless-listed GameFi projects through its launchpad. The Formless launchpad will support innovation in GameFi, promoting the best projects in the GameFi industry to all Formless gamers and community members and allowing them to invest from the very beginning.

Formless has its own purpose-built GameFi wallet that can support multiple public blockchains and help users to solve deposit and nonfungible token (NFT) asset management issues. The Formless NFT marketplace has different features and provides different services to the end-user, from mystery boxes and NFT issuance to NFT rentals in version 2.0, adding new dimensions to the secondary market while reducing barriers to entry.

Formless recently tweeted about the imminent launch of the Genesis Node Program. The whitelist is opened, and users can get access to 30,000 Genesis Nodes.

“The Formless team and the decentralization offered by its platform is far better than Gala. By joining the Formless Genesis Node Program, it is possible to participate in upcoming IGOs and get additional rewards,” said a gamer who has recently joined the Genesis Node Program. “I am very optimistic about the Formless team and its project. They are very capable, and I love what they are doing for the GameFi community and the NFT space as well.”

The first batch of 100 recruits will enjoy a 20% discount, and the nodes will receive many benefits, such as the launchpad whitelist. Hurry up, as nodes are limited.

Formless is composed of industry veterans from Huobi Global, Tencent Gaming, Okcoin and more. In the future, Formless will also launch an ecological fund to support the development of the GameFi industry and gradually build an autonomous community through its co-builder plan.

The team is active in building a solid ecosystem around the project, and recently it launched its GameFi acceleration program, partnering with some industry-leading NFT marketplaces and launchpads with the goal of sharing the liquidity of high-quality GameFi projects. Participants include BitKeep, NFTb, Shambala, Cherry Swap, Spores, CheersLand and Airnfts. 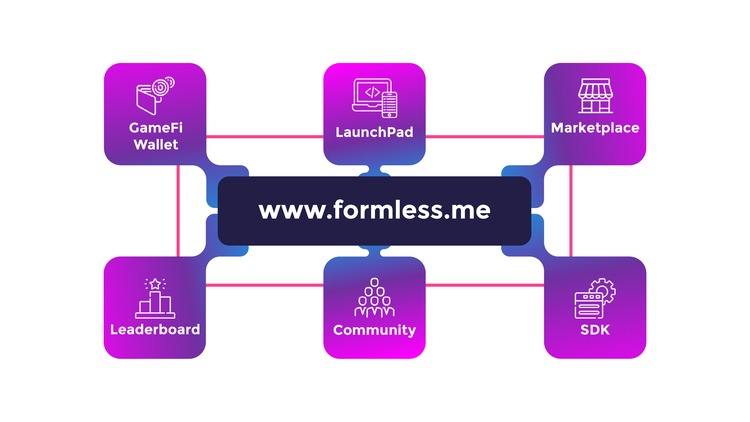