Probability coins: one step for Fort, one leap for crypto

People love surprises: For example, a surprise party for friends, an unexpected gift for the kids or a spontaneous trip. All of these enrich life and, according to some research, a positive surprise can ramp feelings of joy up to 400%.

Although there are almost countless various tokens in the crypto world, none of them can surprise or awe.

Luckily, as a pioneer, Fort has created Probability Coin (PRC), which not only works as a standard token but also preserves the possibility to win different returns. PRC, with probability as its intrinsic feature, is definitely a surprise.

Fort has introduced PRC to its ecosystem, where a basic token is called Digital Currency Unit (DCU). The user can acquire PRC from airdrops and other channels.

By design, for anyone holding one PRC, the algorithm allows one chance for them to win a number of DCU with an inverse probability, where the number ranges from  100 to 100 thousand, and the tokenholder can choose whatever number value they prefer.

For the time being, the official website provides the four-most popular return-probability pairs i.e. 1/X probability to win X DCU with X = 100, 1000, 10000, and 100000, according to a survey. . Shortly in the future, PRC will allow a completely free-range choice for the number value chosen by users. For those interested in self-customized pairs, they are welcome to contact Fort Protocol at fortdao@fortprotocol.com.

Although PRC is more than a lottery, the readers may still have this first impression. In below figure, PRC is compared with other lotteries. Notice that the cost of PRC is the lowest while the expected return, after tax, is the highest among all the selected lotteries. Also, the winning probability of PRC is the highest. 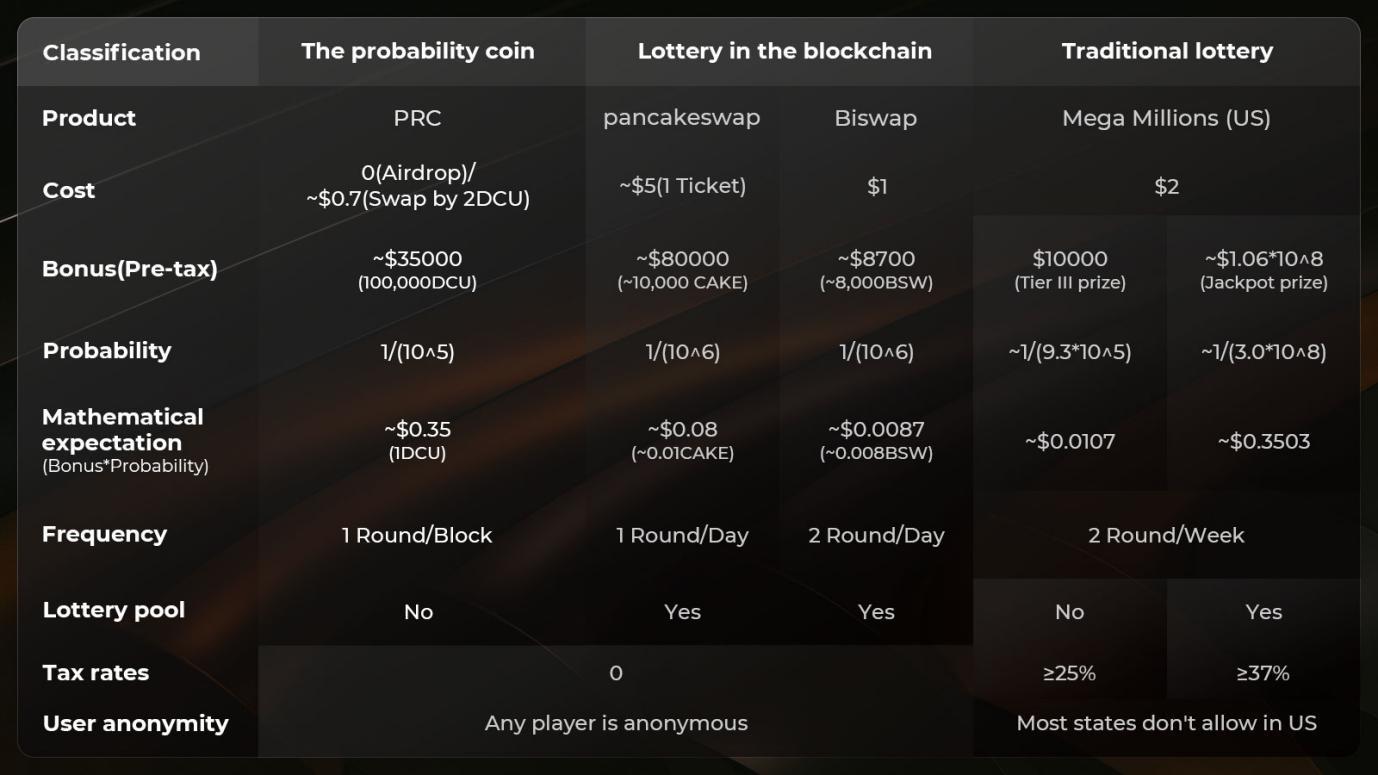 First, PRC, as a lottery, is almost spontaneous. Instead of once or twice daily, the tokenholder can roll a pair of dice per block — e.g., every three seconds whenever they want to.

Second, there is no lottery pool for PRC. The reward is minted directly by Fort, no matter how large, thanks to its infinite liquidity model.

Third, PRC tokenholders can choose the probability-return pairs they wish.

This section introduces the technical details of PRC; those not interested can skip it.

In layman’s terms, PRC fundamentally extends the probability space. Assume that μ and σ^2 are the expectation and variance of one lottery, respectively. PRC wins an amount of DCU, X, with inverse probability, or one divided by X.

In both cases, there is a discrete probability space. In the figure below, the X-axis and Y-axis represent the expectation and variance of one lottery, respectively. The left panel demonstrates the discrete case where only a few lotteries, as represented by the points, are available. 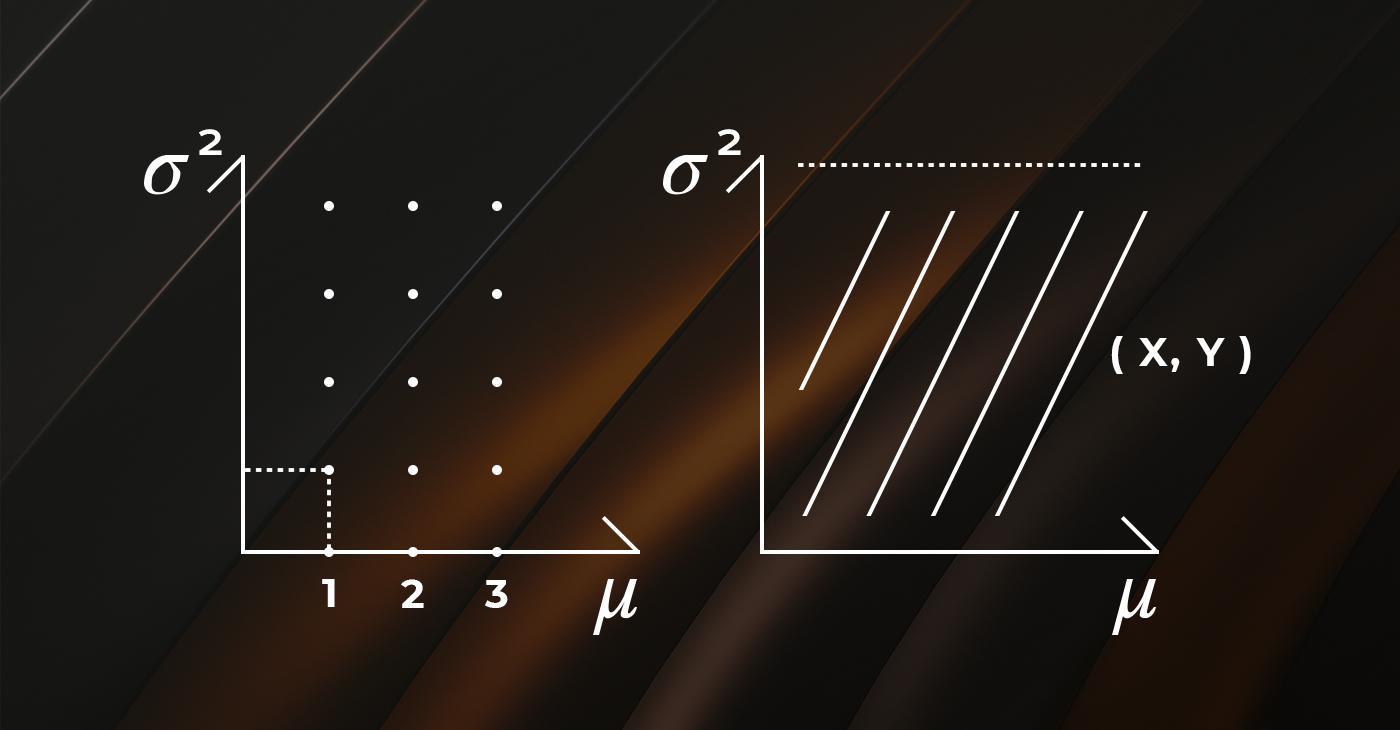 PRC also provides a continuous distribution with an expectation of Z and a variance of Z-squared multiplied by the outcome of X minus one. One draw with Z number of PRCs — e.g., getting a  ZX amount of DCU with an inverse probability of one divided by X — makes it a distribution series. The idea of a complete probability space can be seen in the right panel of the same figure, where all points in the Cartesian coordinate plane are available for users.

For example, in GameFi, it is a standard procedure for a player to put a few items together to generate a new one with a certain probability. The fact that one player makes a sword from three stones is essentially to generate an NFT with a return in probability by combining three PRCs. This fundamental logic holds if one switches to a game to make a dinosaur from three eggs. Regardless of any gaming application, this generation procedure can be treated as putting three PRCs together and computing the expected return.

The birth of PRC is one small step for Fort but a giant leap for crypto. PRC goes beyond a lottery and makes a basic tool for the DeFi, NFT and GameFi ecosystems. It is confident that PRC will keep surprising the on-chain ecosystem.

Right now, we are distributing PRC by a series of free airdrops for everyone (Check the details via Fort official Twitter). Come to win the DCUs ASAP. Good luck!