The shortlist of games that have been nominated for the GAM3 Awards 2022 have been released. Sixteen categories are featured in the inaugural edition of Polkastarter Gaming’s GAM3 Awards, taking place on Dec. 15, 2022.

The first round of voting put forward 106 distinctive games across 13 categories for the jury members to choose their top five from each. This process narrowed down the final nominees to 32 unique games, representing the best of the best in Web3 gaming.

The initial 106 games spanned 13 chains, with the top three networks being Polygon, BNB Chain and Solana. The spread of Web3 games across different chains carried over to the final 32 nominees. Polygon and ImmutableX are tied with eight games holding the torch of Web3 gaming for them, while Solana and Gala come in second and third place, respectively. 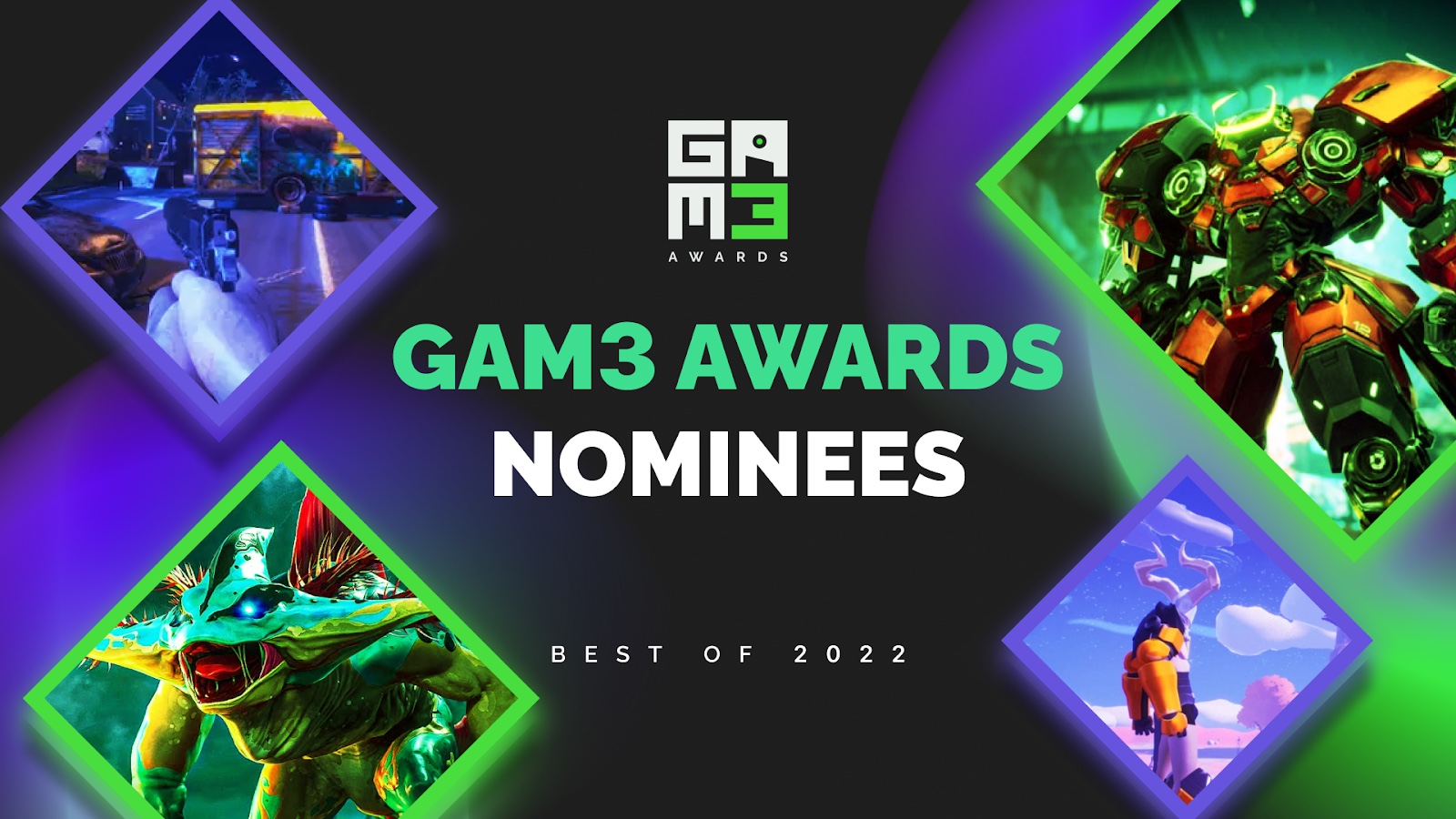 GAM3 also gives recognition to the best content creator. Content creators are the main drivers of adoption and the ones who rally their loyal communities behind them. The list of content creators in Web3 gaming is long and spans across various regions, cultures and languages. That’s why the Best Content Creator award will be 100% community-voted for each to send their fans to vote for them to win the award on the GAM3 site.

The Games’ Choice Award is where game recognizes game, but in a more literal sense of the phrase. The 15th category in the GAM3 Awards is where each game nominates its favorite Web3 title outside of itself. It acts as a sign of respect and shows that games within the space are all in a friendly competition to push the Web3 gaming industry together.

The People’s Choice Award opened its doors for community voting on Nov. 16. This is the only game-specific GAM3 Award that is 100% decided by community voting, and it sparked a movement within games of all genres and from all chains. Thirty-eight games shared tweets and announcements with their respective communities, with a combined social following of more than 3 million. This process alone qualified over 50 games for the award, tallied from over 5,000 unique votes submitted on the platform.

The GAM3 Awards’ Game of the Year nominees are proof of how far Web3 gaming has evolved. Five of the best games in the industry are continuously blurring the lines between the quality of traditional and Web3 gaming while promoting the power of digital asset ownership and other blockchain elements: Big Time, Illuvium, The Harvest, Gods Unchained and Superior. For any of these projects, winning the GOTY title will be a result of the game studio’s dedication, hard work and effort to build an undivided community. 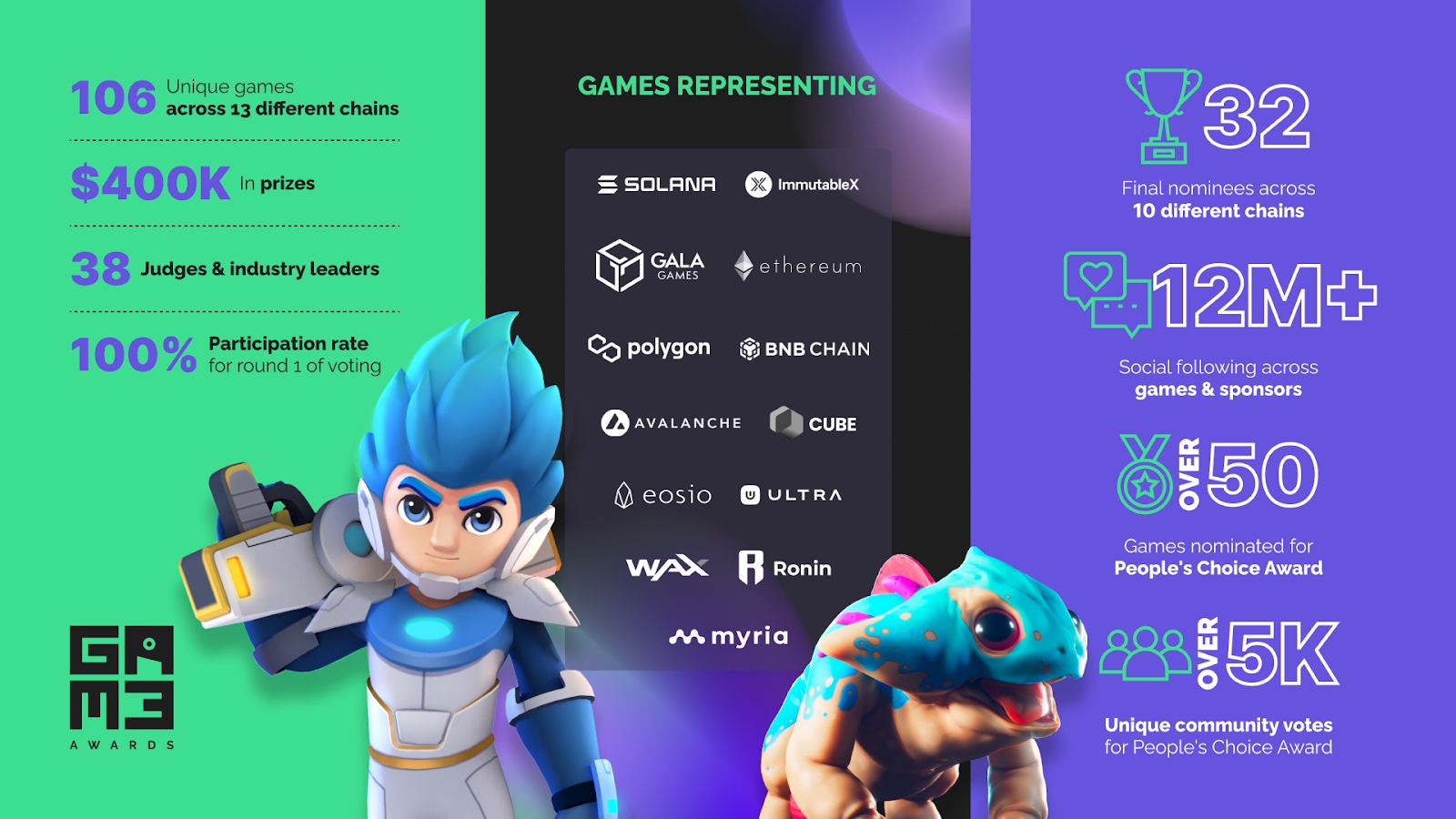 Games will be judged based on multiple criteria including core loop, graphics, accessibility, replayability factor, fun elements and overall gameplay experience. To be eligible for any of the awards except Most Anticipated Game, the game in question must have a live, playable version that showcases the aforementioned criteria.

An all-star jury with decades of gaming experience includes former Square Enix chief technology officer Yoshihisa Hashimoto, who directed Sonic: Unleashed and Final Fantasy XIV, and Edward Chang, former senior director of partnerships at Electronic Arts. The full list of jury members voting in the GAM3 Awards as well as the full list of nominees are up on the site.

Judges whose votes will determine which studios walk away with a prize include Justin Kan, founder of Fractal; Urvit Goel, head of global games at Polygon Studios; Itai Elizur, managing partner at Market Across; Rachel Levin, director of venture and strategy at ImmutableX; and Matt Sorg, head of technology at Solana Foundation.

The jury’s vote will carry 90% weight, with the remaining 10% decided by community voting. The community will be the deciding factor if there is a tie, and their vote will have an influence on deciding the winners of all categories, which will be announced on Dec. 15 during GAM3 Awards’s livestream across all social platforms.

GAM3 Awards 2022 is the inaugural edition of the annual Web3 gaming awards. Hosted by Polkastarter Gaming — Polkastarter’s first step at reimagining the future of blockchain gaming — the awards celebrate the highest-quality Web3 games. The event boasts industry leaders, ecosystems and media outlets, and rewards the top game developers with monetary prizes and services valued at over $300,000.