GameFi: The new golden child of the cryptoverse

GameFi tokens are creating a buzz within the crypto industry, and the LBank exchange is dedicating funds to its development.

Following the popularity of decentralized finance (DeFi) and nonfungible tokens (NFT), GameFi has entered the show as blockchain’s next big thing. According to Google Trends data, global search volume for GameFi has soared above 100% in five months, gaining traction not only within the blockchain community but also in the gaming and finance worlds.

GameFi is a hybrid of blockchain gaming and DeFi, changing the gaming industry with play-to-earn (P2E) models that differ from traditional pay-to-win models.

With traditional games, you pay for an advantage, such as equipment or power-ups. P2E games offer players the promise of financial gain by giving them rewards that can be translated into real-life assets while also providing them with a wide range of appealing activities.

The new generation of cryptocurrency advocates is young, and many are avid gamers. GameFi appears to be the next logical step in blockchain development. Users seize character cards and land in games in the form of NFTs, with everything stored on public blockchains — no more counterfeiting or limited access to your own gaming assets. Blockchain technology makes ownership easy to prove and the transfer of assets restriction-free. Parts of DeFi, such as staking, are also incorporated in GameFi. Users can store their tokens and gain annual interest or secret rewards.

Enhance your profile while earning blockchain-secured tokens that can’t be taken away by game creators. This might sound like science fiction, but with the development of blockchain technology, it’s already a reality.

Recognizing the potential for this field, LBank is paving the way for GameFi projects by dedicating funds to their development.

LBank is one of the leading cryptocurrency exchange platforms focused on startup cryptocurrency projects. After the DeFi and NFT trends, LBank is now expanding its business model to the GameFi community. The platform has established a dedicated GameFi fund in order to support early-stage projects and extend their influence in the blockchain space. Many projects listed on LBank have already surged in popularity. Below are a few notable winners. 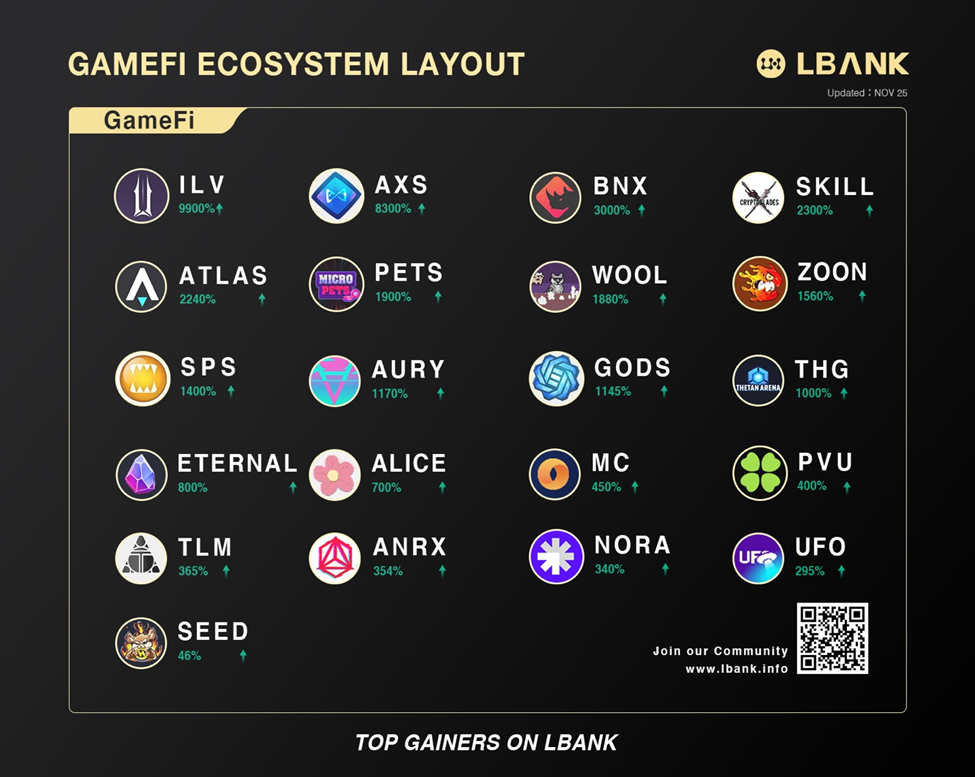 Star Atlas is a multi-genre, immersive, metaverse gaming experience on the Solana blockchain that blends a cinematic gaming experience with the potential to earn virtual goods that can be transferred for real-world currency. At the time of launch, ATLAS, the game’s token, was trading at $0.078, with its steepest increase reaching 1,282,000% at one point.

CryptoMines is a SciFi P2E NFT game that allows players to acquire workers and spaceships to travel through the universe in pursuit of ETERNAL, the in-game cryptocurrency. The game operates on the Binance Smart Chain. Eternal was trading for $40 at the time of launch on LBank. Its highest gain was 12,400%.

The ILV token is the primary currency in the Illuvium ecosystem and is used to reward players for their achievements in the game. It is also used to participate in the governance of the game via the Illuvium decentralized autonomous organization (DAO) and entitles players to their portion of the Illuvium vault DAO. It is another popular token that was listed on LBank in March 2020. At the time of launch, it was trading at around $15 and, since then, has increased 9,900%.

Axie Infinity is a blockchain-based trade-and-battle game in which participants own and run a portion of the company. The game was inspired by Pokémon, and users can breed and train their Axies to fight against other players. AXS is the first popular coin that was launched amid the hype in gaming assets. At the time of launch, it was trading at $2 and, eventually, registered a gain of 8,300%.

The future of GameFi

What sets GameFi apart is the potential of the financial freedom it offers. Instead of gaming and letting game developers rake in your earnings, blockchain incentivizes users by paying them for their time. Tokens and NFTs give financial power back to the users, giving them more reasons to remain in the decentralized universe.

From anywhere on the planet, a user can game, win, and cash their digital assets in real life. This gives anyone with a computer and internet access the potential to make a living online. This freedom has, until now, been reserved for only a limited group of people.

As NFTs and DeFi become increasingly mainstream, so will GameFi. Significant support is needed to drive the evolution and growth of this early-stage hybrid creation. Only with the concerted effort of users, exchanges and communities can its development lead to greater things that could enhance our lives both in the near future and beyond.

Founded in 2015, LBank Exchange is an innovative global trading platform for various crypto assets. It provides its users with safe crypto trading, specialized financial derivatives and professional asset management services. It has become one of the most popular and trusted crypto trading platforms, with over 6.4 million users in more than 210 countries worldwide.

Visit us on social media: